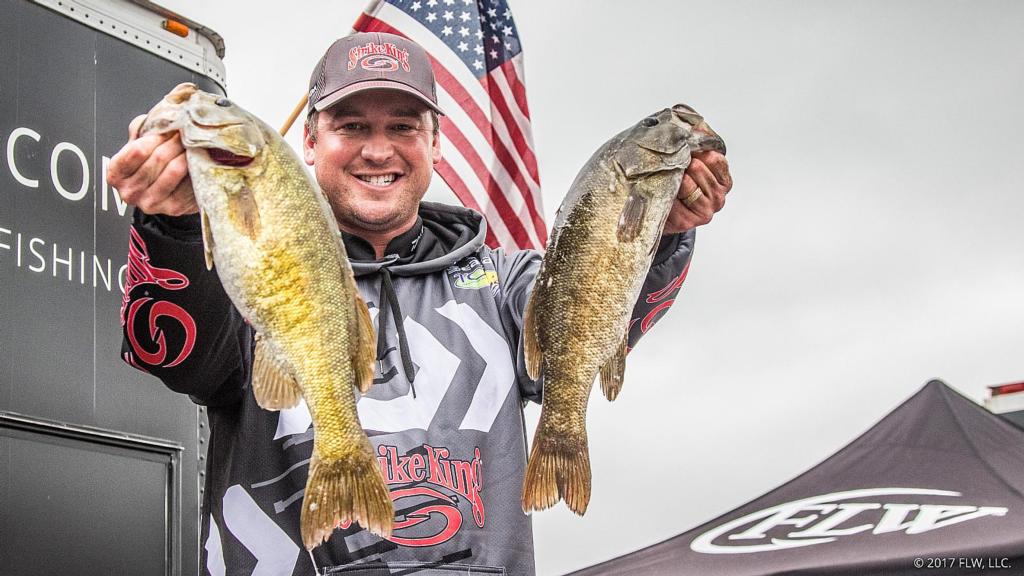 It can never be easy at Beaver Lake. At least, that’s the track record for this lake over the course of its 20-year history as an FLW Tour destination. Beaver is notorious for its up-and-down fishing conditions, and the pros who’ve been lucky enough to lead at Beaver on day one frequently end up falling out of the cut on day two.

Today, day-one leader Cody Meyer thought he might experience the typical Beaver Lake flip-flop, but he was able to maintain his spot atop the standings in the FLW Tour presented by General Tire despite an overall drop in production. Meyer caught 16 pounds, 1 ounce on day one to lead by just 6 ounces over runner-up Chris Brasher. He followed up on day two with a 12-pound, 8-ounce limit and now has a 3-ounce lead over Texan Jason Reyes going into the weekend.

Though the slip cost Meyer a few ounces off his “cushion,” he says he’s not surprised at the stumble. After all, that’s just what happens at Beaver Lake in a typical year, and this time is tougher than normal due to a water-level rise of about 9 feet in the last week.

Meyer caught his day-one limit by targeting smallmouths as deep as 40 feet on a gravel bar off the side of a sunken island top. He says he got lucky to catch those and, because he had only the one smallmouth spot, didn’t expect to repeat with a big brown-fish catch today. 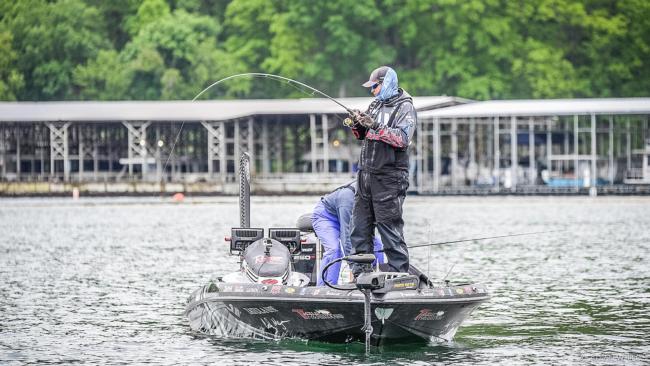 “I started on the same spot where I caught the majority of my fish yesterday,” he says. “I caught a limit, but it was a lot tougher. Actually, it was about the same as yesterday, but the size of fish went down.”

Meyer had a limit in the boat at about 10 a.m. then ran to a place where he’d spied a smallmouth on a bed on Sunday’s first practice round. At that time, the fish was about 5 feet deep. He says he pitched to the area where he believed the bed was – now 9 feet deeper – and was surprised to catch a quality largemouth that rode with him to weigh-in.

Lucky breaks like that are what it often takes to win at Beaver Lake, where a 3-pounder can be worth tens of thousands in earnings.

After that, Meyer ran around trying to piece together a flipping bite by targeting “sawdust” mats – flooded debris – in the backs of pockets, but only managed one keeper that way. He ended the day camping in the Prairie Creek area where the tournament takeoffs and weigh-ins are happening this week. 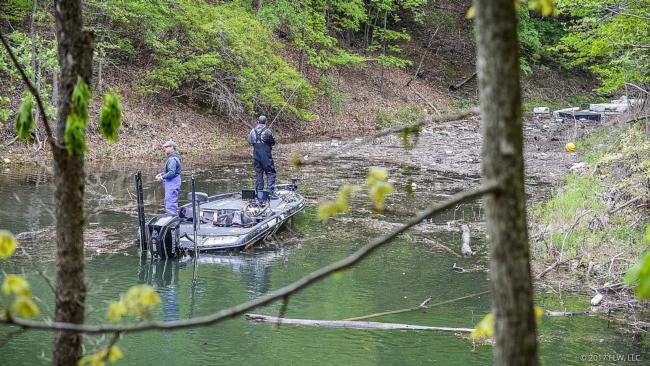 Looking forward to the weekend, Meyer thinks the deep smallmouth spot is probably washed up.

“I thought yesterday that I wouldn’t get a bite there today,” he says. “The chances of getting another limit are pretty slim. If I could get two bites off it tomorrow that’d be great.”

Meyer says he has no back-up spotted bass pattern, which is usually part of his game plan at Beaver, and he hasn’t really figured out how to catch shallow largemouths consistently, even though he’s weighed in a couple this week. He thinks his best bet to win is to camp in the community hole at Prairie Creek where most local tournaments release their fish. Meyer has earned a lot of money catching release fish in Prairie Creek over the years and hopes to earn $125,000 more by doing it again Saturday and Sunday. He believes the right quality fish are there to win it.

“I do because there are enough big ones,” he says. “There’s definitely not as many fish in here, or maybe there are but they aren’t biting. But this place you have to take a day at a time.”

Tomorrow’s forecast is for heavy rains and thunderstorms, so staying close to takeoff to start the morning might be a smart move. Then again, trying to predict what will happen in the next two days is pointless. With even more runoff flowing into the lake, Meyer and the rest of the top 20 can expect the unexpected on Saturday, which is to say they can expect Beaver Lake to be anything but easy – just like usual.

Meyer in action on day one