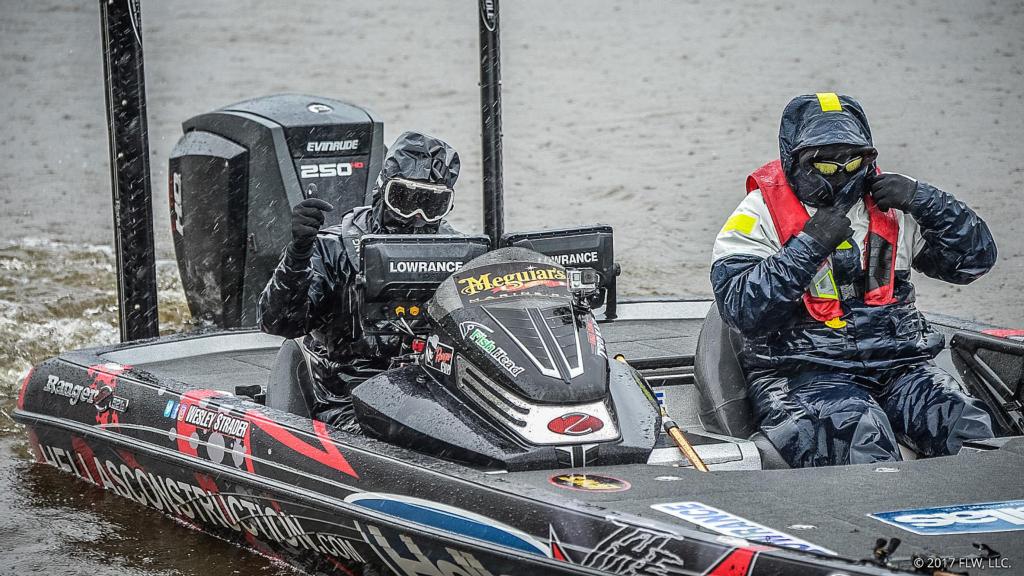 Get to know the Mississippi

We’re calling the blog for the day. The pros are due back in at 3:15, so there’s still time, but it’s getting down there. Weigh-in should be pretty good – the weather is supposed to finally break and it’s going to be tight and full of fish as usual.

Clark Reehm is still down in Pool 9 and the lockmaster says it will be an hour until he can get through. He’s going to be cutting weigh-in awfully close. That said, he hasn’t done enough to make the top 10 today so it probably won’t matter either way. Of course, he will want to get back and out of the rain at some point.

Bryan Schmitt just added a 3+ to his limit and it seems like that will push him slightly ahead of Morgan. Also, the updates on the blog will likely be pretty sporadic from here on out. It’s pouring and the transition from Pool 9 to Pool 8 was a very effective way to shake off our coverage.

It’s been pouring all day, but Bryan Schmitt has persevered and just culled three times in about 10 minutes. Unofficially, we’ve got him over 13 pounds, and he may have as much as 14 pounds. That flurry jumps him right back up to second, where he started the day. 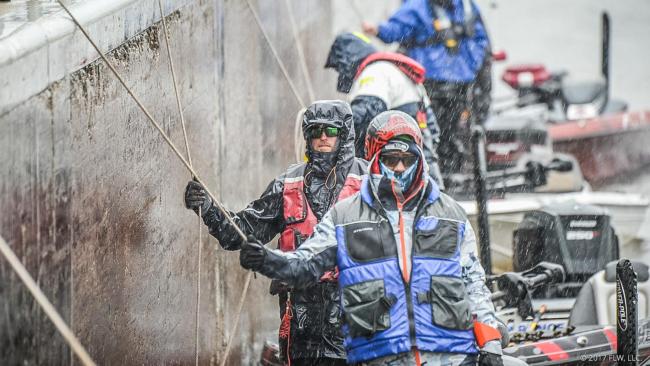 12:40 We think everyone is going to make it back

It looks like everyone in Pool 9 has made it back through the lock. So, hopefully there aren’t any issues on that side of things this afternoon. 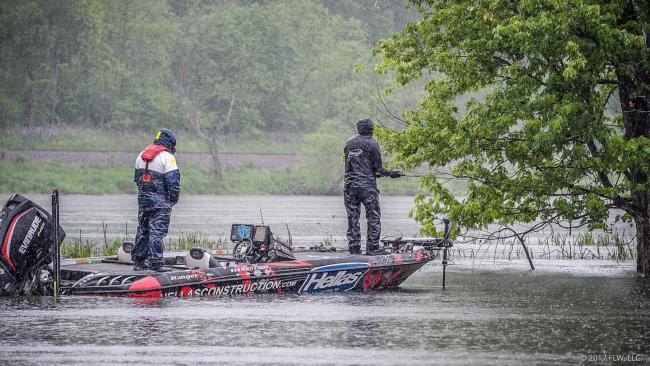 Wesley Strader has four fish for about 10 pounds.

Jimmy Houston just dropped his fifth keeper in the livewell. He’s got a small limit, but a limit nonetheless. 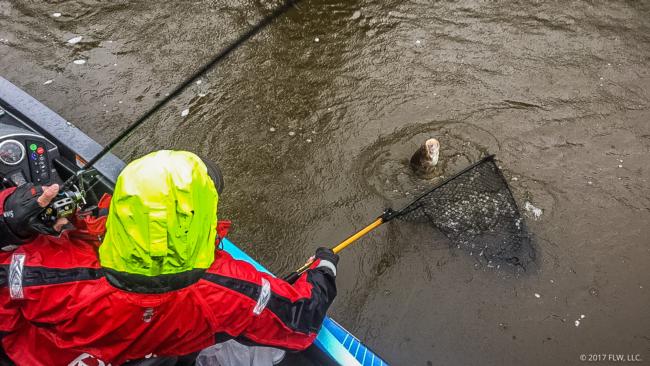 Larry Nixon and Joey Cifuentes have been toiling in terrible service all day, but they both have good limits. In particular, Nixon has 13+ and has moved well up into the top 10.

Boats are starting to cue up at the lock at the top of Pool 9, and it looks like Andy Morgan, Cifuentes, Nixon and Strader will all be heading back toward Pool 8 a little early.

Bryan Schmitt just solidified his limit with a 3-pounder. He’s really staying on the moving/grass bite and keeping away from the smallmouths and wood so many others are targeting.

Andy Morgan just checked his phone and then split off for the lock. There are two barges on the way and he wants to beat them to the punch. Per a buddy of a buddy who knows the lockmaster, the pros in Pool 9 apparently have about 30 minutes left before it’s going to be barge city up at the lock. The pros aren’t due back until past 3 o’clock this afternoon, so they might not be thinking about locking quite yet. Stay tuned for potential heartbreak.

Matt Stefan just made a big cull, replacing a little smallmouth with a 3-pounder. That brings his limit up past 11 pounds.

Josh Weaver has made a nice move up the leaderboard today, but he’s stalled out since the morning. Weaver is still catching with some consistency, but his last four keepers have all been small and no help.

Wesley Strader got fixed up pretty quick and is down and fishing in Pool 9, but we haven’t gotten an update on the catching from him. We’ve got a camera headed his way shortly, so hopefully we’ll get some clarity on him soon.

Jim Moulton just finished out his limit with a solid keeper and now has about 9 pounds in the livewell. Doing better than that, Justin Atkins recently culled and has more than 12 pounds in the ‘well. He seems primed to move from 17th into the top 10 for the final day. 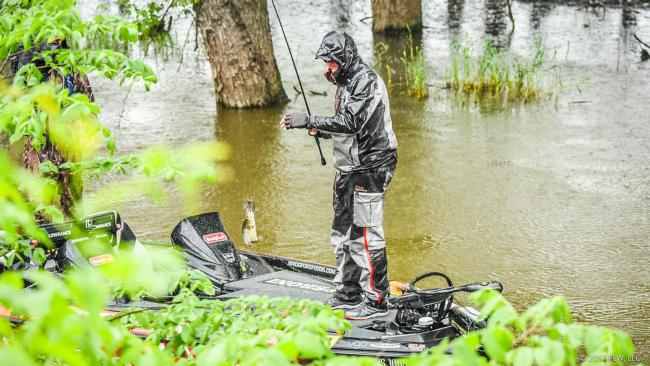 Matt Stefan seems to have gotten into a good area. He’s been blind-fishing for bedding smallmouths all day, and just landed a 2-pounder to cull out a real dink. That’ll get him up to about 40 pounds for a total, which keeps him in the bottom half of the top 10 for now. 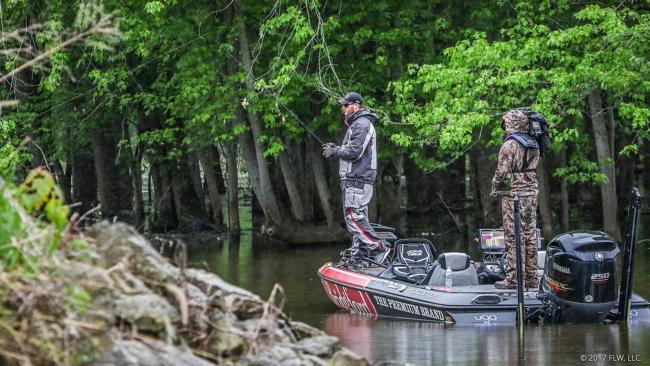 Matt Stefan just filled out his limit with a decent keeper. It’s not a huge limit, but it’s good to keep him up in the top 10 for now and a testament to his ability to be consistent on the river.

Andy Morgan swapped out a decent smallmouth for a decenter largemouth a few minutes ago to cull up to right about 13 pounds. He lost the lead (unofficially) to Josh Weaver for a while, but he’s now over 44 pounds by our estimate and back in the driver’s seat. 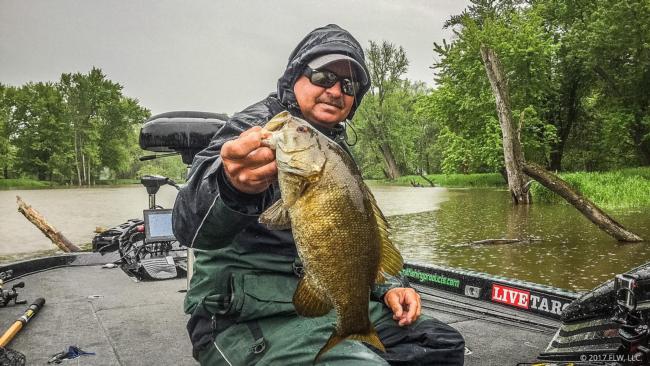 Todd Auten finished his limit a while ago with another solid 2+ bass. He’s got a mix of species and more than 12 pounds now.

Jeff Sprague has had a rough morning. He’s gotten plenty of bites and is flipping trees, just like Andy Morgan, but they’re either too small or he’s missing them. Sprague has actually missed the last four bites he’s had, which it not what you want on day three of an FLW Tour event.

Morgan in action on day two

Bryan Schmitt just made a small cull up and seems to be dialing things in a little more as the day goes on. He’s fishing offshore grass with moving stuff and certainly seems at home.

Alex Davis just lost a 4-pounder that would have been a very slick way to fill out his limit. Had he landed it, he’d probably be looking good for making the top 10 cut.

Alex Davis has a trio of decent smallmouths in the boat now. Down in 9, Austin Felix just culled up slightly with an additional smallmouth. 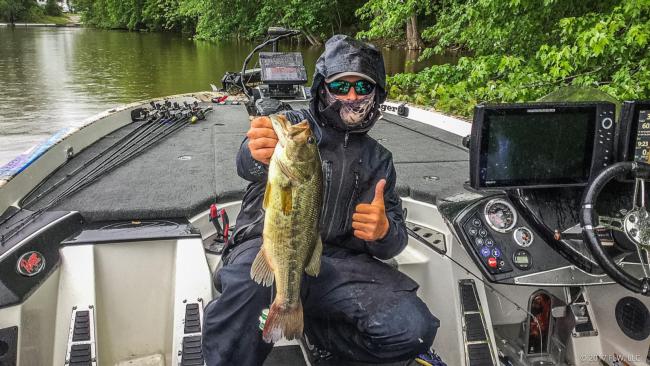 Justin Atkins landed a nice 3-pounder for his third fish. He’s got some decent quality so far today – if he can fill out his limit with a few good ones he’ll be in business.

David Dudley just filled out his limit with another solid 2-pounder. He’s got more than 12 pounds in the boat now and is one of three pros across the 40-pound mark. 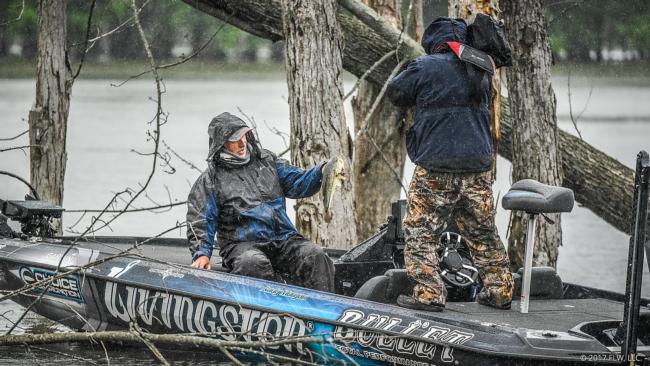 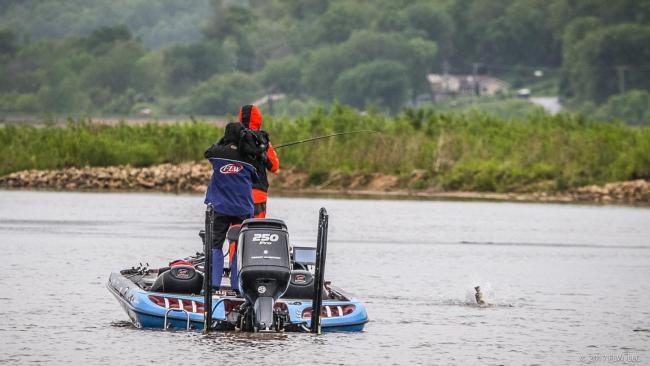 Bryan Schmitt just filled out his limit with a solid 2-pounder. Austin Felix just popped a smaller keeper smallmouth for his fourth of the morning. 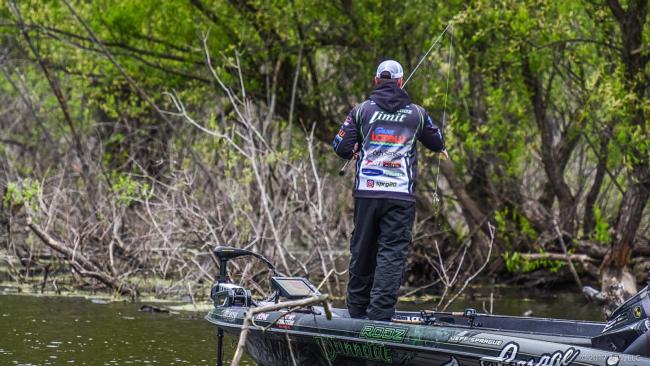 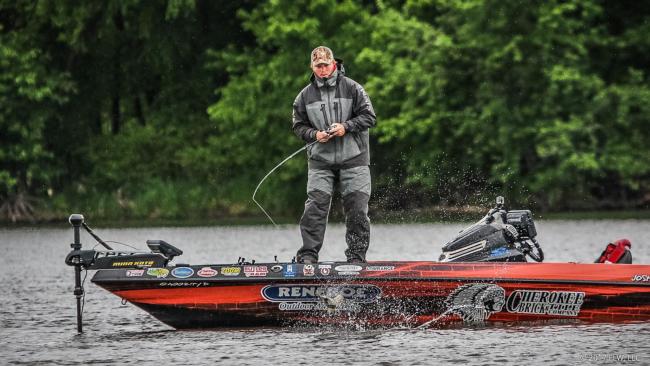 8:15 Weaver is cooking, Morgan has three

Josh Weaver is having himself a morning. He’s caught six keepers so far and already has more than 13 pounds in the boat.

Andy Morgan is getting going now as well. He just landed his second and third keepers – all decent smallmouths.

Larry Nixon is cranking a squarebill and has caught four 2-pounders so far. Jim Moulton just boxed up his first keeper on a wacky rig. 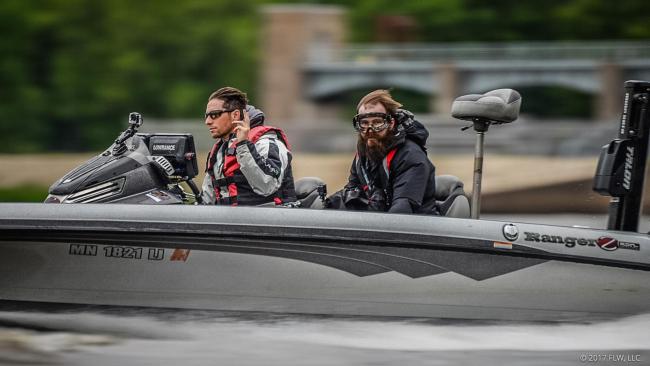 Austin Felix has caught all smallmouth so far, and they probably all came off beds. He’s fishing blind, but he knows what he’s looking for. 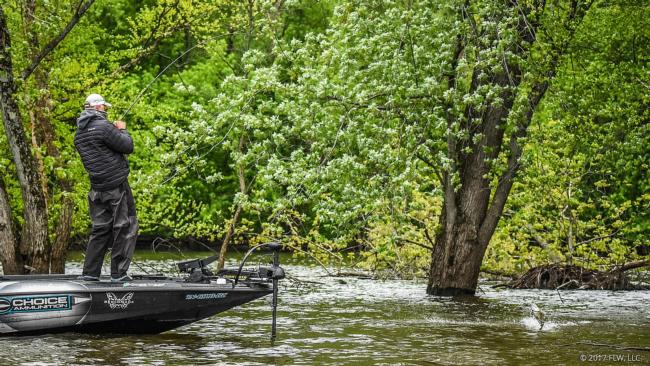 Andy Morgan is on the board now. He just flipped up a 2-pound smallie to get going.

Minnesota pro Austin Felix has two in the boat now, and his second is a quality 3-pounder, followed shortly by a 2-pounder. He’s on the right pace for sure. Up in 8, Todd Auten got on the board with a 2-pound largemouth.

The rain has moved in now as well. It’s not strong, but it’s supposed to be pretty steady. 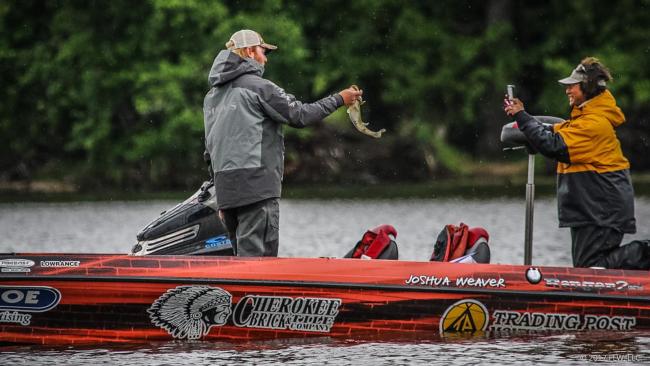 Josh Weaver got off to a great start, boxing up a keeper and then a 4-pounder to rocket into the lead. He’s been putting it together day by day this week, and he seems to have a bit of an aptitude for the ol’ Mississippi.

Austin Felix, the former FLW College Fishing National Champion, just popped a 2-pound smallmouth in the boat down in Pool 9. Up in 8, David Dudley just added his second 2-pounder of the morning. Also in 8, Scott Martin just landed a 3-pound largemouth to start things off.

David Dudley and Matt Arey are both off to good starts, quickly landing a 2-pounder each to get on the board.

Wesley Strader broke down on his way down to the lock into Pool 9. The service crew is on the way, but he’s going to lose some fishing time for sure. 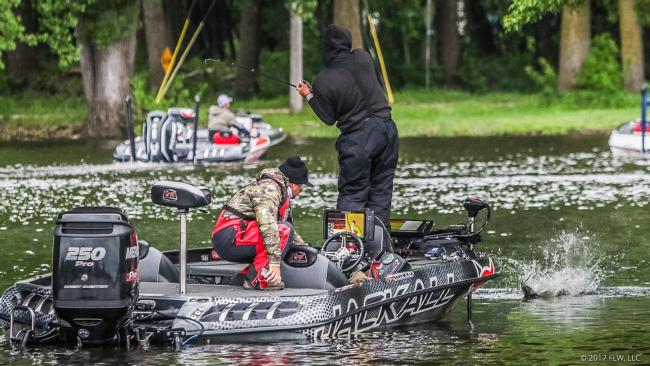 Bryan Schmitt has added another keeper about the same size to his creel. Alex Davis is also on the board now with a 2-pounder. 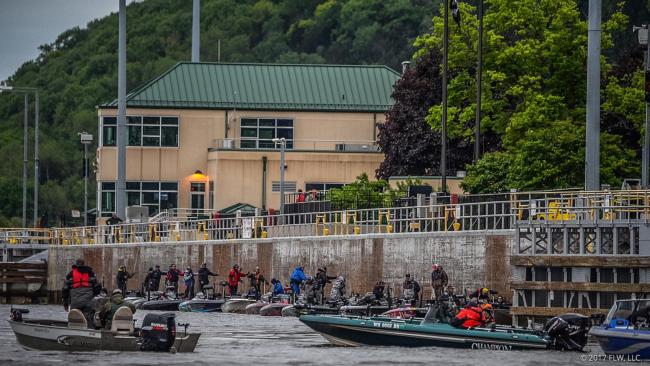 Everyone in Pool 8 is fishing now, and the folks headed to Pool 9 are all in the lock. Up in Pool 8, Bryan Schmitt just got on the board with a solid keeper to start things off. 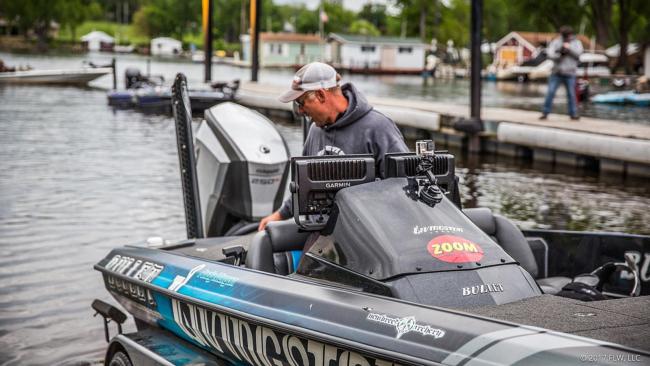 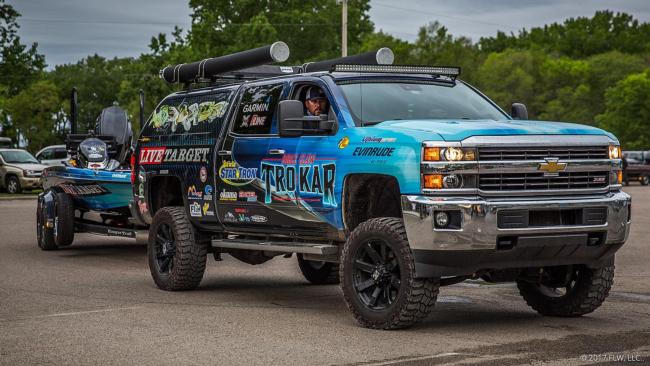 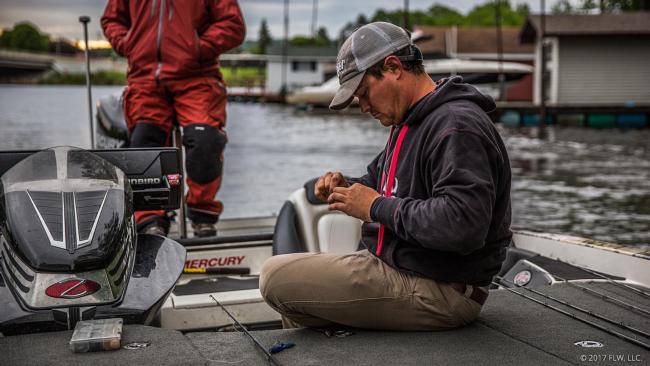 Having a chance to win is no strange thing for Andy Morgan. The Tennessee pro has made a habit of fishing all four days throughout his career, and you don’t win three Angler of the Year titles by scuffling along. Nonetheless, the veteran pro has only managed one Tour victory throughout his illustrious career. This weekend, in the FLW Tour presented by Evinrude on the Mississippi River, Morgan has a chance to double that total.

The Mississippi has fished well this week, despite an onslaught of rising water, cold weather and heavy rain. Even so, the top six have all averaged 15 pounds per day and there is but a hair separating first from 20th. In this tournament, more than any others, it seems like it anyone’s game.

Though pros are fishing in all three pools they’re allowed to (7, 8 and 9), most of the top anglers are locking down the river into Pool 9. It’s not a terribly long run, but the threat of barges at the lock adds an extra element of risk that has to be factored in.

All in all, regardless of the rain in the forecast, today should be a fun one on the water. FLW Live starts at 8:30 a.m. CT, Andy Morgan is leading and everyone has a chance with how tight the weights are.

Format: All pros and co-anglers will compete for two days. The co-angler champion will be crowned on day two, and the field will be cut to the top 20 pros on day three and the top 10 pros on day four. The winners will be determined by total cumulative weight.