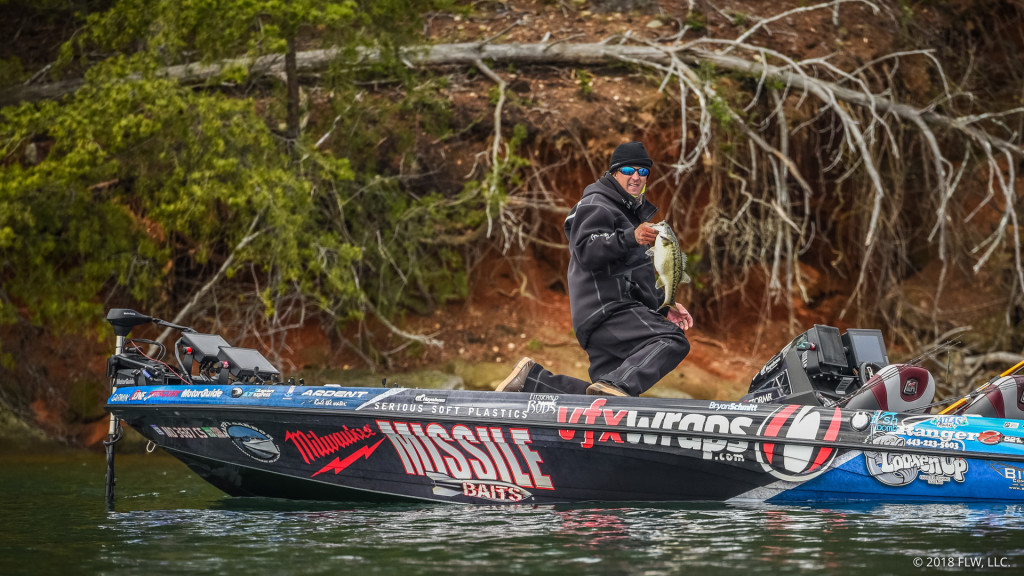 Georgia’s Lake Lanier is touted as one of the best spotted bass fisheries in the country. It certainly showcased that Thursday on day one of the FLW Tour presented by Ranger on Lake Lanier.

Despite strong winds and a dip in temperature, it took just less than 18 pounds to make the top 10, with two anglers cracking 20 pounds. Bradley Hallman leads the way with an epic 23-pound, 11-ounce bag of spots.

Yet, while spotted bass proved to be the best bet for most anglers, a few did capitalize on some key largemouths to catapult them into the top 5. 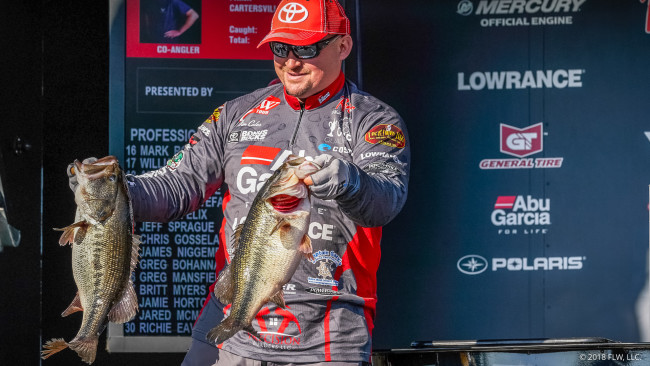 Two docks produced two huge fish for Cales, and he feels they have far more under them. Even more noteworthy, both bigguns were largemouths.

On Thursday Cales boxed up a quick limit of spots in the mid-section of the lake before heading to his special docks around noon, feeling the largemouths might take a little bit longer to get active.

“First cast, I had two 5-pounders come out after my bait,” Cales said. “I hooked up one, but it came off. So I left it for a bit, came back and caught a 5-pounder. Then I went to the other dock. First cast, nothing. Second cast, 7-pounder.”

While Cales is excited to have these two special docks, he’s also concerned he only has two docks. Hence, he spent a lot of time after that looking around for docks in the same type of cove.

“I need to look for more docks,” says Cales, who plans to spend all night scanning his mapping chips. “That’s my game plan right now.” 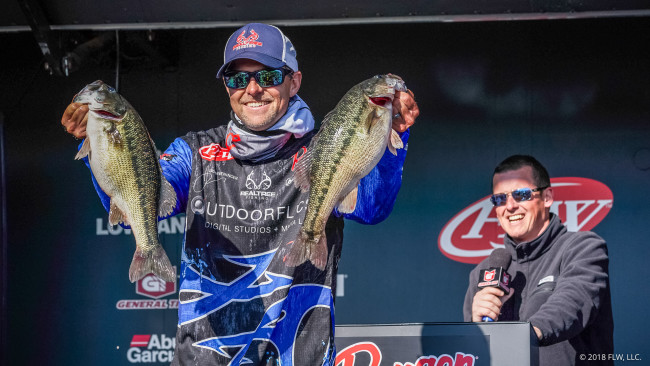 He may currently live in Florida, but for a long time Meninger was a local stick on Lanier. That background helped him immensely on Thursday.

While a strong dock bite presented itself in practice, Meninger knew from experience it wouldn’t hold, at least not on day one with the conditions. Thus, he completely ditched the docks for suspending fish around deeper structure. Yet, as the conditions changed and became sunnier and windier throughout the day, so did Meninger’s approach. And he figures his approach will completely change tomorrow.

“With how it’s warming up and the sun, tomorrow will be completely different,” Meninger says. “I may start on some of the deep stuff I fished today, but eventually I’ll change to something else I know really well and am excited about.”

Haynes is one of the best offshore fishermen in the world. Few anglers understand structure, timing and everything else that goes into catching fish from the depths better than he. Of course, Haynes’ knowledge is usually best served in the stained waters of the Tennessee River impoundments rather than Lanier’s gin-clear lower end.

But evidently, offshore is offshore, at least for Haynes.

The pro says he “played the conditions” on Thursday, which meant hitting upwards of 60 spots.

“Just playing the wind, time of day, the conditions,” says Haynes, who only caught 9 keepers.

With the conditions looking to change every day of the tournament, Haynes says he’ll continue to change with the day, though his run-and-gun pattern seems like it will be staying. 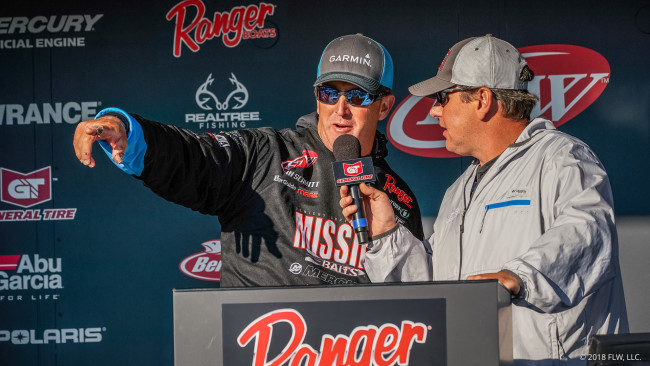 As unlikely as it is to see Hallman leading, it might be equally unlikely to see Schmitt in the top 5, as he’s a power angler who typically loves grass. Fortunately, Schmitt also loves fishing for smallmouths, and he took a cue from them and rode it to a great first day.

“I’m fishing similarly to how I would fish for smallmouth,” says Schmitt, who hit between 20-25 areas on Thursday. “Once I caught one big spot during practice doing what I’m doing it all made sense. What I’m doing makes sense when you look at the conditions.”

Schmitt said a big key for his bite is the sun, which is forecast to shine brightly all day Friday.

“If the conditions line up like they’re supposed to hopefully I’ll be able to duplicate today,” Schmitt says.