They're biting again on Cumberland 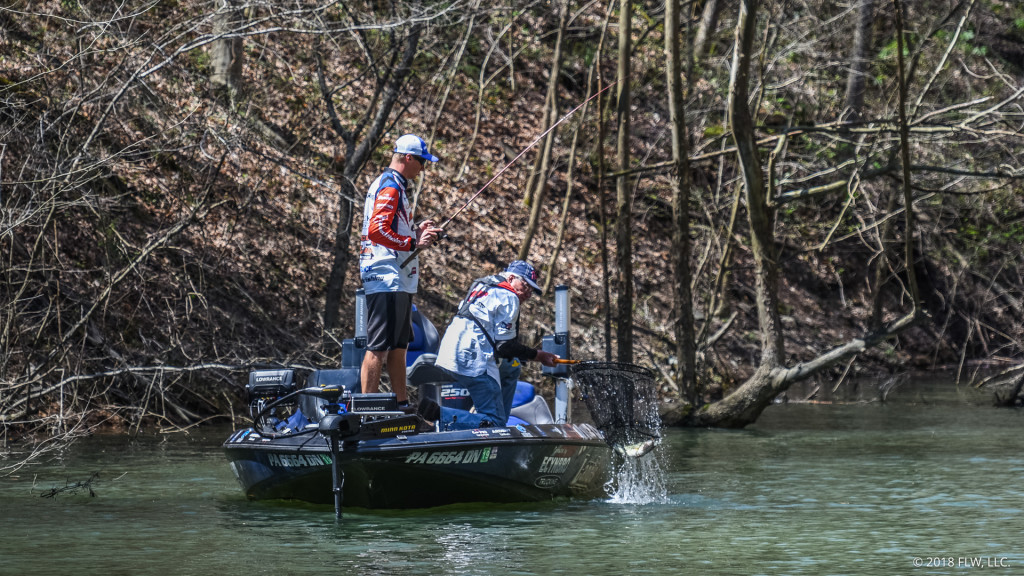 We’re pretty much all getting off and rolling toward weigh-in now, and considering how windy it is, many pros are doing the same. Weigh-in starts at 3 p.m. ET, and it should be pretty interesting, as there’s a solid chance we’ll have a new leader and the battle to make the top 30-cut will be pretty fierce. One additional thing to watch for is Bryan Thrift – if he brings in a limit he’ll own the consecutive limits record.

One last update – Josh Douglas has a limit for about 10 pounds.

Jason Lambert took his time doing it, but he just filled out a limit with a fat smallmouth. He’s got about 11 pounds in the ‘well.

Jamie Horton has checked in with a limit for not much. He’s in the back of Fishing Creek and chunking a spinnerbait. 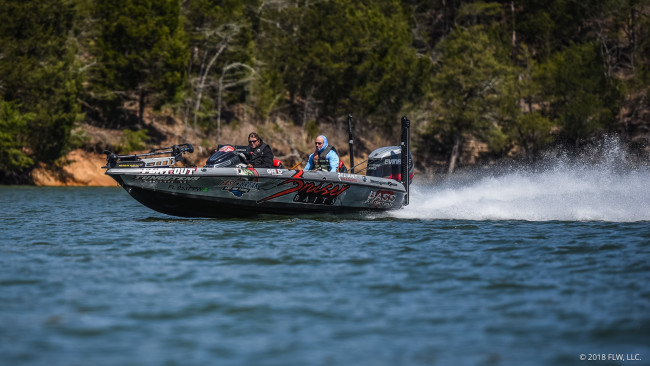 Back in Beaver, Jared McMillan has just three in the box. He’s gonna take a tumble in the standings after today, but his day one will almost certainly be enough to keep him in the AOY lead.

Scott Martin has been soaking pretty much the same stretch all day and has rustled up four keepers so far. He’s definitely not as in tune with the lake as he was in 2017, but there’s time left for a cut-making rally.

Meanwhile, Grae Buck just finished his limit with a 2-pounder. Deep in Beaver Creek, Chris Gosselaar has five – one is a 3-pounder but the rest aren’t much.

Grae Buck is scuffling for sure today. He’s sitting on just four fish now and none of them are special. Evan Barnes has his limit now and says he’s got about 11 pounds. One more cull and he may make the cut.

As Chris McCall gave us his rundown he mentioned, “I’ve been searching for a brown one for two days."

Well, he found one! The Texas pro just culled up to the 15-pound range with a 4-pound smallmouth. As you would expect, he was chucking a blade when we were with him.

Richard Lowitzki and Chris Neau each have four fish in the boat with a few good ones mixed in. 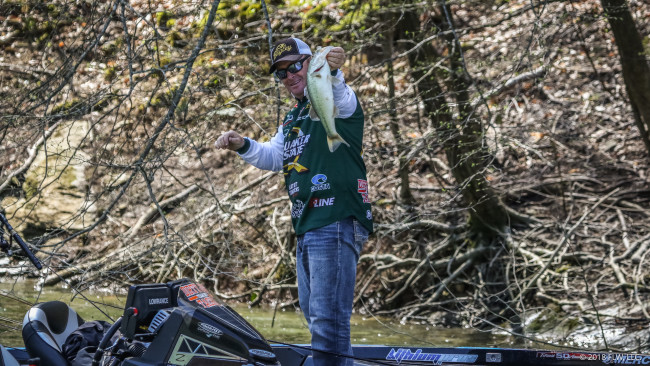 “Bet I’ll get a nice one here in a minute,” said Scott Canterbury as we rolled up on him. Nonetheless, the veteran instantly smacks a three pounder, which made a cull. Clearly, Scott is fishing with confidence at the moment.

After finishing day one in second place Florida pro Jason Meninger was hoping to get on a strong morning bite. However, it didn’t quite click as he only has two fish to show. Now the Florida pro is making a 7-mile run to test new waters. 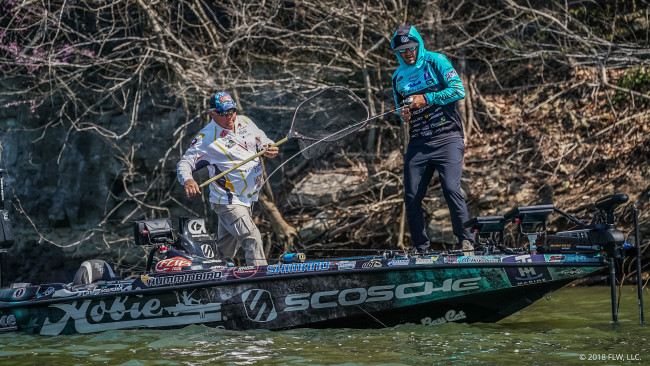 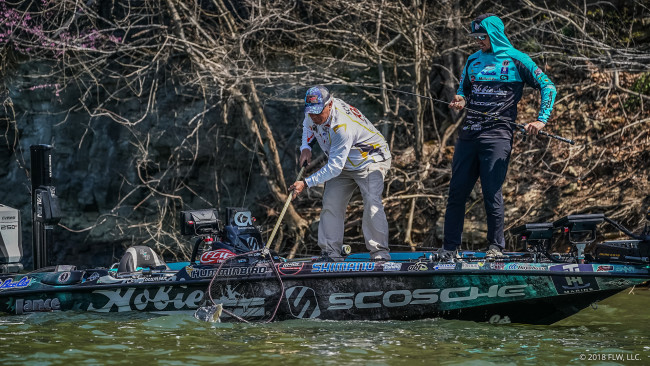 David Wootton only has two fish in the box, but one is a chunk.

Carl Jocumsen has somewhere around 12 pounds. He currently has the Cumberland hat-trick with three smallmouths, one largemouth and a spot. The Australian pro will need to cull the spot if he wants to make the top-30 cut.

We’ve got word that Nick Gainey and his co-angler Josh Ford each have five fish in the boat and now are looking for a kicker largemouth. Also Shane LeHew, Brandon Cobb and Rusty Trancygier have their limits but need to upgrade.

Andy Morgan just landed a keeper back in his pocket. Unfortunately, this one didn’t make its way to the livewell.

Elsewhere, Cody Kelly has three small fish in the box. All three coming on spinnerbaits.

Andy Morgan just missed another tank smallmouth. The GOAT is definitely around some solid fish. Hopefully he can manage to put a few more in the box before the day is over.

Rob Jordan has two in the box. Jeff Sprague says he’s got a limit for about 6 pounds. Jason Meninger was at a marina a little bit ago looking for oil, but we didn’t get an update. That said, we should be able to chase down the second-place pro shortly for some info. 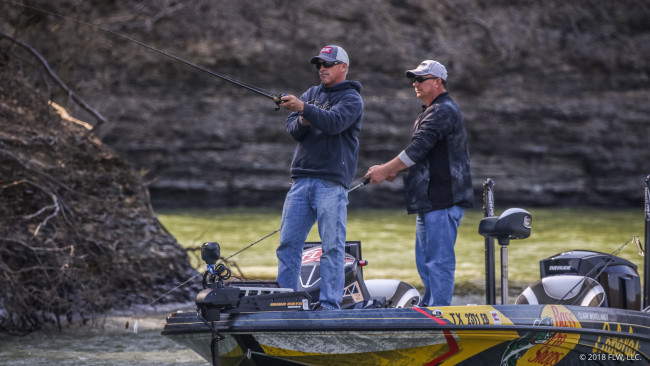 Scott Wiley has rustled up a limit. He thinks he’s got about 11 pounds. Clark Wendlandt only has three, and we think they are all small, but it’s getting really windy and hard to communicate now. 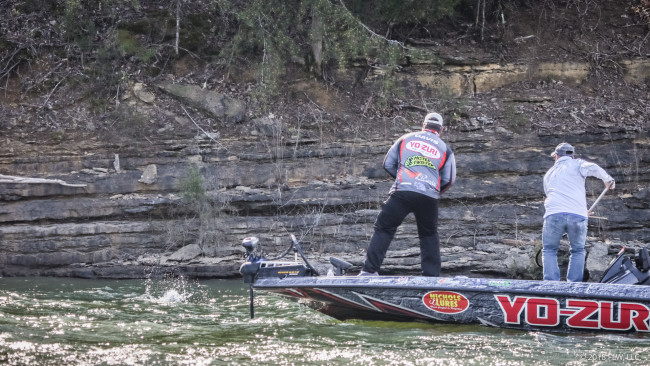 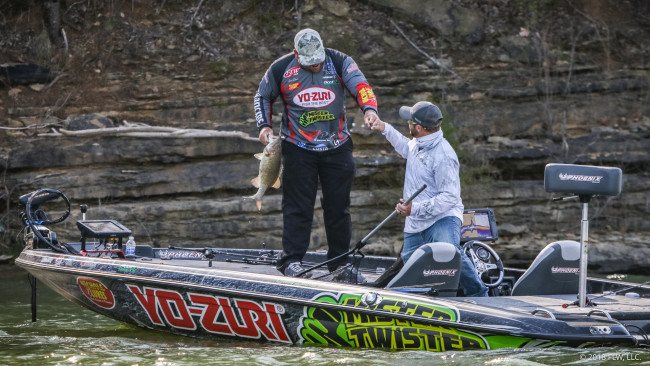 Aaron Britt and Clent Davis are doing some serious culling. Britt rolled into a spot with about 10 pounds and has just culled three times to get up past 13 pounds. Meanwhile, Davis just popped a 4.5 smallmouth and is into the teens as well. 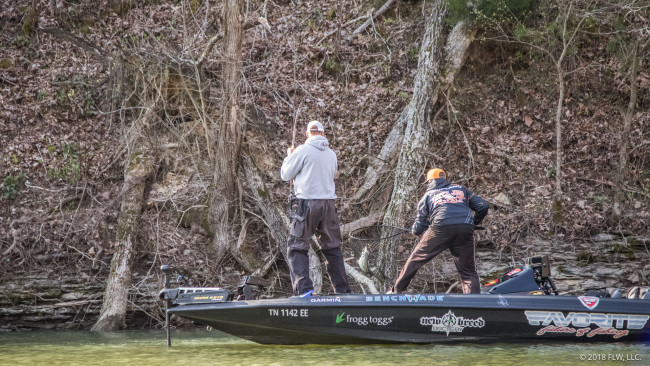 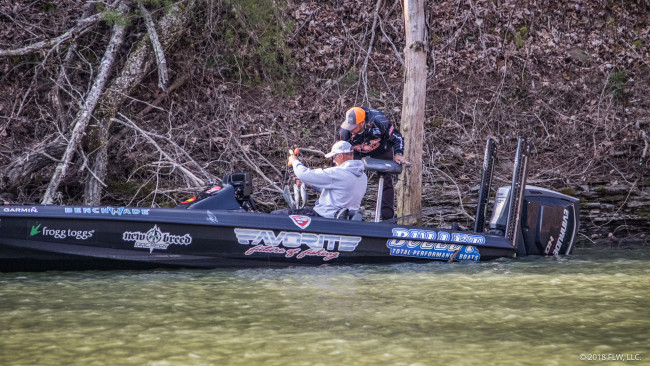 Andy Morgan has culled twice to get up past 11 pounds. He’s catching spotted bass left and right on his spinnerbait at the moment. 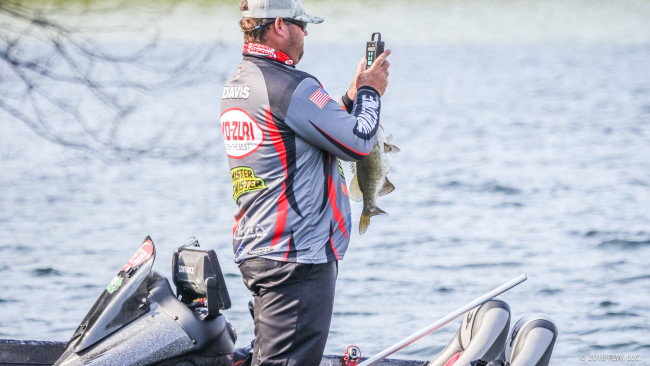 Clent Davis just wrapped a limit with a 3-pounder. He’s got more than 10 pounds in the boat now.

9:43 More for Davis and Morgan

Clent Davis just caught a decent smallie for his fourth. Andy Morgan just culled with a smallmouth, but he didn’t gain all that much. 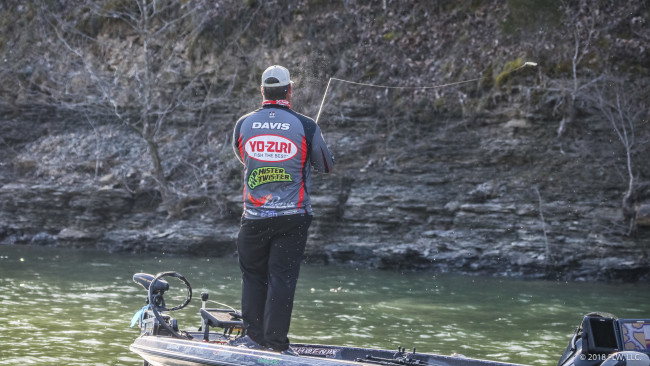 9:40 Davis with three decent ones, Cortiana on pace

Clent Davis has three for about 7 pounds so far. He’s fishing points and seems primed to make his first cut since his return to the FLW Tour.

Down the lake, Kyle Cortiana has a limit for 10 pounds already. He’s finally having a good tournament, and it sure looks like he’ll be fishing the weekend.

Craig Rozema just popped his fifth keeper in the boat. He’s got a Cumberland slam that goes about 11 pounds now. 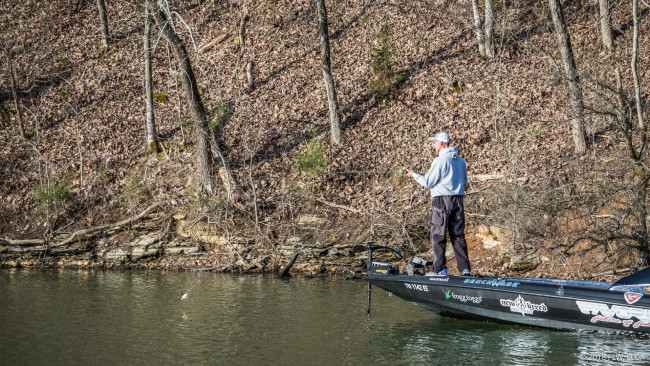 Andy Morgan has missed three good fish on a spinnerbait so far this morning.

“I put a trailer hook on, which I’m gonna be cussin’ here real soon,” says Morgan. “But I done lost three in this pocket.”

He says the fish are smashing the bait, but not really eating it. He just had a big smallmouth follow his blade up, and he figures that’s what they are. Of course, there’s no love lost between Morgan and smallmouths, so that’s about par for the course.

Through it all, Morgan has still managed to wrap up a small limit with a keeper largemouth. We figure he's got aobut 10 pounds. 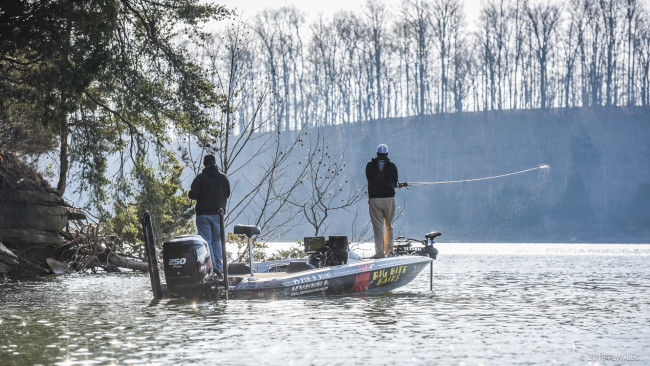 Michael Neal got off to a good start on day one, but says he didn’t catch a fish after 11 o’clock. He’s nervous now because he hasn’t managed a keeper yet. He's been throwing a spinnerbait, but he just put it down and picked up a spinning rod. 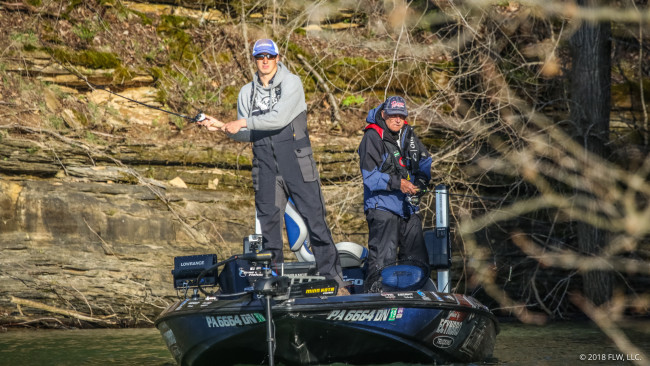 9:15 Slow for Buck and McMillan

Grae Buck and Jared McMillan have both started slowly and are currently fishless. J-Mac is moving out of his primary area a little earlier than he did on day one and appears to be a little flustered.

Also, Morgan just lost another good one on the spinnerbait. 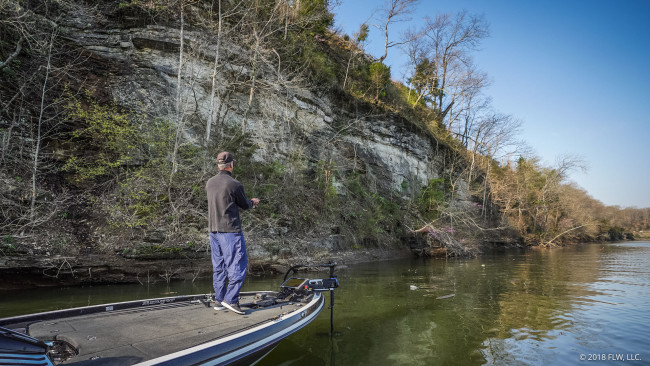 9:04 Add one for Morgan, Rozema is rolling

Andy Morgan just popped a skipper into the boat for No. 4. He’s got a long way to go to get back to what he caught one day one.

Craig Rozema worked up 14 pounds on day one, and he’s got four for about 10 pounds already today. He’s fishing the same stretch of bank he did early yesterday and is throwing finesse stuff.

Andy Morgan just bowed up for a minute and then lost whatever he had hooked. He says it was a ”nice one.”

Joe Thompson barely scraped up 8 pounds on day one, but he’s got more than that already today. He’s culled twice and seems to be on quite a few fish. 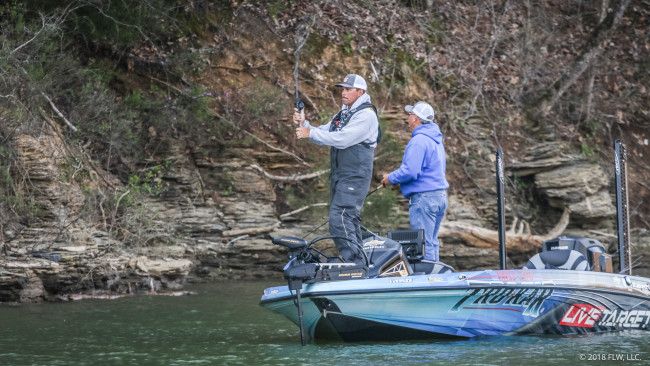 8:49 Nothing for Martin early

Scott Martin isn’t on the board yet, but he’s fishing a pocket where he caught a 4-pounder and a 5-pounder yesterday. He says the water is cooler than it was on day one because the south wind blew the pocket out and it has back-filled with cold water from down deep.

Cody Kelley headed out in 130th today, but things could be looking up. He’s got two keepers in the boat to start things out. 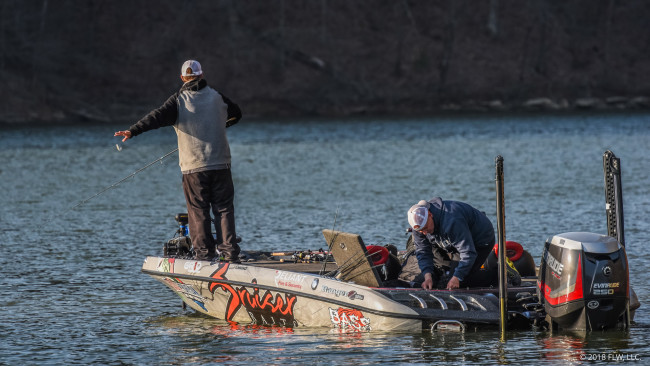 Aaron Britt and Jared McMillan both have nothing so far. McMillan has lost his first two bites, so he’s less than happy at the moment.

Andy Morgan has a smallmouth and a pair of spotted bass in the ‘well early, but he says he needs to cull them all. He caught them all on a spinnerbait. 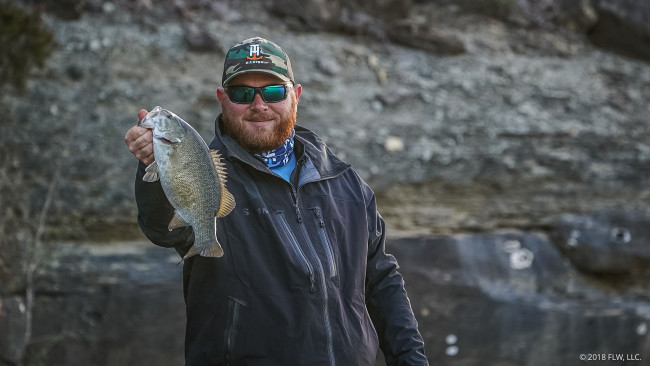 Jason Johnson caught a 3-pound brownie to get going and to get the blog going. JJ started the day in 98th, but if he can catch a few more good smallies he may be able to improve that. 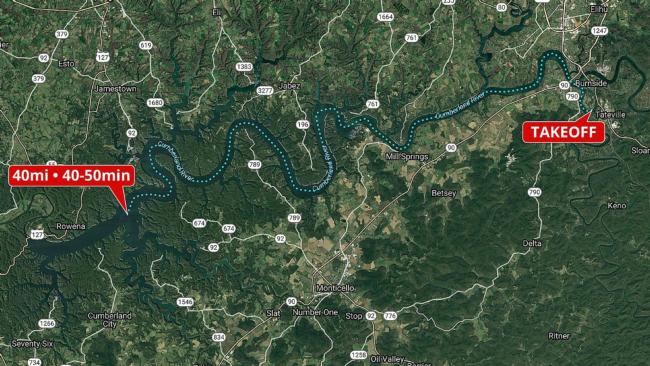 As is usually the case on Cumberland, a lot of the field is fishing down the lake. Though the wind will probably keep a lot of the floaters pinned to the bank, it’s still a pretty solid run down to where many folks are fishing. With that in mind, we’ll have a longer than usual gap between takeoff and when updates start rolling in hot and heavy. 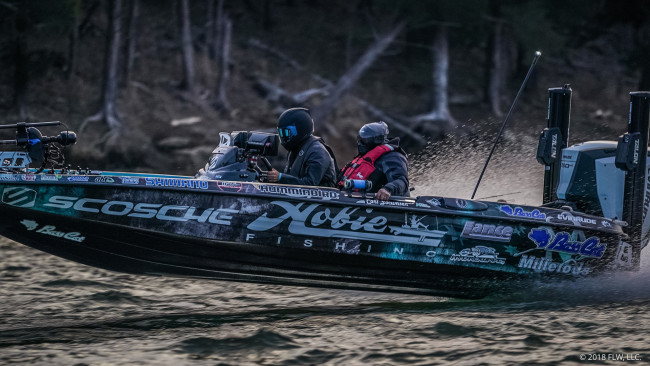 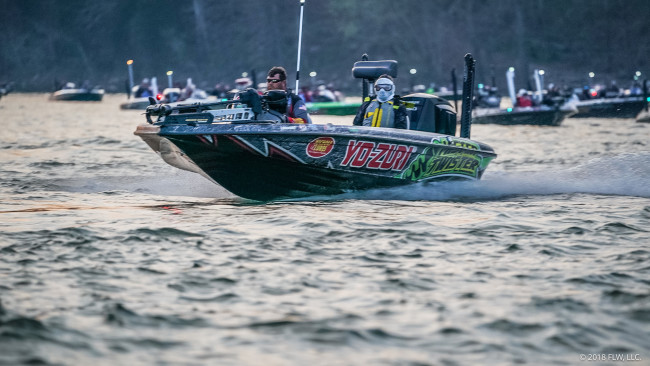 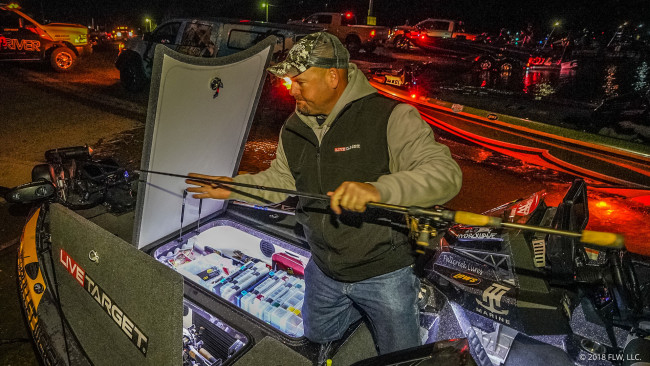 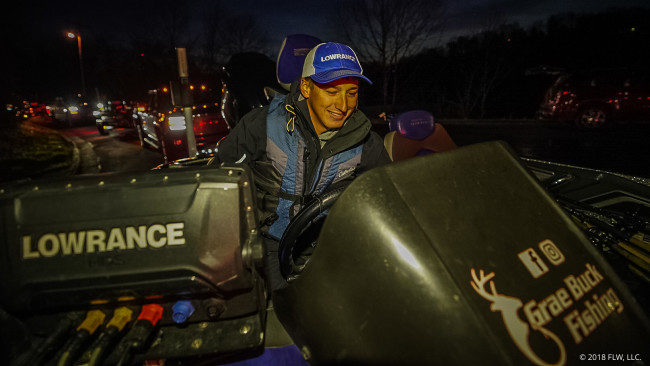 7:00 Morgan leads the way into a new day

Things just feel right when Andy Morgan is catching fish. Day one of the FLW Tour presented by General Tire on Lake Cumberland wasn’t the slugfest that some predicted, but it did produce plenty of bags in the mid-teens. Morgan topped everyone with 18-15, and it sure seems like he should contend the rest of the way.

Outside of the actual fishing, which we’ll get to, the main storyline is the absolute roll that Jared McMillan is on. While reigning Pennzoil Marine Angler of the Year Bryan Thrift quietly tied Cody Meyer for the consecutive limits streak and sits in 13th, J-Mac sacked 16-12 and sits in fourth. Fishing his first full year on Tour, McMillan has transitioned from a hot start in Florida to a serious and unexpected run at the AOY in the blink of an eye. Additionally, all his closest competitors had pretty tough days, but Brandon McMillan did well – we could see the McMillan boys sitting one-two in the standings come Sunday afternoon.

Cumberland offered a lot of variety on day one, and she figures to do the same today. With the big warm-up continuing (shorts were a common sight at takeoff this morning), the fish should get even closer to spawning, despite continually dropping water levels. This has been the biggest spinnerbait tournament in recent memory, and they’ll catch a ton of fish again today, but finesse stuff is getting a workout too. Though largemouths don’t seem to actually be on beds in many places, there are some smallmouths spawning deeper that should continue to play.

Day one turned out to be very windy and warm, and that’s likely to be the case again today, especially later on. There are plenty of places to duck out of the wind, but it does pose some navigational problems on the lower end or in the more open and straight areas. On the other hand, the wind definitely offers opportunity – plenty of fish were caught on windblown points and the like on day one.

GoPro highlights from day one