Haynes and Lambert are duking it out on the ledges 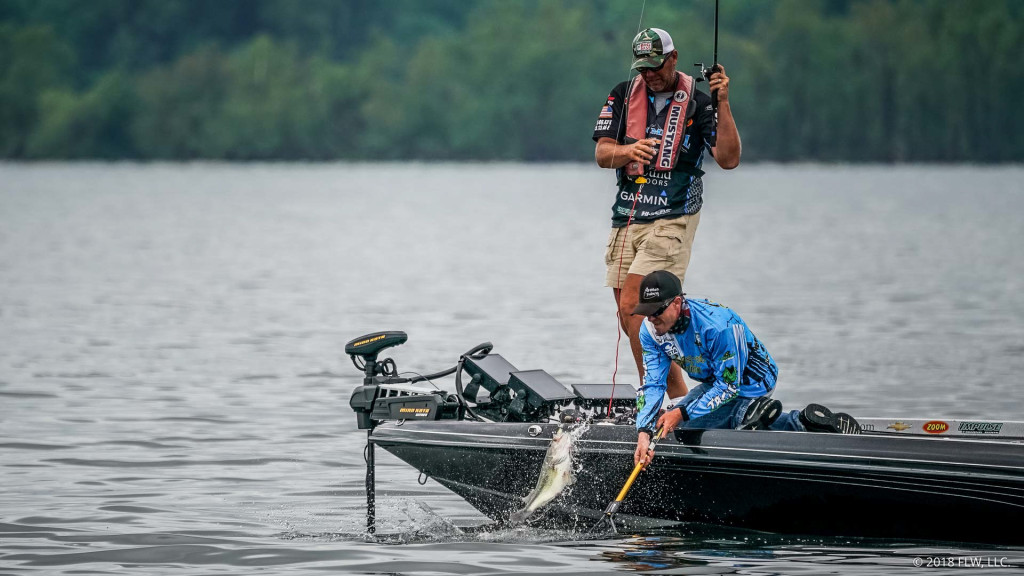 With random patches of rain menacing our crew the reports have slowed down some. Check back at 3 p.m. CST to see how the weigh-in shakes out – were bound to have a few surprise bags cross the stage.

Well, the decision to stay payed off for Randy Haynes as he just boxed a 4 1/2-pounder. That brings him up to at least 17 pounds – likely more.

We have word that Josh Douglas has boated 17 pounds so far. He is still camped on his juice down towards Paris, Tenn.

Right now, the conditions are prime for the ledge bite to completely take over. The sunlight mixed with calm winds should have the bass positioned in easy spots for anglers to catch them as the day progresses.

Joseph Webster now has his limit for about 14 pounds. Again, much of his weight coming off of a shallow-offshore bar.

Haynes wants to leave his spot to find bigger fish but says he can when he is sitting on a 30-40 fish school.

Austin Felix just shook off a 5 pounder. He is still at three fish for 11 pounds.

Tyler Stewart now has a limit that weighs around 12 pounds. He was dragging a worm on a ledge. A cull or two would for sure have him fishing tomorrow.

Jeff Gustafson is having himself a day on Kentucky Lake's ledges. A cull just brought the Canadian pro up to the 16-pound range.

Curtis Richardson is up shallow fishing docks with no success. He says the brighter skies of this afternoon may help push more fish up on tight cover.

Haynes keeps catching fish and making small culls. He and other ledge guys are finding their rhythm.

Bradley Hallman is having a much slower day than what he had yesterday. The Oklahoma pro only has two fish for 6 pounds. 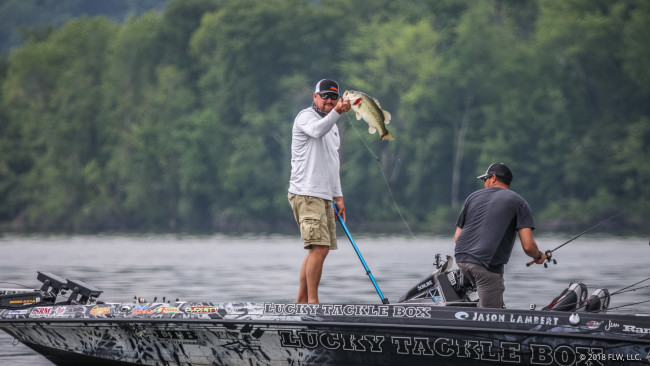 Things just turned on for Jason Lambert in a big way. Dragging a worm south of Paris, Tenn. he just landed what is estimated to be a 19-pound limit, which includes a 7 pounder. Now he is looking to upgrade on a few 2 1/2-pounders that he still has in his livewell.

11:28 Dudley with smalls, Hays with four

David Dudley has three fish in the boat that are all small. Luckily, he had an 18-pound, 5-ounce limit yesterday which will help his odds of making the cut.

Dylan Hays has mustered up four fish that go around 12 pounds. Another keeper should put him in the top 30 for tomorrow. 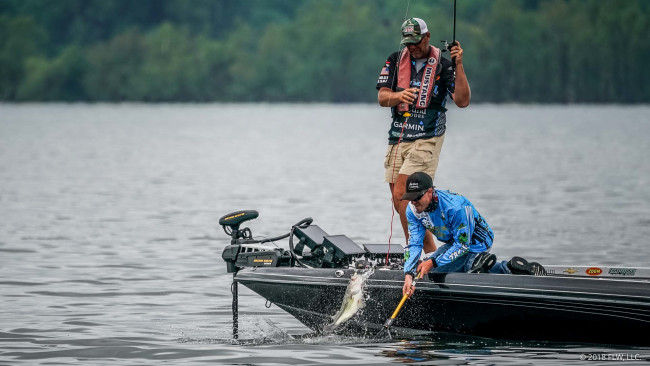 Finally! Randy Haynes just caught No. 5 which appeared to be a 2 pounder. This was the smallest of the last three fish Haynes has boated. He claims he has around 11 pounds – most likely an underestimation.

John Voyles has four fish for 9 pounds so far today. He says that he is still looking for a kicker. Right now he is alternating between a Carolina rig and a jig.

Austin Felix has three fish for around 11 pounds total. If he can complete his limit with a few more good ones he may find himself on FLW Live tomorrow morning.

John Hunter weighed in 17-1 yesterday but currently has zero. 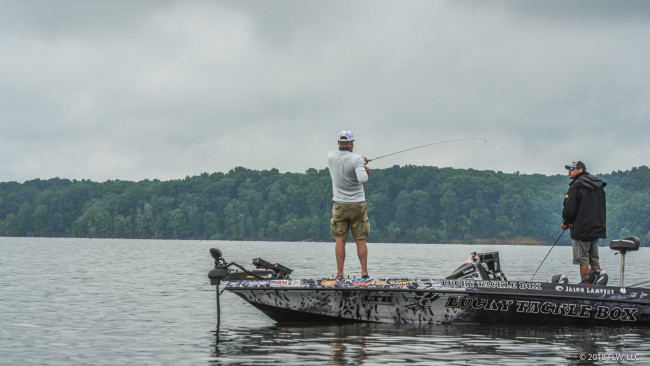 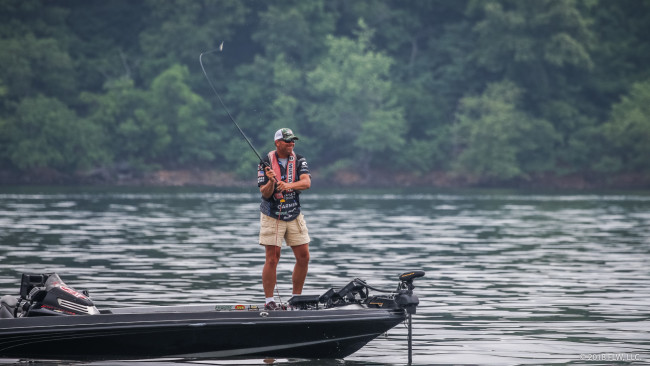 Lambert boxed his first keeper of the day – a 2 pounder.

Haynes just caught two more fish and is looking dialed in on an active school.

Jim Moulton and Craig Rozema each have one fish in the 4-5-pound range. 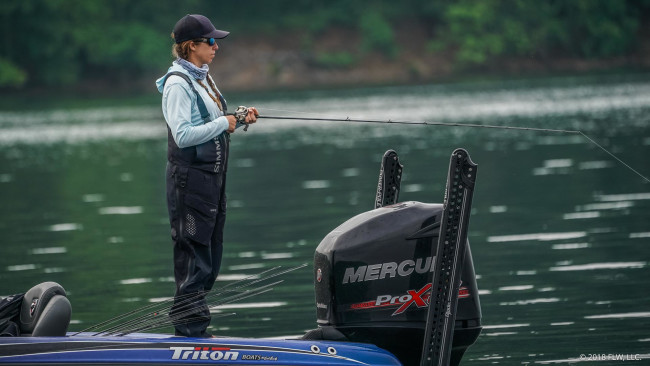 Cody Hahner had himself a solid day yesterday with a 14-pound, 3-ounce limit but now finds himself with zero. An afternoon flurry would be ideal for the rookie who entered today in 38th place. Hahner's co-angler Melinda Hays has a nice 3 1/2-pounder. 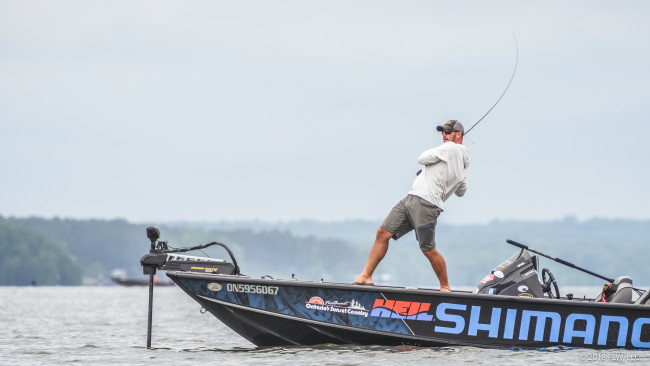 Keeper No. 5 is in the boat for Gussy. Now he has around 14 pounds in the livewell. We certainly could be seeing more of Gussy tomorrow.

Gussy has four keepers so far and is currently working a large jig offshore. The Canadian pro says if he catches number five he has done his job this week.

Kentucky Lake is not treating the reigning Pennzoil Marine AOY Bryan Thrift all that well today. He is still working on catching five keepers, which would put him at 57 straight Tour-level limits.

Despite being one of the favorites heading into the event, Mark Rose has been a little lost on Kentucky Lake. With only two keepers in the box he says that he’s making a move to his good spot, which he has yet to find.

Matt Arey has three small fish that will go around 8 pounds. Unfortunately, he will be docked 4 ounces do to one of his keepers dying.

Alex Davis has a limit around 21 pounds. That will put him in cut range this afternoon.

Timmy Thompkins has a small limit. In order to make the cut the South Carolina pro will a few afternoon culls.

Tom Redington checked several ledge spots in the main lake below Blood River and never found what he was looking for. He left for parts unknown without even wetting a line. Still no keepers for him.

Dylan Hays landed his second 2 1/2-pounder of the day. That's a fair start for him.

Evan Barnes, Brad Knight, Jeff Dobson and Joey Cifuentes all started off fishing docks in the Blood River, a large tributary near the Kentucky/Tennessee border. They're not having much luck. There's so much cloud cover that the fish seem to be dispersed and not holding to cover. They all left for greener pastures on the main lake. 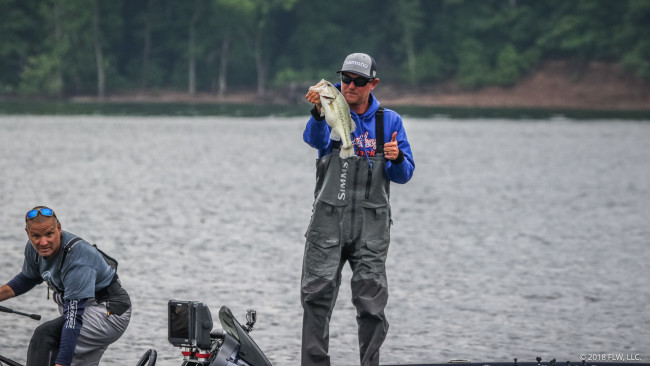 9:13 Douglas with another, Haynes and Lambert miss

Slinging a big swimbait Josh Douglas just boxed his third keeper of the morning. If his spot keeps producing he should have another solid bag by the end of the day.

Haynes and Lambert each just missed fish. They will need to find a way to connect with the limited amount of bites they are getting. 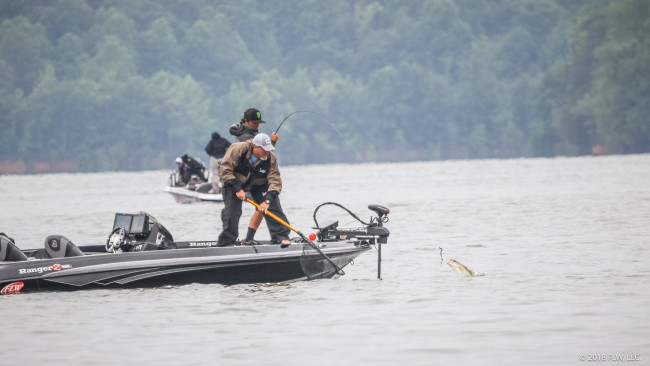 Rookie pro Tyler Stewart is back on his spot from yesterday and has one fish so far.

Haynes is finally giving his original spot a break. He is currently idling nearby looking for a different school of fish.

David Larson has a few fish that total around 7 pounds.

Lambert has checked out nearly 20 spots so far this morning with nothing to show. Finding active fish has clearly been an issue for him. 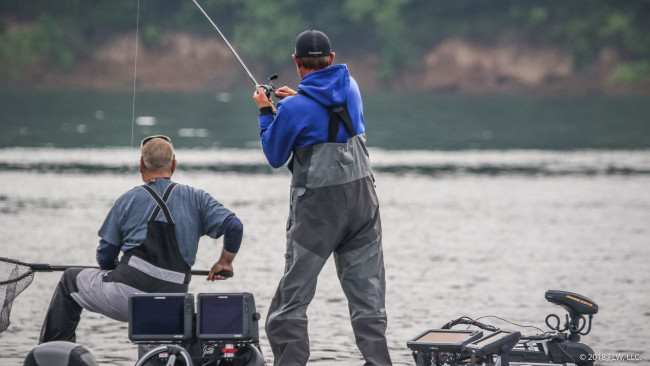 Grae Buck has two small fish in the livewell. He will need to keep them coming if he wants to bounce back from his 2-pound, 4-ounce total from yesterday.

JT Kenney is still battling to find anything other than carp that he keeps bouncing his lures off of.

Josh Douglas seems to be finding his groove as the Minnesota pro just boxed two keepers – the second being a 3-pounder.

On spot No. 10 Lambert is long-lining a deep-diving crankbait. The Tennessee pro seems to be pulling out all of the tricks to get his first keeper of the morning.

Josh Douglas has been milking one offshore spot since yesterday. So far today he has nothing to show other than one drum.

Randy Haynes is still sitting on his original spot. Look for Haynes to keep close to this area as he spent a lot of time on it yesterday. Lambert is still jumping around looking for an active school of ledge fish. Elsewhere, Braxton Setzer has a limit in the mid- to upper teens – a huge improvement over his one-fish day yesterday.

Lambert is keeping a close eye on his graphs as he pulls up on his next few spots. He seems to be idling through to see if the fish are set up before dropping the trolling motor. Yet, he still has nothing to show. 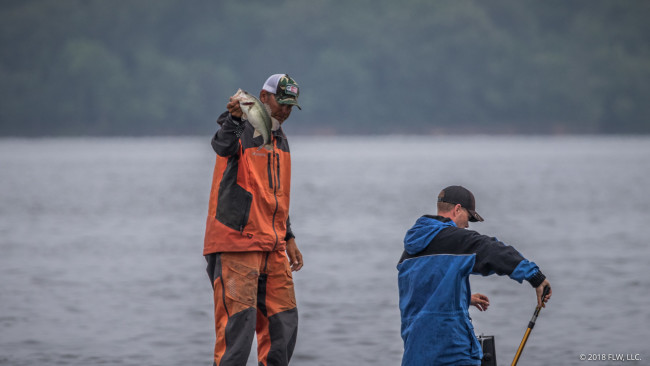 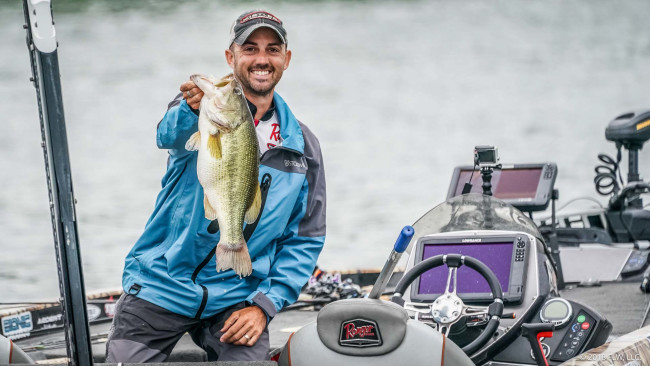 7:30 – The leaders have arrived on their first spots

All of the top five anglers have reached their first fishing destinations this morning. Randy Haynes now has two fish for 5 pounds.

Jason Lambert is working a spot on the north end with a crankbait. He has a few spectators with him. None in the box yet.

The only big fish to report thus far was caught by Kyle Cortiana. It was a nice 4-plus kicker, though he'll need a lot more if he wants to crawl out of 149th place.

After catching a 2 1/2 to start, Haynes lost another fish – not sure on the size – and then missed what looked like a 2-pounder that bit right at the boat. 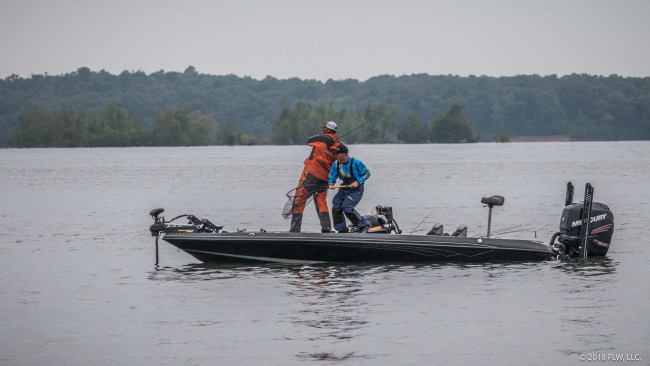 Randy Haynes started his morning on a main-river ledge not too far from takeoff. He pulled up around 6:52, and by 7 a.m. he had a 2 1/2-pounder in the livewell. Haynes has just one spectator boat, plus the FLW reporter following him. He'll have much more company this weekend, assuming he makes the cut.

Moments after Haynes put his first keeper in the box, second-place pro Jason Lambert ripped by on his way south. Stay tuned for updates on him.

Also, it's raining on Haynes now, and the first reports we're getting are that more boats are fishing offshore today than yesterday morning. Apparently, seeing Haynes and Lambert blast them offshore yesterday was enough to draw some of the shallow-water folks away from the bank today.

A pop-up thunderstorm that rolled through the lakes region of western Tennessee and Kentucky yesterday afternoon might have set the tone for what's in store today and, if the forecast is anywhere near right, parts of the weekend. Today's forecast calls for about a 50 percent chance of precipitation and thunderstorms basically all day long. There's more rain and thunderstorms in the forecast for Saturday and Sunday. A few scattered showers crossed the Gilbertsville, Ky., area this morning while the anglers prepared for day two, and sprinkles of rain continued to fall througout the takeoff ceremony.

Sunshine is for sure the better catalyst of a strong ledge bite, but don't think a little rain and overcast skies are going to keep Randy Haynes and Jason Lambert from working hard on their offshore fish. They're both committed to that bite, and they're the best in the world at it. They showed yesterday with mega-bags of ledge bass and now lead the field at the FLW Tour event presented by Costa Sunglasses.

We're birddogging both pros with on-the-water reporters, so if they get into any early flurries, you'll hear about it right here on the FLW coverage blog.

Precipitation: about a 50 percent chance of rain and thunderstorms all day