The smallmouths are heating up 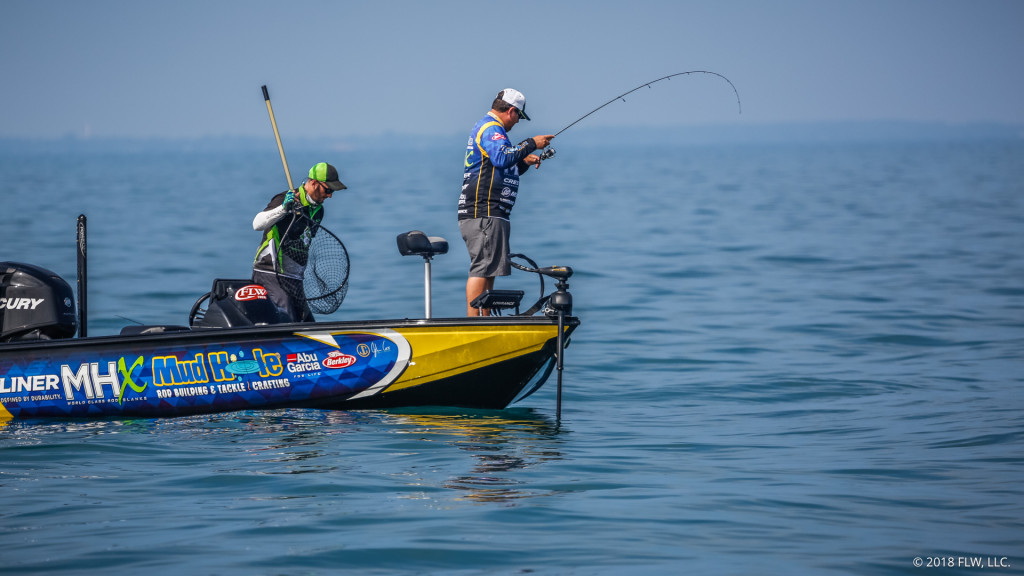 We're wrapping up the day one blog. The only additional update we have to report is Randy Blaukat with 16 to 17 pounds. Weigh-in starts in an hour. Join us in person at Lake St. Clair Metropark or online for FLW Live.

We'll try to provide one additional update in a few minutes, if we can track down a few more anglers. But if not, thanks for joining us, and please come back at 3:15 to watch the live day-one weigh-in from the FLW Tour event presented by Mercury on Lake St. Clair.

Meanwhile, we have a few big-weight updates:

Robert Pearson has 18-plus.

Darrel Robertson has 19-plus, and his co-angler has more than 21 pounds. What a day it's been in D-Rob's boat.

Scott Suggs didn't say how much he has, but that he has a "pretty decent" bag today.

Kurt Dove has four for 12 pounds.

A red-hot 15-minute flurry has Tim Frederick in contention on Lake St. Clair. He sacked up about 20 pounds in that short window. Frederick won the opener on Okeechobee this year but has really struggled since. He'd love to bookend his season with another high finish. 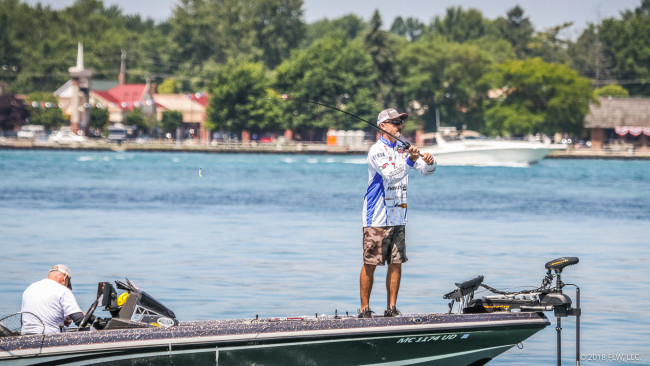 We've hit a tad bit of a lull here in the last 45 minutes or so. Our reporters are on the move now, trying to track down a few pros we haven't heard from to get updates before heading in for the 3:15 weigh-in.

Britt Myers has three for 7 pounds.

Scott Dobson, the unofficial leader, has improved his weight once again to 24 1/2 pounds. He's really pushing the pace now.

Most of the boats that were clustered in the shallower waters near takeoff have left and moved on. A lot of those pros said they'd be heading into Canadian waters. Cell service is a little sketchy there, so we'll work to remedy that issue as the week goes on. Stay tuned. 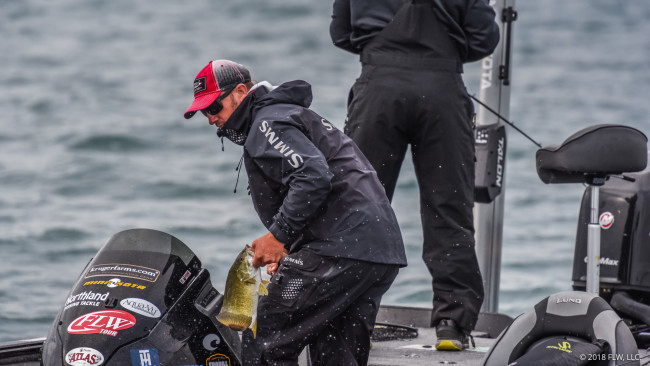 Jeff Gustafson and David Nichol both have a limit. Weight estimates are 16 and 15 pounds, respectively.

Across the board it seems like fishing is pretty darn good right now. Clark Wendlandt checks in with a limit of 13 pounds, and Jamie Horton has the same. Mike Surman has a 16-pound stringer.

It's mostly sunny with a few fluffy clouds. The temperature has finally reached 80 degrees. It's just a beautiful day to be wrecking smallmouths on Lake St. Clair. Don't forget that weigh-in starts at 3:15 ET. Watch live at FLWFishing.com.

Things are about to get real out on Lake St. Clair, at least, that's what Scott Dobson says about it. He just hammered a 4-pounder on a swimbait. That's another strong cull for him. He's going to work on 'em for a little while and then weigh his fish to see exactly what he's got. We'll provide an update after that. Be ready to see him make a charge this afternoon.

UPDATE: Since the last update, Dobson has added another good one to his livewell and weighed his fish. The verdict: 21.77 pounds. 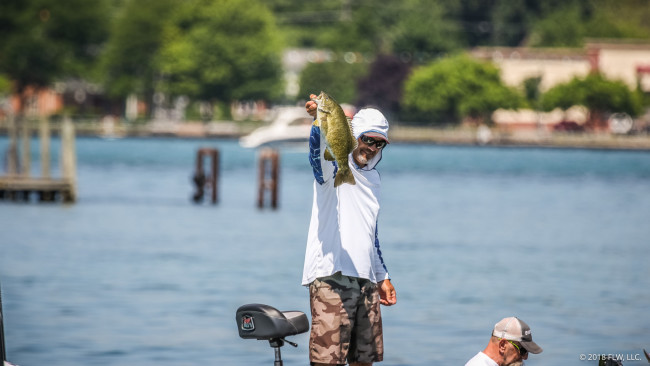 It didn't take long after we pulled up on Scott Dobson for him to improve his standing. He caught a 2 3/4-pound smallie to fill his limit then culled up with a 4-pounder and a 3 1/2. We're calling his weight at about 14 pounds. He's doing most of his work with a jerkbait.

One of our reporters was hanging out at the Belle River Hump area in Canada, and he just returned to a spot with cell service and sent in a string of updates.

The best he saw was John Cox with 17 pounds. Cox's co-angler has 15 or 16 pounds too. In typical John Cox fashion, he's fishing with a busted transducer. He broke it in practice in the middle of the lake, and while drifting and trying to fix it he floated over the rocky hump where he's catching all his fish, spotted it, marked it and returned there this morning. We all wish we were so lucky, right?

Lambert, who we've updated on previously, has two keepers. He's jumped off a 3 1/2-pounder and is around some good ones. What's more interesting is he caught a largemouth out in the middle of nowhere. How bout that? His biggest goal this week is to stay within the Cup cutoff. He's 27th and needs to stay in the top 40.

Chris McCall has four, including two over 4 pounds.

John Voyles has a limit for 15 pounds.

Canterbury caught a couple little ones, but just one keeper.

Fishing was pretty slow in the area all morning, but things are picking up across the lake now. 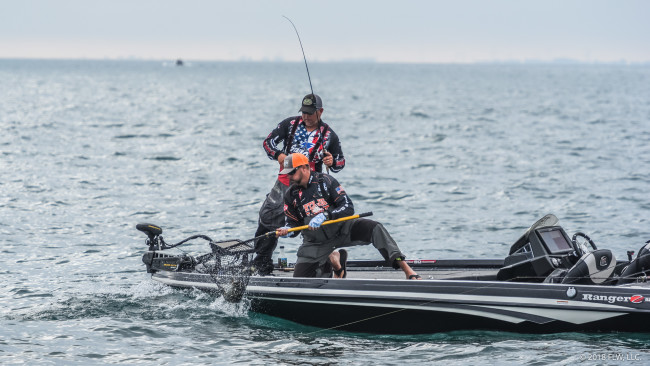 Texas pro Jason Reyes is whipping 'em today. He has a limit for 18-plus. Still not 20-pound limits to report.

Scott Dobson, the local with the most tournament experience on this pond, is one that most assume will catch 20-plus today. Currently, he has four keepers, but nothing special. He's suffered some bad breaks and lost three 5-pounders. He says the clouds this morning were no good for him. Maybe the change to sunny skies will turn it around for him.

Elsewhere, Alex Davis has a limit for 15 pounds. 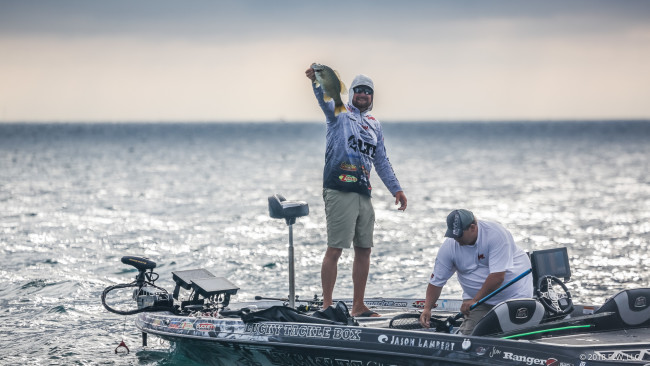 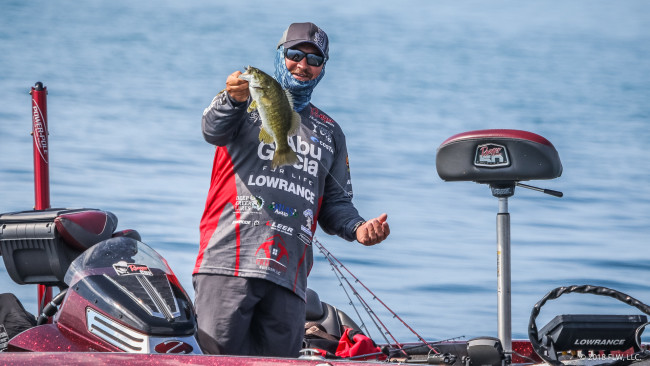 We just received a rash of updates from across Lake St. Clair. Here's the rundown:

Tim Cales has 15 pounds in the box.

Brandon McMillan has a small limit.

Brett Pruett has three fish with two being good ones.

Nick Gainey has four in the box. His co-angler has a limit.

Kyle Cortiana has himself a 14-pound limit.

Carl Jocumsen’s limit is up in the 18-pound range.

Jay Kendrick has a 16-pound limit. He says his morning bite was on fire.

Johnny McCombs has three fish for about 10 pounds. He lost a 5-pounder a few minutes ago. Right now, he’s ripping a jerkbait real fast over some shallow grass.

Currently, there is a pile of guys hunkered down outside Mitchell’s Bay the Canadian side of the lake. Swimbaits and drop-shots are coming into play for those guys.

Clark Reehm has a 17-pound limit with room to cull. We pulled up to him around the St. Clair river area, which appears to be fishy as he’s been catching a lot of walleye too. California pro Cody Meyer has five in the box for 16 pounds. Jeff Sprague is also off to a good start with a 15-pound limit. Mark Fisher has five little ones in the boat.

Now that the sun has broken through the bite seems to have picked up. We should start getting more and more reports of limits in the 20-pound range. 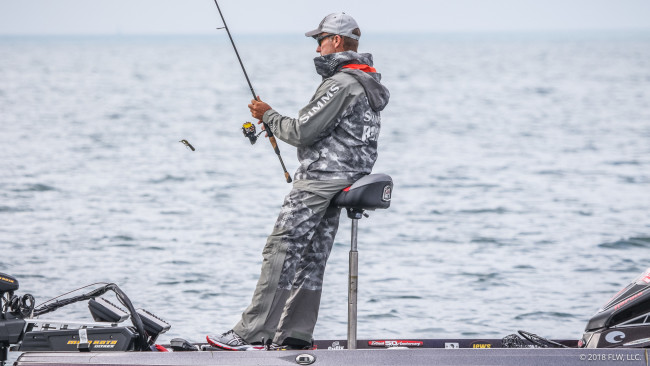 Curtis Richardson has himself a green fish in the livewell. Going into the event we knew someone could weigh in a decent largemouth limit but ultimately this will be a smallmouth derby.

On the smalljaw side of things Tom Redington and Andrew Upshaw each have three fish for about 8 pounds. Joe Thompson has three but they’re all dinks. Also, to no one’s surprise tubes are reigning supreme so far for those targeting brownies. 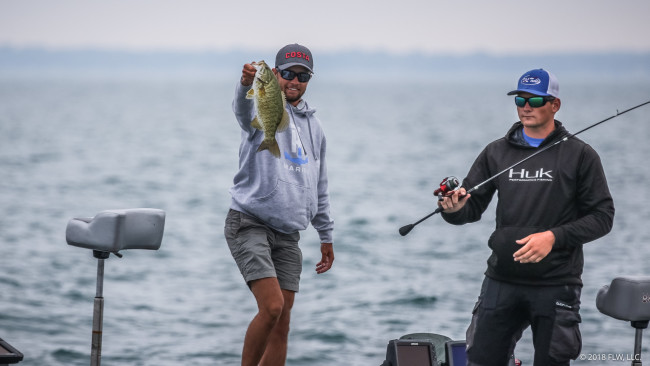 Gussy has himself a limit. According to him he has one good fish, two ok ones, and a small. The Canadian pro will undoubtedly make a few culls as the day progresses to help push his overall weight up.

Rob Jordan has two fish for 4 pounds. His co-angler has managed a limit.

Taylor Ashley is sitting on 14 pounds with only four fish. Ashley missed No. 5 earlier and apparently it was a biggun. 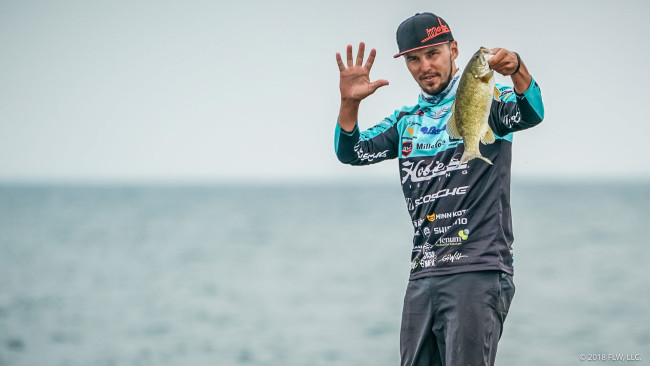 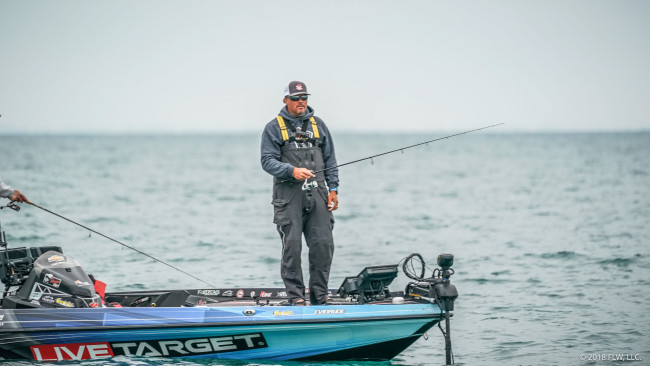 Heading into the final event Scott Martin is sitting in second place in the Pennzoil Marine AOY race. He is definitely off to a good start with 19+ pounds in the boat already. Look for Scott to make a few culls and really put the pressure on the current AOY leader, Mark Rose.

In a different part of the lake Anthony Gagliardi has one fish and Carl Jocumsen has four keepers.

Chris Gosselaar says he found a bunch of bed fish but wants to wait for the sun to come out to catch them.

Koby Kreiger was able to wind in his drift sock thanks to the wind slowing up a bit. Matt Arey has a solid start. He has two 4-pounder in the boat plus a 2-pounder. He should safely be in position to qualify for Forrest Wood Cup now. 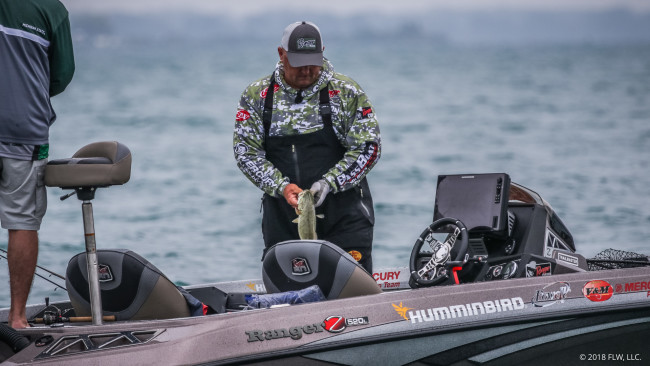 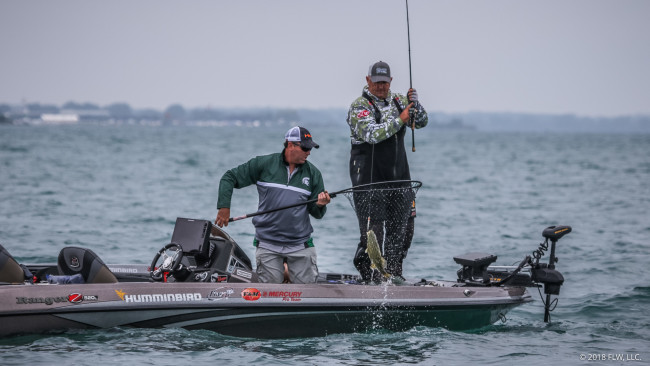 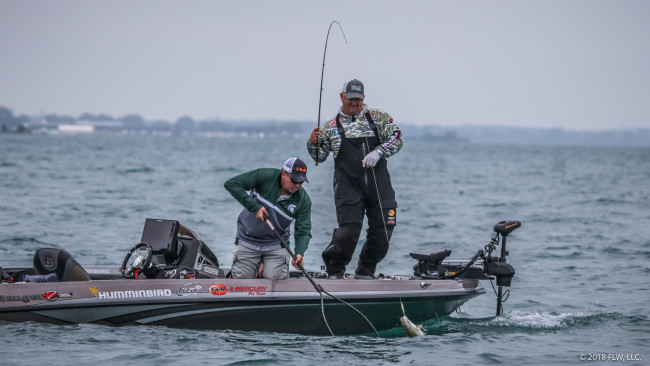 Fishing is overall still slow on St. Clair, but they're starting to bite. Aaron Britt put a 3 1/2 in the livewell for his first. Jason Reyes has three fish total, including a 2 1/2. He's at 8 pounds total and is targeting a slick of dead mayflies. Koby Kreiger has a limit and is culling at 10 to 12 pounds. Jeff Dobson of Oklahoma has four keepers. Taylor Ashley landed a 3-plus recently. Craig Rozema has the same as Ashley but lost a real tank.

We're seeing some topwater and spybaiting as well as the usual finesse stuff now. Anglers seem to be grouped up on the best flats. We'll see how they spread out as the day progresses. 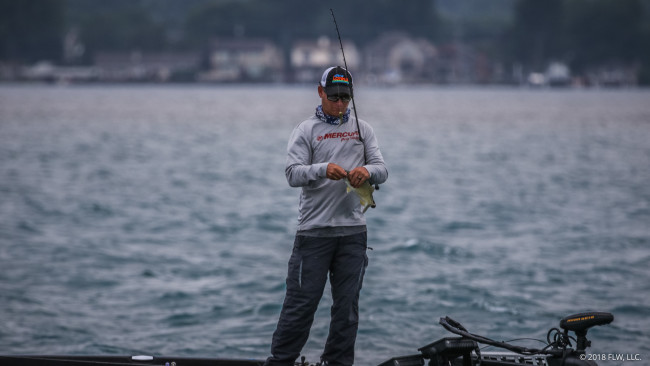 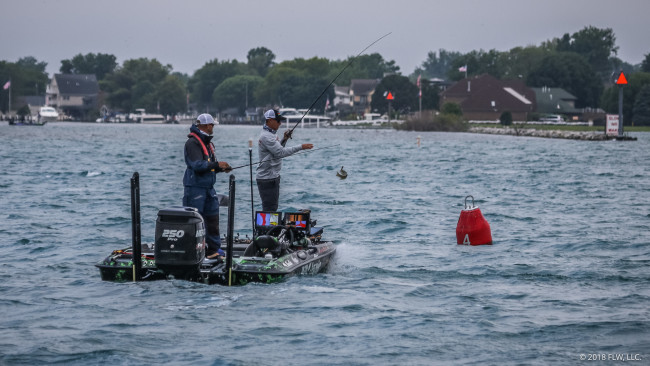 Most of the field left takeoff and headed southeast, into the heart of St. Clair. Jeff Gustafson made quick work on his first stop. He landed a 3 1/2-pounder on the first cast. His co-angler quickly sacked up three keepers for about 8 1/2 pounds.

Andrew Upshaw, fishing just outside takeoff, caught three 12-inchers in about 10 minutes, but they all had to go back. The minimum length limit is 14.

Jim Moulton has a pair of keepers, while John Hunter has five little ones.

As expected, it's mostly tubes and drop-shots being used right now. Just about everyone is wishing for more sunshine to get these fish to lock down and bite. 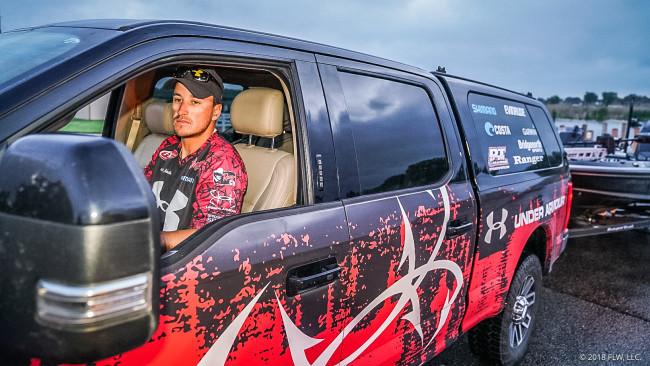 Dawn broke with cool, overcast and slightly breezy conditions following a day of persistent rain in the Detroit, Mich., area, as anglers headed out on Lake St. Clair for the seventh and final stop of the 2018 FLW Tour season.

Most of the practice reports suggest that the field will be kicking around in St. Clair proper most of the tournament, versus running to Lake Erie or fishing the Detroit or St. Clair rivers. Plenty of big smallmouths live in St. Clair, making a gamble on a long run through rough water unnecessary.

As for the overall productivity of the fishery right now, it’s certainly strong. Joe Balog, a former St. Clair local and highly successful tournament angler from the region, predicted a slugfest a few weeks ago, and that’s surely what’s in store. Finesse tactics with tubes and drop-shots will probably produce most of the bigger bags, but jerkbaits, topwater and various other power-fishing baits can certainly catch ’em too.

There’s a lot on the line this week. Cup berths will be finalized, the Pennzoil Marine Angler of the Year will be crowned and someone will walk away with a six-figure paycheck.

Follow along on the FLW coverage blog all day for details.