Horton Crowned Co-angler of the Year 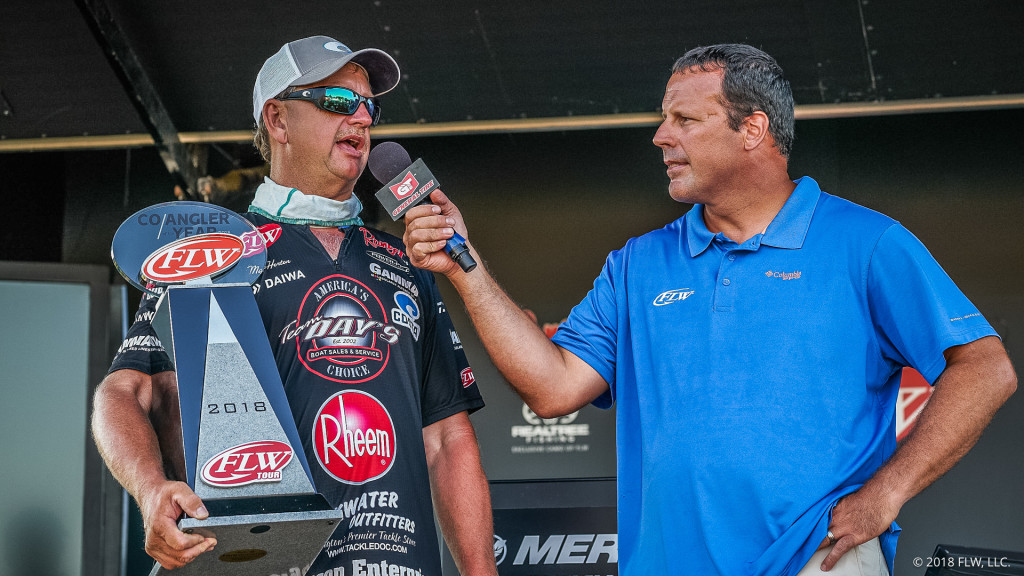 It’s been a tough year for Mark Horton, but things are most definitely looking up. The Nicholasville, Ky., co-angler won the 2018 FLW Tour Co-angler of the Year award today at Lake St. Clair, edging out last year’s COY Gary Haraguchi by just one point. Horton was awarded his COY trophy and a certificate for a new Ranger Z518C with a 200-hp outboard motor following the day-two weigh-in of the final FLW Tour stop of the year.

All year, Horton admits that he’s been distracted by the druthers of a divorce, and it’s affected his ability to prepare for each tournament and focus on fishing. Yet the fishing gave him an outlet from the stress of the situation, and today he experienced one of the most memorable days on the water in his life. He caught 22 pounds, 4 ounces of bass while fishing with pro Dylan Hays.

“It’s a big surprise,” Horton says. “I was in fifth place [coming into the tournament]. I didn’t think I had a shot at it, especially after starting in 123rd place yesterday.

“Today was just unreal. We caught them all by about 10 o’clock. Then we left the area.”

A couple of late culls while prospecting new areas with Hays gave Horton a few extra ounces, boosting him into 30th place in the tournament standings, which was exactly where he needed to be to pass Haraguchi.

“Dylan gave me a boat today,” says Horton. “Today was a gift. I was so far out of it. Him being such a good guy, he didn’t hinder me at all. Even though I’m sure he wasn’t thrilled I caught a couple 5-pounders he would have liked to have, he was excited for me. It was high fives and fist bumps all day.”

Horton performed consistently well all season. He earned a check at every tournament. A third-place finish at Smith Lake was his highest showing, and he never finished lower than 68th at Lake Cumberland. He says he got a big bite at every tournament except Kentucky Lake, but he was able to still finish 39th at that event and keep in the COY hunt for the finale on St. Clair.

In all, despite a tough situation off the water, Horton’s year has been just what a co-angler would wish for: a good time with good friends, including his travel partner Shawn Murphy, and a steady flow of paychecks. He’ll use the Ranger Boats certificate to purchase a new boat and replace the one he sold prior to this season. And then he’ll go back to fishing.

As for whether or not he’ll use the COY title to move up to the pro ranks, Horton isn’t so sure just yet.

“I’m not looking to be a pro fisherman, per se,” says Horton, who owns Heat Pro, a heating and air conditioning company in Nicholasville. “I do this just for the fun and camaraderie, to travel with the guys and have a good time.”