Hunting for a Cup With Canterbury 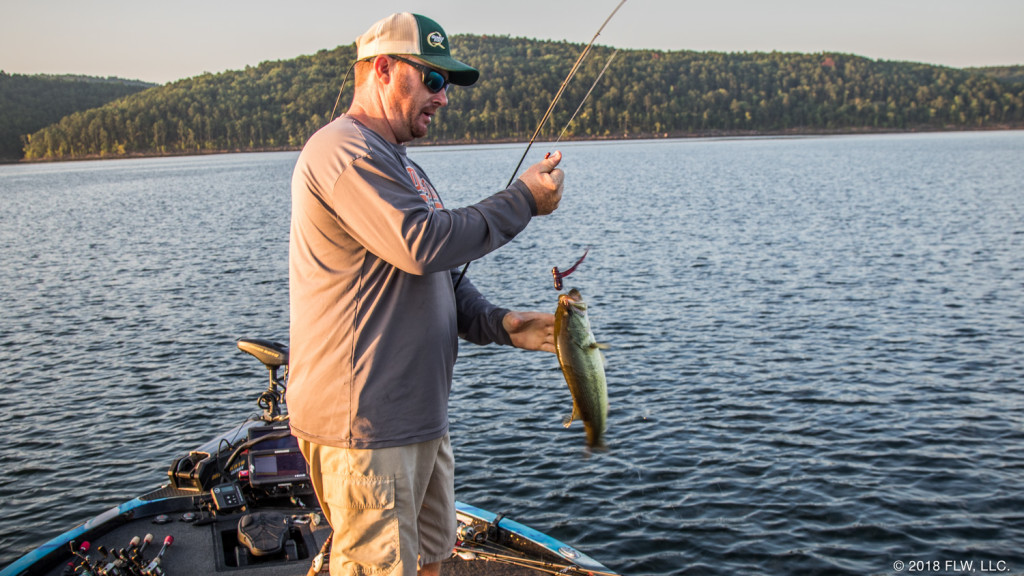 Scott Canterbury doesn’t need a Forrest Wood Cup victory to validate his 2018 season or his career in professional fishing. He just doesn’t think about that.

Sure, the Odenville, Ala., pro has thought about it before, like when he came up 1 ounce short of winning the Cup in 2014 and instead saw Anthony Gagliardi hoisting the biggest prize in fishing. The same goes for 2012 when he took second to Jacob Wheeler and had his first brush with a potential Cup victory.

“All you can do is fish as hard as you can fish,” says Canterbury during day one of practice on Lake Ouachita. “You can’t dwell on it. You can’t think about it.”

Canterbury’s wife, Dixie, has a rule: 24 hours to dwell on it and then move on. He admits he may have needed an extra 24 after the 2014 Cup.

But the 2018 Cup is business as usual for the 11-year pro, who has 42 top-10 finishes to his name. He finished eighth in the Angler of the Year standings and doesn’t need to prove anything to anyone. Consistency is his calling card, and Canterbury shows it every tournament, every practice day, every cast.

Canterbury was gracious enough to host a ride-along on day one of practice to get a closer look at the process that leads to what has been a consistently successful career. 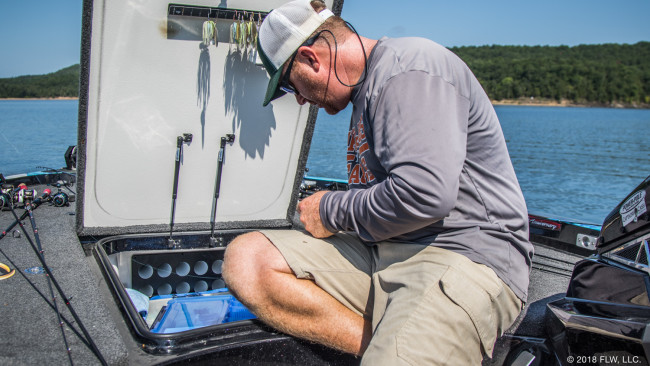 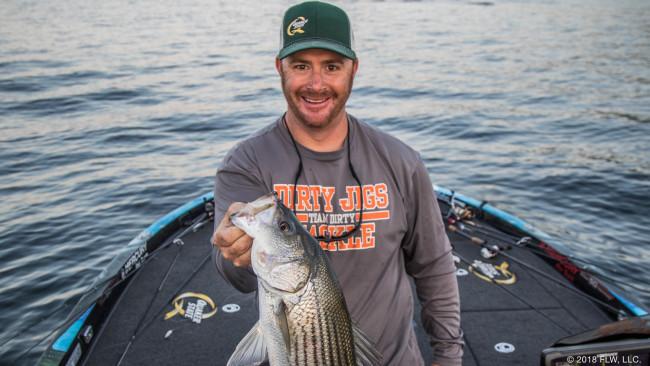 A 6:15 a.m. launch has Canterbury checking brush piles by 6:30. It’s been a few weeks since he was last at Ouachita for Cup pre-fishing when the heat index was 115, water temperature was closing in on 100 and the water level was a little higher than it is now.

It’s still hot, but the early morning temperatures give Canterbury some relief to bounce around between brush piles while looking for feeding schools of bass. He sets up in nearly 30 feet of water and starts throwing an 11-inch Netbait C-Mac Worm hoping to tempt something out of the brush.

At 6:50, he finds some success in the form of a beautiful striper.

“That was a good way of finding out what’s down there,” he says. “There was about 100 of them down there all running together.”

Canterbury decides it’s a good time to start burning some topwaters so he moves spots, and conversation turns back to the heat and Canterbury’s competitive spirit.

“This game is a lot mental,” he says. “A lot of it is just as much mental as it is physical.”

Canterbury likes that. He wants the conditions to be miserable because it gives him an advantage over competitors who can’t stand the heat. 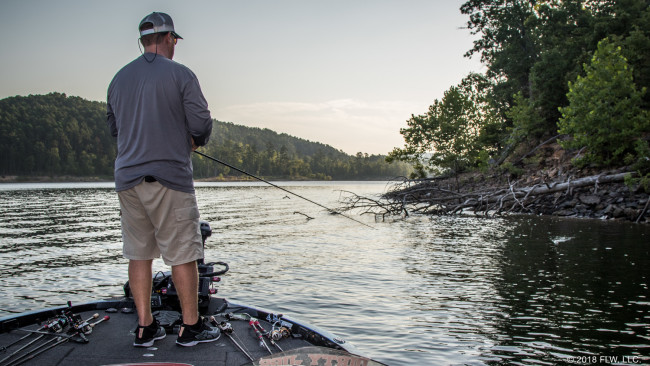 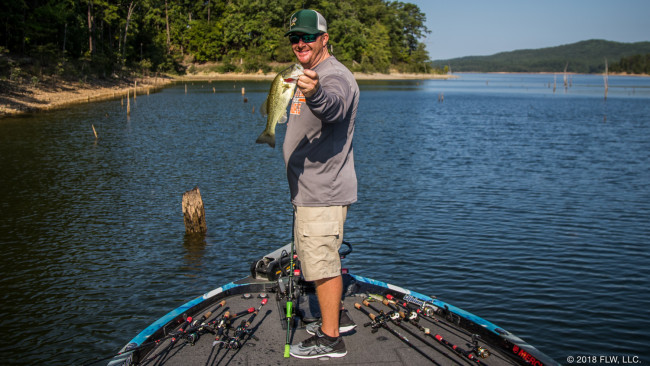 “To win here, you don’t need a lot of bites. You need the right bites.”

Canterbury knows how tough Ouachita is going to fish this week. There's no consensus on the quality of the fishing in the grass, and ultra-clear water, high temperatures and deep water can make it hard to find the right fish at the right times.

It all comes back to consistency and a level playing field. All 56 anglers have to deal with the same conditions and figure out the right ways to catch them. Canterbury’s experience is a big advantage over the younger anglers who can’t figure out a lake in four days as well as Canterbury can in two.

At 7:20, Canterbury hooks into a keeper largemouth while burning a topwater along a windy, rocky point. It’s a technique Canterbury loves and says he’d do it all day if it caught him fish. Of course, there isn’t a technique he wouldn’t employ all day if it earned him a lot of big bites. 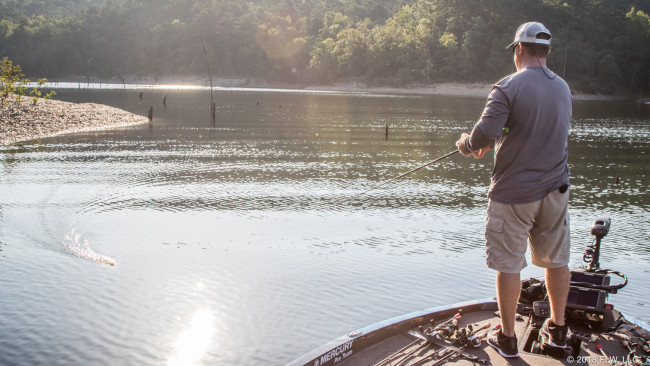 The guaranteed payday for all 56 Cup anglers means no one is worrying about hitting singles and taking walks. It’s home runs or strikeouts at the Cup. There’s pressure to win, sure, but no one is walking away from this derby empty-handed.

“We fish against the best in the world, but I don’t ever think about that,” Canterbury says. “I do my part, and I’ll be good.”

It’s 8:50 now, and Canterbury is back to running the lake looking for schools of feeding fish. His topwater experiments worked well enough to know it’s safe to move on to figuring out the deep bite.

It doesn’t take long to notice a big school of spotted bass in a frenzy. If you’re in the right area at the right time, they’re pretty hard to miss.

Canterbury hooks into one and notices the fish spitting up baitfish as he brings it in.

“Catch fire on those pretty easy and it’ll be good,” he says. “If the spots have gotten bigger, it definitely will play this week.” 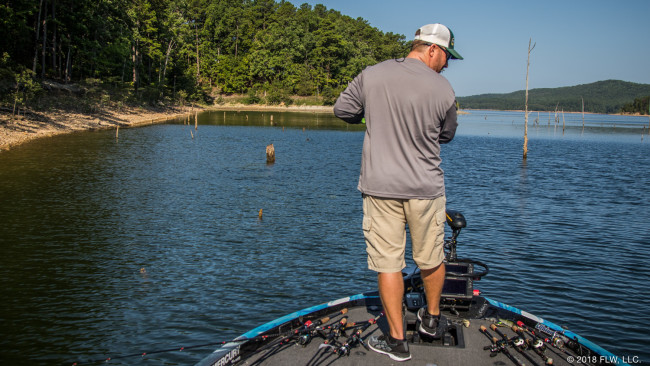 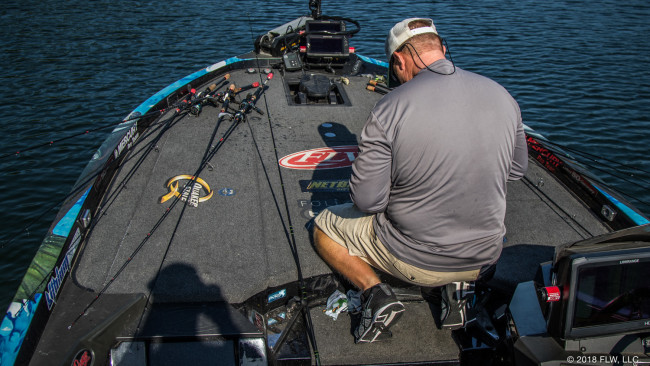 There’s isn’t much wasted time when Canterbury is practicing. With close to a dozen rods on the deck and little need to tie on new baits, he’s casting big worms to search deep brush piles, burning a buzzbait around standing timber and tossing spoons and swimbaits at any fish that decides to show itself in open water. It’s a furious pace, and each cast is giving Canterbury new information or confirming what he already suspects.

“I’ve had more bites today than when I was here a few weeks ago,” he says, before the conversation turns to vegetation.

“When there’s deep hydrilla like there is here, there’s always a possibility to win on that.”

But vegetation isn't plentiful in the section of Ouachita Canterbury is fishing. It’s mostly rocky points, standing timber and a bunch of brush.

At 10:50, Canterbury finally sees a highly encouraging sign in the form of a wolf pack of largemouths; four or five in the 4-pound range. He doesn’t cast to the group of roamers but marks the spot with his electronics and moves on down the bank. He’s looking for more wolf packs and the possibility of a honey hole no one else knows about. 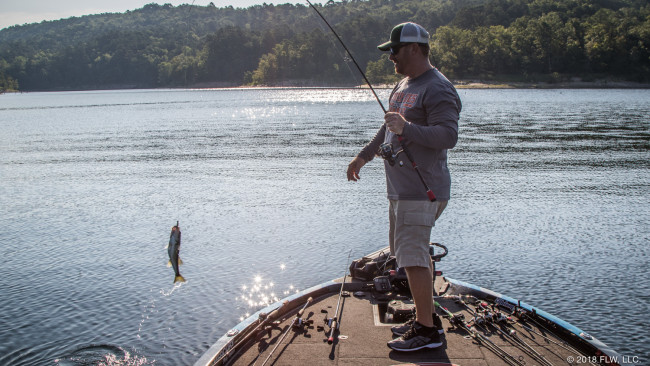 The ensuing hour before Canterbury drops off his reporter is spent fishing more rocky banks and a couple more brush piles with varying results. He hasn’t found any monsters yet, but he knows they’re out there. It’s an encouraging first six hours of practice.

Ouachita is a big lake, and he's only seen a small portion of it in those six hours. Canterbury hints at making a “drastic move,” perhaps to the opposite end of the lake, before he backs away from the boat ramp at Brady Mountain and coasts through the no-wake zone back into the main lake.

Everyone expects Ouachita to be a tough riddle to solve this week, but if anyone can do it, Canterbury can. After more than a decade on Tour and a resume full of top 10s, it would be foolish for anyone to think Canterbury can’t solve Ouachita and make another run at a Cup victory.

It’s been another tremendous season for Canterbury, but he’s not satisfied yet. He’s hungry.

So are the fish, and he’s going to find them.