The Florida pro wound up tied to one approach at Ouachita 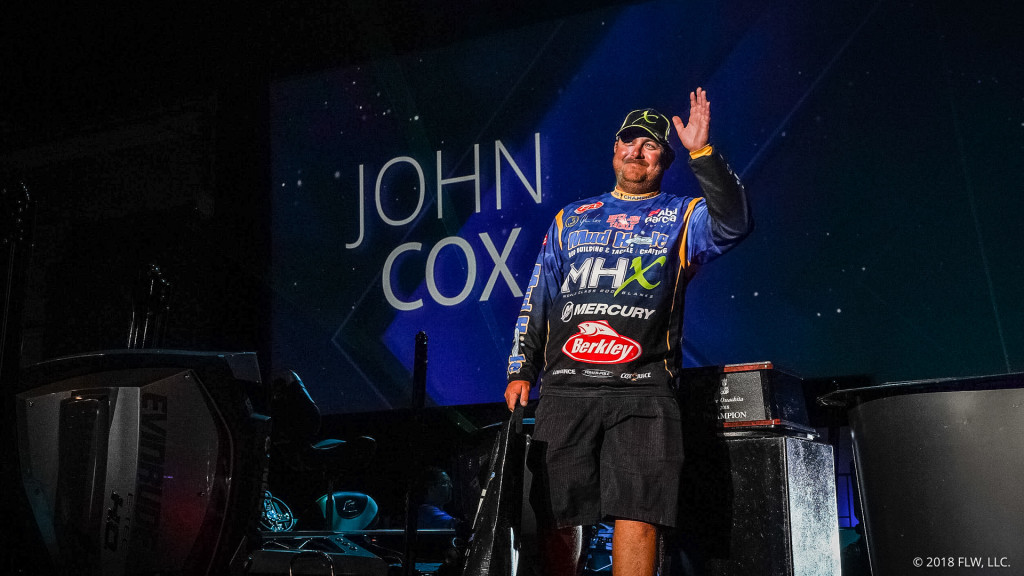 Hindsight can be a helpful tool or a dangerous one for a tournament angler. On one hand, it’s useful for evaluating decision-making. On the other, too much time spent looking back can put a dent in a guy’s confidence. Now that pros have had some time to reflect on the 2018 Forrest Wood Cup, we wanted to know what their takeaways were from the tournament, and what they learned. Did they do all they could, or were there missed opportunities? This is the first in a series of “Cup Reflections” that dives into their post-Cup thought process.

When John Cox reflects on his 2018 Forrest Wood Cup performance, his thoughts are mostly positive. He made the cut and fished on Championship Sunday, after all.

But Cox also knows he left a little on the table.

The 2016 Cup champ opted not to pre-practice at Lake Ouachita. He figured he’d been there before and had a good understanding of how the lake fishes in August, as well as areas of the lake where quality fish are usually found. Unfortunately, he never got an accurate scouting report on the grass.

When Cox made it to Hot Springs for official practice, the Florida pro was rigged up to fish green stuff topped out at the surface. Turns out there was plenty of grass, but nothing like he expected.

He got three solid bites on topwater that first morning before the fish shut off and he was left scrambling the next two days.

“I was pretty much 100 percent committed shallow because I thought there was going to be some hydrilla topped out. I thought the deep thing wouldn’t even be a factor for me,” Cox recalls. “Once I realized there was no topped-out grass anywhere, then I realized that I probably should start idling and find some brush piles. But it was the day before the last day of practice [when he finally came to that conclusion], so I text the Lowrance guy [service tech] and was going to have him put the transducer on my boat because I ripped it off somewhere during the season.”

For Cox to even consider fishing offshore is something of an anomaly. He’s as committed to the shallow bite as pros get, but he had nothing going up shallow.

He might have even gone through with the deep switch had a change in conditions not occurred before Wednesday’s last practice day and prompted Cox to skip the service trailer visit.

“I woke up the next morning and there was a little bit of cloud cover,” Cox says. “The forecast looked like it was going to rain the whole tournament. I figured I was just going to go run the bank all day. Jeez…the bites I got. I probably had 30 hits, and they were all good ones. I went from thinking it was going to be an awful tournament to thinking maybe I figured something out and could do well.”

Once he got the train rolling again on a stormy final day of practice, Cox was committed for good. Similar conditions in the forecast for the tournament persuaded Cox away from exploring the deep bite, and he never replaced his transducer.

On day one, under overcast skies, Cox got several good bites right away. He lost a couple nice fish, including a 4-pounder, but he wasn’t sweating it. There were supposed to be plenty more bites coming.

That didn’t prove to be the case. Cox spent the entire tournament throwing topwaters on shallow points and pockets and was never able to get the same action going as he experienced on the last day of practice or the first couple hours of the tournament.

“I just didn’t realize how much time I would waste doing that [throwing topwater],” he says. “I just wasted hours of the tournament throwing it. I knew I wasn’t going to catch much on it until that right window came when we got some cloud cover. I just threw it because I didn’t know anything else. I could not get bit doing the drop-shot thing up shallow around anything in the water, or casting my [Berkley MaxScent] General around on a wacky rig. Nothing would eat it. They would swim up to it and look at it and not eat it. It was so weird. It would’ve been a completely different outcome if you could just catch some of those fish like normal, if it was spring.”

Looking back, Cox says if he’d have had another option for when the topwater window closed, he might have been able to push the pace a little more.

The “dead periods” he encountered usually occurred during periods of bright skies and sunshine, when activity more or less ceased up shallow.

“It would’ve been nice to have a little bit of off-the-bank stuff. Not way off, but a little off of where those topwater bites were coming. I just wish I could’ve wasted time better than when I was burning the banks. I knew when the bite was over and knew when it was going to start again. Out of three days I caught one fish in that dead period, and it was a 2-pounder on topwater.

“Those are the times during the day when, if you did have some brush or something that you could keep throwing at, you could maybe catch a fish or two in that period and you’d be good.”