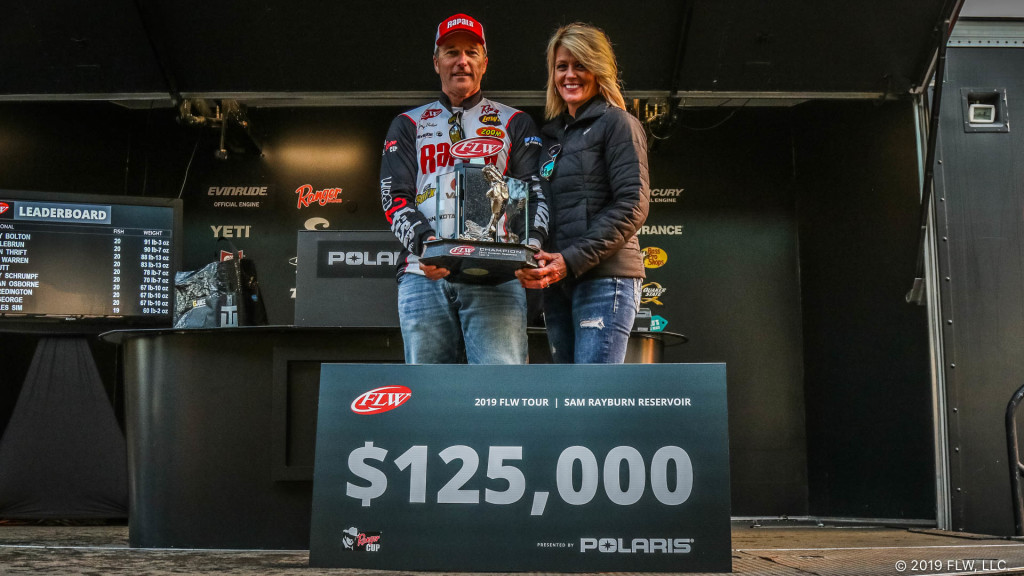 Terry Bolton’s professional fishing career almost ended before he finally had his moment. The moment every tournament angler dreams of. The moment decades in the making, so close so many times, yet still so far out of reach.

Today, Bolton finally grabbed hold of that moment, and he didn’t let go.

With a 17-pound, 6-ounce bag on day four of the FLW Tour opener on Sam Rayburn, which was presented by Polaris, the 24-year Tour veteran did something he’s been within ounces of doing so many times before: He won. He won his first Tour event, and he did it despite a handful of tremendous anglers — including standout rookie Nick LeBrun and the best angler on the planet, Bryan Thrift — breathing down his neck in a furious effort to outpace the Benton, Ky., pro.

Bolton bagged 33 pounds and 9 ounces on day two of the event, which set the wheels in motion for everything that followed. He added 19-10 on day three to retain the lead, and his 17-pound bag today brought his winning total up to 91-3. 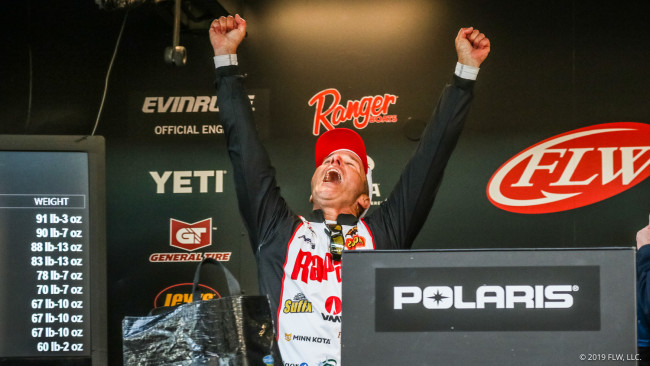 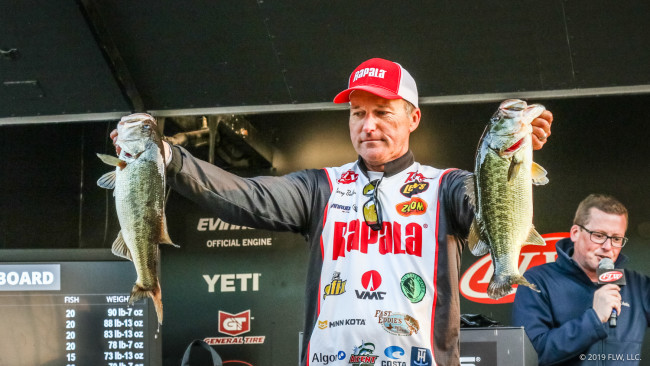 But for all the fish Bolton caught this week, there were two moments that truly stood out for the man who has earned more than $1.2 million in his FLW career.

On day two, Bolton pulled up to a spot at which he caught all 20 pounds and 10 ounces the day before. He made some casts, landed a lot of fish and got up to “27 or 28 pounds” before he decided to move. Almost.

“I was going to leave, and I was afraid a local boat was going to get in there, so I decided to stay. Lo and behold I catch a 9-8 and I catch 33 [pounds],” Bolton explains. “My staying there is what won it, because I stayed and caught that 9-pounder. I don’t know if you call it dumb luck or a good decision.”

Winning a Tour event takes a little of both, and given how many good decisions Bolton has made in his career, it was about time Lady Luck helped him out. 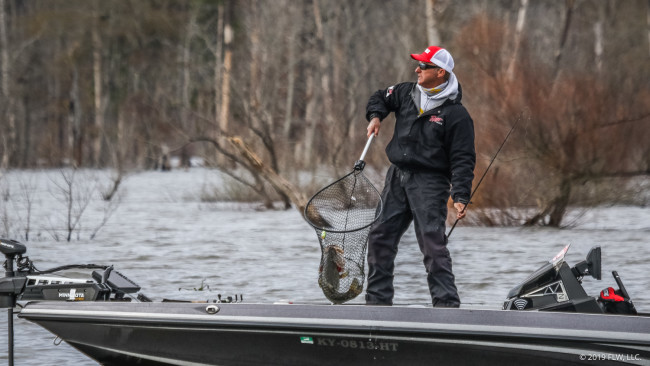 Still, a 33-9 stringer doesn’t guarantee anything when you have two more days to fish. Bolton still needed to catch some fish, and with a steady day three, it all once again came down to one good decision on the final day.

“I knew I wasn’t going to win with what I had,” he says. “I was running around and I wasn’t catching anything and I was tired. I said, ‘I’ve got to go somewhere different.’ I’ve got this one school of fish; I don’t know how big they are. I hadn’t been to them all week, and I ran to them, and lo and behold they were good ones. I wish I’d have gone to them an hour sooner.”

Bolton found a 4 1/2-pounder and a couple 3-pounders in that spot, which he caught on a Rapala DT 10 crankbait, but none of those fish mattered more to Bolton, at least at the time, than the 4 1/2-pounder he lost in that stretch.

Bolton has had plenty of close calls before, most notably at Kentucky Lake in 2006. So, at 2:51 Monday afternoon, when Bolton was again so close to the top finish and he watched a big fish swim away from his boat, it was no surprise Bolton thought his chances of winning swam away with it.

When it’s meant to happen, it just happens.

“It was my turn, and that’s all I can say about it,” Bolton says. 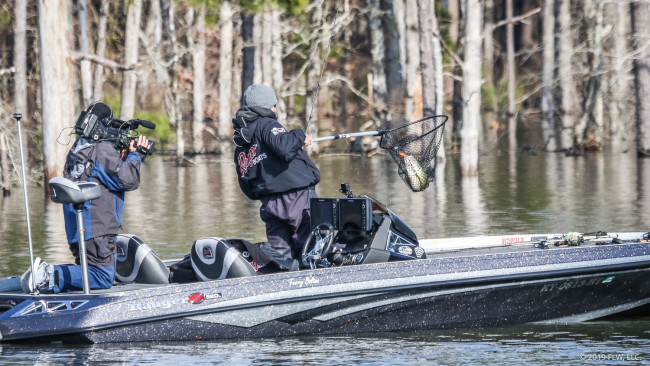 He waited a long time for his turn, but he’s grateful he got one. When Bolton considered retiring this offseason — a proposition he says was 60-40 in favor of retirement — he had no way of knowing just how close he was. And now that he’s finally gotten it, the fire is rekindled. It’s all about his next shot. And the next after that.

“I’ve made two BFL All-Americans. I was a BFL points leader in my division. I won an EverStart. Now I’ve won a Tour [event]. A Cup now. An Angler of the Year or a Cup.” 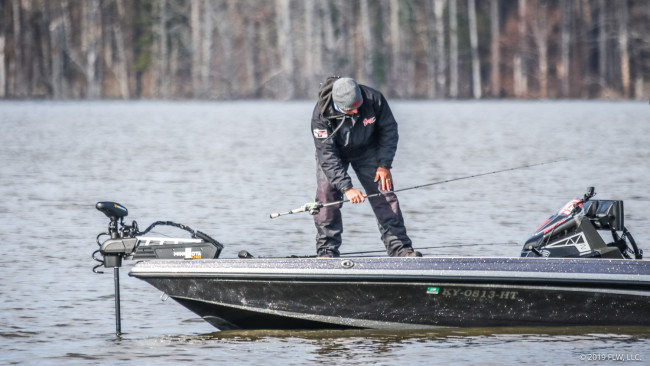 Bolton admits that he didn’t give his best effort last season. His goal in 2019, once he decided to keep fishing, was to give it his best effort and have fun doing it. His best effort included making some terrific decisions about where he fished and what he fished with.

Most of Bolton’s fish came on Rapala DT crankbaits — either a DT10, a DT14 or a DT16 — in Caribbean shad or demon colors. He rigged his DTs on either Magnum Crankbaits 2 or Magnum Crankbaits 3 Lew’s Custom Pro Speed Stick Ledge Series Casting rods, paired with a Lew’s BB1 Pro Speed Spool in 5.1:1 gear ratio spooled with either 12- or 14-pound Sufix Invisiline fluorocarbon.

And, as is often the case with the man nicknamed “Blade,” the spinnerbait came into play throughout the tournament as well. He leaned on a white 3/4-ounce Accent spinnerbait to do some of his damage, as well as a Carolina rig equipped with a 5-inch Zoom Lizard in green pumpkin.

Bolton spent his entire tournament targeting many of the same areas, seven or eight of them, all laden with grass.

“I was basically fishing bare spots on inside grass lines in the morning, when those fish were up feeding on bait, catching them on a DT10, DT14 and some on a spinnerbait. Then, after 11 o’clock, I was going to the outside grass line drains and fishing 15- to 18-foot deep with the DT16 and 3/4-ounce spinnerbait.”

It was a pattern that Bolton found in practice and executed to perfection over the four days of competition. It was also a pattern that was a testament to the hard work Bolton is committed to putting in this season, paired with the fun he is certainly already having.

“I had probably the worst year I’d ever had in my career last year,” he says. “I was pretty low. I just wanted to come out and have fun and give my best effort, and I did this week. It all worked out. If it wasn’t for some encouragement, I was close to hanging it up.”

Instead of hanging it up, Bolton just wrapped up the biggest accomplishment of his career.