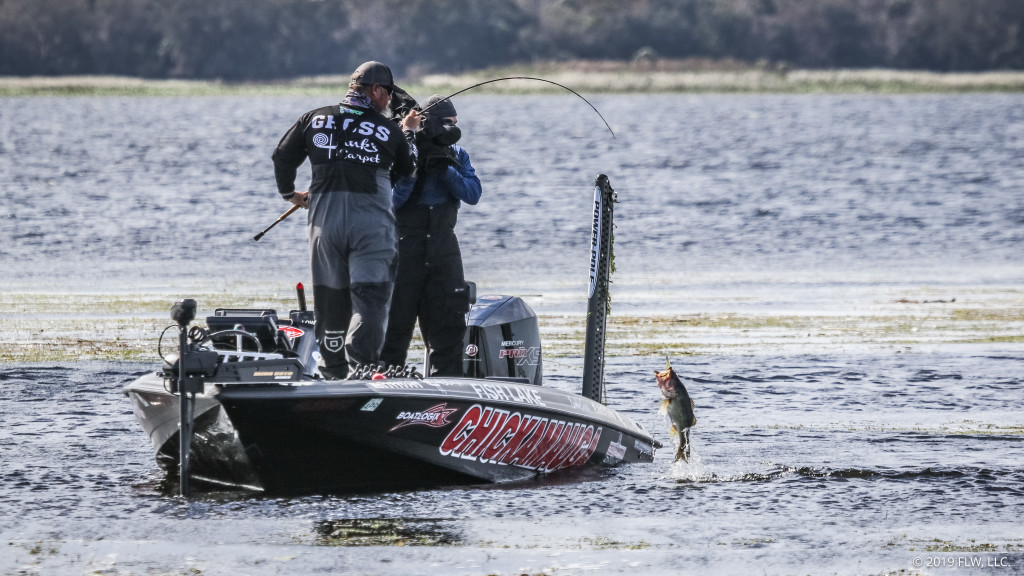 Darrell Davis just missed a 5-pounder on FLW Live. He has been around the fish to win but just hasn’t capitalized today. He’s been a little frustrated, understably, but he still has some time. All it takes is one big bite.

Buddy Gross is back on his juice spot looking to find the giant that has eluded him all week. Still, he’s in great shape right now to take home the W if results hold.

Along with FLW Live, we’re closing down the blog and live leaderboard for the day. Either swing by Big Toho Marina or come back to flwfishing.com at 4 p.m. ET to see who is crowned the champ of stop No. 2 of the 2019 FLW Tour.

Thanks for following along with the blog this week. We look forward to seeing everyone at Lake Seminole in a few weeks.

Tommy Dickerson is in the midst of changing baits and and techniques. His Marshal has reported that Tommy even gave bed fishing a try, though it did not produce anything.

John Cox is heading back to Toho to finish his day. You have to imagine he’s looking for bedded fish. Remember, on day one he caught his 10-pounder right before weigh-in. That would sure make things interesting if it happened today. 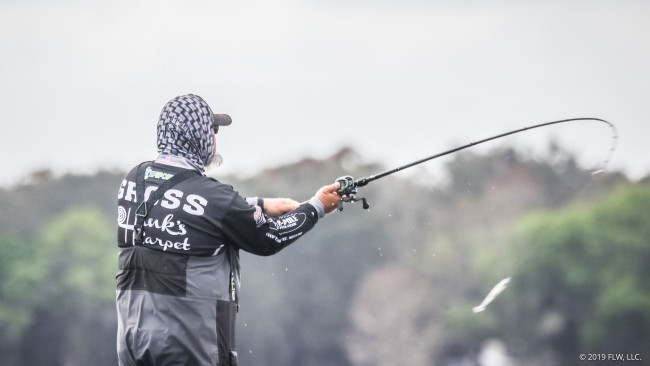 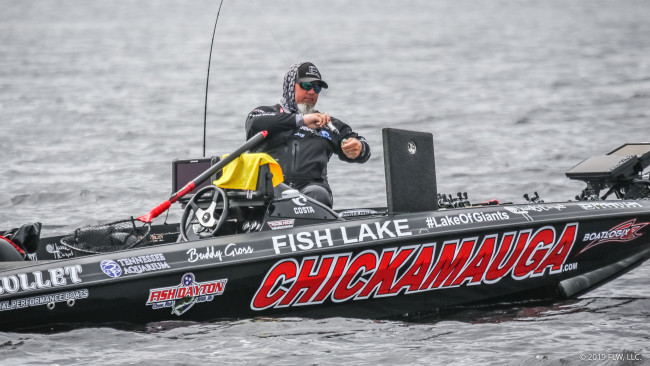 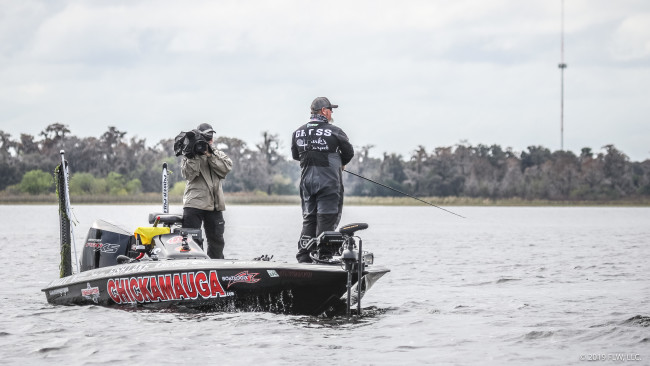 This is proving to be a classic Florida tournament. It's shaping up to be won (or lost) on a few big bites late in final day. Buddy Gross recently commented that he needs to go find himself a “great big one,” which he has yet to get all week. John Cox and Darrell Davis are both within a big bite or two of Gross’ lead. Even Josh Douglas could realistically be a threat if he runs into a few bigguns. Regardless of who ends up winning, something special is bound to happen in the waning hours of Championship Sunday.

Josh Douglas is still swinging for bigguns down in Kissimmee, and he knows it. He just felt one bump his bait, but couldn't hook up with it. He’ll have to start landing them if he wants to make a run at the leaders.

As far as fish catches go, there’s not a whole lot to report on. The most noteworthy thing as of late could be the weather on the Kissimmee Chain. Lake Toho, which is the northernmost body of water on the chain, has been rained on all day, while the southern lakes have been dry. In an hour or so the rain should leave for the remainder of the day. 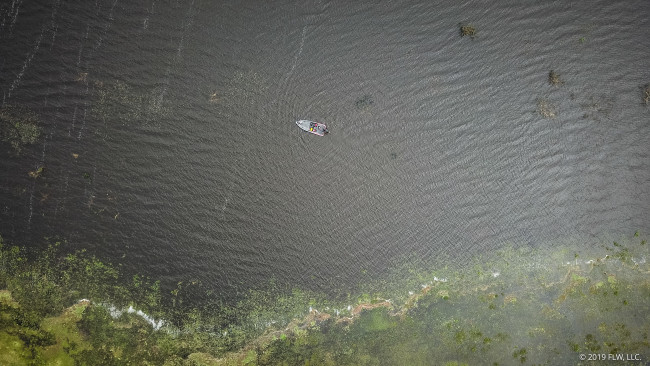 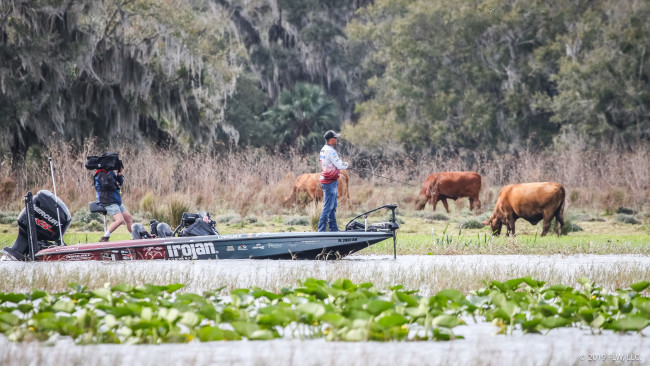 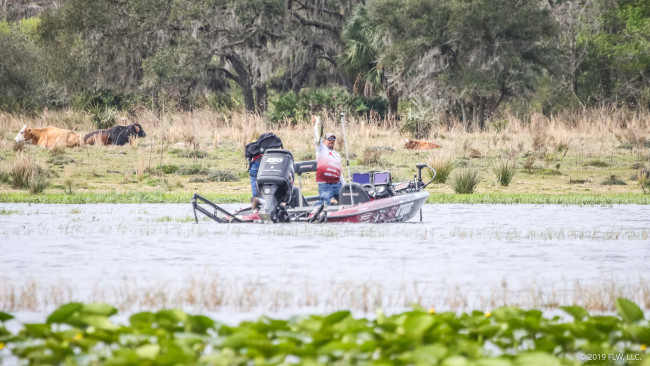 Darrell Davis cashed in with his Trixie Shark by catching a 4-pounder. Hel was a bit rattled after dumping a 4-plus-pounder near the boat earlier, but now it looks like he is settling back down.

Buddy Gross has been working through a bunch of baits lately. He has had to rotate through baits because his fish seem to get educated if he throws the same bait too consistently. As of late, he only has to show a few small throwbacks.

Minnesota pro Josh Douglas finally got hooked up on something big, but then it came unpinned. Despite losing the fish, it is a good sign for things to come for Douglas.

Scott Martin has now caught four fish, including a 3-pounder. He’s working on filling out that limit and perhaps running across some big ones in the process. He certainly needs them right now. 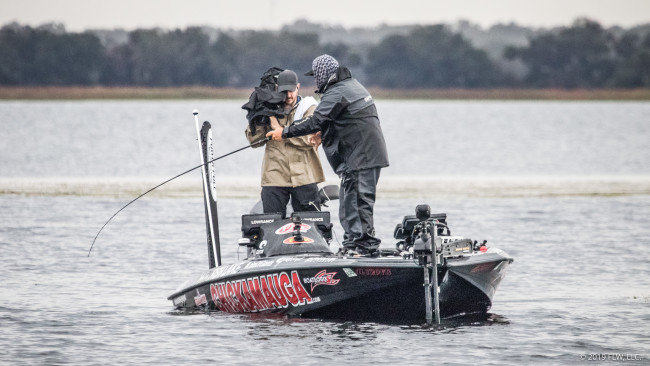 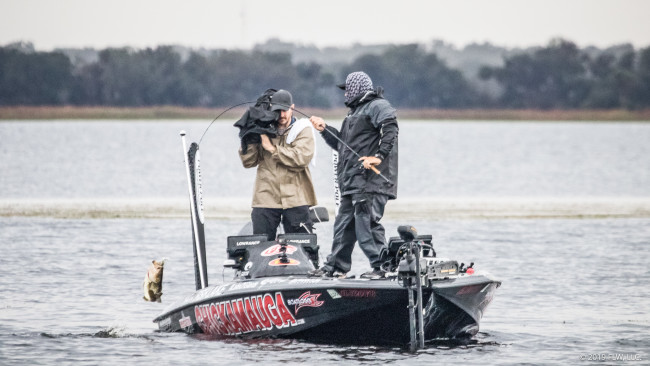 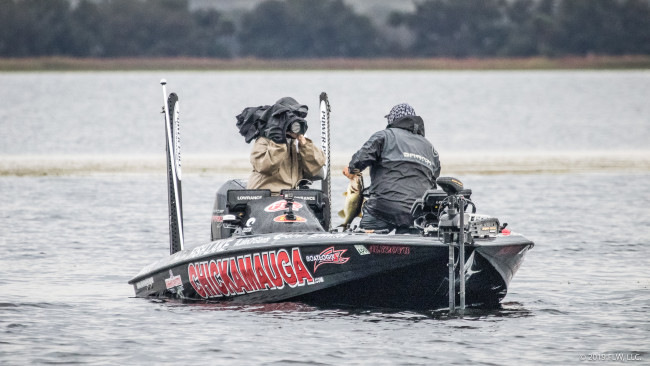 Buddy Gross made another cull. We’re not entirely sure what Buddy has because he hasn't actually been putting fish on a scale when culling, but it wouldn't be surprising if he was sandbagging his reported 21 1/4-pound limit. Someone will need to have a seriously good afternoon to catch up to the Georgia pro.

Cox just snatched a hawg from a bed in a canal. It is estimated to be around 7 or 8 pounds. That unofficially puts Cox about 10 pounds out of the lead with only four fish in his livewell. He also has two rats in his livewell that he could easily cull. 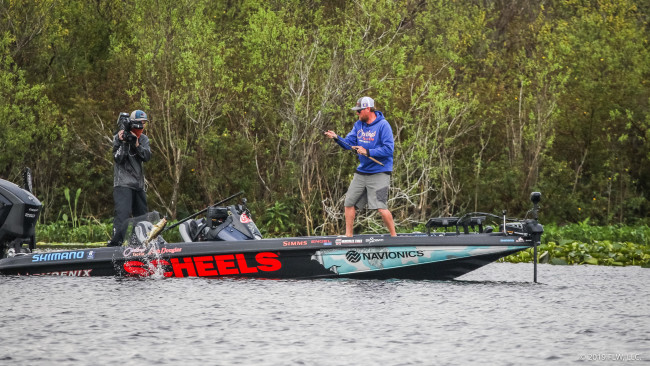 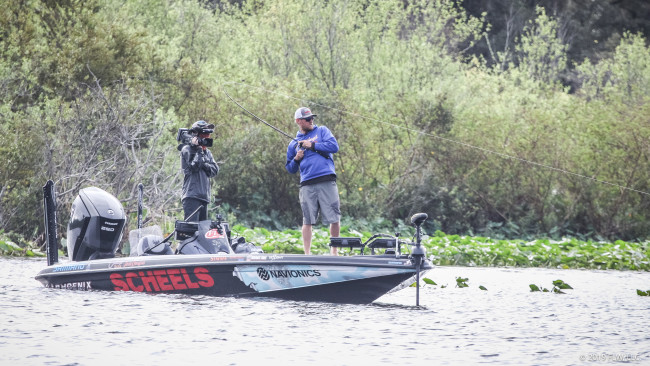 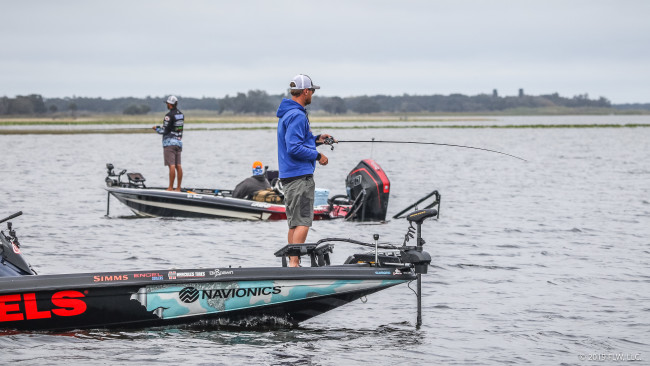 We’re getting back into that midmorning lull we’ve seen all week. The action is really slowing down. It seems like pros aren’t losing any hope, even if they haven't caught them good this morning. Guys like Josh Douglas and Darrell Davis could surely make some big moves on the leaderboard when their areas heat up.

FLW Tour rookie Wade Strelic is doing something a little different than the rest of the top 10. He is casting and reeling in a vibrating jig literally as fast as one can imagine. It’s worked so far today too, as he has a limit worth about 10 pounds. 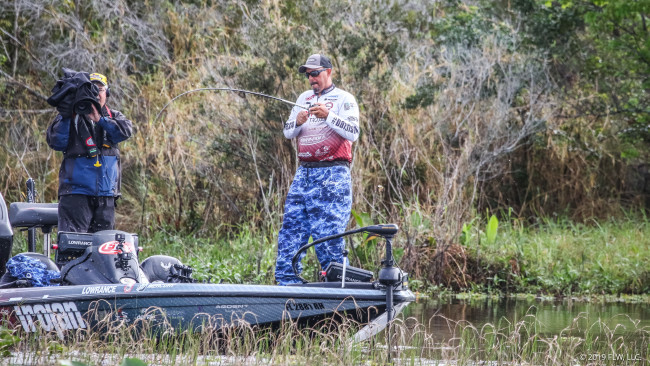 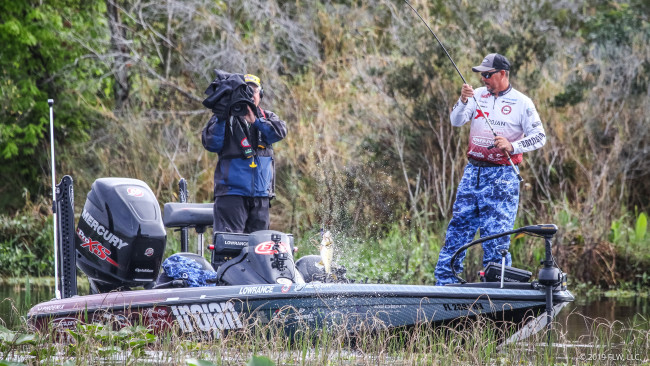 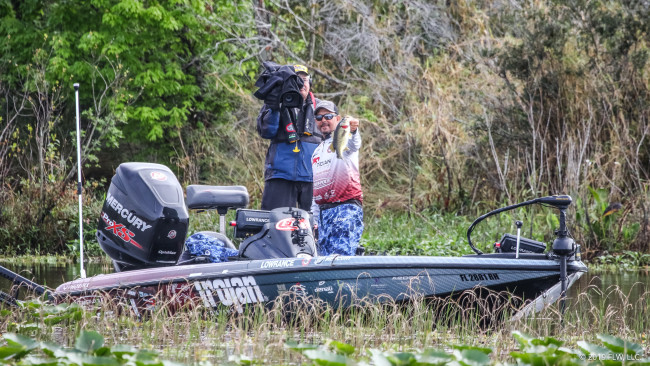 Darrell Davis finally has himself a limit. It’s not big, but it will take some mental pressure off the Florida pro. He needs at least three more big ones to make a run at winning this thing with Buddy Gross and Tommy Dickerson crushing them. “These fish weren't here in practice, they’re just coming up. We will come back later today and put a hurting on them.” The way he caught them late yesterday, there’s no reason to doubt it.

We have four reported limits so far (the three anglers mentioned above and Joseph Webster). Wade Strelic is one fish away from filling his limit. Around the rest of the field, John Cox is off to a slow start (save for a 5-pounder). Scott Martin has just one dink in the box. 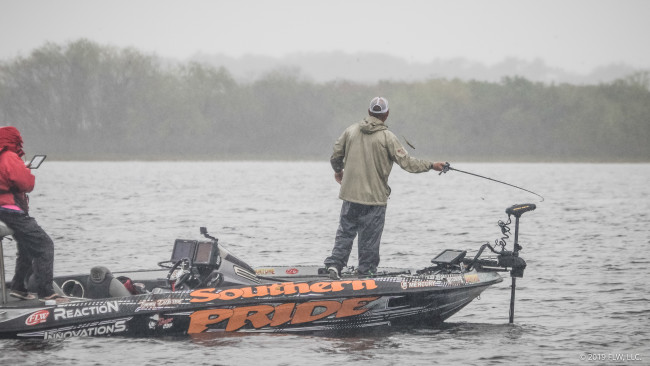 Tommy Dickerson is downright hammering on them. He went back to his shell bar from yesterday and is lighting them up again on a Bill Lewis Rat-L-Trap.  He has 24 1/2 pounds and a couple really nice kickers in that bag, including a 7-pounder and a 5 1/2-pounder. He doesn’t have a fish in the box under 4 pounds. Talk about turning on the jets when it really counts.

Joseph Webster continues to put fish in the boat. Unfortunately, they’re not all the quality he’s looking for. He still has about 15 pounds with his biggest fish being a 4-pounder. 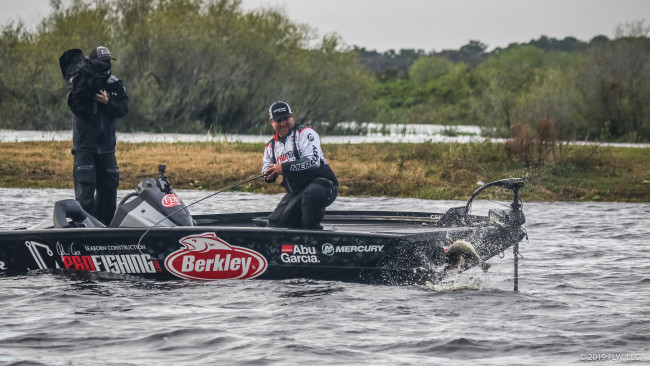 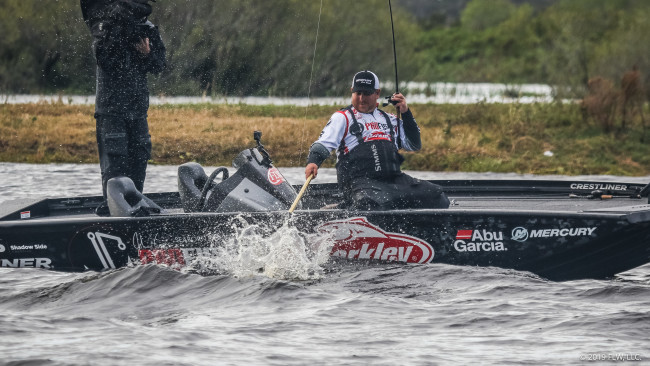 Buddy Gross continues his beatdown on his offshore hydrilla spot. He completed his limit with another solid 4-pounder. His swim jigs paired with a Scottsboro Tackle swimbait, all colored white, are his go-to.

John Cox has almost surpassed his total weight from yesterday. He decided to hit a shell bar this morning—something he has not done all week. His second fish was a 5-pounder that he caught on a Berkley Powerbait Wind Up worm.

FLW Live is now on the air. Be sure to head on over to flwfishing.com, YouTube or FLW’s Facebook page to check it out. Stay tuned all day for the best live coverage in professional fishing.

Darrell Davis is on the board in a big way, by the way. His first fish is a beautiful 6-pounder. He remains in 2nd place, mostly by virtue of Buddy Gross getting on them early.

Gross has a 4 1/2-pounder and a trio of 3s. After spending a ton of time rigging up, it’s clear he’s been making the right adjustments to catch them early and put some pressure on the rest of the field.

Joseph Webster is still catching them, too, but he hasn’t upgraded in a little while. He still has 13-14 pounds from that 10 spot, now sitting in 3rd place.

Scott Martin is on the board with a dink. Every fish helps, but he’ll need to get on some better quality fish from here on out if he wants to catch up with the likes of Gross and Davis.

Joseph Webster is coming in hot from the 10 spot. He has over 13 pounds already after having culled up several times this morning. He’s been on the water for about 40 minutes and it’s pretty clear he’s on them. Webster is tossing around a lipless crankbait in Kissimmee grass and “catching them so fast it’s hard to keep up,” per his marshal.

So far the only other update we’ve gotten is a pair of 3-pounders for tournament leader Buddy Gross. It’s been pretty quiet from everyone else, but Gross’ and Webster’s early success would suggest it’s only a matter of time before we start seeing more catches added to the leaderboard.

It’s raining pretty steadily on Toho this morning. “Not wicked hard,” per our eyes on the water, but it’s still coming down a good bit. Luckily, it’s fairly warm, and there doesn’t seem to be any precipitation yet on the south end of Kissimmee. 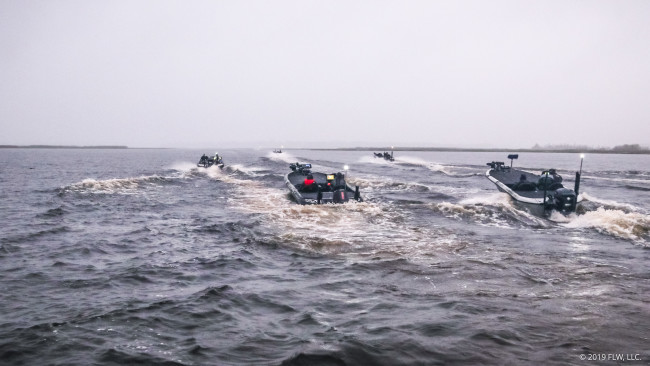 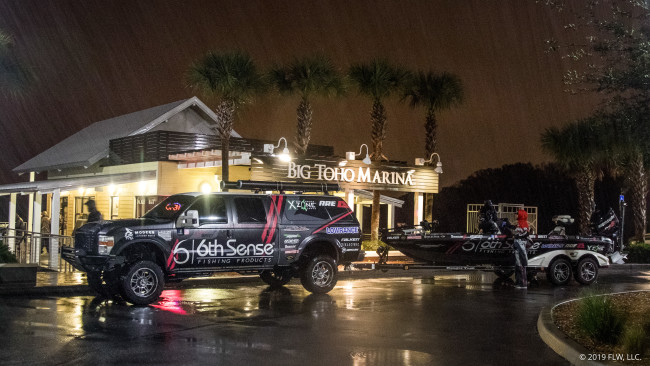 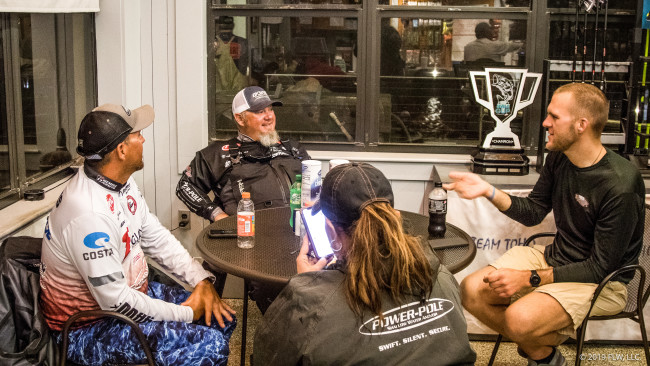 7:00 a.m. – The championship showdown is underway

Fewer than 9 pounds separate tournament leader Buddy Gross from Tyler Woolcott, who currently sits in 9th place, at the FLW Tour’s second stop at Lake Toho, presented by Ranger Boats. Joseph Webster (10th) is just over 10 pounds back of Gross, but the way the Kissimmee Chain has been producing this week, this tournament is truly still up for grabs for everyone still competing in this tournament.

Pros caught a lot of small fish yesterday, but there were plenty of big ones put in livewells and weighed in at Big Toho Marina as well. That’s the magic of these fisheries. All it takes is one big fish to make something special happen, and there are countless giants still swimming around out there.

As was the case yesterday, the weather is going to be a major factor on day four. There’s more rain in the forecast for earlier in the day, and while the sun might break through later in the way, a steady breeze (13 mph right now) and conditions that have been fairly stable since early yesterday afternoon could really produce some big bites early.

The final 10 pros have taken off. From here on out, this is a one-day derby within reach of anyone who can put together a giant bag of fish. Be sure to follow along with coverage both here on the blog and at flwfishing.com and the FLW Live show, which can also be found at FLW’s YouTube and Facebook pages in about 45 minutes.

Sky: Cloudy in the morning, some sunshine in the afternoon

Precipitation: Rain at takeoff, may clear later in the day