B. Lat Becomes a Champion 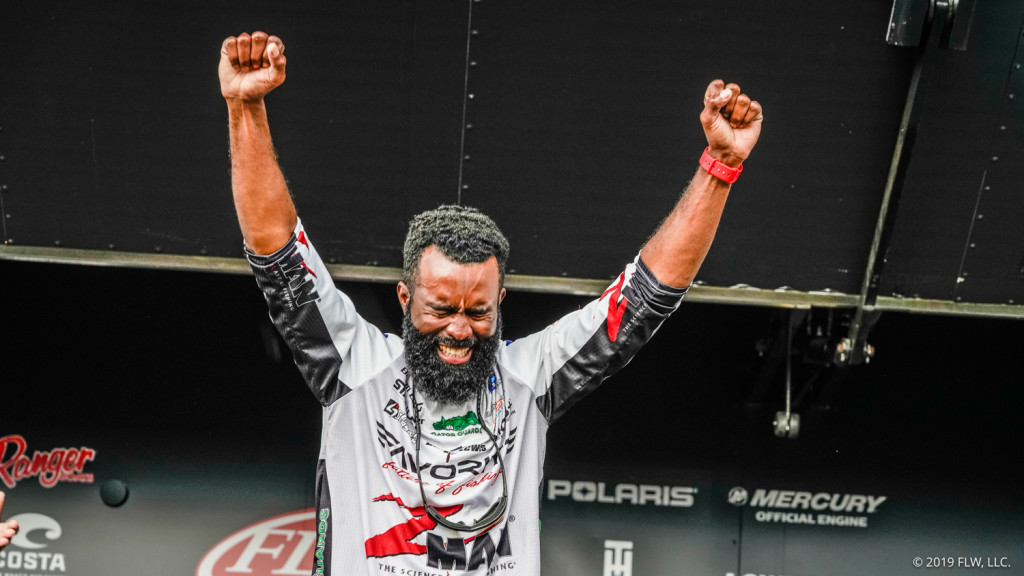 Brian Latimer has dreamed his entire life of being crowned an FLW Tour champion, and after years of hard work and dedication, it has finally paid off. The Belton, S.C., pro led coming into the final day of the FLW Tour event on Lake Seminole, presented by Costa, and though it wasn’t easy, he sacked up 21 pounds, 3 ounces to lock up the win with 80-15 overall. He edged out day-one leader Braxton Setzer by 2 pounds, 1 ounce in one of the most emotional victories seen on the FLW stage.

Get to know Brian Latimer

While his weights may reflect a somewhat easy week on the water, the truth is far from it. With just a handful of bites each day, “B. Lat” had to make them count, and despite losing some fish in the last few days, he stayed focused and determined, avoiding the dreaded spinout that many pros would experience.

“It happened,” Latimer says of his win. “It really happened.”

To make it happen, Latimer had to evolve over the week, adjusting to the fish as he went. While flipping shallow grass did much of the heavy lifting, without his cranking spot on day one to catch the majority of his 19-1 limit, who knows what would have happened?

“I caught my 19 pounds on day one cranking in the [Flint River],” he says. “On days two and three, I started in the river again hoping that would materialize again, because that’s easy, and I was hoping to catch a limit quick, but it never happened. So, today, I went straight down to my flat early so I could spend all my time where I’ve been catching my biggest fish. 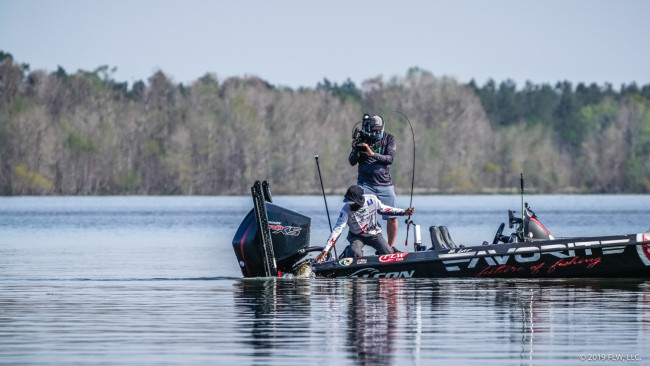 “It was slow, just like it’s been every day, and the first bite I missed – just didn’t grab it good. But I think the heartbreaker was my first two good bites I hooked up with, I lost them. I was really down and out, and then I caught that big one that was probably 7 pounds. Then, a few minutes later, I caught another one that was pushing 4.”

After getting those good bites, he boxed another decent keeper and hit a dry spell. With three fish in the box around lunchtime, things were starting to look like the tournament may not swing his way.

“I didn’t get a bite for a very long time after that, so I decided to go do something else and mentally reset,” admits Latimer.  “I went sight-fishing, found one right away, immediately cast over there, hooked up on the fish and it comes off. I was like, ‘Oh, it’s a bed fish, it’ll swim back.’ The thing never came back.”

The fourth-year pro brushed it off, as there were fish cruising everywhere up shallow. He shortly found another fish on a bed, flipped his drop-shot over, hooked it and lost it. His cool, calm demeanor was about pressed to the breaking point. He took it in stride, though, and decided it was time to abandon sight-fishing and go back to what got him to the final day – flipping grass.

“Looking back, losing those two fish won the tournament for me,” Latimer adds. “Because If I had caught those two, I would have continued sight-fishing, and that wouldn’t have given me enough to win. So, I went back out to the flat and caught two more 3-pounders.” 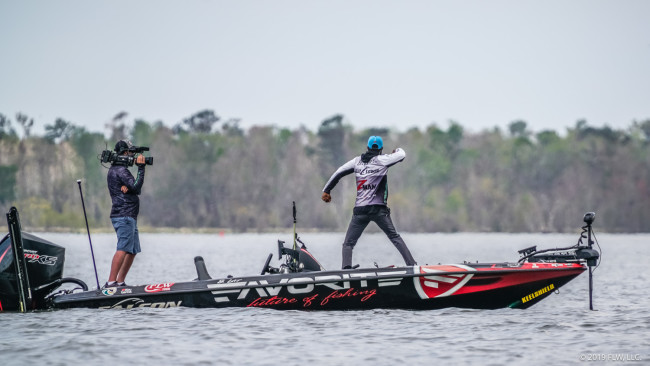 The juice for Latimer was a main-river flat in the Flint River. It had clumps of hydrilla (and other vegetation), and those clumps are where fat, sassy prespawn bass called home.

Latimer has fished plenty of tournaments on Seminole over the years and has learned what areas to focus on, but surprisingly, he inadvertently stumbled on what would become the winning spot.

“I was going to fish an island nearby, and I sat down short of it, looked down and saw some good looking grass,” he says. “I flipped around it and caught a 4 1/2-pounder. That was the only fish I caught from there in practice, but it looked good, and I thought it could be something to do if I needed to.”

He started the week catching his fish on a Bill Lewis MR-6, but the real hero was a Texas-rigged Z-Man Palmetto BugZ with a 1/2-ounce weight flipped on a 7-foot, 3-inch Favorite Phantom rod. The water in his area was dirty for most of the event, which is where the Palmetto BugZ shined. On day three, however, the water had cleaned up and he switched over to a wacky rig on spinning tackle to catch some key fish early.

Latimer’s pro career hasn’t been the smoothest ride so far, but it never damped his drive and determination – only fueled it. His rookie campaign in 2016 was his best season to date with a 46th-place finish in points, but the following two years found him in 63rd and 96th. This season started off tough on Sam Rayburn with a finish near 100, though he quickly rebounded at stop No. 2 on Lake Toho, where he placed 20th.

After his win this week, Latimer sits 17th in Angler of the Year points standings and is poised to make his first FLW Cup in four years as a pro.

“It’s so weird, I’ll be completely honest with you,” he explains. “I had what looks like a pretty bad year last year, but I’ve been catching fish for two years. For some reason, I’d catch decent ones in practice and in the tournament, they shrink. This year, the same thing is going on, but they’re the right size in the tournament. Nothing feels different; practice is still drama-filled just like it’s always been.

“You’d have to fish with me or fish tournaments at a high level to understand what I’m talking about here. Nothing’s really changed. I’m comfortable out there. I just catch what I can catch and do what I can do.” 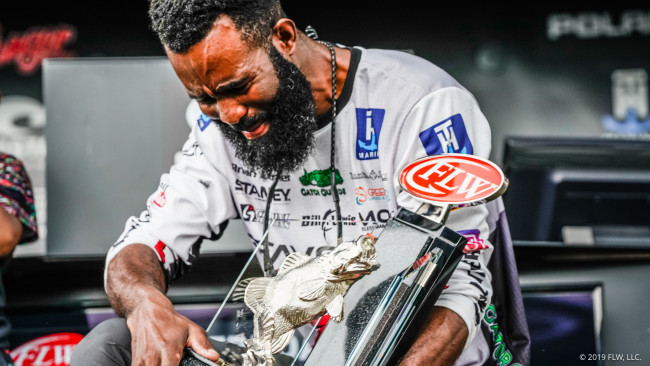 Latimer has paid his dues and put his time in across the FLW ranks from the T-H Marine Bass Fishing League (BFL) circuit, Costa FLW Series and, now, the Tour. His father, Jimmy, was a die-hard tournament angler before Latimer was born, so he really had no choice but to grow up around bass fishing. For lack of a better term, B. Lat was hooked from an early age, and it consumed him to the point where he quit sports in high school just so he could fish more.

Now, with the trophy and check in hand, the long hours on the water, time spent away from his family and money spent on fishing seem well worth it.

“Dude, you’ve got to trust the process,” he says. “I’ve been telling myself that for years. Just trust the process. Work hard, put your head down and don’t worry about it. Work and work and it’ll come.”