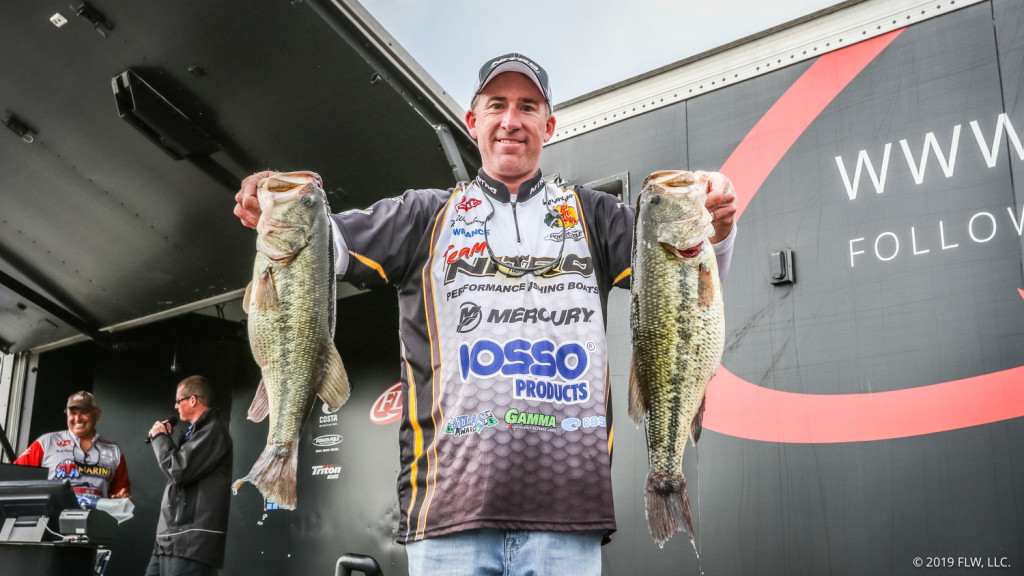 Most everyone said their practice on Grand Lake was brutal; Kyle Weisenburger included. Yet, while many allowed that practice to carry over into the tournament, Weisenburger kicked it aside in a big way.

Get to know Grand Lake

The Ohio pro was able turn one “good” bite in practice into 24 pounds, 12 ounces on day one of the FLW Tour event presented by Mercury. That put him almost 5 pounds ahead of second-place Todd Castledine and more than 8 pounds ahead of tenth-place Bradley Hallman.

“Sometimes, you have to go off the cuff and make decisions,” Weisenburger says. “I had to make a decision, and it turned out to be the right one.”

To be fair, after a miserable practice, Weisenburger admits it wasn’t too hard a decision to make a run to the only area that showed even a glimmer of promise for him in practice. Between falling water, falling water temperatures, muddy water and unstable weather, Grand Lake is hardly fishing like the historic fishery it’s known to be.

Thus, Weisenburger opted to hunker in his area and see if he could figure something out on the fly. Sure enough, he found a tiny pocket that allowed him to do that. 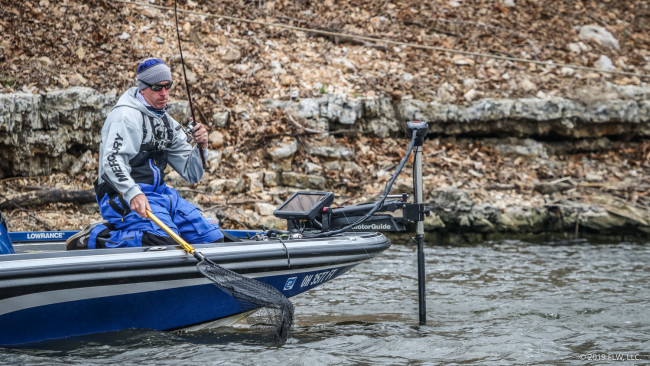 “I made a little move up shallower and caught one that kind of clued me in on something,” Weisenburger says. “After that one fish I started to play around and put together a pattern.”

Obviously, he’s tight-lipped about what that pattern is right now, but he says it’s a specific combination of location, lure and presentation.

He’s only using two lures, letting the conditions dictate which he throws at any given time. Though, one certainly outperformed the other today. Meanwhile, he has a main area he knows has more good fish in it – he left it after catching a pair of fish that wouldn’t help him, not wanting to burn them for tomorrow – but he was also able to run around his creek arm and replicate his pattern on a couple other spots.

All told, he figures he had a dozen bites, which was “quadruple” what he had in practice, and giving him even more optimism is he was hampered the entire afternoon when he broke his trolling motor cable.

“I’m excited,” says Weisenburger. “I know that one stretch has more good fish in it. Just have to try and duplicate it and adjust if I have to with the weather coming.” 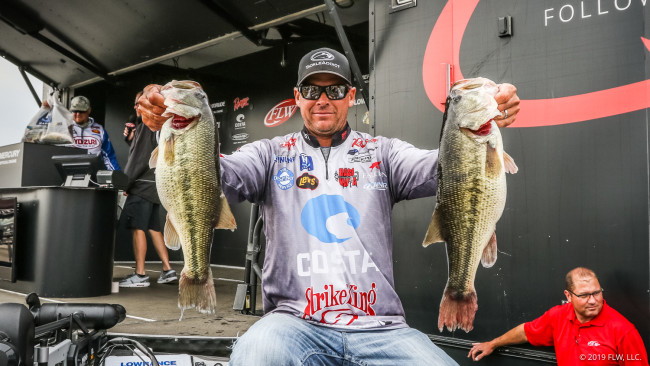 If this tournament started a couple days ago, Castledine would probably be a lot more excited about being the only other angler to crack 20 pounds. Unfortunately, it started today, and that means the conditions could cause his pattern to dwindle by tomorrow.

“They keep dropping the water, and that’ll kill my pattern,” Castledine says. “Honestly, I don’t know if I can get it to go tomorrow.”

Castledine figures the lake is dropping 6 inches a day, which would leave his shallow-water pattern high and dry. If that’s the case, he has another pattern that could produce some big bites, but not many. 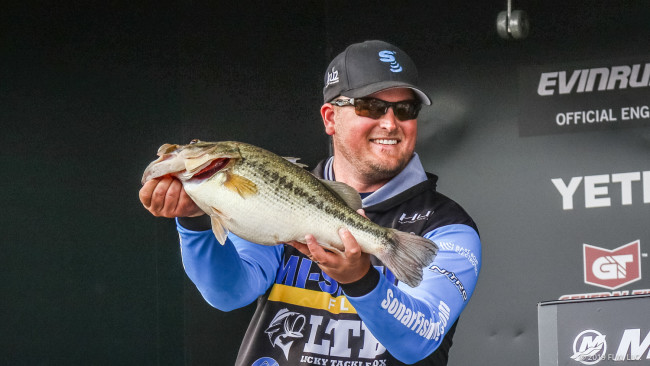 It’s amazing what a kicker can do.

Burghoff only had six keeper bites today. The first five went about 14 pounds, which he would’ve been thrilled with, as he still might’ve been sitting in the top 20. Then around 2 p.m. he got his sixth bite – an 8-pounder that took big-fish honors.

“I’d keyed in on a certain retrieve and was running new spots to try it out,” Burghoff says. “I went into this pocket I’d never fished, saw this textbook spot – a pole underneath a dock with shade. When I hooked her, I thought I’d rolled a carp.”

Similar to Weisenburger, Burghoff has a retrieve-location pattern going around areas he feels the fish are staging to spawn. 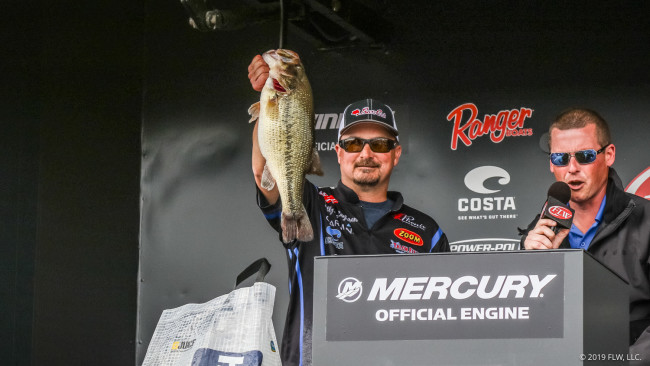 Sometimes all it takes is one bite to clue an angler into something. Certainly did for McCaghren.

After going 4 hours without a bite, the Arkansas pro got his first keeper bite around 11 a.m.

“That clued me in on something,” McCaghren says. “Then when my next bite was that big one (he had a 6-6 kicker) I knew I was onto something.”

Once again, it’s a specific location-lure-presentation deal, but making things more interesting for McCaghren is come the afternoon he also figured out another pattern.

“I wanted to fish a certain way that I really enjoy, and I finally was able to make it work this afternoon,” McCaghren says. “So I’ll have to decide which one I want to try first tomorrow.” 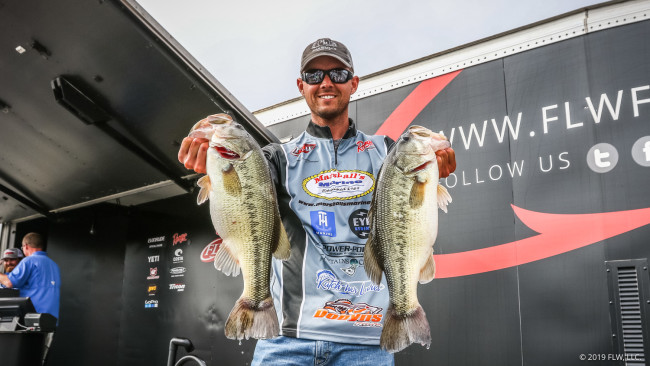 While Castledine is lamenting the falling water, Beavers feels it’s the only thing that saved him.

“Honestly, I didn’t expect to catch anything today,” Beavers says. “I just think the falling water has them moving around. It just must’ve shifted them to me.”

That said, it was hardly a banner day despite the outcome. Beavers only got seven bites all day, and he didn’t fill his limit until minutes left before check-in. 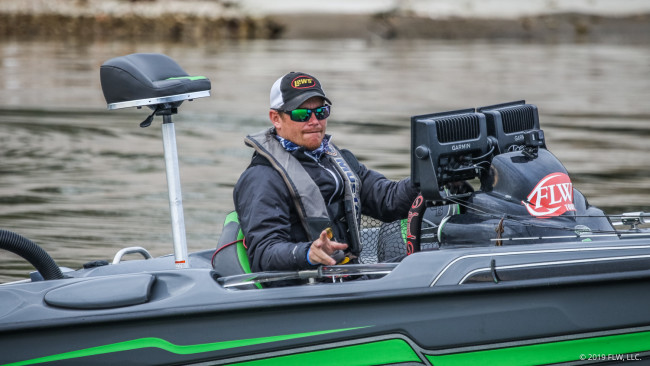 In a tough tournament, locals and their extensive knowledge often have a distinct advantage. Don’t tell that to the locals in this event.

Of the pre-tournament local favorites, few had even decent days. Bradley Hallman managed to put together the best “local” performance (he’s in 10th with 16-5), but he admits he didn’t get a bite until noon. Meanwhile, Sheldon Collings sits just outside the top 20 with 14-5 and Jimmy Houston in the top 30 with 13-11. 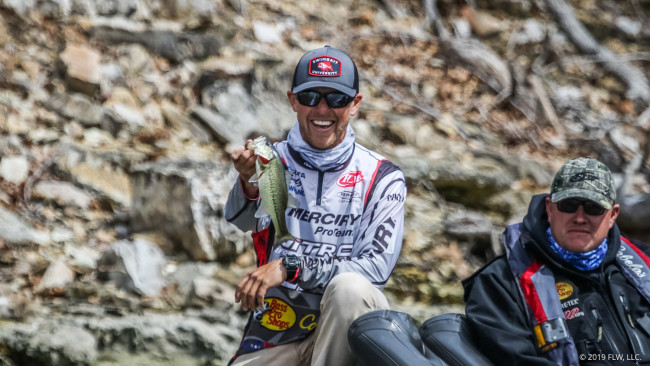 How tough is Grand Lake fishing? There were only 37 limits brought in on day one. There were almost as many who didn’t bring in a single fish (22 anglers) or who brought in only one keeper (28). 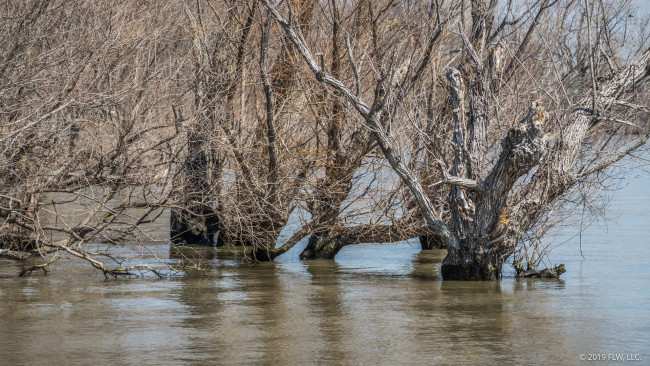 While there were no shortage of gripes about the conditions, the biggest worry for many anglers is the falling water. Castledine says he can see two different waterlines in his area and figures the lake is dropping 6 inches a day.

Many pros figured that, above anything else, is causing the fish to be in a funk, as they want to move up but are left in limbo as the water fluctuates.