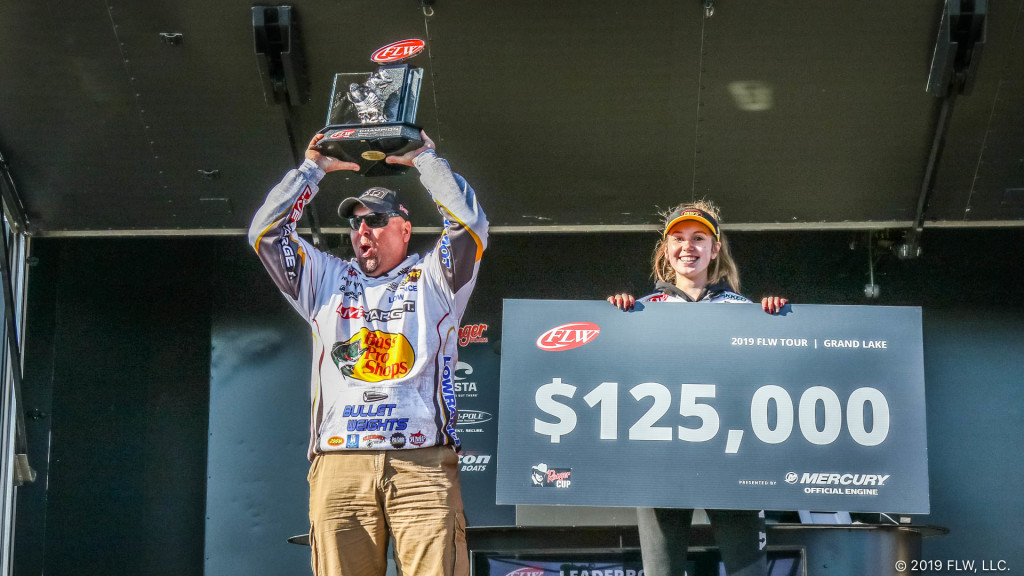 At around 10 a.m. today, Jeremy Lawyer caught a line-burner he figured he’d be embarrassed to weigh in. Turns out, that squeaker was one of the most important catches of his career.

You see, that little one allowed Lawyer to bring in a limit for 13 pounds, 14 ounces, which happens to be exactly what he needed to tie South Africa’s Michael Matthee at the final weigh-in at the FLW Tour event on Grand Lake presented by Mercury. While both Matthee and Lawyer weighed 62-12 overall, the tiebreaker was the previous day’s standings, which Lawyer held the advantage thanks to being in second-place going into the final day, giving him his first Tour victory.

“This is unbelievable,” says Lawyer after his victory. “Years ago, Greg Bohannan told me of the power of five fish. Well, I sure am glad [that little fish] came along. That’s a fact [that’s the most important little fish I’ve ever caught].” 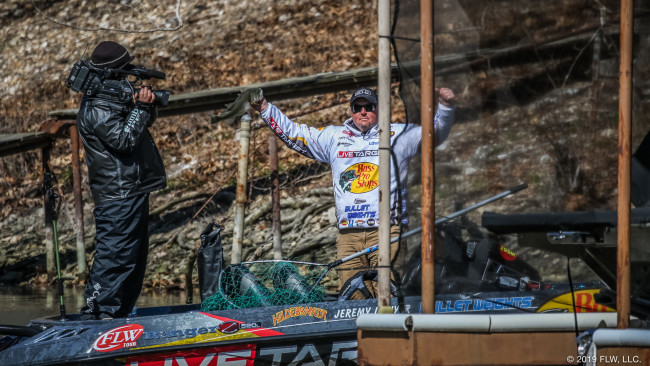 In what turned out to be a brutally tough event due to falling water and inconsistent weather, having decades of knowledge on Grand Lake was a distinct advantage for Lawyer. Not only has he fished the lake since he was 10 years old – he lives only an hour away in Sarcoxie, Mo. – but he’s fished nine previous FLW events there, having made the top 10 five times and finishing second in a T-H Marine Bass Fishing League (BFL) event back in 2015.

That knowledge allowed him to make the biggest decision of the tournament even before it began.

“Once I realized how tough a tournament it was going to be the first day of practice, I decided I wasn’t going to practice on anything I might fish come the tournament,” Lawyer says. “I didn’t want to catch a big fish I felt I could’ve used in the event, or not catch anything and get all messed up between the ears.

“So I made the tough decision to fish off the cuff. I think that was the biggest thing.”

So for the first two days, Lawyer fished entirely new water he’d never even driven by in practice. That said, he knew what’d he’d be doing, which was hitting the backs of docks with a spinnerbait.

Lawyer loves his spinnerbaits, and he cycled through five different ones on any given day, including ones from Freedom Tackle and Nichols Lures, along with a host of homemade versions. Regardless of the spinnerbait, he swapped out all the blades to Hildebrant blades.

“It’s almost overwhelming with me and spinnerbaits,” says Lawyer. “Each one has different wires, which means each has a different vibration. You just never know which vibration they’ll want, because that’s often more important than the color.” 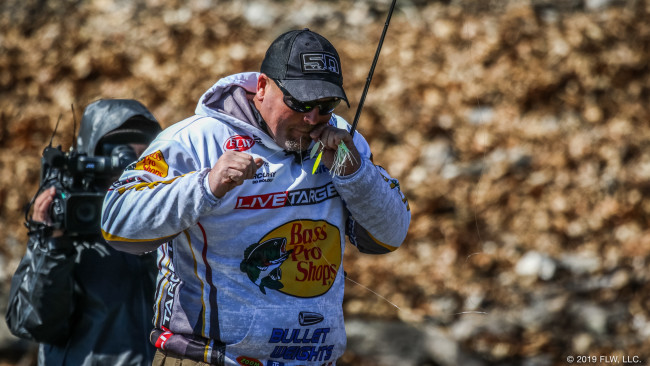 Along with changing spinnerbaits, Lawyer was constantly hitting different docks, hitting ones in creeks everywhere from Honey Creek all the way to the dam. Which dock was better than the rest changed every day, as the falling water seemed to reposition them and make bites come randomly. The only consistency was Lawyer targeted ones with 7-10 feet water depth under the walkways, as he felt it allowed the bass a little more security in the falling water as opposed to docks in shallower water.

“If there was a piece of wood behind the dock, it was a bonus,” Lawyer says. “But the key was just hitting as many as I could as I slow-rolled that spinnerbait.”

A perfect example of how much he constantly had to refind his fish came Saturday. It took him until 1:35 p.m. before he caught his first keeper. Yet, once he found them, he was able to finish out a 17-pound, 9-ounce limit within 45 minutes.

That gave him plenty of confidence going into today, especially when he had a limit by 11 a.m., as he figured he could bank on an even better afternoon bite with the sun warming things up. Instead, he never got another bite.

Fortunately, he didn’t need it, though it made things real close at weigh-in.

“Woof,” Lawyer says of his close weigh-in. “What a deal. Can’t even describe it.”

At this point, Lawyer’s trophy case is getting pretty impressive.

In 2016 he won the BFL All-American, one of the toughest tournaments to win in the sport. Last year he won a Costa FLW Series event on Lake of the Ozarks. Now, he’s an FLW Tour champion on a lake he’s fished his entire life.

“Years ago, I dreamed of just getting a chance to fish the BFL All-American,” says Lawyer. “Then when I won it, I thought that was everything. Now, years later, to win a Tour event on this lake, in front of friends and family, it’s about as good as you can ask.” 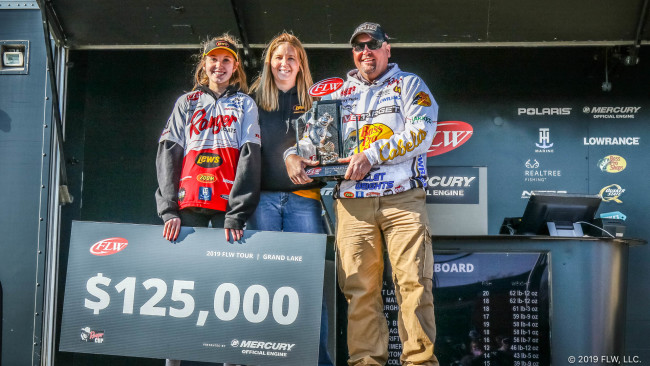