Upshaw Still Up at Cherokee 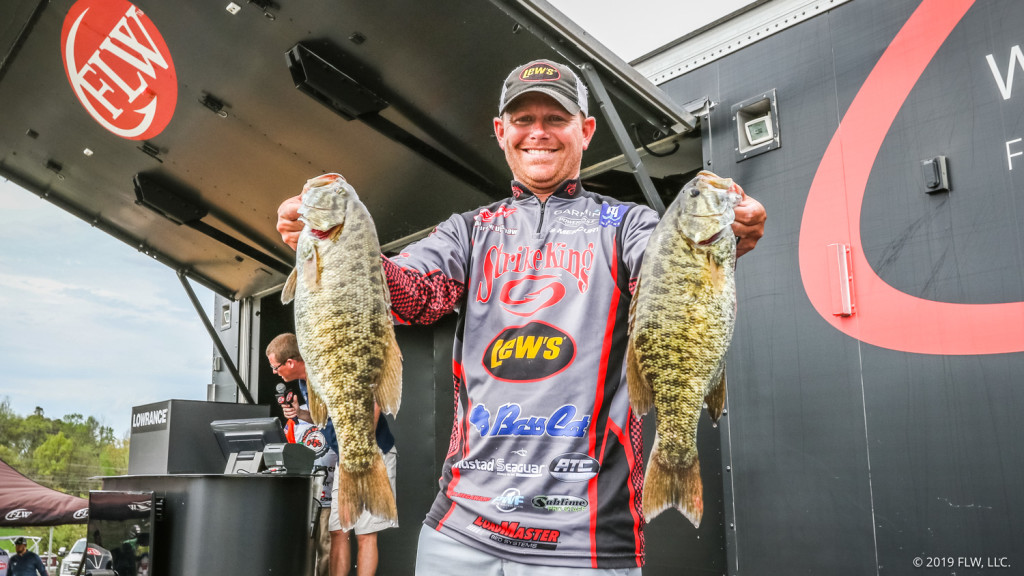 Day two of the FLW Tour event presented by Lowrance on Cherokee Lake again featured great fishing and remarkable consistency from most of the field. Still on top, Andrew Upshaw weighed 17 pounds, 14 ounces of smallmouths to up his two-day total to 36-4.

In second, Dylan Hays dropped off the pace slightly and weighed in 16-11 for a 34-8 total to lurk a bit less than 2 pounds behind Upshaw. Overall, 18 pros weighed more than 16 pounds on day two, and 28 pros have amassed totals over 30 pounds to this point.

Upshaw's lead story from day one

Upshaw, perhaps more than anyone else in the field this week, showcased remarkable consistency and the ability to find and land key bites. He didn’t change up much on day two – except for running some water he didn’t hit on Thursday – and that should be extremely troubling for the pros trying to keep pace with the Tulsa, Okla., pro.

“My bite is all day,” Upshaw says of the sometimes-small windows pros have to exploit key bites. “I just haven’t got to fish all day. I’ve stopped fishing my stuff at 10 o’clock every day.”

Day two was no exception, as Upshaw landed a 4 1/2-pounder almost first thing Friday morning. It’s a class of fish that is few and far between on Cherokee, despite the massive numbers of quality bass in the fishery. 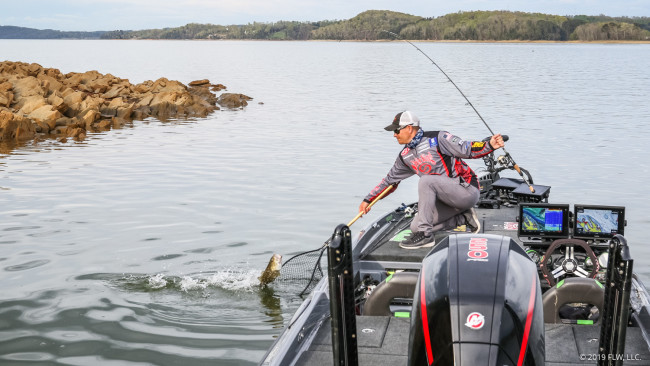 “I started right where I left off when I caught my last big one yesterday,” he explains. “I started on the exact same spot, went down through there and caught a 4 1/2-pounder and a 2 3/4.

“A 4 1/2-pounder is a big deal here. Three-pounders, these guys are catching 3-pounders and a lot of them and so am I. But catching a 4-pounder is really hard, and today I was just fortunate enough to do it.”

Because Upshaw was able to secure a sizable limit early on day two fishing the same way he did on Thursday, he had plenty of time to run some different water and figure out where he can still get bit away from his primary areas. In addition, he says he found something later in the day on Friday that could be the deal if he makes it to Championship Sunday.

“I did figure out something late in the day today,” he admits. “I just started practicing and trying to figure out a way I can catch them completely different than what I’m doing, and I was able to catch about 14 pounds doing that very consistently – not spawners, which was nice. I’m not really worried about that for tomorrow. That’s more of a day four kind of thing.”

Having back-to-back stellar days are one thing, but putting yourself in position to potentially go wire-to-wire is another. Unless something changes drastically, Upshaw will be fishing on Sunday. It’s all going to come down to how he handles the pressure on moving day.

“Tomorrow I’m going to go swing and try to catch another big bag, and if I struggle late I can just go and try to catch a decent bag,” Upshaw says. “If I can get any calm condition, I don’t care if it’s sunny or cloudy, whatever, if the wind doesn’t blow an extreme amount I’ll catch them.”

With the way he’s been crushing them so far this week, there’s a more than decent chance he will catch them, and that’s very bad for the rest of the pros who just made the top-30 cut. 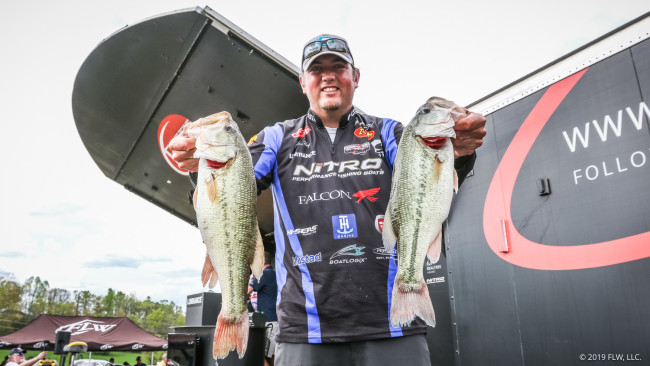 Dylan Hays backed up a strong day-one performance with another quality bag on Friday, and despite not matching his previous weight total, he did more than enough to remain within striking distance of the lead heading into moving day.

Hays is fishing a stretch of water that he’s had almost completely to himself, and he’s catching his fish a lot differently than the spinning rod-wielding majority. As a result, he’s predominantly catching largemouths, and many of them are the right quality to get the job done.

“Today I had a pretty solid bag pretty early, and I knew I could largemouth fish all day long,” he explains. “I caught more keepers, and I ended catching a 3 1/2-pounder late in the day I wouldn’t have had had I been sight-fishing.”

With a quality stringer early in the day, Hays was able to run some new water and identify some stretches he’ll be able to hunt for kickers on day three.

“I ran some new stuff,” he adds. “I found a couple stretches. One stretch I culled three times off it and weighed two of them. I saved the rest of them for tomorrow. I was culling ounces, and then I culled a pound and I figured I didn’t need to burn anymore 2 1/2-, 3-pounders.”

While Hays says he didn’t find any “magic stretches,” he’s shown so far he doesn’t need any to make a run at winning this tournament. 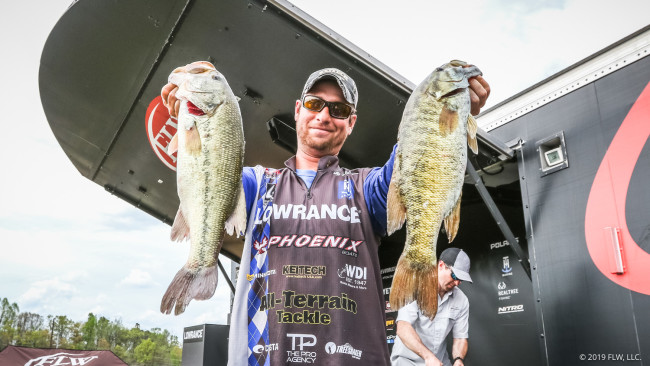 Catching brown bass is something Austin Felix does with aplomb, so his third-place standing on Cherokee through two days shouldn’t come as a surprise to anyone. Provided the weather cooperates on day three and he’s able to keep running a similar pattern to that of days one and two, Felix will be fishing on Sunday.

Felix marked a handful of 2-pounders he found today, and he plans to catch those fish early in the day on Saturday before running some new water. His pattern is repeatable, just so long as the weather doesn’t do anything too crazy.

“Cloudy and calm, that’ll be fine,” Felix says. “I’ll be able to see everything. I just have to put it in front of a bigger one.”

After day one, Felix wasn’t sure how many fish he’d have left on Friday. As it turns out, he had plenty, and the now 30-boat field should further ease concerns about fishing pressure on Cherokee. Now, it all comes down to tacking on one more great day of fishing to try and make it to the final round on Sunday. 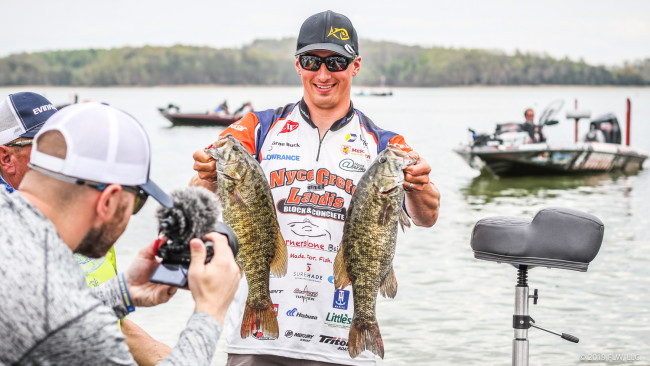 Grae Buck made a big jump on day two running and gunning in mostly new water. His pattern – “fishing anything that looks like they could possibly spawn on” – worked to the tune of 17-10 to back up his 16-6 stringer from day one.

In practice, Buck spent a lot of time targeting prespawners further out from bedding areas, but after a warm off day (the day before the tournament), fish moved up enough to allow Buck to target beds with a shaky head and a finesse worm.

“In practice, I was fishing out and looking for more of those prespawners,” he says. “I was catching a couple shallow around these rocks that they were getting ready to spawn on. I had a general idea of what was going to be going down, but that warm off day really pushed them up even more than I realized.

“I went and fished some largemouth stuff the first morning, and I had a couple small ones, and then I started running some of that just looking around. I pulled up on one point and I caught four off of it in probably 15 minutes.”

From then on, Buck started targeting any spot he thought looked like a prime bedding area. He ran a lot of new water on day two, and, with the exception of an area he tossed back some 2-pounders on day two, he plans on running a bunch of new stuff on Saturday as well. 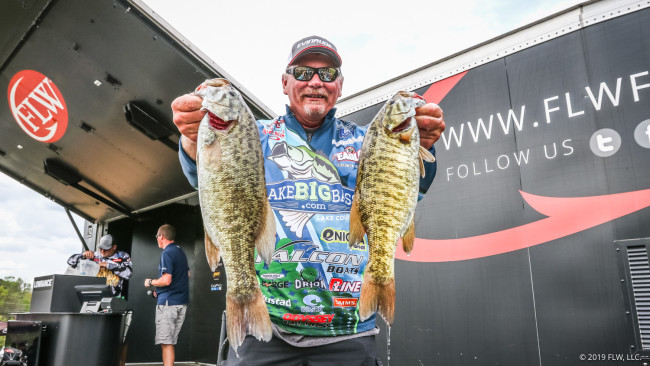 Tim Frederick had a limit within the first hour of fishing on day one. Friday, it took him nearly four times as long, but good things sometimes come to anglers who wait.

Milking the same area as he did on Thursday, Frederick slowly and methodically picked apart spots he knew fish were spawning. But it wasn’t until a slow start prompted him to move to some new areas that Frederick’s day really kicked into high gear.

“I never fished it at all yesterday because there was so much boat traffic,” he explains. “It didn’t look as good to me, honestly. “I was looking for some new stuff that’s close by, because that area for some reason holds big fish.”

Frederick has been bouncing around within the same one-mile area near mid-lake. He knows there are big fish in that section of the fishery, and his plan tomorrow is to avoid wading through a lot of smaller fish to find the difference-makers.

If he’s able to land that fish first thing in the morning, it will be an immediately better start than he had one day two, though it’s hard to complain when the result is a bag that keeps you firmly in the top five ahead of moving day. 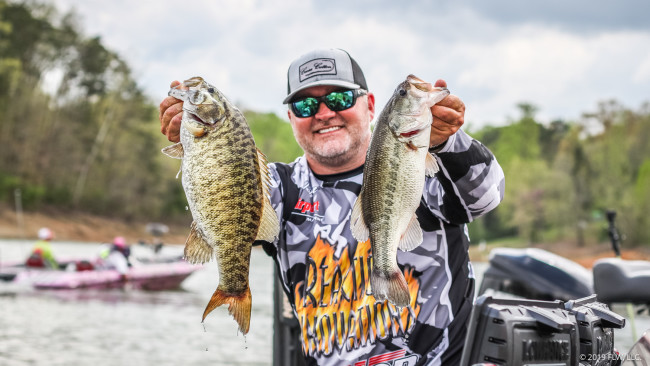 After 144 five-bass limits were weighed in on Thursday, it seemed like Cherokee couldn’t possibly fish any better on day two. Instead, three additional pros weighed in a full stringer for 147 total limits.

Cherokee might not produce many trophy bass, but it sure shows out in the numbers department. And given how diverse the fishery is – having healthy populations of smallmouth, largemouth and spotted bass – it’s truly astounding how many quality fish are in the eastern Tennessee impoundment.

It’s a guarantee there won’t be as many limits tomorrow, but the percentage of pros weighing in limits could be even higher. Don’t expect to see more than a couple anglers with less than five fish in their bag on Saturday. 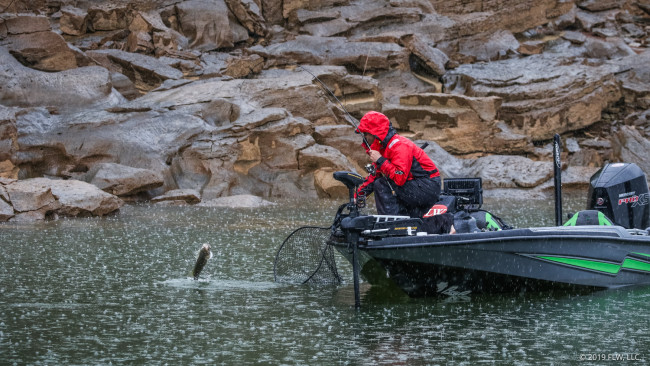 Initial forecasts called for all-day rain and wind on Friday, but that didn’t prove to be the case. Aside from a somewhat brief drizzle late in the morning on day two, the conditions weren’t all that unpleasant.

What’s actually surprising, however, is that drastically different conditions overall (cloud cover and some wind) didn’t do much to curb quality or quantity. The fishing was pretty much the same – or perhaps even better – than on day one.

The forecast again calls for an isolated storm or two tomorrow, but even if that does come to fruition, Cherokee is fishing well enough to not let a little thing like weather cool it off. 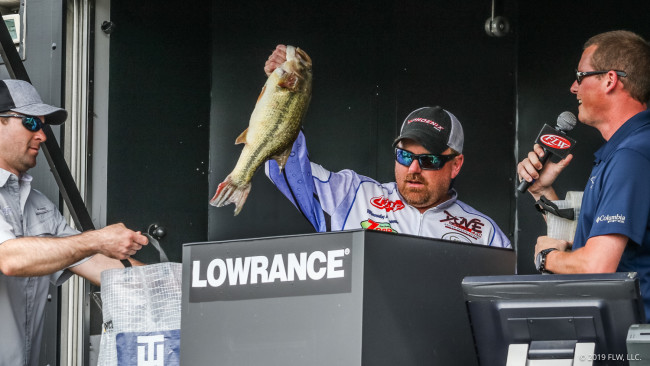 Hensley Powell won Big Bass honors on day two with a fish that weighed in at 5 pounds even, which is about in line with what everyone expected to be the case heading into this event. A 5-pounder leading the way at weigh-in highlights how crucial it is to catch bass in the 3- to 5-pound range this week. We haven’t seen a 20-plus-pound bag yet, and it’s going to take more than one of that class of fish to get it done.