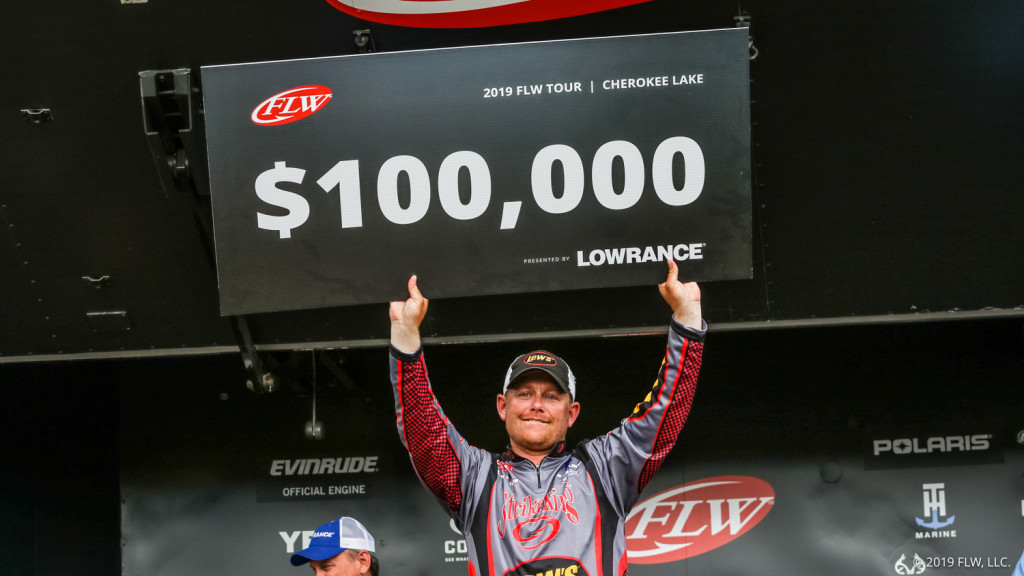 Going wire-to-wire to win an FLW Tour event, especially on a fishery like Cherokee Lake, isn’t something that happens by accident. It’s not all luck. It’s not all happenstance. What Andrew Upshaw did was a combination of skill, tenacity and mental toughness, plain and simple.

The Tulsa, Okla., pro won his first-ever Tour event this week, and he did it on Cherokee Lake, amidst a true slugfest, with haymakers coming from every angle. During the tournament, which was presented by Lowrance, 90.7 percent of the field turned in a five-bass limit over four days. All 30 anglers weighed in five fish on Saturday and all 10 of the finalists brought five fish to the scale on Championship Sunday.

Simply put, everyone caught fish this week. No one caught them better than Andrew Upshaw. 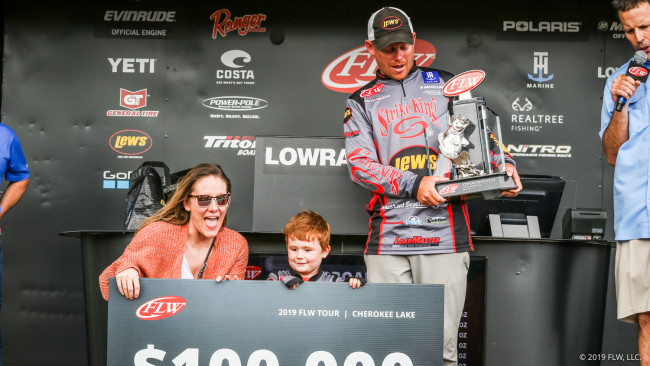 The 32-year-old eight-year Tour veteran didn’t find a magic stretch filled with big fish and he didn’t have a secret bait no one else was throwing. What he did have was a solid game plan, a belief in himself and a strong support system that included his wife, Valerie, and son, Cain, who made the trip from Oklahoma to be there throughout the final two days of the tournament and by his side when he raised the $100,000 check and winner trophy above his head Sunday afternoon.

“I wasn’t sure what I was going to do, but when my family got here, I knew what I needed to do and that was just to calm down,” he admits. “This morning I got to skip rocks with my kid…”

At that point, Upshaw welled up with emotion and paused for a brief period to reflect on what he had accomplished and what it meant to have his family there every step of the way. Those emotions stayed with Upshaw long after the weigh-in had ended, as fans asked for autographs and photos, and friends, family and competitors congratulated the two-time FLW Cup qualifier on his first-ever Tour win.

Upshaw acknowledged all of those people during his victory celebration on the FLW weigh-in stage, recognizing his friends (namely Tour anglers Jason Reyes and Scott Martin), competitors and family (including his father, a close friend and his in-laws, who all made the journey to eastern Tennessee). It was a classy gesture from a humble man who was just grateful and overcome with emotion after finally completing a goal that’s been with him for a long, long time.

Asked when the emotions would start to wear off and the reality to set in, he responded as anyone in his position would.

After the first couple days holding the lead on Cherokee, Upshaw admitted pressure and stress of the situation weighed on him. When his family arrived, he began to allow himself to calm down and just fish the way he had planned to fish. As it turns out, that plan was worth $100,000. 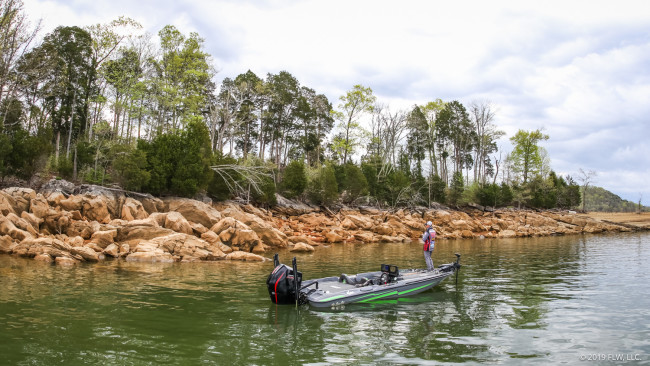 “It was pretty simple,” he explains. “I wanted to be around the deepest water and the steepest banks that had the big, what we call “dinosaur rock,” on it. The big pattern was it had to have boulders out in front and it. That was more important that it wasn’t a straight bank, it had to have somewhat of a turn. Those smallmouth were spawning in those turns.”

Targeting spawning smallmouths on mid-lake islands, Upshaw fished behind the boulders that peppered the shoreline – as opposed to in front of and behind them, as much of the field did this week.

Upshaw relied on a wacky-rigged 4-inch green pumpkin Strike King Ocho to catch most of his fish, casting behind those boulders and letting the bait do what it does. Unlike many of his competitors (many of whom tried the same thing with weighted baits), Upshaw was able to get his bait where he wanted it with the action it needed to have to entice the bedding fish to bite.

While that pattern was what got Upshaw to the finish line, it was a 3.25-inch ghost shad Strike King Rage Swimmer on a 1/4-ounce head that allowed him to cross it ahead of the rest of the 163-angler field. 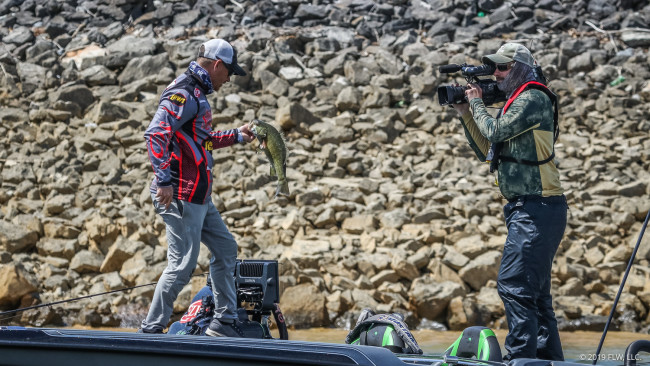 “Thankfully I had that backup secondary pattern that as soon as I pulled up with 40 minutes left I caught a 3 1/2 and a 2 1/2 that culled out two very, very little fish,” he explains. “Right out of takeoff, about a quarter mile up, there’s a couple points up there. The side of one point there’s a rock pile I think all my competitors missed. Not just a true pile of rocks – it had isolated boulders and only big ones were moving up on it. When you caught one there, it was a big one.”

When Upshaw ran to that rock pile, he needed big ones. The two he caught made the difference, edging out Harleysville, Pa., pro Grae Buck by just 1-2. Without those fish, Upshaw would still be hunting for his first Tour victory.

With the win, Upshaw puts himself in prime position to make his third FLW Cup. He started the year with a couple top-30 finishes (at Sam Rayburn and Toho), but a pair of triple-digit finishes at Seminole and Grand all but erased any momentum he had. As he tells it, his wife knew exactly what he needed to do to regain that forward motion.

“I started out the year super strong,” he says. “I made two back-to-back 30 cuts, and then I had two terrible tournaments at Seminole and Grand, and I dug myself a pretty big hole. My wife had mentioned to me that the only way you’re going to move up is you’ve got to win, and so I fished to win this week, and it just, it doesn’t always work that way. I fish to win every week, and it just happened this week.”

Upshaw always fishes to win, and that was never more apparent to Upshaw himself than when he made the decision to go for broke on Sunday, changing the plan he had in his mind following another strong showing on day three. Instead of going to where he knew he could catch a small limit early – as he had in mind – he stuck to his guns and went to where he knew the big ones were. 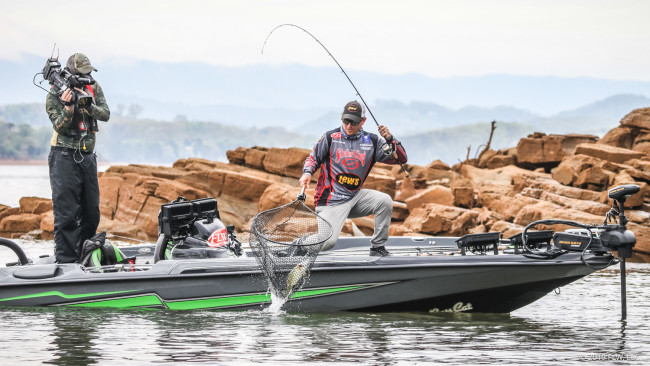 Making calls like that are what instill confidence in an angler, especially one who now has a Tour win under his belt. Upshaw knows what it takes to win, and, more importantly, he knows what it feels like to be an FLW champion. And right now, that feeling might be enough to carry him all the way to another FLW Cup.