Ned rigs and shaky heads dominated for the top 10 pros 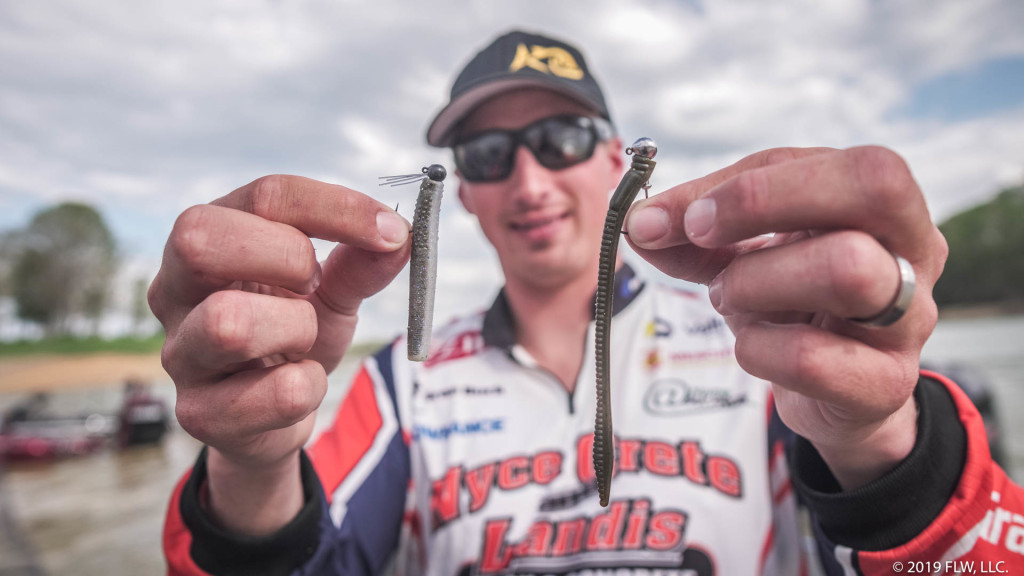 Stop No. 5 of the 2019 FLW Tour on Cherokee Lake, presented by Lowrance, was more or less an all-out smallmouth slugfest, and as such, the top 10 dominated primarily with finesse tactics and many of the same go-to smallie baits.

A couple pros spent some (or lots) of their time targeting green fish, but it was the brown variety that got the job done in the end.

Here’s a look at what the top 10 threw at Cherokee’s tremendous bass population. 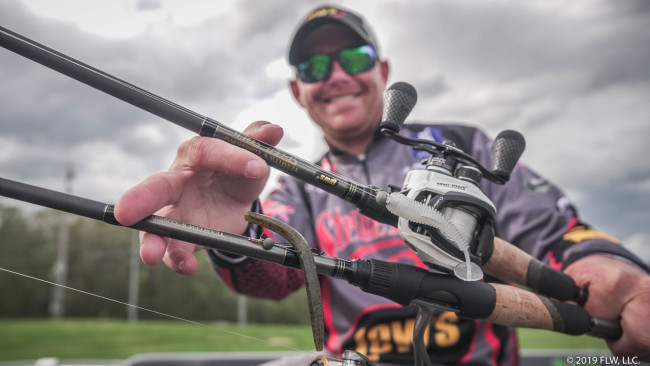 1. Andrew Upshaw wacky-rigged a 4-inch Strike King KVD Perfect Plastics Ocho in green pumpkin to catch most of his fish behind boulders that held spawning smallmouths, and he used a 3 1/4-inch Strike King Rage Swimmer for the day-four kickers that he pulled off a rock pile not far from the takeoff ramp. 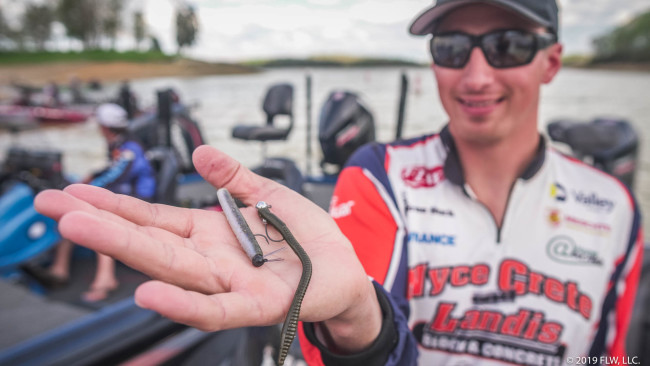 2. Grae Buck caught most of his fish on a shaky head equipped with a Cornerstone Baits Finny Worm that he chopped down to about 4 inches. He also caught some fish on a 1/13-ounce Hayabusa Brush Easy jighead with a Z-Man TRD. 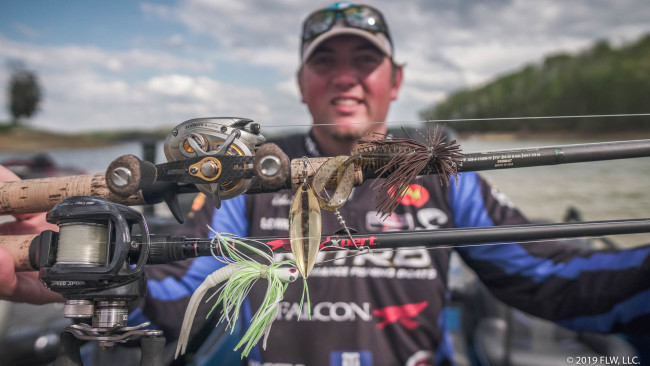 3. Dylan Hays’ bait of choice for Cherokee largemouths was a homemade 1/2-ounce flipping jig with a Zoom Z Craw Jr. trailer the first three days and a Zoom Big Salty Chunk on day four. He also weighed in two fish on a Phancy Lures tandem-blade white and chartreuse spinnerbait with a white Zoom Split Tail trailer. 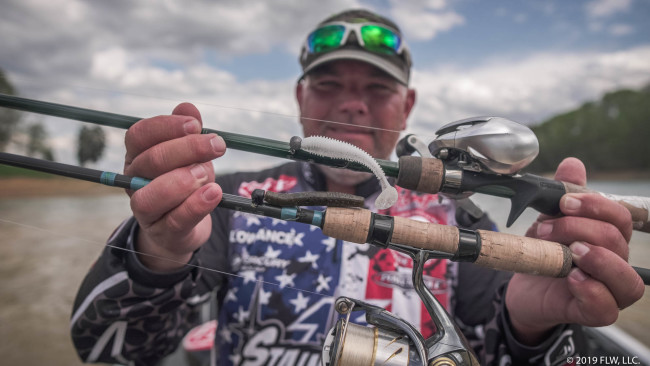 4. Jason Reyes mainly relied on a Z-Man Finesse ShroomZ Ned rig head with a green pumpkin Z-Man TRD to catch his fish. He rigged that on a G. Loomis 822 spinning rod and a Shimano Stella reel spooled with 6-pound-test Seaguar Tatsu fluorocarbon. He also tossed around a 3.3-inch Keitech Swing Impact FAT. 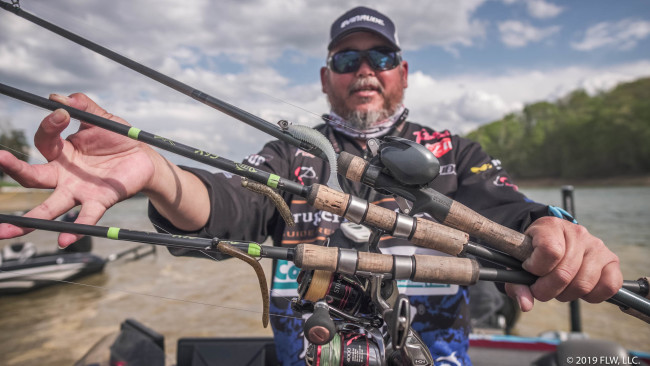 5. Andy Young used a 3/32-ounce Outkast Tackle Perfect Ned Head with a 2/0 hook most of the week. He tipped that with a Z-Man TRD, which he threw on a G. Loomis E6X 7-foot, 5-inch, medium-power, extra-fast-action rod and a 4000-size Shimano Stradic Ci4+ spinning reel spooled with 20-pound-test Sunline PEx8 braid and a 10-pound-test Sunline Shooter leader. Young caught his day-four kicker on a 4.2-inch Keitech Swing Impact FAT on an Outkast Tackle Golden Eye Swimmer head and also used a shaky head with a 4-inch Zoom Finesse Worm. 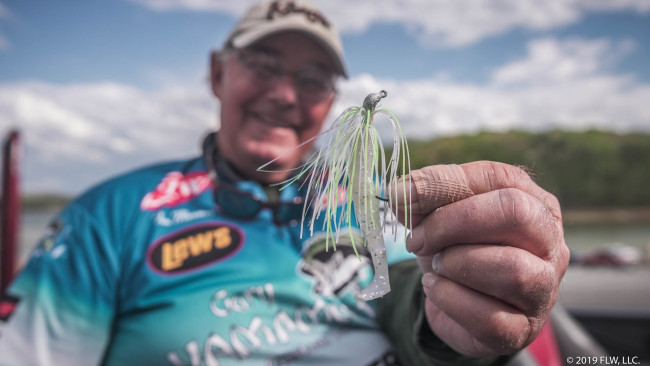 6. Tom Monsoor’s homemade swim jig did all the heavy lifting at Cherokee. He opted for a white jig with a 3 1/2-inch Yamamoto Swimming Senko (also white). 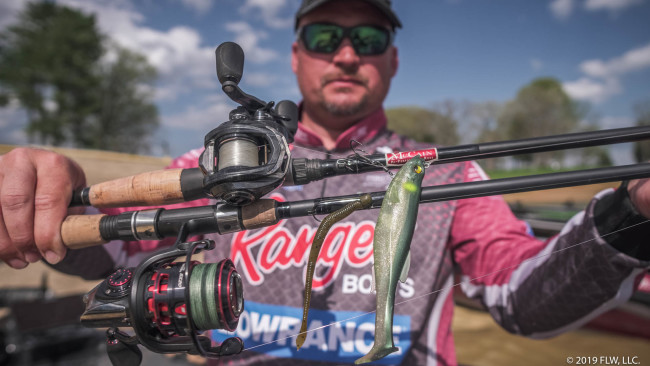 7. Tim Cales used a Yamamoto Kut Tail Worm on a shaky head to target smallmouths and a Megabass Magdraft swimbait to go after largemouths. 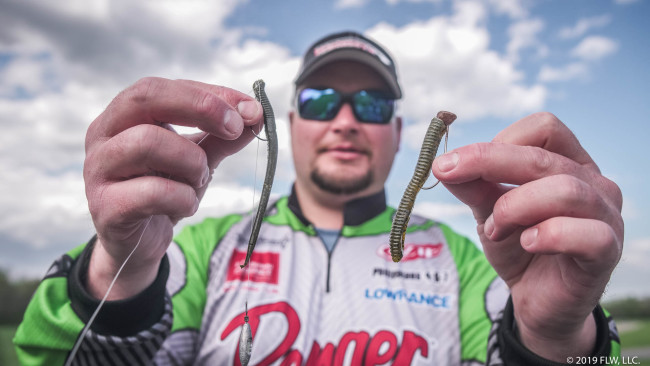 8. Derrick Snavely utilized a V&M shaky head with a V&M Pork Pin worm (which he also used on his drop-shot setup) and a V&M J-Mag worm to get after his smallmouths. When he needed a big largemouth bite, Snavely used an Evergreen JT topwater and a 1/2-ounce V&M Cliff Pace The Adrenaline Pacemaker flipping jig. 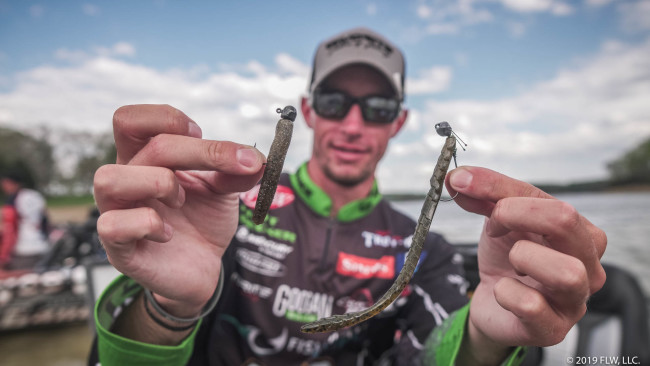 9. Matt Becker used a BassCave Custom Tackle Dead Head for his Ned rig, which he tipped with a Z-Man TRD in green pumpkin, but his best tactic was tossing around a Perfection Lures Sure Hook-Up shaky head with a green pumpkin Googan Baits Slim Shake (with a bit cut off). 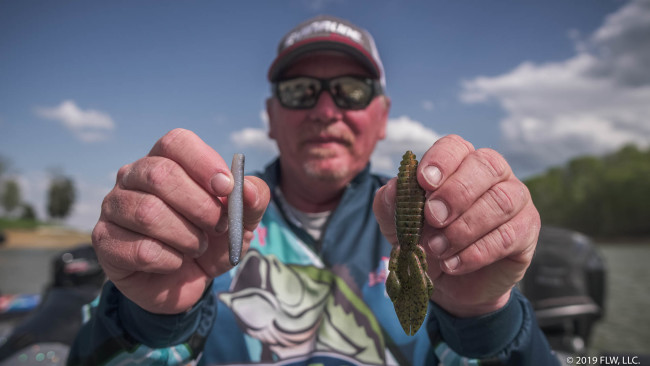 10. Tim Frederick used a Z-Man Finesse ShroomZ Ned rig head with four different colors of the Z-Man TRD and Z-Man TRD MinnowZ to do most of his damage. He also mixed in a stand-up head tipped with a Strike King Rodent.