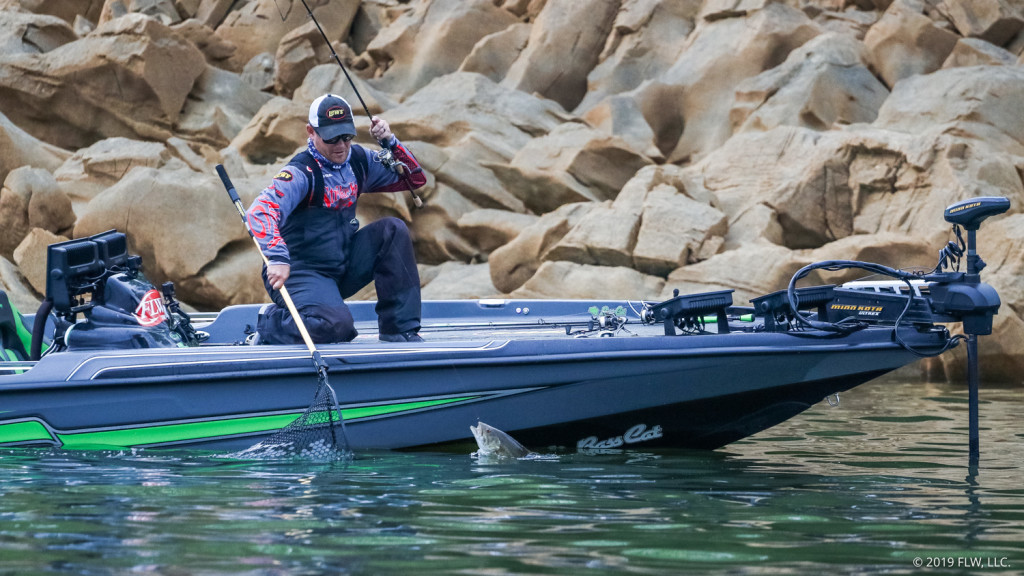 Andrew Upshaw picked up his first FLW Tour win doing something very similar to almost everyone else in the tournament field. He executed his game plan to perfection, though, and the result was a $100,000 payday.

The Tour’s fifth stop of the season, presented by Lowrance, saw masses of smallmouths caught during the four days on Cherokee. With the fishery’s smallmouth bass in full spawn mode, it came down to finesse tactics and spinning rods in shallow water, save for a couple important exceptions.

We break it all down right here. 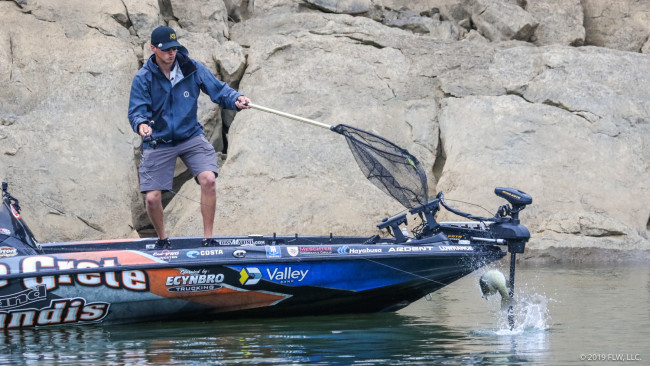 The fish Buck fell in the water chasing ended up in his livewell before day three was over, and it helped him amass a four-day total of 66-8 and a $30,200 payday. It was one he caught throwing finesse baits at cracks and transitions on chunk rock banks – something most of the field was doing during the tournament.

Buck stayed in the mid-lake area, predominantly running new water each day to find new fish utilizing his primary pattern. On day four, he started in Panther Creek (where he did well to end day three) and had a limit before 9:30.

Unfortunately, that limit would remain as-is the rest of the day, as he was unable to find better kickers than the ones he already had.

“I think the biggest key now, looking back at the tournament, I figured it out about halfway through the [final] day,” he explains. “I really started keying on those main-lake chunk rock and boulders and cracks in the rocks. Those bigger fish seemed to be gravitating toward that. They wanted deep water right nearby them.”

By the time Buck figured that out, it was already too late. Upshaw cashed in on a key spot just 40 minutes before check-in to retake the lead.

Buck caught most of his fish on a shaky head equipped with a Cornerstone Baits Finny Worm that he chopped down to about 4 inches. He also caught some fish on a 1/13-ounce Hayabusa Brush Easy jighead with a Z-Man TRD. 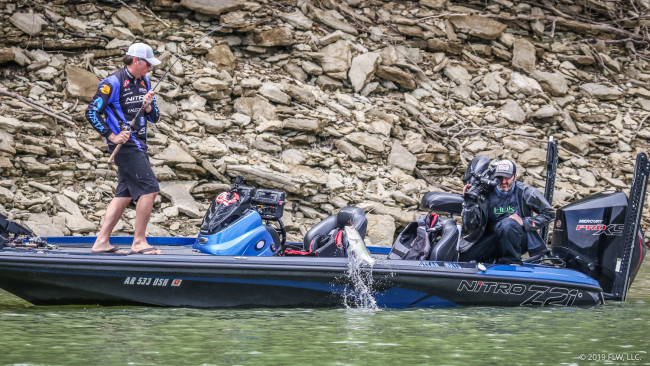 3. Hays goes off the beaten path in search of green fish

Unlike most of his competitors, Dylan Hays opted to forgo the smallmouth bite to run up the Holston River in search of big largemouths.

After spending a lot of time during practice trying to figure out Cherokee’s bronzebacks, Hays decided to go back to where he found some quality largemouths way up the river. Flipping a jig near laydowns and rock near channel swings, the three-year Tour pro put together a 65-12 four-day total and an impressive third-place finish.

“At 7 o’clock Tuesday night I ran up there, and I found those fish,” he said of practice after the day three weigh-in. “I got bit, like, every other flip. It was incredible. It was all little ones, and then I caught a 4 1/2-pounder, then I shook a big one off, and then five flips later I shook another big one off.”

From that point on, Hays knew he would win or lose chasing down those green fish. With so many 3-pound-class smallmouths in the main lake, he wanted to fish an area that held some bigger fish and a chance to secure his first FLW win.

Hays’ bait of choice at Cherokee was a homemade 1/2-ounce flipping jig with a Zoom Z Craw Jr. trailer the first three days and a Zoom Big Salty Chunk on day four. He also weighed in two fish on a Phancy Lures tandem-blade white and chartreuse spinnerbait with a white Zoom Split Tail trailer. 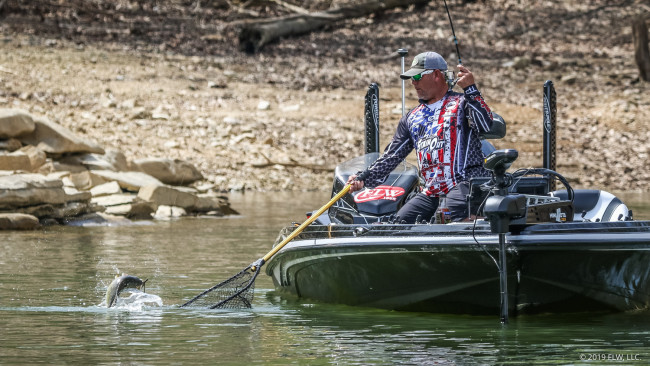 Jason Reyes got on the same pattern as most of the field and ran it to near perfection throughout the week. He mostly looked for big rocks inside small pockets where smallmouths were setting up to spawn or already on beds.

“I was just fishing bigger rock with a little spacing in between it,” he explains. “Spawning smallouths is what I was keying on. I was running main-lake stuff just inside the pockets, basically just picking every little crack apart I could. It was tedious work.”

Tedious, perhaps, but also very effective. He weighed in 65-11 for the week and 17-8 on Championship Sunday – the biggest bag of the day.

Jason Reyes mainly relied on a Z-Man Finesse ShroomZ Ned rig head with a green pumpkin Z-Man TRD to catch his fish. He rigged that on a G. Loomis 822 spinning rod and a Shimano Stella reel spooled with 6-pound-test Seaguar Tatsu fluorocarbon. He also tossed around a 3.3-inch Keitech Swing Impact FAT. 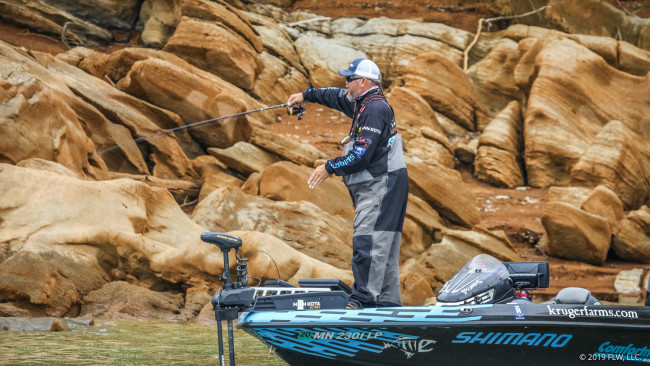 5. Young swings for the fences

After putting together a quality 17-plus-pound bag early in the day on Thursday, Andy Young decided to go big. He switched from traditional finesse techniques to a massive 7-inch swimbait to go after big fish instead of beating up on all the 3-pounders in his area.

It didn’t quite work out in his favor, but he did something similar on day four, switching again to a big swimbait to find a big bite. He landed a kicker that was good enough to keep him in the top five and buoy his 15-pound day-four total.

Other than that late Hail Mary, Young stuck to a similar pattern as the rest of the tournament field. The Isle, Minn., pro spent the week targeting bedding smallmouths on big rocks along the shores of mid-lake islands.

“I was basically running spawning smallmouths and targeting fish on table rock,” he explains. “If you can find isolated table rock with the big slits in it, they were spawning in there and in between boulders and rocks.”

Young used a 3/32-ounce Outkast Tackle Perfect Ned Head with a 2/0 hook most of the week. He tipped that with a Z-Man TRD, which he threw on a G. Loomis E6X 7-foot, 5-inch, medium-power, extra-fast-action rod and a 4000-size Shimano Stradic Ci4+ spinning reel spooled with 20-pound-test Sunline PEx8 braid and a 10-pound-test Sunline Shooter leader. Young caught his day-four kicker on a 4.2-inch Keitech Swing Impact FAT on an Outkast Tackle Golden Eye Swimmer head and also used a shaky head with a 4-inch Zoom Finesse Worm. 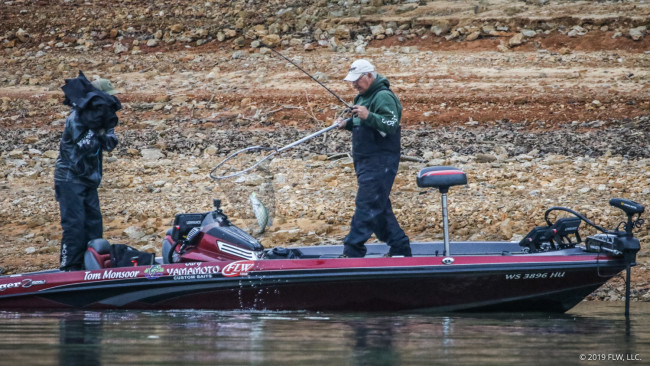 Sixteen-year Tour vet Tom Monsoor is the master of the “swimmin’ jig,” as he likes to call it, and he can call it whatever he wants considering how much money he’s made fishing with his own homemade jigs.

Cherokee was no exception, as Monsoor strayed from the pack and tossed around a swim jig all week. While other pros were dragging around finesse baits, Monsoor was power-fishing along just about anything that looked good to him.

“I fished a bunch of things in practice, but I settled on my swimmin’ jig because it was catching bigger fish – some real nice 4-pounders,” he says. “It just seemed to be working. I could run rocks, gravel, mud, anything and get a good bite.”

That bite dried up for Monsoor on day four. He thinks the fish in his area had already spawned out, and the 3-plus-pound kickers he found so many of the previous three days just weren’t around anymore to munch on his jig.

“For three days it worked,” he adds. “Today [Sunday] I caught 25 keepers, and there was one 3-pounder and the first fish I lost all week. I think they spawned and they’re done, at least where I was fishing.”

Monsoor’s homemade swim jig did all the heavy lifting at Cherokee. He opted for a white jig with a 3 1/2 -inch Yamamoto Swimming Senko (also white). 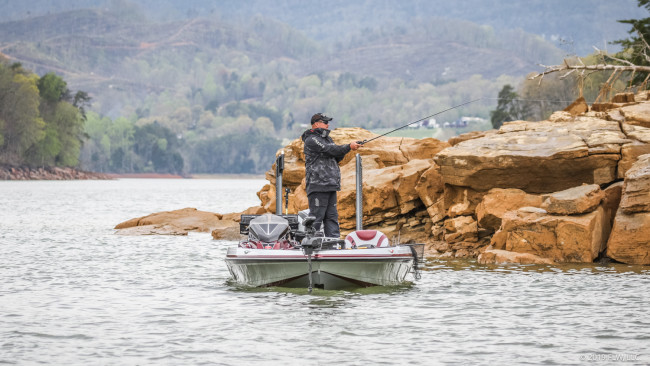 Tim Cales needed a big bite to give him a chance to win at Cherokee. He got one on day four, and while it wasn’t quite enough to earn the victory, he still put together a solid 62-8 four-day total.

Cales spent most of the tournament fishing like most others – tossing finesse baits at rock banks. On days two and four, though, he pulled out a big swimbait, which produced his biggest fish of the day on Sunday.

“For the most part, I stayed down around the dam,” he says. “Day two and today [Sunday] I spent six or seven hours in German Creek trying to catch a largemouth, and it never did work out. I caught a spot up there about 2 pounds, and I did catch about a 3 1/2-pound smallmouth.”

Cales used a Yamamoto Kut Tail Worm on a shaky head to target smallmouths and a Megabass Magdraft swimbait to go after largemouths. 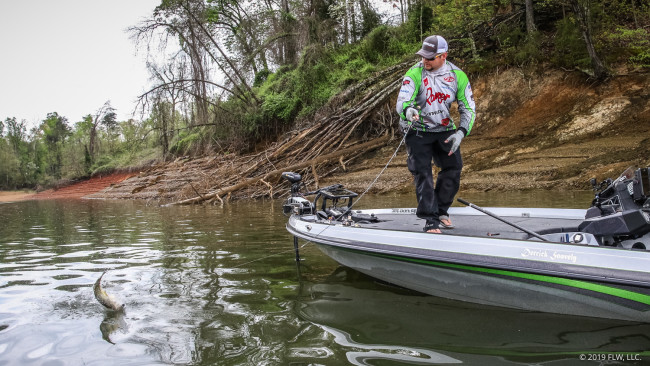 Derrick Snavely previously lived on Cherokee Lake for about 10 years, so he’s more than a little familiar with the fishery. While his experience wasn’t quite enough to guarantee a win, it was plenty to secure a top-10 finish.

Snavely spent most of his time throwing a shaky head and drop-shot in the mid-lake area in search of spawning smallmouths, but when he needed a kicker, he ran north looking for some largemouths.

“Really, all week probably 80 percent of my time was on spawning smallmouths,” he says. “[I fished] little transition areas and any kind of isolated rocks. I ran all the way up to the [25E] bridge today [Sunday] to try to catch a largemouth. I actually had a 5- to 6-pounder get off the first day up around the bridge. I let a 4-pounder get off there yesterday on the jig, and I went up there again today and didn’t catch any.”

Snavely utilized a V&M shaky head with a V&M Pork Pin worm (which he also used on his drop-shot setup) and a V&M J-Mag worm to get after his smallmouths. When he needed a big largemouth bite, Snavely used an Evergreen JT topwater and a 1/2-ounce V&M Cliff Pace The Adrenaline Pacemaker flipping jig. 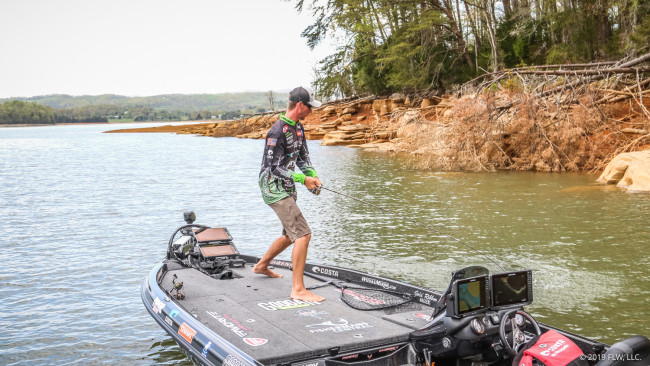 9. Becker keys in on channel swings

Matt Becker targeted transitions and rocky banks for his fish at Cherokee, but he made sure those banks were also close to the main channel that runs through the lake. If there was a channel swing close to shore, you can bet Becker found it and fished it.

“I was pretty much just running those bluffy banks with red clay-gravely stuff mixed in where it was broken up,” he says. “Anywhere where the river channel swung real close to an island or the shore is where I was focusing on, just because it seemed like that was where the bigger quality was.”

Becker predominantly stayed in the mid-lake area around most of the other anglers in the top 10. He didn’t spend any time targeting largemouths, but he says he did stumble into a couple throughout the week.

Becker used a BassCave Custom Tackle Dead Head for his Ned rig, which he tipped with a Z-Man TRD in green pumpkin, but his best tactic was tossing around a Perfection Lures Sure Hook-Up shaky head with a green pumpkin Googan Baits Slim Shake (with a bit cut off). 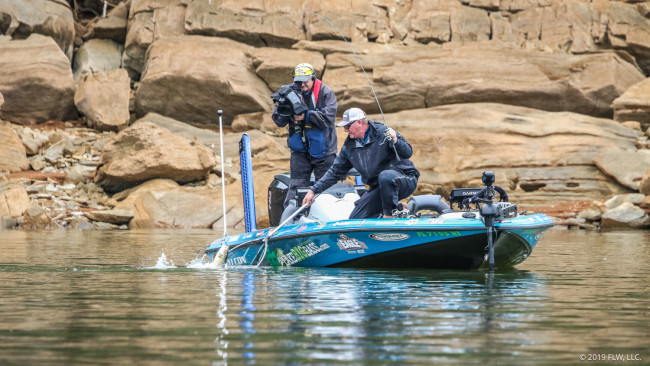 After three days of hammering on smallmouths in one of the most pressured areas of the lake, he didn’t run across the quality fish he needed on day four. Frederick ran multiple islands within a one-mile area mid-lake, often leaving and then returning to the same spot after 20 or 30 minutes to let new fish move up.

On Championship Sunday, after a short period of rain, the sun came out and completely turned off Frederick’s bite.

“Basically, what happened was I ran out of fish,” he says. “I stayed there every day all four days. I might have left for 20 or 30 minutes at a time, but I always came right back.

“I just think I ran out of fish, and once the sun came out today [Sunday] something happened and they just didn’t bite.”

Frederick used a Z-Man Finesse ShroomZ Ned rig head with four different colors of the Z-Man TRD and Z-Man TRD MinnowZ to do most of his damage. He also mixed in a stand-up head tipped with a Strike King Rodent.