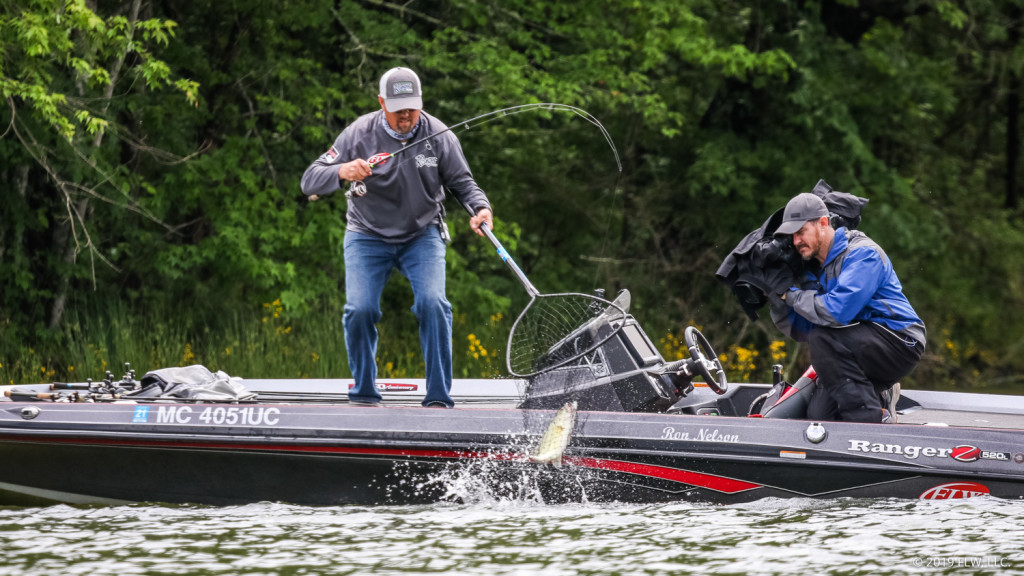 The end of the competition is near, and things are still wide open at the top of the leaderboard. Greenblatt leads, but Cox, Gross, Dudley, Nelson and Davis are all one fish away from taking it away from him. Things can change fast on Chick, and whatever happens, we’re crowning a champion at 4 p.m. ET at the Dayton Boat Dock. Watch it all go down live on flwfishing.com! 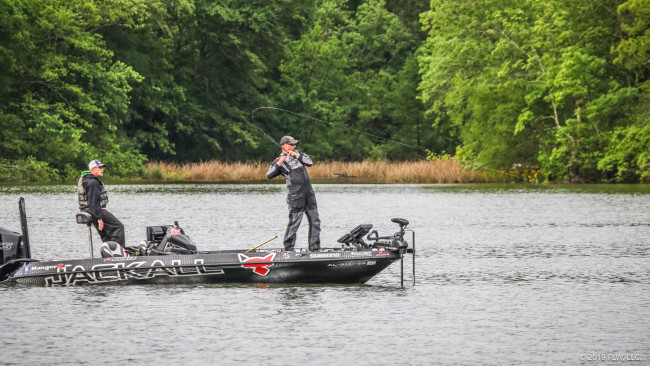 Alex Davis is hitting his stride out on the ledges. The Alabama pro just went back-to-back on 4-pounders and is now up to 16 pounds. With those two fish, there’s no reason to believe he can’t duplicate his 23-pound bag from yesterday and win the whole deal.

Ron Nelson is poled down on a bedded fish. We’re not sure if it’s the 9-pounder, but it’s got to be a good one because he’s giving it a lot of attention.

Things slowed down for Buddy Gross, and now he’s about to make his milk run back toward weigh-in. “I’m going to win or lose upriver," he said. "That’s where I caught all the big ones.” He’s on his way to Possum Creek now.

Ron Nelson made a move back up shallow. He’s mostly using moving baits to find the fish, then trying to catch them with a soft plastic. He's about to check on a 9-pounder on bed nearby. That would sure make things interesting if he caught it.

Greenblatt is catching a few fish, but they’re all dinks. It seems like his juice is running dry.

Matt Greenblatt has had at least one big fish to anchor his bag each day of the tournament. He’s yet to find that big girl today, but it could happen at any minute. Buddy Gross is catching some fish out on the ledges. His last one was good enough to make a small cull. Ron Nelson is also out there running through a few spots. Lastly, John Cox and David Dudley are still grinding near the bank with not much to show.

The final hour and a half of FLW Live is underway. Once that finishes up, we'll put the blog and leaderboard to bed, so be sure to watch and see what happens. 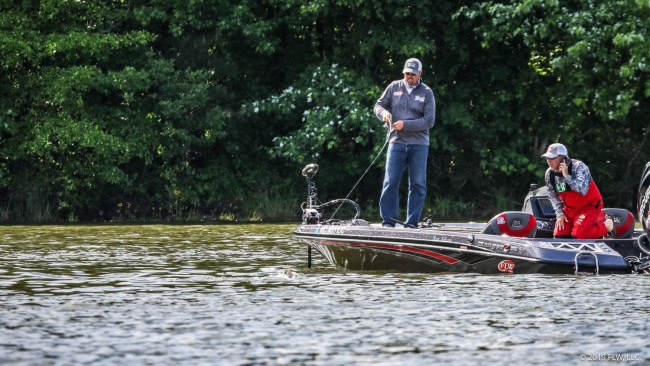 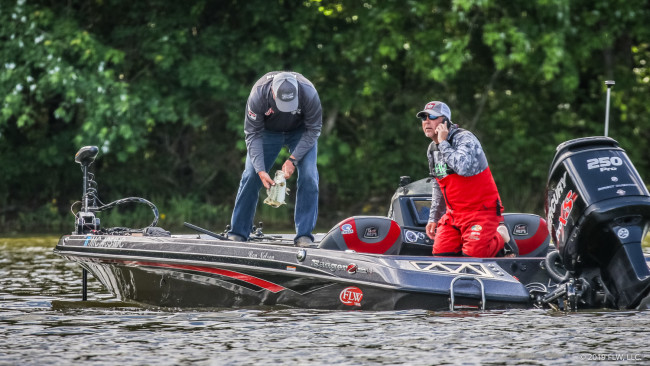 He slipped just a little bit yesterday, but Jared McMillan is on them good today. He has a couple fish in his livewell that'll each weigh more than 4 pounds, and his limit is worth around 18. A few more kickers and J-Mac could rise toward the top of the leaderboard.

Ron Nelson is the only pro in the top 10 who doesn’t have a limit. He just caught a few keepers, but none of them are that big. His late-day heroics from yesterday proved that you really can't ever count someone out on a lake that has 10-pounders swimming around. Any cast can be the one that gets the rookie paid $125,000. 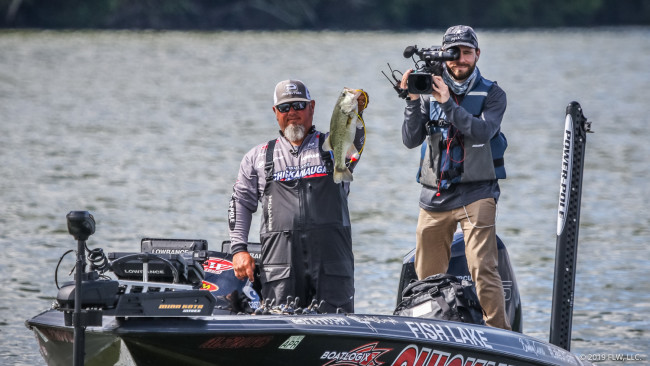 Buddy Gross is capitalizing on hitting a few community holes now that there is less pressure on the lake. He’s mixing in a bunch of ledge baits. In a matter of minutes Buddy put fish Nos. 4 and 5 in the box and made a cull. Unofficially, we have his total weight estimate at 14 pounds, but they could easily tally up to more than that. 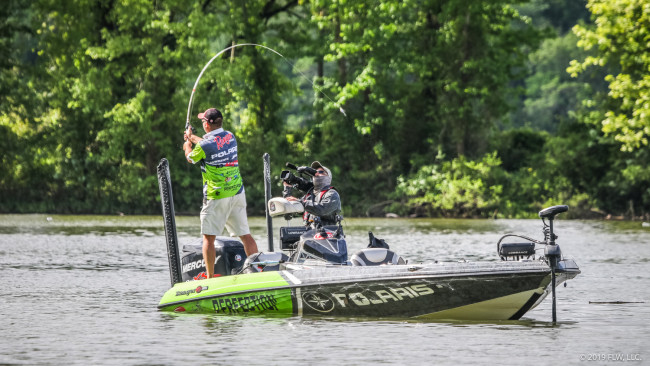 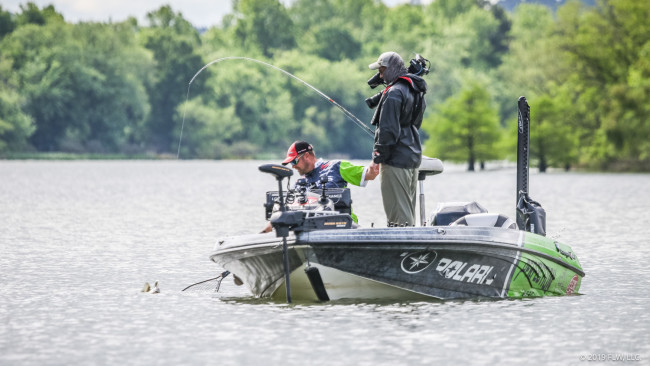 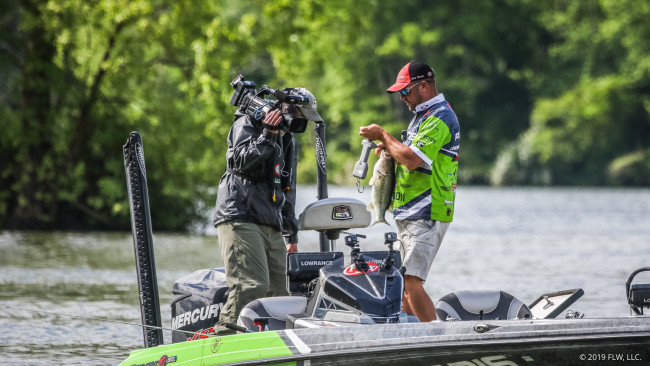 David Dudley has a wolf pack of fish fired up right now. He’s literally calling his shots and catching a fish every cast. The last one he caught was nearly a 4-pounder. Be sure to jump on our YouTube FLW Live chat ASAP because Dudley is giving away crankbaits to those who guess the weight of the fish he’s catching. 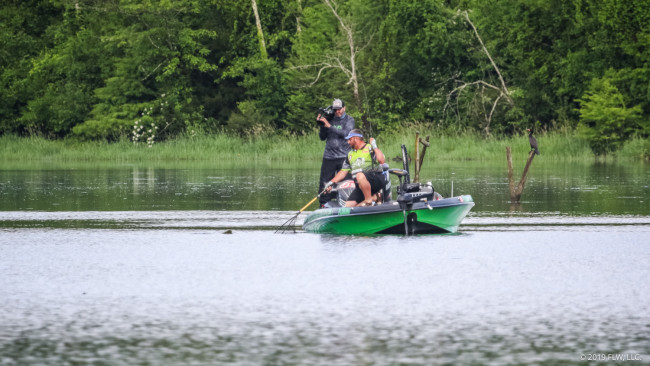 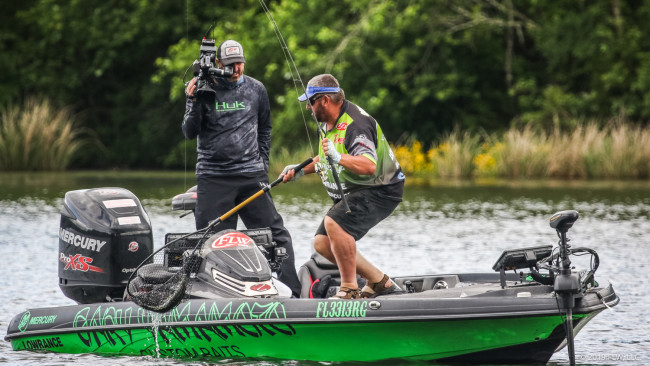 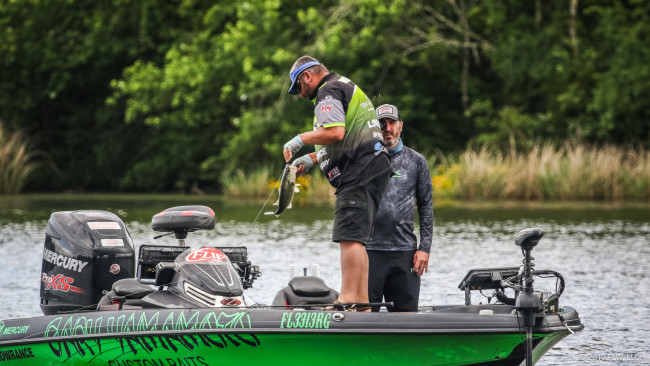 Matt Greenblatt got fish No. 5 in the boat on the wacky rig. He wishes there was a faster way to catch the fish, but he is grateful for the his Yamamoto Senkos. Greenblatt put his fish on the scales and they went for 14 pounds total.

John Cox found a bigger fish near some cypress trees and was able to cull up some. Cox has been low on his fish estimations all week. Assuming he’s down a little on today’s fish, we may have a virtual tie between him and Greenblatt for the lead. 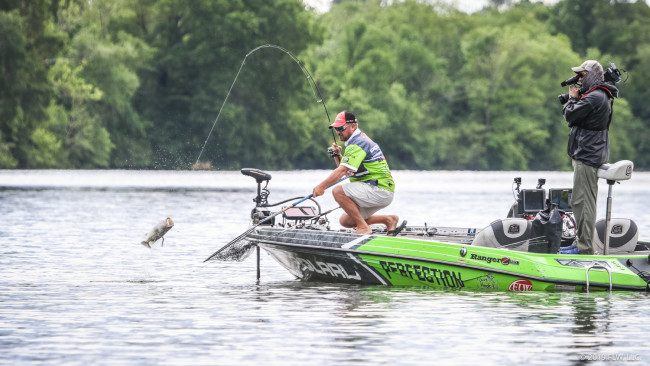 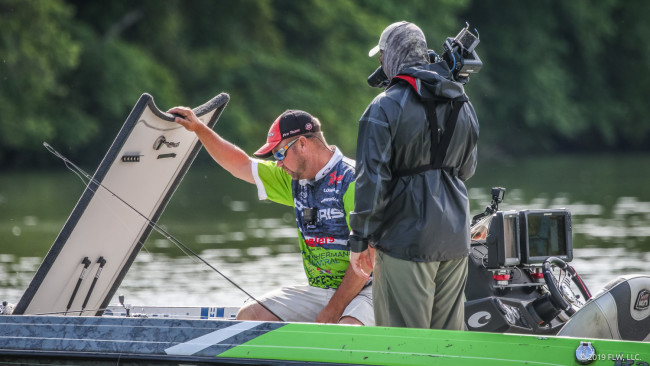 David Dudley had a super slow morning but finally got his fish turned on. He struck out on the shad spawn, but has been crushing them lately on the spinning rod with a wacky rig. “Think about it," Dudley said of his reasons for throwing a worm. "If you had to eat a shad every day of your life, it would get old.” His limit is up around 12 pounds now and should keep going up in a hurry. 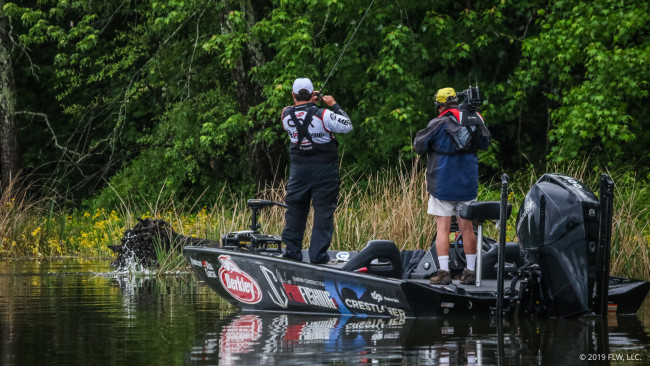 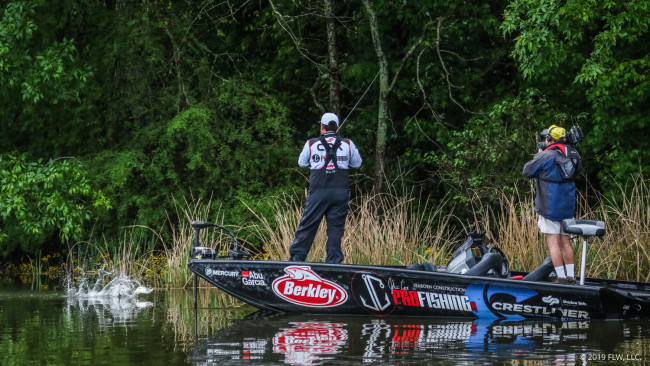 John Cox was able to hook up with a better fish off of a bluegill bed and now holds the unofficial lead. His marshal reported the fish to be around 4 pounds. It ate his Berkley MaxScent General. Cox thinks there is a whole new batch of fish making their way into his area.

Buddy Gross made a move toward shore to get on a little bit of a shad spawn, but hasn’t caught any. Buddy is a little frustrated to say the least. 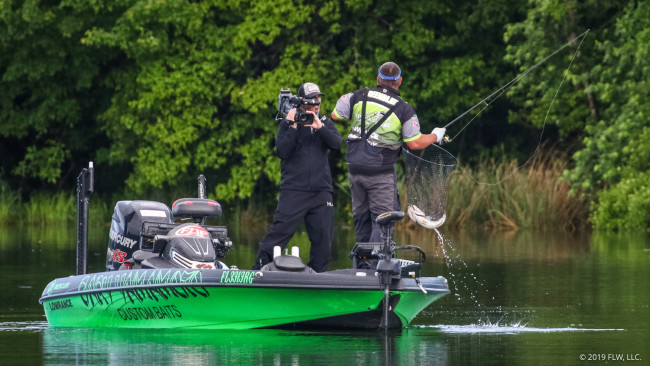 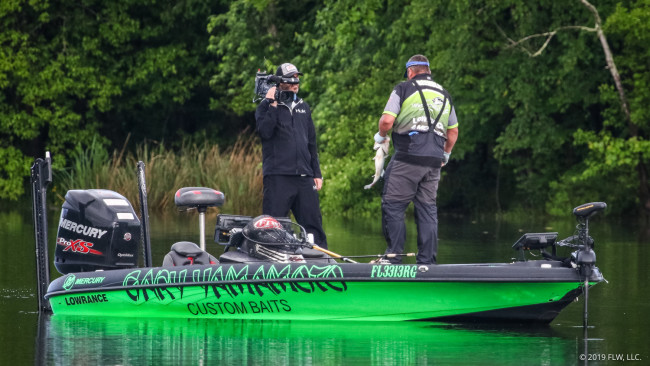 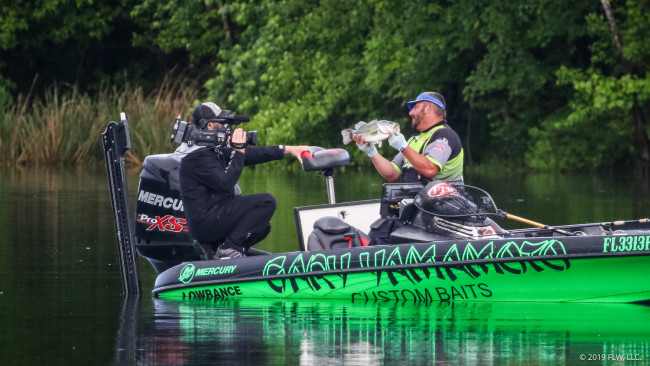 Right when you think Matt Greenblatt is running low on fish, he finds a way to connect with another. Just a minute ago Greenblatt caught his third fish – a 4 1/2-pounder. A few Tennessee pros mentioned that the creek he's fishing is one of the best on the lake, and Matt is sure milking it for all it’s worth.

Jared McMillan just bumped into a solid 4 1/2-pounder while flipping. David Williams is grinding away on the 2-pounders this morning for a little over 8 pounds. Other than those two, the last half hour has been slow.

Winning the tournament is obviously the first priority, but a few of the top 10 have to start thinking about the AOY race too. David Dudley, John Cox and Buddy Gross are one, two and three atop the AOY standings, but their exact place could fluctuate depending on where they finish today. Gaining a point or two could go a real long way when it all shakes out at the final FLW Tour event on Lake Champlain in June. 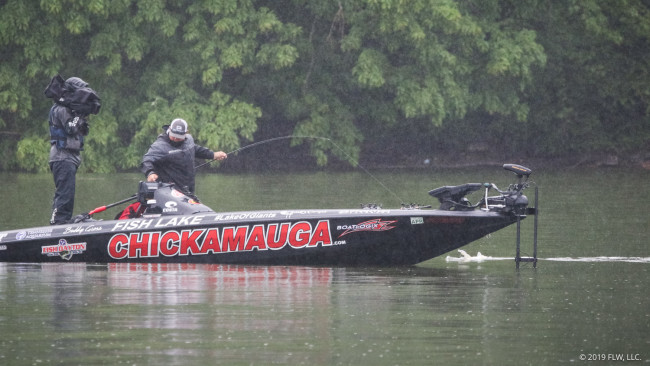 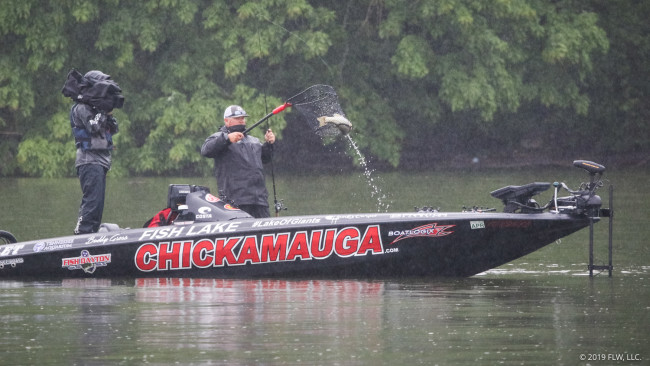 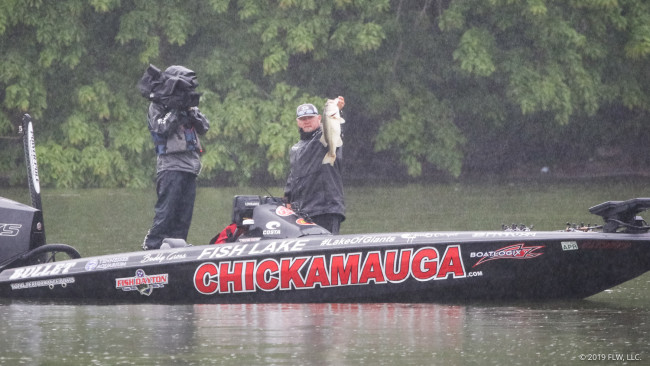 John Cox scraped up what he says is the smallest Chickamauga limit he has ever had. Having a limit it nice, but he might as well have zero because he will need to cull out every single one to have a shot at winning.

Matt Greenblatt bagged his second keeper – a 2-pounder. His fish seem to be reloading pretty well in the area despite four straight days of pressure. Buddy Gross also caught a few more keepers since our last update. His fish are coming off the ledges with his big crankbait. He told us his weight estimates, but we think Buddy is sandbagging a little bit. 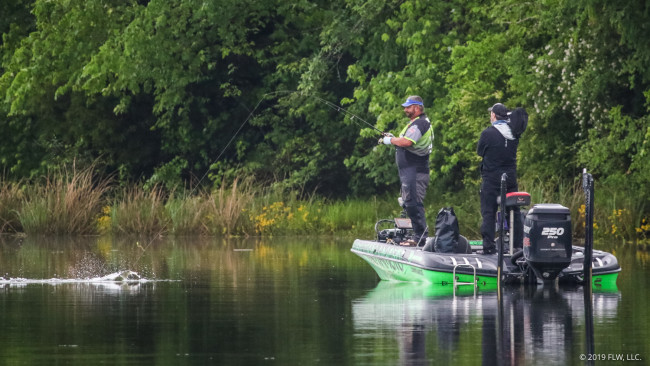 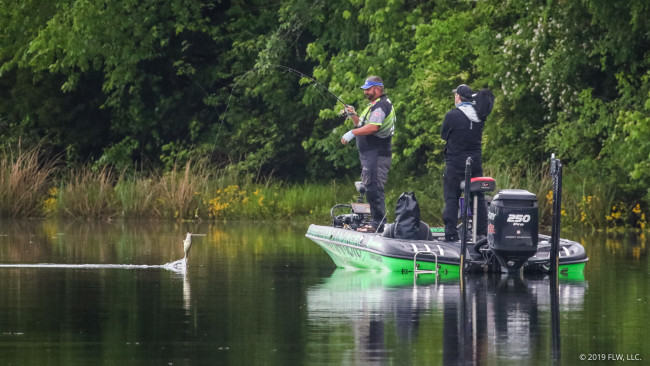 Yesterday, the morning bite was furious thanks to a strong shad spawn. This morning, almost an hour into the day, only two keepers have been caught. Granted, some of that time was spent running to pros' starting areas. But it still appars to be significantly tougher. Matt Greenblatt has a 2 1/2-pounder, while Buddy Gross, who has a few spectators following him today, has a 2-pounder. 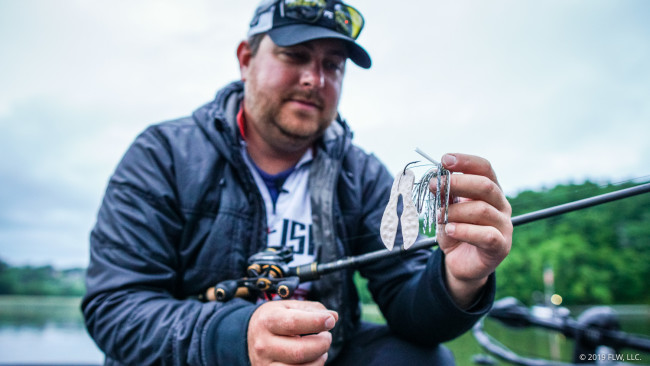 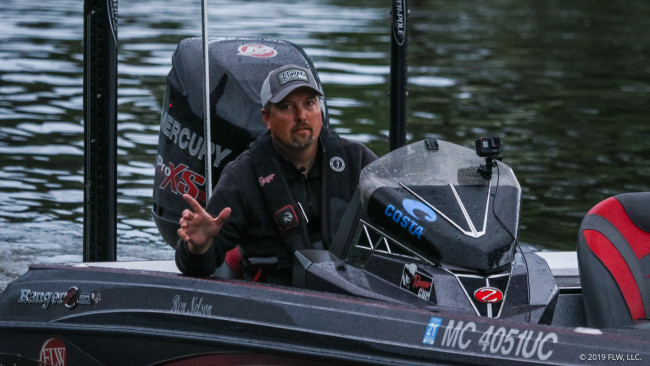 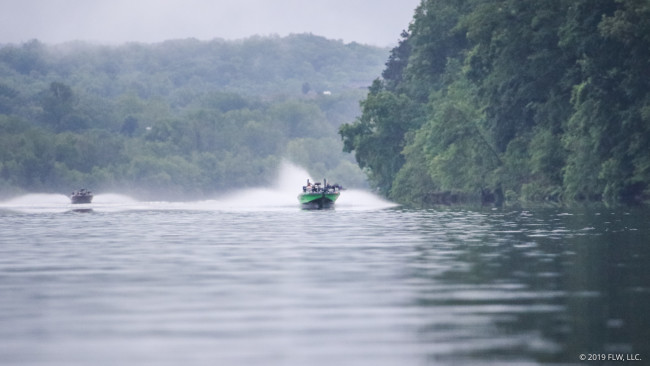 About 9 pounds separate the top 10 at Lake Chickamauga going into the final day. That's one kicker on this trophy destination.

Hoping to be the one to bring in the kicker and his first win are Ron Nelson, the current leader, and Matt Greenblatt, who trails Nelson by just 14 ounces. Behind them are FLW stars John Cox, Buddy Gross and David Dudley. The talent doesn't drop off one iota after that. This is a packed top 10, in terms of fishing ability and weights, and they're all hoping to catch the Michigan rookie whose late-day heroics led to three big bites and the three-day lead.

It was raining at takeoff this morning, and a bank of clouds darkened skies over east Tennessee. Those conditions aren't ideal for sight-fishing, but as we saw yesterday, there are plenty of ways to catch bass on Chickamauga that don't require looking at them. It's still anyone's game with any tactics, from bed-fishing to fishing ledges. What will work on the final day at Chick? Stick around to find out. FLW Live with Travis Moran and Peter T starts at 8 a.m. ET. The blog will run throughout the day, as will the FLW Live Leaderboard.

John Cox picked up breakfast from Bojangles this morning. Catching a Chickamauga giant would be a legit way to start the morning, but you really can’t beat Bojangles’ Famous Chicken ‘n Biscuits.

Tournament leader Ron Nelson has never eaten shrimp. Being from Michigan, he rarely gets fresh seafood, which is why he never gave shrimp a chance.