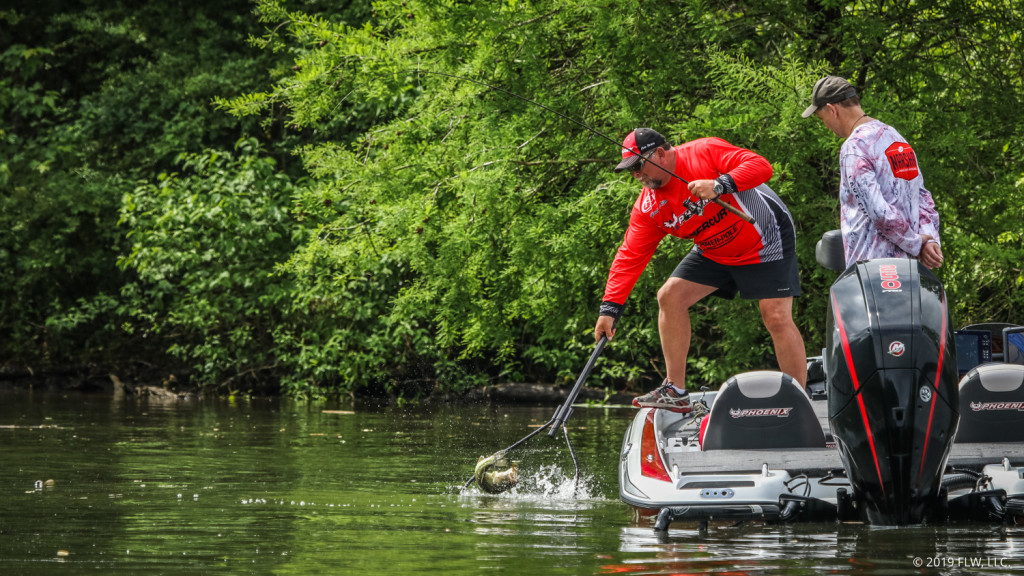 John Young of Canal Winchester, Ohio, walked away from his first-ever visit to Lake Chickamauga with $2,500. Perhaps more importantly, he left with a story he and his day-two angler, J Todd Tucker, will never forget.

The winner of the FLW Marshal contest compiled a total weight of 38 pounds, 5 ounces (between Tucker and day-one angler Randy Allen) to win the top prize. Allen did the heavy lifting on that account (22-14 on day one), but Tucker finished the job with a bag of 15-7 that he may never have weighed in if it weren’t for Young.

“You saved my life,” Tucker said to Young after weigh-in on day two.

He wasn’t being flippant, either.

As Tucker tells it, the second-year Tour pro was fishing around an old duck blind when he hooked a giant. It wrapped itself around the blind, and Tucker did everything he could to get it free.

At that point, Tucker fell face-first into the support post, impacting it with his nose.

“It happened so fast,” he adds. “I didn’t know what happened. I’m blacked out. It knocked me out. I woke up and he [Young] is right there holding my arm. Thank goodness.”

Young saw what happened and immediately scrambled to grab Tucker and help him from the water.

“He went in, and I went to help,” Young says. “He rolled over, and his eyes were up and blood was everywhere.”

With Young’s assistance, Tucker made it back into his boat and finished the day. He was sore and still a little bloodied-up after weigh-in on day two (Tucker finished 60th and earned a check), but otherwise fine – if not still a little shaken from the experience.

Young was just happy to be in a position to help, and Tucker is surely happy his marshal was there to lend a hand.

Young, a retired UPS employee, is a self-proclaimed “geek” when it comes to bass fishing, especially of the professional variety. So when the Ohio native saw Lake Chickamauga on the schedule and had an opportunity to sign up as a marshal for the first time, he knew he had to take it.

Now, he’s hooked on Chick and excited to potentially marshal again in the future.

Young saw what Chickamauga is capable of, particularly on day one with Allen, who landed a giant 8-pound-class fish as his marshal sat there with a front-row seat. 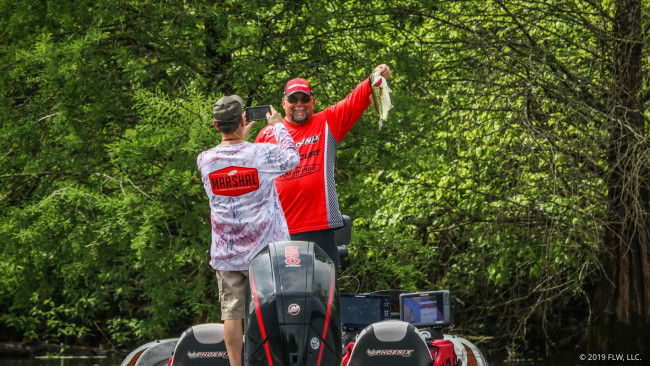 “When he [Allen] had that big one on there, I’m sitting there with goosebumps,” he explains. “Neither one of us could breathe after that.

“I told Randy after that that this is my first-ever tournament [as a marshal]. ‘You ruined marshaling for me, because after today, I doubt if it gets any better. I might as well just sleep in.’”

Young was joking, of course, and it’s certainly a bit of serendipity that he didn’t sleep in. And while Allen may have had the best day Young is likely to ever see as a marshal, he wants to do it all again.

All in all, it’s safe to say Young’s first experience at Chickamauga and as an FLW Tour marshal was a success. Just ask J Todd Tucker.

Thank you to all who participated at Lake Chickamauga. If you’d like to learn more about becoming a marshal, please call 270.252.1000, or visit flwfishing.com/marshals. Openings are available for the upcoming event at Lake Champlain.