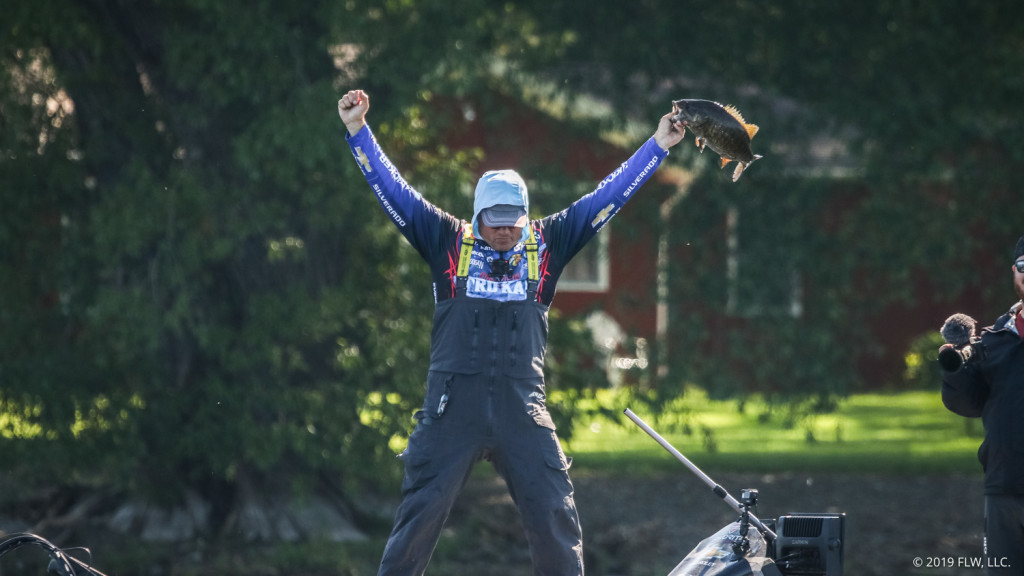 The fish-catch updates have slowed down slightly, but that’s likely because anglers have their limits and are just looking for larger fish to cull with. Daryl Biron, Matt Wittekiend, John Voyles and Evan Barnes are among those who have all culled up enough to find themselves in the top 10. Only a few pounds separates first from tenth, and these weights are all estimates, so we’re due for some shake-ups once the fish actually cross the stage. We will keep the leaderboard open for another half hour or so, but be sure to check flwfishing.com at 2:30 p.m. ET to watch us weigh them in live.

We just learned that David Dudley has a limit worth about 16 pounds. Unofficially, that would have him in the AOY driver’s seat. John Cox appears to have plateaued with the smallmouths and is now chasing green fish. Joseph Webster is also up over the 16-pound mark now, and could realistically be in the mix for taking the AOY lead before the day is over.

Brian Latimer found a kicker largemouth down in Ti that looks to be pushing 5 pounds. He’s over 15 pounds and could use one more nice kicker to position himself better for tomorrow and maybe the weekend.

Those who made the long run to Ti will need to keep in mind that they have a long run back north to Plattsburgh. In fact, the wind may have picked up slightly since this morning. Some pros are going to be in for a wet ride back, at the very least. 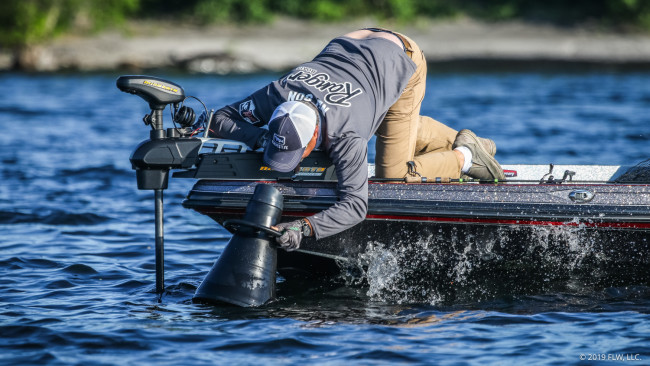 If you’ve seen the FLW Live Leaderboard, you may have noticed a lot of the pros are working their way up the leaderboard one cull at a time. Two- and 3-pounders are plentiful in Champlain, but finding the larger ones is the ticket. So far, it seems you have to have quality fish marked on beds from practice or you just need to grind away in hopes of rolling on the better ones.

The unofficial leader, Rob Kilby, is still the only angler we have marked at over 20 pounds. Those pros who have 18 or more may not even really be trying to upgrade anymore today. A lot of their efforts could be set on making sure they have enough fish to last at least another day.

Jimmy Houston is playing from behind today. He didn’t have a chance to practice this week due to “sponsorship obligations,” per his marshal, Nathan Mapes. Houston has just one green fish that goes about 2 ½ pounds in the box after spending much of the morning searching around.

Near the top of the leaderboard, Hensley Powell has made several culls to top 18 pounds. Clayton Batts (17-8) is making moves as well, though Ron Nelson is still searching. He’s in fine shape as is, but he could use one nice kicker to better position himself for tomorrow. 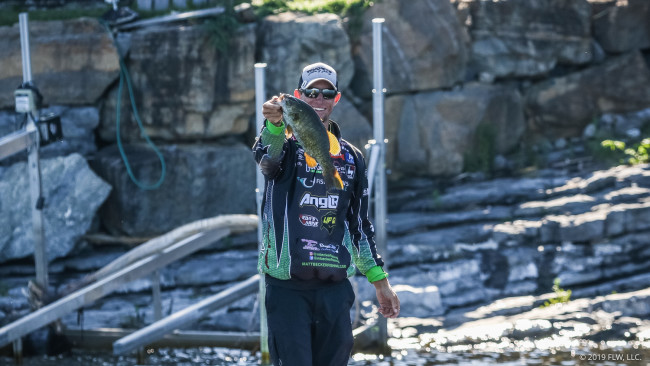 The largemouth bite seems to be picking up all across the lake as the day goes on. Bryan Schmitt is doing work up shallow on some green fish – most recently catching a 3 1/2-pounder. Eric Jackson, Zell Rowland and Chad Grigsby all have limits of largemouth. Jackson’s biggest is a 4-pounder.

We’ve mentioned the AOY race a lot, but the The Polaris Rookie of the Year race is heating up as well. Miles Burghoff had the lead at the start of the day, but if things were to end right now, Ron Nelson would be winning. Between AOY and ROY, we might be in store for some down-to-the-wire finishes.

AJ Slegona, Austin Felix and Matt Becker are all unofficially over 18 pounds with Nelson and Matt Wittikiend closing in on that mark. We could see a handful of bags over 20 pounds when it’s all said and done today if some 4-plus-pounders find the right hooks. 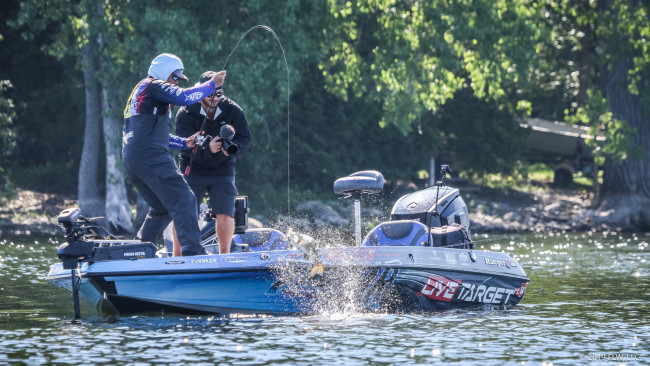 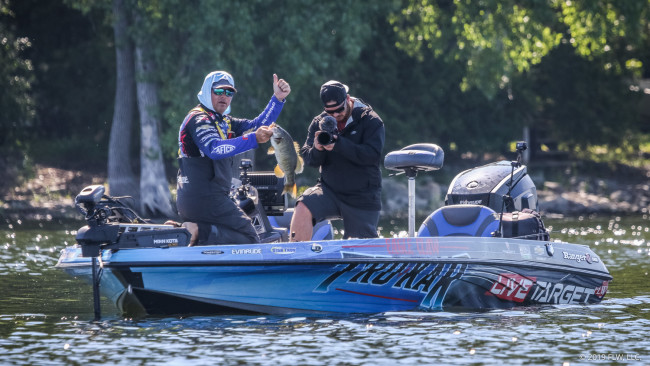 There’s absolutely no sign of the bite slowing down on Champlain. The unofficial tournament leader, Rob Kilby, just made a cull and is flirting with the 20-pound mark. He may be over it now.

Matt Becker, AJ Slegona, Clayton Batts and Scott Martin are also catching quality smallmouths. Even the pros who ran down to Ti are getting things going on the largies. Joseph Webster, Daryl Biron and David Wooton have all been culling fish recently.

We haven't heard of any really big fish caught yet, though Matt Wittikiend’s marshal did just report a 5-pounder. Tommy Dickerson also has a 4.5. They’re few and far between, but 5-pounders go a long way on Champlain. Now that a lot of pros have strong limits of smallmouths, we could see them go head-hunting on kicker green fish.

Champlain is home to many more species of fish than just bass. In practice, the pros were catching everything from lake trout to walleyes. Most recently, Andrew Upshaw bumped into a big, greasy pike. 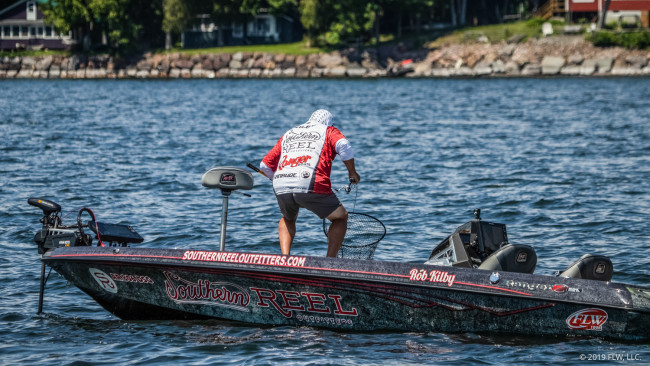 Rob Kilby just took over the unofficial lead after culling out a 2-pounder for a 4-pounder. Like the others near the top, Rob is catching bronzebacks.

The top of the leaderboard has remained fairly constant so far, but we haven’t heard from about half the field at this point. What we do know, though, is that anglers are catching them. It’s a good bet there are some pros with decent bags who haven’t reported yet.

One name to keep a close eye on today is Austin Felix. The northern smallie hammer has about 17.5 pounds and it sounds like he had close to 20 pounds of fish marked to start the day. If he can find an upgrade or two, he’ll be right where he needs to be entering day two.

The latest report on John Cox indicates that he has 15 pounds or so. With nothing coming in on Dudley yet, Cox is in pretty good shape to maintain his AOY lead, but anything can happen still. 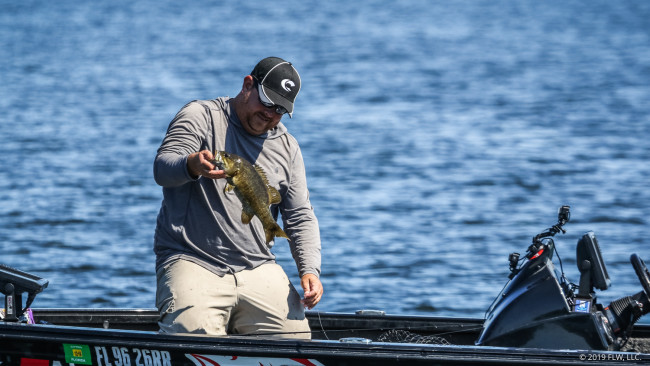 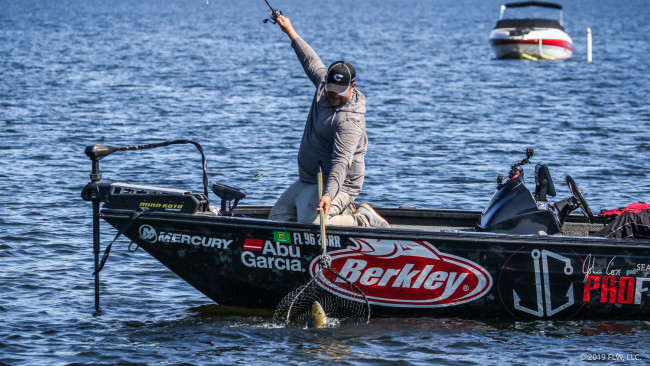 Fishing has been about all you could ask for so far on Champlain. Just about everyone seems to be around fish. It seems like the FLW Live Leaderboard fish catches are comprised of about 90 percent smallmouth – a lot of which are coming off beds. It will be interesting to see if this pattern can hold up through Sunday. Matt Becker says he is already running beds that he was going to save for tomorrow.

John Cox has a limit in his boat now. His fish are all of the brown variety and go for about 13 pounds. Still no word of Dudley finding any fish. Joseph Webster, who entered the tournament 4th in AOY points has a limit for about 12 pounds. At the very least, he’s keeping pressure on the leaders.

Joel Willert has about 18.5 pounds in the box and is “done for the day,” according to FLW media staff. If he manages to upgrade even a little bit, he’s going to be in great shape come weigh-in. 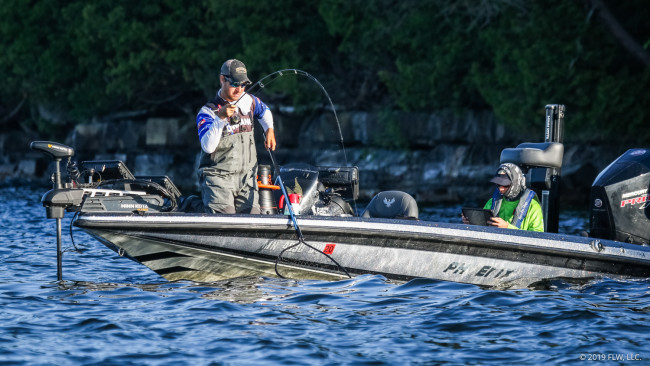 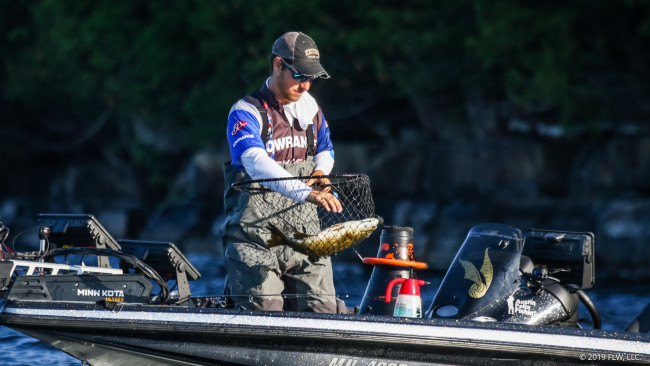 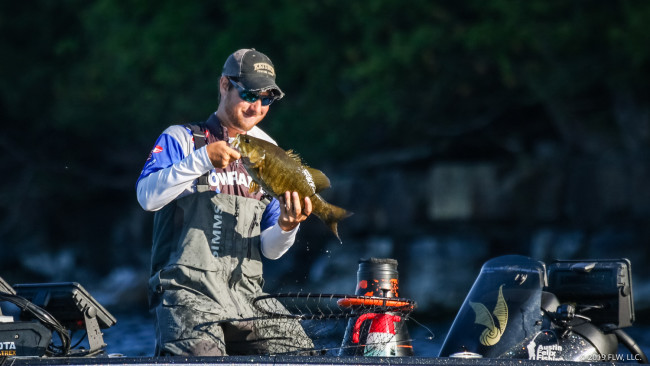 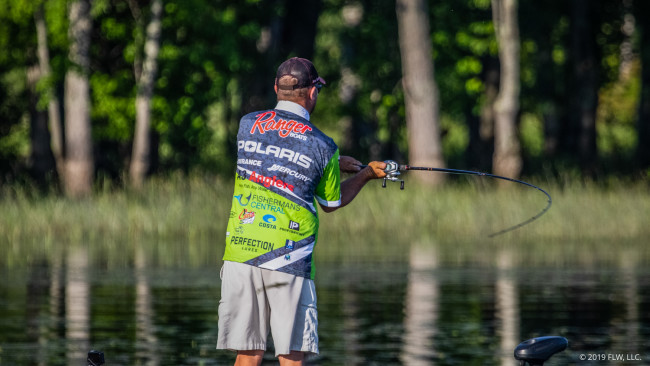 Austin Felix and Ron Nelson just completed their limits and are now pretty much tied with Joel Willert, unofficially.  We did confirm that all three of them are all catching bedding smallmouth thus far. Depending on how many beds they have marked, we could see them change tactics here soon to save some of their waypoints.

David Dudley made it to his first spot only to find out his fish are acting a lot differently than they did in practice. He thinks he made the wrong choice to start there. “Not even a 12-incher. That’s, like, horrible.” The good news for Dudley is that John Cox isn’t exactly smacking them either, or at least we haven’t gotten much in the way of fish-catch updates yet.

We counted about 20 anglers show up to Ticonderoga. However, not a whole lot of fish catching is going on yet for those who made the long run. The only report we have from down there is Joseph Webster’s 12-pound limit. Currently, we’re watching B. Lat work a line of reeds with a bunch of baits, but he’s coming up empty-handed. 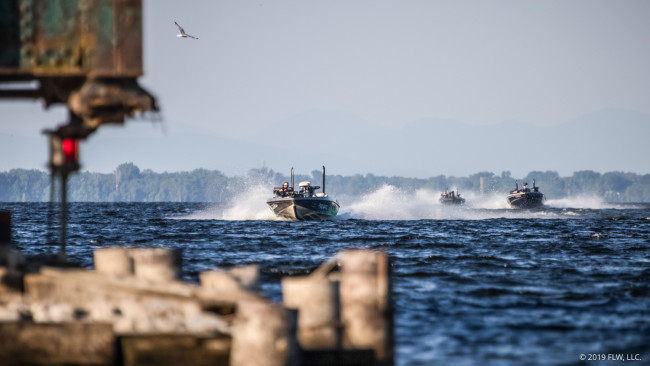 Minensota rookie Joel Willert is leading the pack with nearly 18 pounds so far. As expected, he's one of the crew targeting bedding smallies. Ron Nelson and Austin Felix both have some nice fish in the boat, too. Their fish came off of beds they had marked from practice. Troy Morrow also has a quad of brown fish in the livewell.

Chad Grigsby, Christopher Brasher, Tyler Stewart, Chad Warren, Bradley Hallman and Joseph Webster are the pros we for sure know are making the long run south to Ticonderoga. None of them have reported anything yet. With the waves at this morning’s takeoff it wouldn't be surprising if the run is taking a little longer than planned. 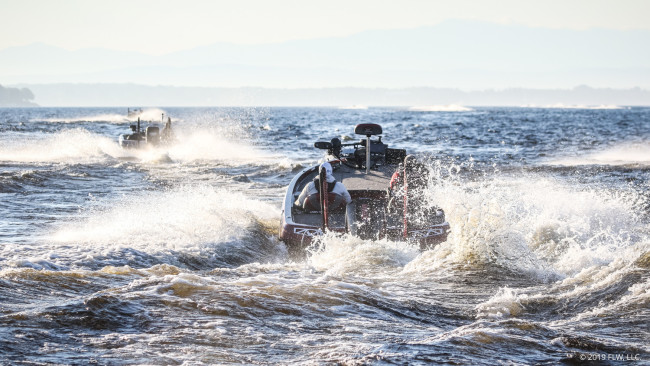 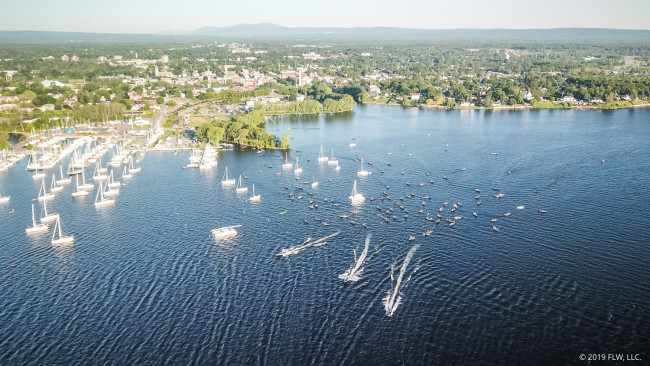 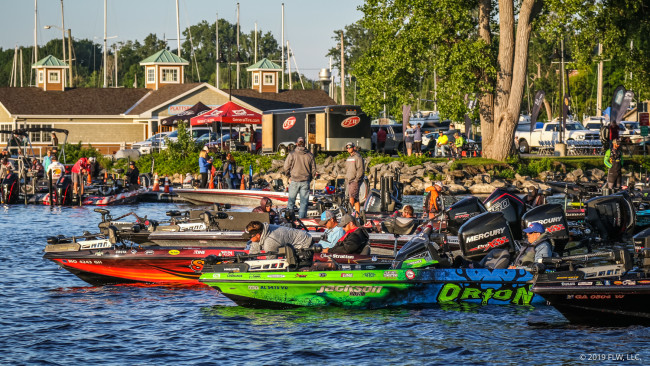 John Cox and David Dudley launch this morning with just one point separating them in the Angler of the Year race. Behind them, Buddy Gross, Joseph Webster and Scott Martin remain just within striking distance. Given how well Cox, Dudley and Martin, in particular, always fish on Champlain, there's a very real chance of fireworks this week.

Champlain is a special fishery that never fails to produce. Given the species breakdown and the time of year, the winner could end up weighing entirely green or brown fish, or the time-honored mixture that is so successful on Champlain.

The usual suspects (many of whom we already mentioned) will be anglers to watch this week, including Bryan Thrift, but rookie Ron Nelson may have the best shot of anyone in the field at spoiling Cox's, Dudley's and Martin's chances of notching a win to close out the season. Not only does Nelson have an outside chance of winning Rookie of the Year, but he also has two wins on Champlain in the Costa FLW Series under his belt.

The forecast is looking downright gorgeous right now, with projected highs in the mid-80s and plenty of sunshine. As long as the wind decides to play nice today, the conditions are going to be favorable for an exciting day of fishing.