Stewart Stays Ahead at Champlain

Louisiana pro keeps the hammer down at Ti 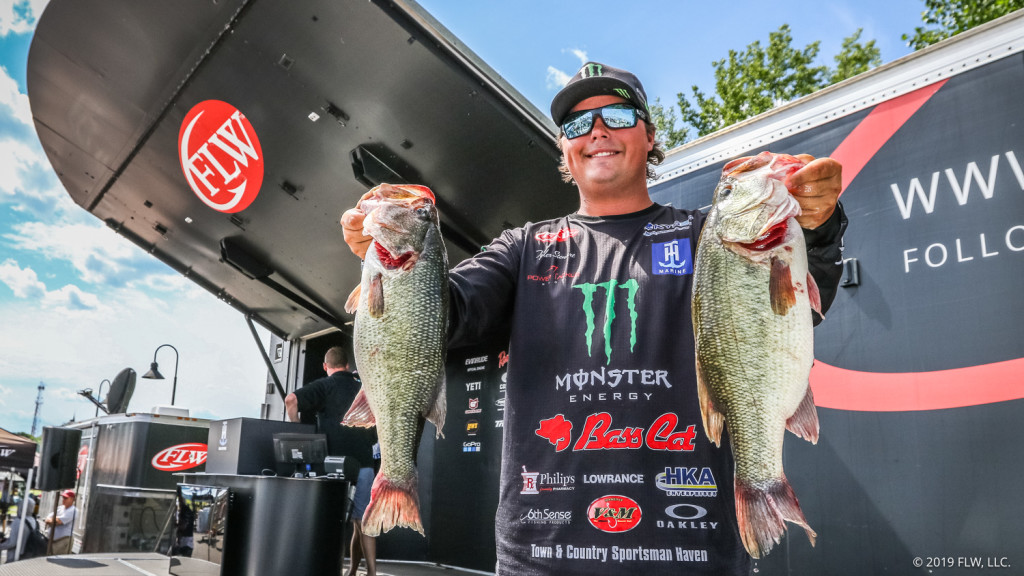 Tyler Stewart’s day-one limit of more than 22 pounds set the bar sky high on Lake Champlain for this week’s FLW Tour event, which is presented by T-H Marine. That’s not an easy mark to match, and today Stewart’s performance was a little more on par with the rest of his competition. He hauled in five largemouths that totaled 17 pounds, 14 ounces.

Stewart is still in the lead going into the top-30 round, but John Voyles, who’s fishing for smallmouths, is only 1 pound, 5 ounce behind him.

For two days, Stewart has made the long run down to Champlain’s famed southern waters near Ticonderoga to target plump largemouths that are in the midst of a postspawn feeding binge. The difference in yesterday and today was that Stewart weighed in one less 4-pound-class largemouth and didn’t have time to try and pick off a bonus smallmouth like he did on Thursday. He also had a bit more company in his area.

He had to resort to fishing some of the “juice” he was saving for later in the tournament.

“It started off good this morning. I pulled up at the first place I stopped and caught one close to 4 pounds,” he recalls. “I jumped around a little bit and caught a few fish here and there, some 2 3/4s, then ended up catching a 4 1/2 around 10 o’clock. I had probably 16 pounds at that point. I culled a few more times by ounces. Then right at the end of the day I caught another one about 4 pounds.” 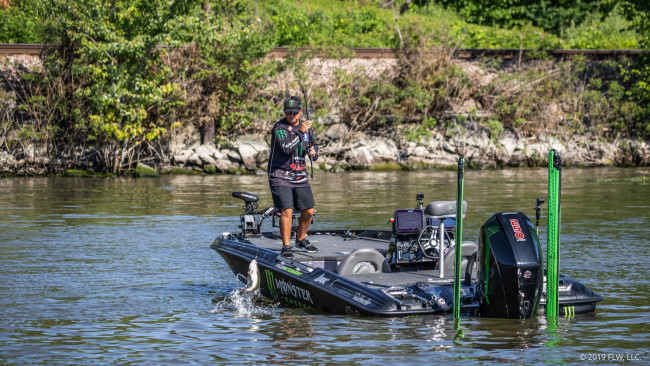 Stewart is catching his fish flipping plastics around a few different cover types. He has a couple of key areas, but is also running and gunning a little bit and fishing whatever fits his pattern. He ran new water today, but also spent part of the day playing defense on his best stretches.

Looking ahead to the weekend, clouds and rain are in the forecast, which bodes well for the largemouth specialists and not so great for anyone trying to spy smallmouths on beds.

“They bit really, really good in practice down there in the rain,” adds Stewart. “The only problem is if the wind picks up, getting down there and back is the only issue. I think they’ll bite down there if it’s raining.

“I think they will [hold up] as long as I don’t have a bunch of company. If I have all my stuff to myself I feel like I could potentially catch a couple good bags.” 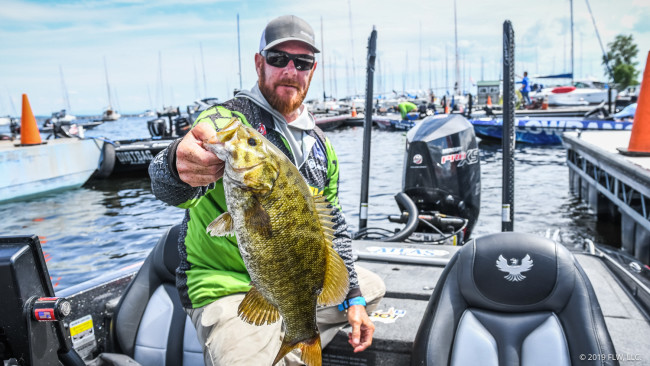 There’s a pretty magical spot on Lake Champlain that’s produced every smallmouth bass that John Voyles has weighed in so far this week (he weighed just one largemouth yesterday). Today, Voyles learned that another pro caught 19-plus from that spot on day one, but the Indiana pro got there first this morning and was able to sack up 18 pounds, 5 ounces to go with more than 20 on the first day. Assuming he gets full access to the spot tomorrow, he’s hoping to keep the heat on Stewart and the rest of the pros running to Ti to target largemouths.

“I was on the juice, and I was fortunate to get five good bites,” Voyles says. “Actually, I did lose another big one. It was probably 4, 4 1/2. It came up and ate my spook. I got it to the boat, and there was a 2-pounder with it. It knocked the spook out of his mouth, trying to eat it out of his mouth.”

Voyles says there’s a mix of spawning smallmouths and postspawn fish in his area, and new ones are still moving in.

“I’ll probably live or die on that spot because I really don’t have anything else.” 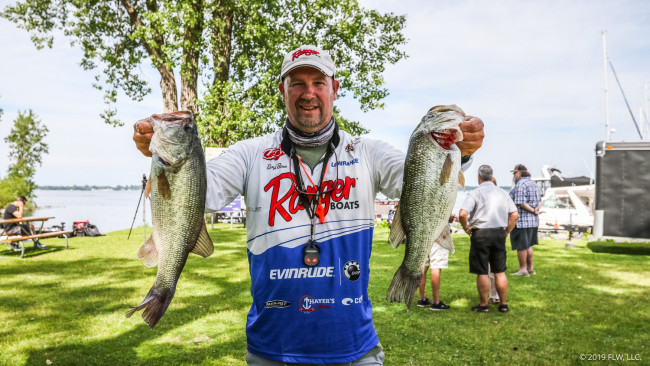 Daryl Biron lives in Connecticut but considers Champlain to be his home waters.

Today, he started down in Ti and fished some of the same stuff as yesterday, including a place where he lost a couple good ones the day before. However, additional boat pressure forced him to adjust strategies.

“Things changed a little bit. There were a lot more boats down there,” he says. “I couldn’t get on a lot of my stuff, so I had to go to some backup stuff. I know the water pretty good so I went to some out-of-the-way stuff that most people don’t know about.

“I’m running a pattern, but the problem is we have some falling water that’s making the pattern a little tougher to run. And pressure hurts too. All that boat traffic down there muddies the water. I noticed when you have muddy water the bite kind of goes away.”

Biron spent the day checking his best areas, fishing if the water was right but pulling the plug instantly if it wasn’t. He’s been consistent for two days, weighing 19-12 and 18-7, and he’ll be in the top 10 if he can keep it up for another day.

“I was saying yesterday I had a lot left,” adds Biron. “Today, I went to check that water and there were other fishermen on it. So I don’t know if I have a lot left.” 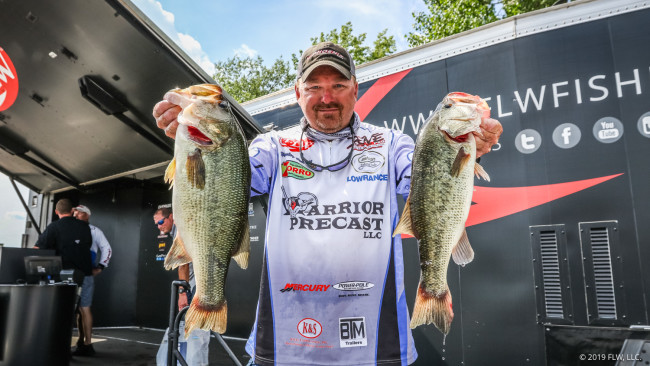 Tennessee’s Hensley Powell added 18 pounds, 4 ounces to the 19-14 he caught on day one to move into the weekend in the top five.

Though he has a handful of spots near Ticonderoga that he hasn’t fished yet, Powell has done most of his damage off one key area that’s produced both largemouths and smallmouths.

“I’m trying to not hit anything and milk all that’s got before I start hitting some more,” he says.

Powell has a couple big smallmouths on beds that he’s holding in reserve, but he’s hoping what’s left of his pattern will provide the bulk of his weight tomorrow.

“I was running a pattern in practice and was able to call my shots,” adds Powell. “In practice it looked like there was an alewife spawn going on down there, and I really caught them good. I’ve not seen that since the tournament started. I think it’s petering down, we’re on the tail end of it or we’re getting down there so late [in the morning] that it’s over with.” 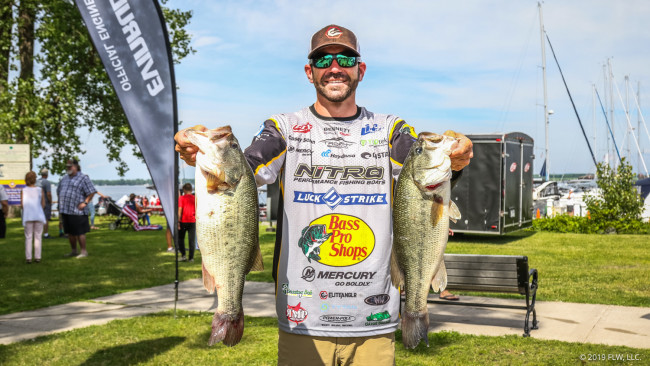 Casey Scanlon is in the Ticonderoga largemouth crowd as well.

“I went down there, started in the same place [as yesterday] and got two keepers right off the bat,” he says. “Basically, it went about like yesterday. I caught a limit pretty quick. I kind of hit a little bit of a lull there, but just like yesterday, when I lost one big one, today I lost two. I caught just as many fish, but the average size was more like 2 1/2 instead of 3 1/4.”

Scanlon is fishing three patterns on several types of cover and running a lot of water. He says there are plenty of fish left in his best areas. If we get the cloud cover that’s in the forecast, he expects to see plenty of action the next couple days.

The results for day two at Lake Champlain will show Dicky Newberry with just four keepers. That's what he weighed in, but it's not what he brought to weigh-in.

Newberry had five in the livewell, but one feisty 3-pound bass executed a last-minute escape while Newberry was bagging his fish to come to the scale.

He ended up finishing 110th. Had he had another 3 pounds in his limit, Newberry would've finished right around the last check place. The mishap sunk any chance of a Cup berth for Newberry, who came into the tournament 59th in the standings.