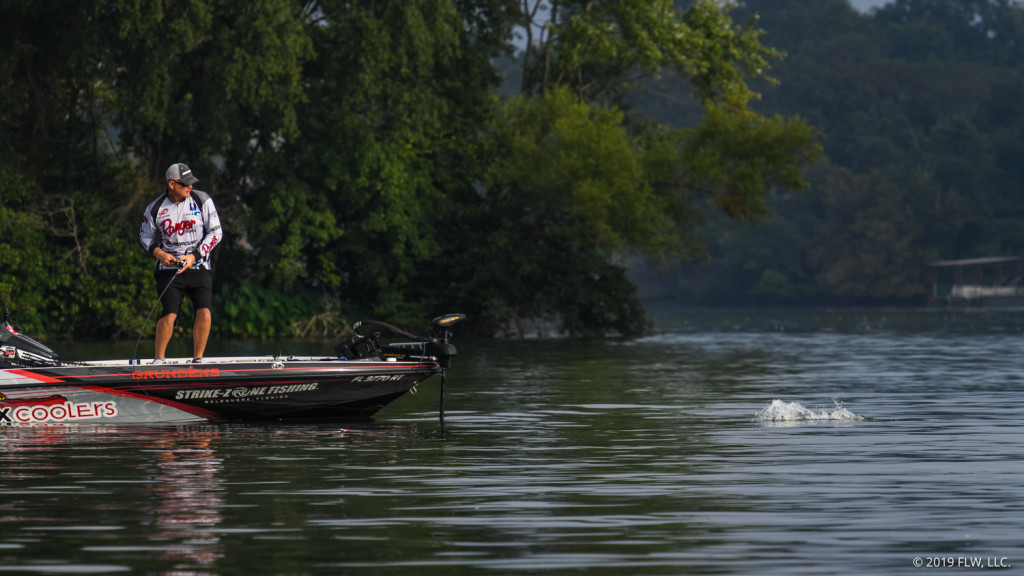 Coming into the FLW Cup at Lake Hamilton, Florida pro Kyle Walters figured the only chance he had to win was to stay away from the bank, where competing with the best in the sport was a tall order, and commit to finding as many brush piles as he could. Save for a few trips up shallow just to check, Walters stuck to his game plan and wound up giving himself a chance at the W. However, never catching a kicker on the final day and the relentless pace of Bryan Thrift put the championship just out reach for Walters, who weighed only 7 pounds, 4 ounces the final day for a three-day total of 33-6.

On days one and two, Walters got the kind of bites needed to win a major championship. On day one, he caught back-to-back 4-pounders in the afternoon, which landed him in contention in third place. On day two, he managed the most dramatic catch of the tournament when he hooked and landed a 3- and 4-pounder on one cast on a crankbait. He wound up 1 pound, 8 ounces back of Thrift going into Sunday.

According to most pros, Sunday should’ve been a catch-fest. The weather was forecast to be sunny and hot, which was ideal for positioning fish tight to cover – shallow and deep – during practice. Instead, the final day turned out to be the toughest of them all.

“It started out real good,” says Walters of the final morning. “I caught a good one about 20 minutes into the day, and I thought it was gonna go good. And, man, it was a grind. I finally got five at probably about 10 o’clock. I upgraded a few times. Then I got on a flurry late and upgraded three times with about 15 minutes to go. I thought one was going to be a big one. It got hung in a brush pile. But, hey, that’s fishing. I had a great tournament.”

Most of Walters’ brush piles were in 15 to 25 feet of water on breaks with deep water close by. His go-to bait was a Texas-rigged 10-inch worm. When the fish wouldn’t eat the worm, Walters threw a SPRO Little John DD crankbait in citrus shad. 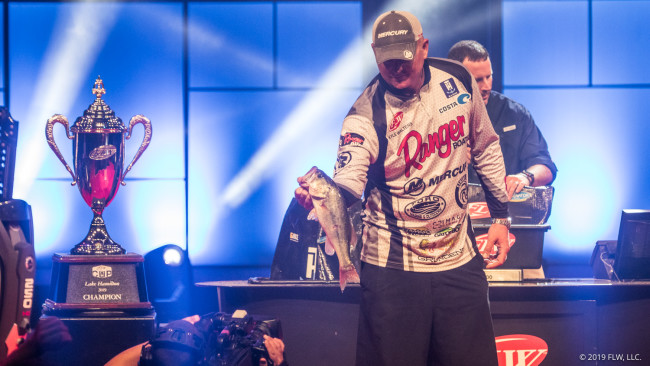 Aside from just finding and catching the fish in the brush, Walters also put together a pretty solid strategy for efficiently working through all of his best piles. The process started in practice.

Not eliminating a brush pile on the first stop was important because, as most pros recounted, the fish were very temperamental in the brush. They could be seen on sonar but wouldn’t always eat. Sometimes it took several stops or a dozen casts to finally get a bite.

In the process of assembling a collection of about 60 red dots, Walters also started his days within sight of takeoff where he could keep tabs on which brush piles were getting hit the hardest. This allowed him to verify that he could get bit in brush in the morning but also to pick out a good brush pile to start on so he could start in a good rotation and wasn’t fishing behind other pros.

Then it was all about running red dot to red dot, occasionally mixing in a new piece of brush he found during the tournament. Walters spent all but 30 minutes over three days fishing below the first bridge from takeoff in the lower end of Hamilton.

“I felt like the bigger fish were down there, and I knew to win I needed to catch big ones,” he says. “So I did what I had to do to try to win the tournament. It didn’t work out, but I don’t regret it. I feel like I put myself in position to win. I just couldn’t get a big bite today.”

By the end of the tournament, Walters had refined his approach even more.

“Today, I didn’t give them as much time as I would in earlier days. I put together the fact that most of the time I got bit pretty quick in them,” he says.