Taking in the first morning of practice with the Texas veteran 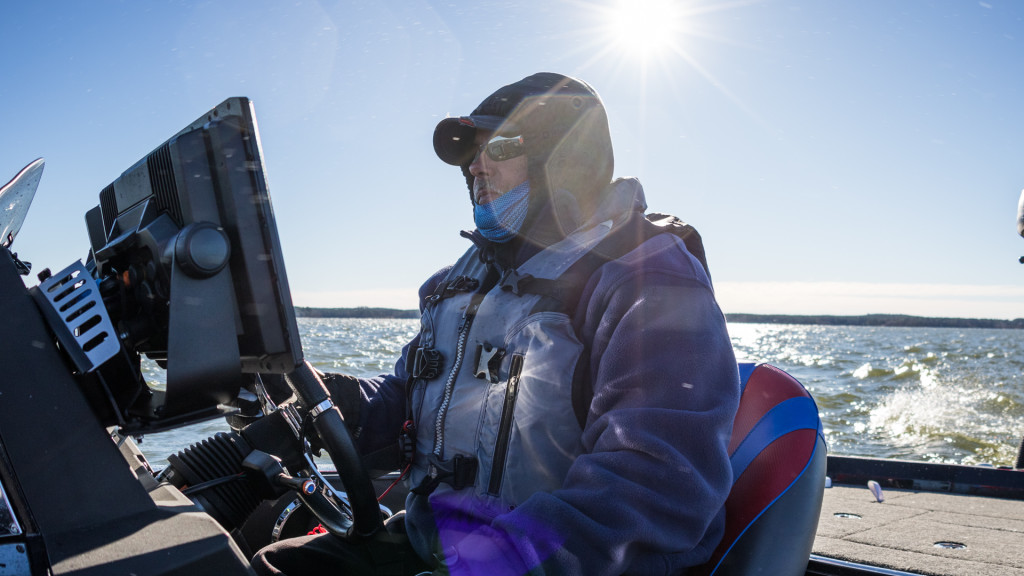 One of the nicest and most experienced pros on the Tackle Warehouse Pro Circuit, Jim Tutt has fished about everywhere, but he calls Texas home. Last year, Tutt finished fifth in the season-opener on Sam Rayburn, and it’s also where he earned one of his three FLW Series-level wins.

Today, I join Tutt at about 9 a.m., after he’s already put a 3-pounder and a bowfin in the boat to start practice and the 2020 season. 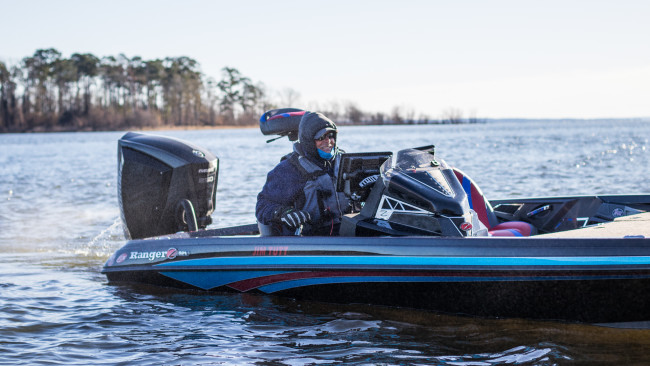 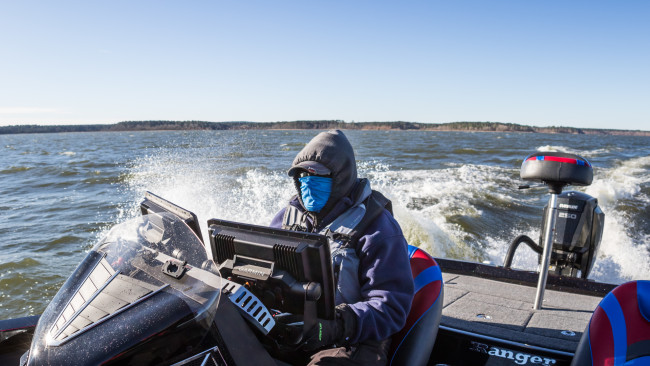 Tutt picks me up at a ramp that’s miles away from the main drag in a Texas forest. He takes a minute to get settled, drinks about half a Diet Dr Pepper and heads off across the lake.

Rayburn can be a navigationally risky place when the water isn’t about 1,000 feet high like it was in 2019, but with Tutt it’s always safe. He’s fished basically every inch of the lake, and when he needs to he skirts around standing timber or a shallow point. 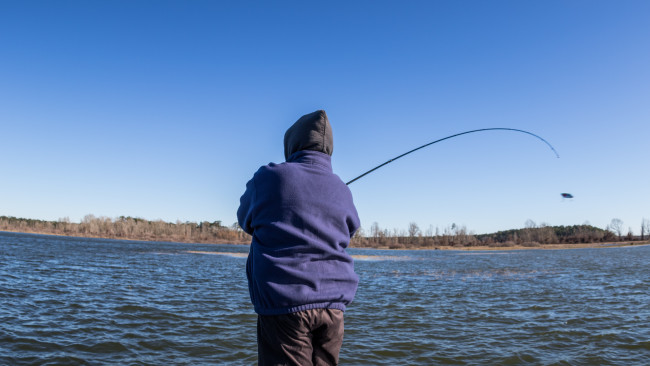 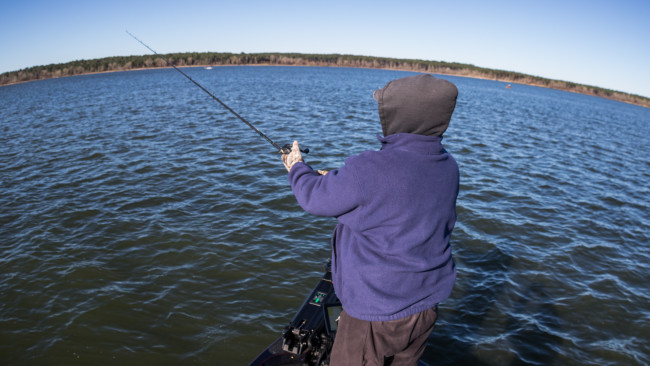 After setting the boat down on a point, Tutt idles a bit to scan for submerged hydrilla. Though he didn’t spend a lot of time on the lake this winter, a pre-practice scouting trip gave him a bit of a milk run of places to check, and this is one of them. Of course, according to Tutt, it’s also a really good spot on Rayburn.

Tutt stops fairly close to an outcrop of hay grass then pulls out a lipless crankbait and begins casting around. Though the water is fairly dingy, he can just make out the dark patches of hydrilla with deeper or grass-free areas next to them. 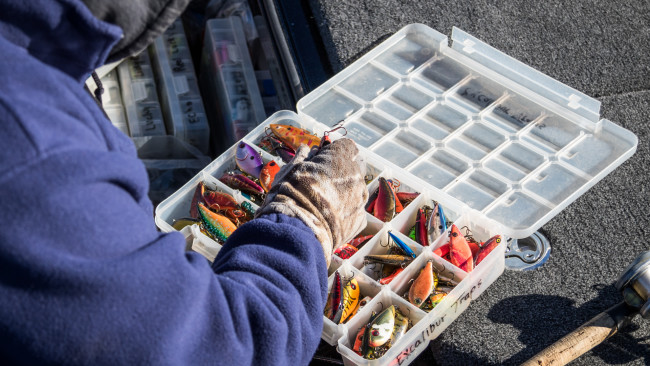 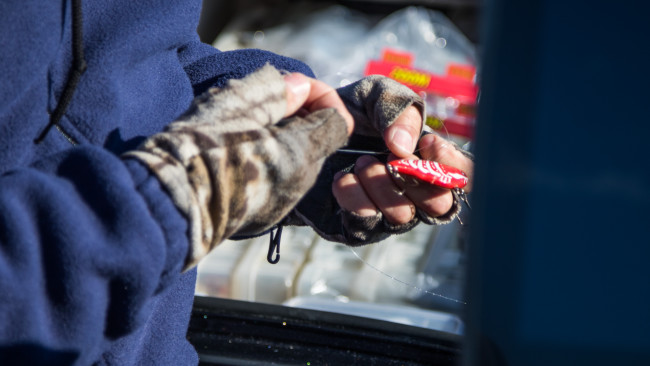 After a bit of rotating between a vibrating jig and a lipless crankbait, Tutt digs up a box of lipless baits and pulls out a fresh one. He says the fish on Rayburn have never learned not to bite a lipless bait, but he’s also got a zillion different ones just in case they don’t want the specific bait he’s throwing. This round, he pulls out a red one with white ribs, which he says was the hot color last winter. 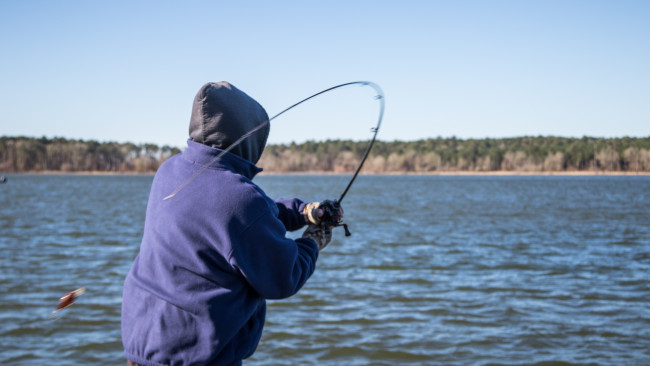 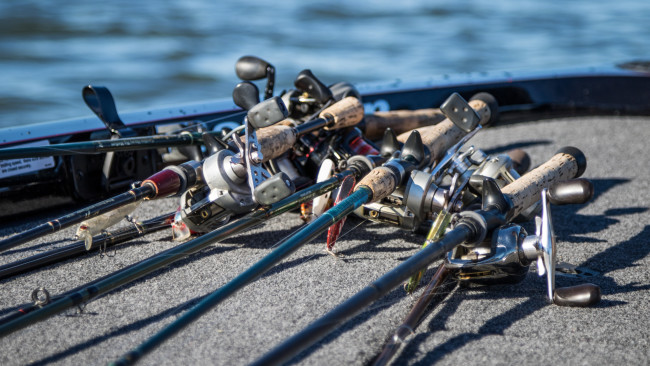 Tutt is nearly constantly cycling through baits as he winds around the shallow hydrilla. While he occasionally mixes in a soft plastic, he mostly sticks to various lipless baits and jerkbaits. He’s come prepared, too, with an absolute stack of rods with different stuff tied on. Most of the baits are in varying shades of red, but he’s got plenty of white and chrome options as well. 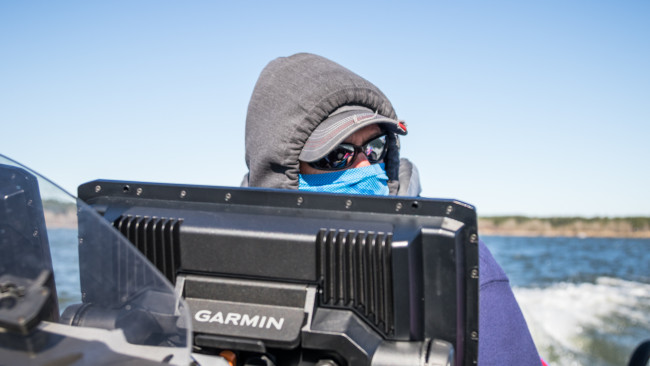 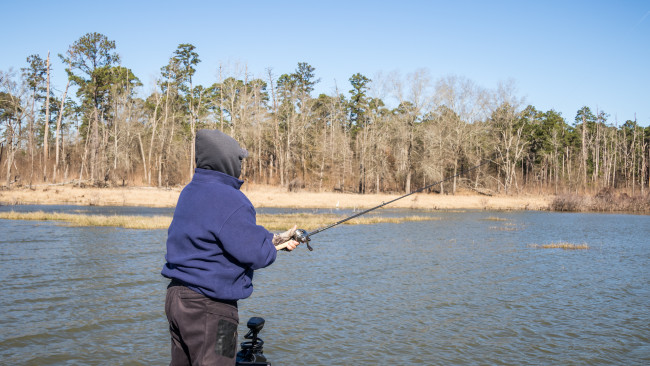 Soon Tutt stows the trolling motor and cranks up to head farther back into the creek we’re in. Along the way, the boat passes through several different shades of water. He finally settles on another grass edge, which he starts fishing with a lipless, but quickly swaps over to a swim jig before mixing in some other stuff.

This edge is generally shallower, and there are fewer other boats around, but there doesn’t seem to be many more bass.

Though we’re on Sam Rayburn, Tutt seems to think the fishing will be fairly tough in this event.

“This is general, but this is the first really extended cold front that we’ve had,” he says. “It hasn’t been fishing super, super good, and if the weather forecast is correct it’s going to be ugly Thursday. I think it’s the case in any tournament, but especially this one, that consistency is going to be very important. Or, you can just catch two 10-pounders and, boom, you’re right where you need to be.” 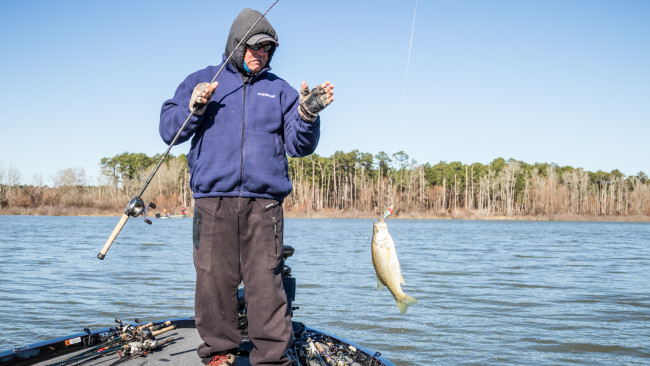 Continuing along the bank, Tutt finally sticks a fish near a little point of hay grass. This bass, which he swings into the boat after a brief fight, is the second fish of the day for him and a welcome sign. According to Tutt, fish No. 2 might fit into a pattern with his first keeper, which has him happy despite the small size of the fish. 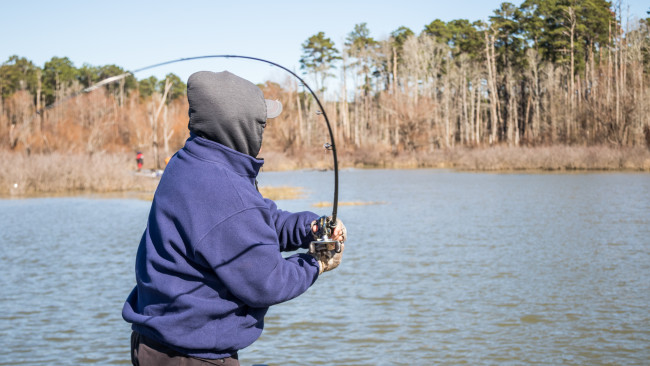 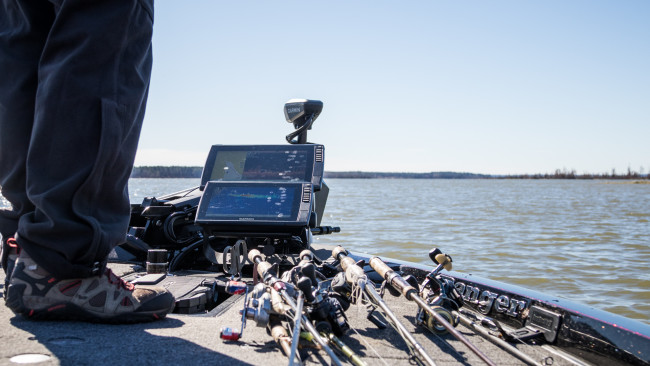 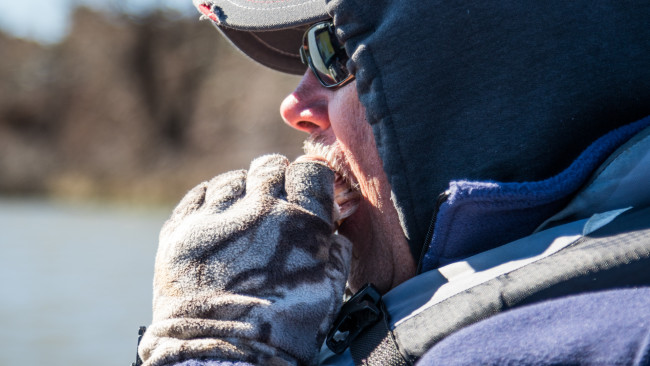 Pretty soon after, Tutt sticks and loses another fish on the other side of the pocket. Then he sees what he thinks is a bass blow up on something near the bank. Overall, it’s been a few pretty decent minutes from the practice perspective.

Still, Tutt wants to keep on the move, and after munching down a ham-and-cheese roll-up, he heads to the next spot. 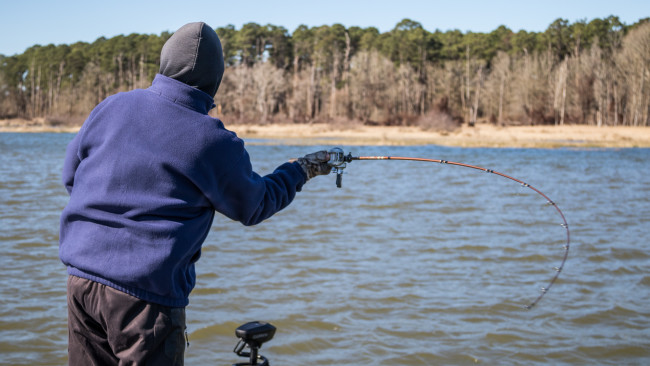 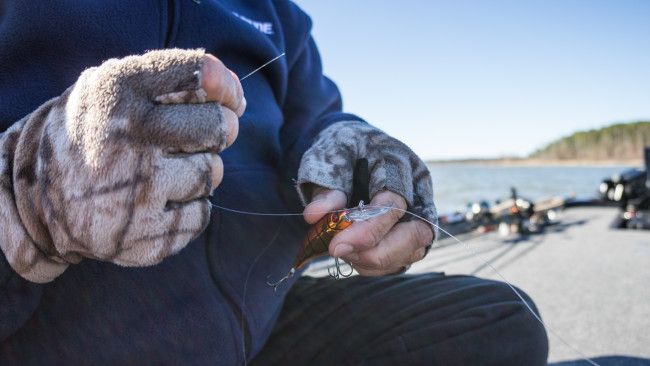 Tutt is yet again fishing hydrilla, but this time he’s looking a bit farther off the shore. Here, he pulls out the Berkley Bad Shad that he did so well on last year. After winging it around a few times without hitting grass, he stops to try a larger size.

“In a way I wish the water was high again,” says Tutt. “I’m glad it’s not, but the spots I caught ’em on are high-water spots, and they’re the kind you can’t find on a GPS. And there are two more I didn’t even fish that I thought about later. But if the water was high and they weren’t on those spots this year I’d be in trouble.”

Tutt knows that he’s got just as much or perhaps more of an edge in Rayburn knowledge with low water. He’s been fishing the lake forever, and tells me that he sealed the deal on a Phoenix Bass Fishing League Cowboy Division Angler of the Year title the year I was born in this very creek. 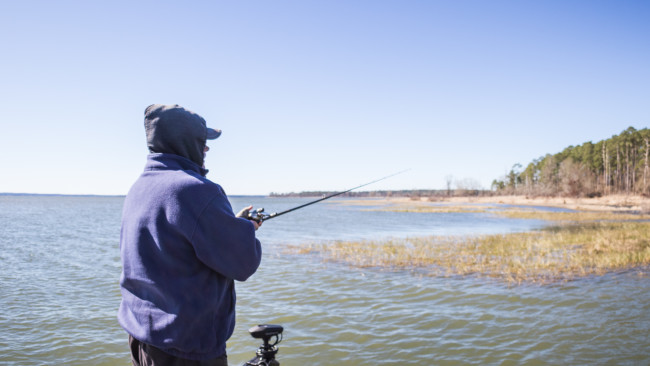 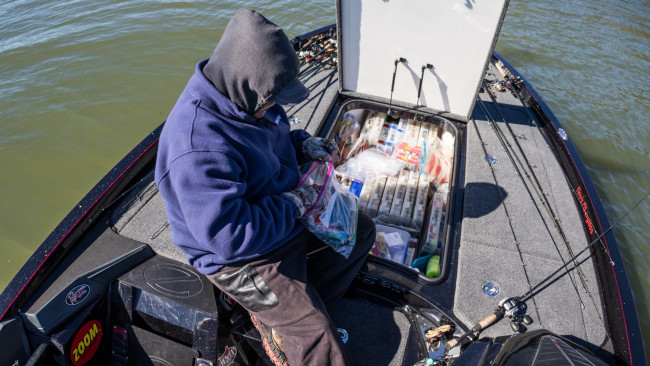 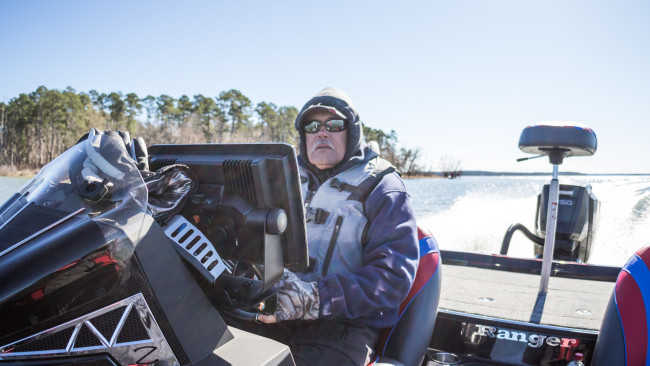 Slipping shallower, Tutt keeps plugging away along the edge of the hay grass. Now he’s mixing in a stick worm a bit, and he’s back to liberally applying a lipless crankbait. After hooking and losing a little one on the plastic, Tutt decides to crank up and pop across the creek. 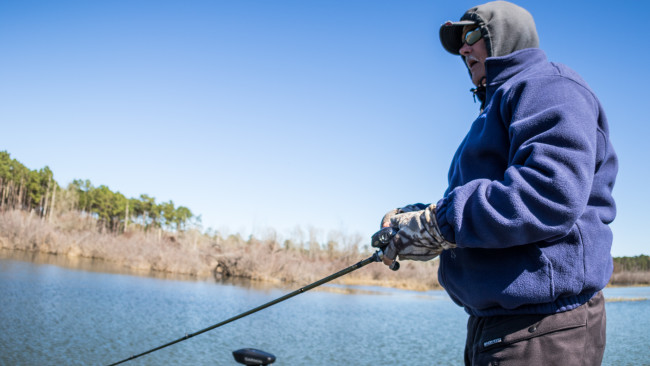 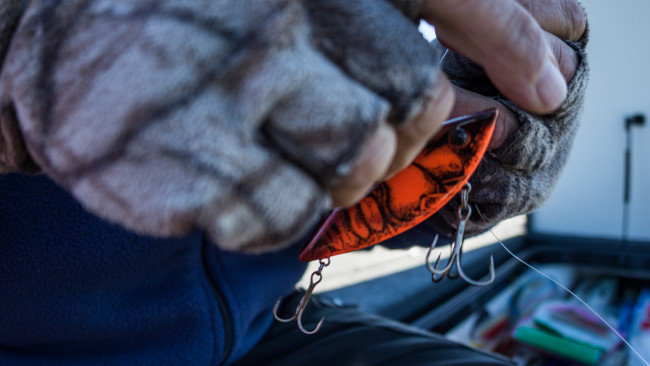 Tutt makes a shallow pass close to the hay grass on the other side and then eases out a bit. A change is in order, and Tutt ties on a 3/4-ounce lipless crankbait in the same color he used when he won here in 2002. Tutt regales me with the tale as he slings around off the edge of the hydrilla with no success.

Then, it’s time for a move. 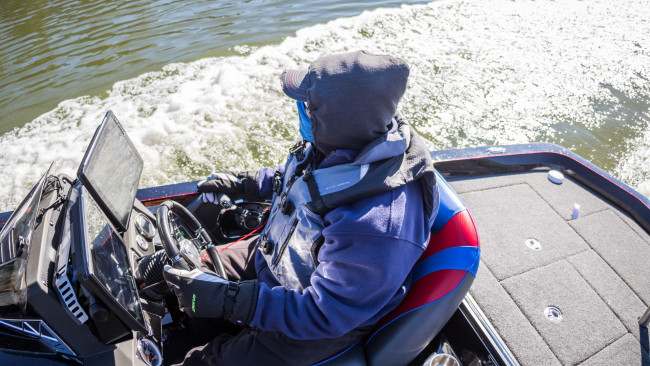 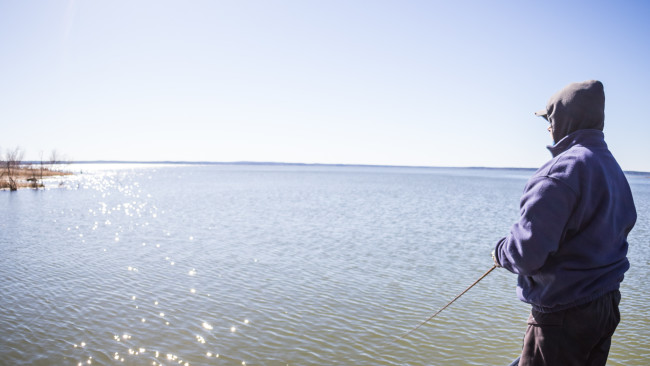 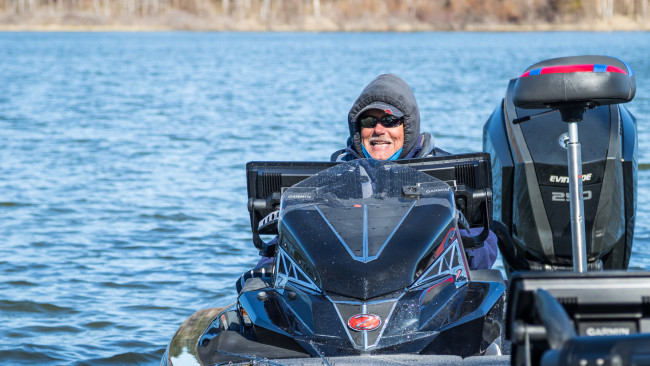 Before dropping me back off, Tutt decides to run a couple of places closer to the main lake. Both seem to be long shots – he didn’t scout them in pre-practice – and they’re both equally unproductive.

So, with a pretty slow late morning and early afternoon in the rear-view mirror, Tutt drops me off and heads back out to explore. Last year, he only had two bites on day one of practice, so he knows his course is barely set this time around.