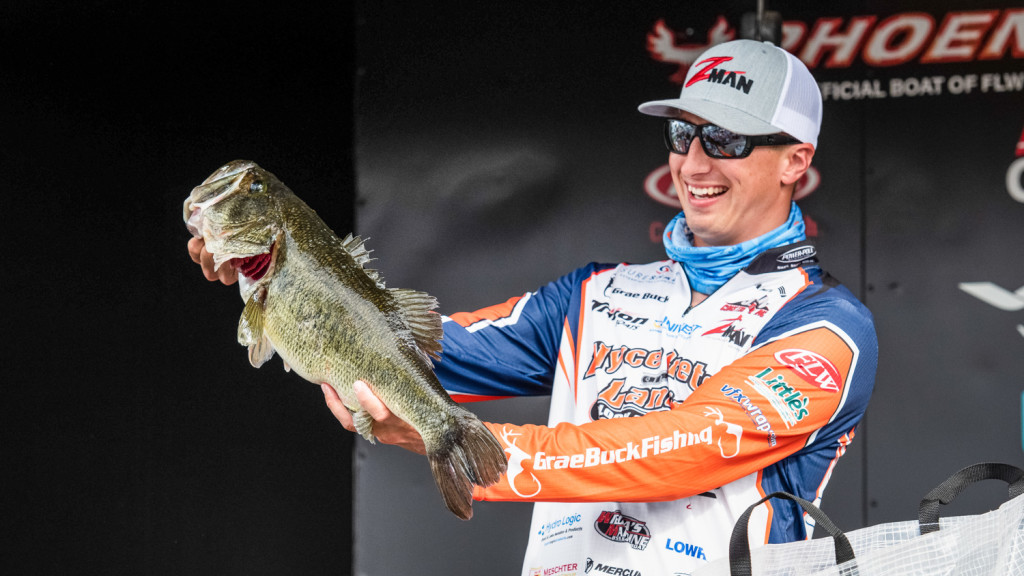 From time to time, FLW checks in with its anglers to find out what they’ve been up to, what they’re listening to, who they’re following and what they’re working on to improve their fishing game. This week, we caught up with Pennsylvania’s Grae Buck.

How have you been passing the time without tournaments lately?

I’ve been fishing a little around home. We’ve got a couple small lakes that I’ve been catching some largemouth and smallmouth out of. Most are about 2,000 acres. The one, you can use your big motor, but you can only do 40 mph. The other one has a 20-hp restriction, so I have to trolling motor around. That was actually where I did that Facebook Live (on the FLW page). It’s called Lake Nockamixon. I caught a 5 1/2. That’s actually the biggest one I’ve caught out of there. It’s keeping me entertained. And I’ve been doing a bunch of work around the house, too. We moved in here in October, so there are a bunch of little projects, but I’m also working on putting up a pole barn to keep my boat in. There was an old building here, and we ripped that one down on Easter. Now I’m working on building the pad up.

What do you miss most about being on the road?

I would say just the competitive part of fishing. It was a strong start to the year here (he’s in sixth in the AOY race), so I would’ve liked to have kept that momentum going. I’m just ready to go catch them when it actually matters again. The good thing is I haven’t fished around Pennsylvania hardly ever in the last 10 years. So that’s kind of nice. It’s better than I remember it being. I don’t know if I’ve gotten better or the fishing has gotten better.

So, I’ve watched “Ozark.” I finished that recently. What else … I watch “Survivor” for some reason. It’s like a stupid show I’m addicted to. Those are the two that I’ve watched the most recently, and there are a bunch of podcasts I’m listening to when I’m working on the boat or around the house. I listen to the FLW one a lot. Josh Bertrand has that “Angler’s Happy Hour.” I listen to that one quite a bit. He started it probably in the fall and has only had about 25 episodes. I’m going to be on it. I think Sunday I’m going to do one. It’s him and two guys he guides with out in Arizona (Rob Vanderkooi and Nic McMurry).

Who are you following on social media right now?

Just watching the fishing guys; my buddies. (Matt) Becker’s been fishing a bunch, catching a lot of smallies out his way. Dylan (Hays) has been doing a bunch of bed-fishing down in Arkansas.

What bait or technique are you hoping to master next?

I’ve been playing with those big glide baits a little bit. I’ve caught some fish on it. I caught one the other day that was 4 1/4. It was a smallie. That was pretty cool. The thing crushed it. I’ve only caught six or seven on it so far, but I’m starting to get some feel for it; when they’re going to bite it. It seems like when you pause that thing, not even meaning to, they come up and crush it. I’m trying to get a little more comfortable with it for when we go back down south.