Wheeler leads with 24-9 on Chick 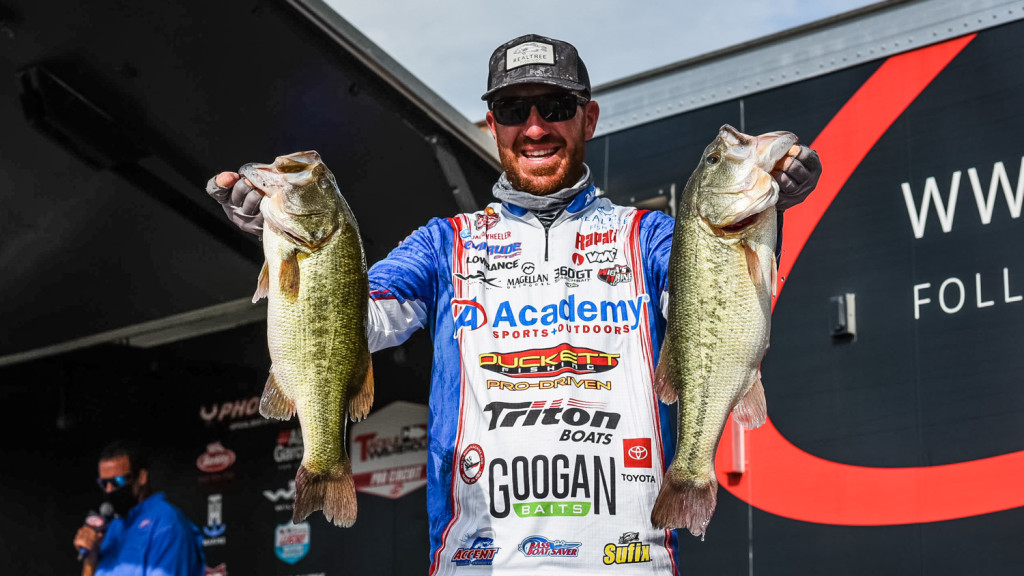 Fresh off a win in the Toyota Series event on Pickwick Lake and a top 10 in the MLF Toyota Heavy Hitters event on the Kissimmee Chain, Wheeler put his local knowledge to the test on Tuesday to sack up 24-9 and grab the lead on his home lake.

To take home another major title on the fishery like he did back in 2014, Wheeler will have to hold off Cox; a pro who won the last FLW event he fished on Chickamauga – along with 200-plus other top anglers from the Pro Circuit and Bass Pro Tour.

Fortunately, having moved to the area three years ago (along with already having years of experience prior), Wheeler was able to overcome having the last boat draw in a massive and talent-laden field by keeping an open mind.

“I ran a lot of places; maybe 30 or 40,” says Wheeler, who admits he didn’t catch many fish today. “Just trying to understand what’s going on. I was trying to keep an open mind between the shallow bite in the grass and offshore.

“You can’t get caught up with one deal this week. It’s going to take a little bit of everything this week; a little hodgepodge deal. So that’s my game plan is to not commit to one particular pattern.”

Between the five fish Wheeler weighed in today, he says three came shallow – either on the bank or in grass. The other two came offshore. There was no set pattern, either, as he figures he had 20 rods on his deck. Yet, one thing definitely helped one of his bites.

“[The weather] made a huge difference in the shallow bite,” says Wheeler. “You had cloud cover and wind and rain. Those fish are not always that easy to catch. These fish are Florida-strain largemouth and hybrids. They’re sometimes very fickle to get to bite. The weather helped some of those places I was fishing.”

It also may have hurt the ledge bite, which is what the majority of the field seemed keyed on today. From the Harrison Bay area on down the lake, it was a constant line of boats fishing offshore, and it wasn’t uncommon to see as many as six boats all congregated together on a single school.

Wheeler figured that would be the case, hence his open game plan. He still figured he’d have some “sneakier” stuff to himself, though. In that, he was mistaken.

“There is a lot of fishing pressure offshore,” says Wheeler. “Some of those places I thought were a little bit out of the way or a little bit sneakier, boats were all over that stuff. I was like ‘what the heck?’ It was really interesting to figure that out. These guys are just so good at finding stuff.

“You know, we’ll see how it goes tomorrow with me having the first boat draw. This is a lake I seem to gel with, but some days it will leave you scratching your head. We have three days left in this tournament. There’s a lot more fish to be caught. I just hope be consistent and bring in 20-plus-pound bags every day to be in contention at the end.” 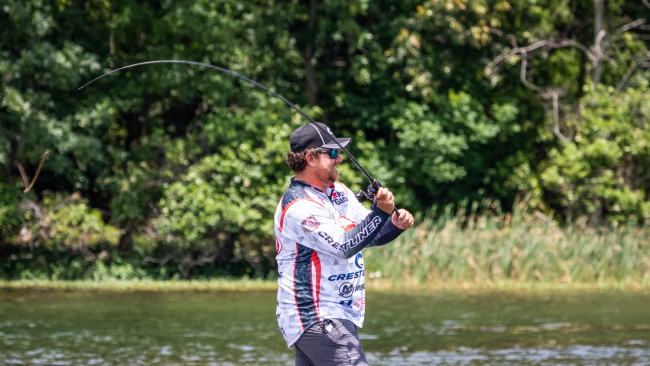 There was a moment this morning when Cox thought his hot streak on Chickamauga had come to an end. And then, he did what he tends to do, and junked his way up shallow to another big bag to keep him in contention.

“I was kind of shocked,” says Cox. “I had an area up the river I really thought was going to put out, and I got up there and the water was down at least 8 inches. It was just no good. I was actually kind of sad as I started running back down with the rain pelting me in the face. I really thought that was the end of the streak.”

Two big bites at around 9 a.m. changed that mindset quick.

“I started hopping my way down, just hitting random shallow stuff; anything that looked good,” says Cox. “I hit one spot and I busted two big ones on a frog almost back to back. As soon as I got those frog bites I was like, ‘I’m glad we’re back.’”

Cox admits it was a struggle, as he only got seven bites all day, with his remaining three fish coming on a jig and a wacky-rigged Berkley PowerBait MaxScent The General casted to isolated stumps and rough spots. Still, one thing he noticed that gave him optimism for tomorrow was the water level rising back up throughout the day.

“It’s tempting to go back and throw that frog,” says Cox. “I really need to see what water is doing. If it’s up, I’ll go back up that river.” 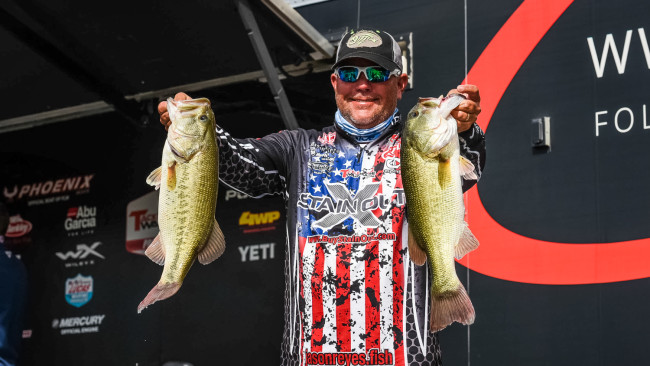 Jason Reyes really tried to be like everyone else and make the offshore bite go today. When he only had three small keepers come 11 o’clock, though, he finally decided to make a change.

“I started going back and forth between shallow and deep,” says Reyes. “I hit a couple little stretches up shallow where I didn’t catch a ton, but the quality was there.”

Admittedly, Reyes doesn’t know what is going on up shallow, whether it’s a bream pattern or something else. He just knows the quality fish are there. It’s just a matter of grinding, tossing a worm and going an hour without a bite if needed. Still, he caught enough on day one that he actually called it quits early.

“I got to a point where I didn’t want to burn up a 4-pounder, because that’s all that would help,” says Reyes. “So, I’m kind of excited to see tomorrow if the quality continues. I tried to get dialed in the grass, and I think I started to figure out where they want to be.” 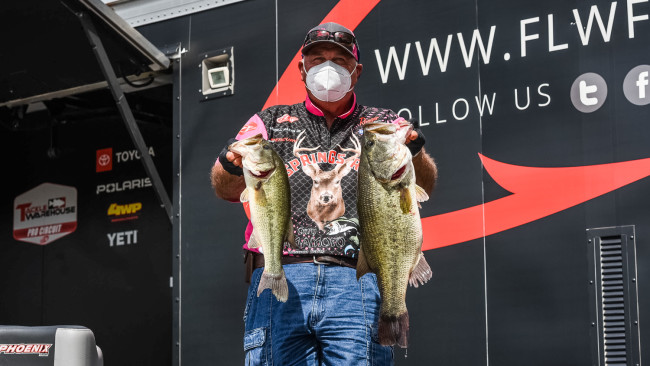 Chickamauga is known for its giant Florida-strain largemouths. Lendell Martin Jr. sure caught himself one – a 9-8 donkey that took big-bass honors and anchored his bag.

“That was my first fish of the day,” says Martin. “I was throwing a spinnerbait in pretty clear water, and about 15 feet from the boat I saw her eat it. It was just a vicious strike – the battle was on. It was a blessing I caught one like that.”

Martin spent most of his time fishing shallow, alternating between grass and laydowns; just “fishing whatever was in front of him.”

“I may try fishing offshore if I make the cut, but tomorrow, I’m going to start shallow,” says Martin , who caught three of his keepers on the spinnerbait. “I don’t think as many boats are up fishing shallow compared to deep. I don’t know if can do what I did today every day up shallow, but we’ll see.” 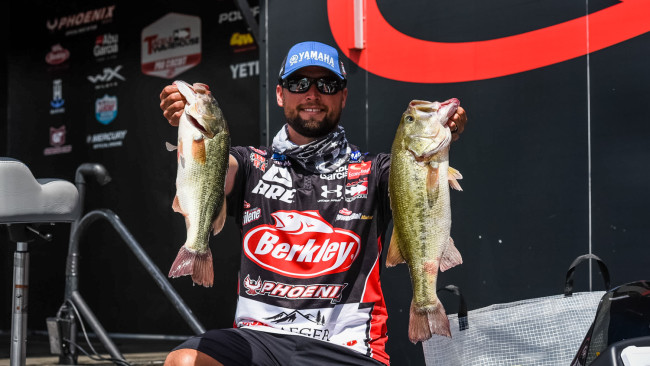 Few anglers have had more success with magic honey holes than Lucas. He’s hoping he’s found another one this event.

Lucas says he had a tough morning, as he couldn’t get into a groove fishing offshore – the only angler in the top five solely dedicated offshore. He cycled through five or six spots when he noticed the spot he started the morning on was still open. He decided to try it again, and he’s glad he did.