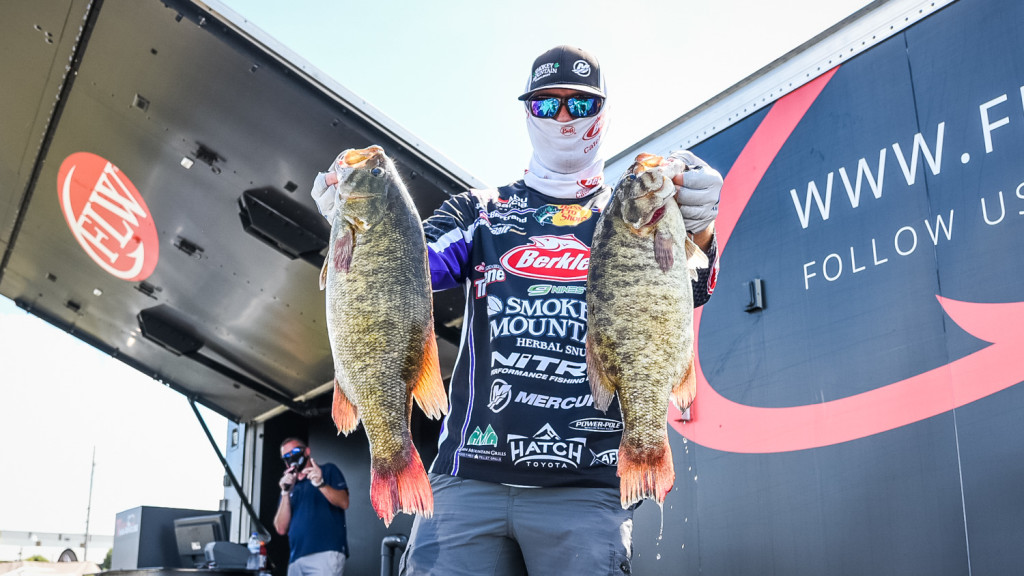 Lake St. Clair may have been the main attraction, but it was the undercard that stole the show, at least for today.

Technically, it’s hard to call Lake Erie the undercard considering it was the launch site of the Tackle Warehouse Pro Circuit Super Tournament. Yet, with how strong St. Clair has been fishing lately – a recent Phoenix Bass Fishing League presented by T-H Marine event there had 29 limits over 20 pounds – Erie almost seemed like an afterthought as guys considered making the 100-plus-mile run up past Detroit.

Well, plenty of guys made the run today (and were beaten up for it), but of the seven bags topping 20 pounds today, only one came outside of Erie. And none were bigger than Josh Bertrand’s 22-pound, 6-ounce leading weight. Yet, don’t expect him or anyone else to be singing Erie’s praises just yet.

“I mean, it was not an easy day of fishing to be honest,” says the San Tan Valley, Ariz., pro. “I think I only had seven keeper bites. It was tough, but it worked out perfectly. That’s really the bottom line.”

Really, nothing came easy today regardless of an angler’s decision to stay in Erie or run to St. Clair.

For those that ran, they suffered through a near two-hour boat ride just to make it to the smaller lake, and it sure wasn’t a smooth ride at that. Reports of broken trolling motors and various other boat components were the common theme for those that braved the run thanks to some decent-sized waves. Worse, their reward for their efforts was little fishing time and less-than-stellar fishing. Only Gerald Sphorer (seventh with 20-0) and Tommy Dickerson (eighth with 19-13) can say the run was really worth it.

As for those that stayed in Erie, largemouth were barely a factor come weigh-in, and the top pros all reported very few bites.

“It’s risky both ways,” says Bertrand. “It’s risky to run and fish for numbers, and it’s risky to fish close and not. I was around a lot of guys that didn’t catch limits. I barely caught a limit. It’s very difficult to catch five.”

Yet, if an angler could get five in Erie, they seemed to be the right five.

Bertrand says he hit about 15 different areas today to “look at everything [from practice] to see what’s good and what’s not.” Doing so allowed him to find just enough good bites on his Berkley PowerBait MaxScent Flat Worm on a drop-shot, but he had to really slow do because of the rough water.

For at least today, slow, steady and staying close paid off, but Bertrand and many of the other pros at the top don’t know if it will tomorrow.

“I don’t feel great about any of the days moving forward,” says Bertrand. “They could go really well, but they could not. Today was one of those days you’re thankful for because it just worked out.” 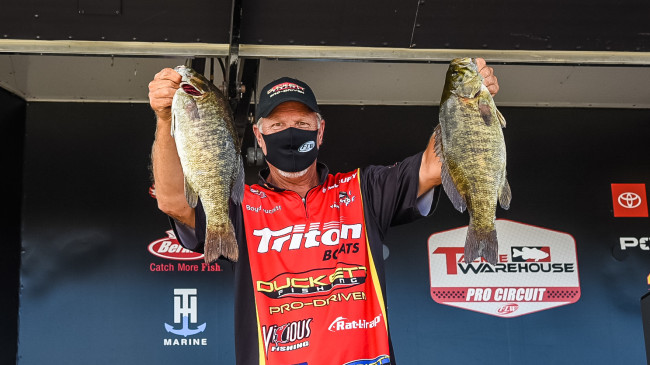 If it had been just a little calmer, Duckett may have thought about running to some fish he’d located near the mouth of the Detroit River. Seeing the waves, though, sealed his decision to stay in Erie.

“I don’t have a school anywhere,” says Duckett. “Just a fish here and a fish there. But I felt I was getting enough bites to at least fish here day one. And then if have to, I can make a run.”

Fishing around the islands just north of Sandusky, Duckett keyed on “little hard spots and shell beds,” and while the waves made things a little more difficult, he says they never hindered him too much.

“I could still stay long enough to make 20-30 casts before moving on,” says Duckett. “If it had been windier it would’ve been way different because then you have to drift. I couldn’t have fished as thoroughly.” 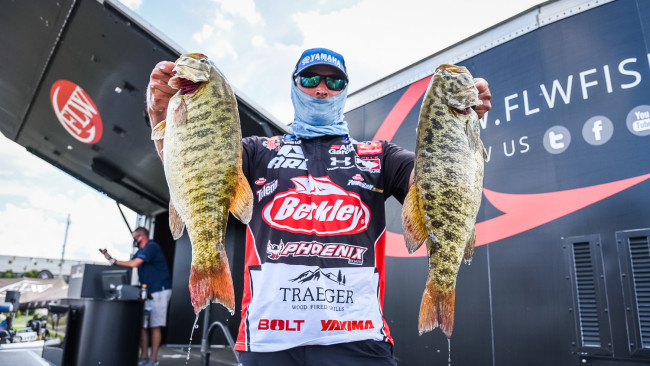 It’s hard to be disappointed weighing in the third-largest bag on day one, but when you’re scales lie and tell you have the largest, it can be a little disheartening, as Lucas found out today.

According to his scales while weighing his fish on the water, Lucas had near 24 pounds, but once he got back to shore, he realized his scales may have been malfunctioning slightly because of the mic gear he was wearing while being on FLW Live.

Still, Lucas stayed in Erie and continued on his smallmouth hot streak after winning the Major League Fishing Bass Pro Tour event on Sturgeon Bay just a couple weeks ago.

“I’ve got a little momentum going on [smallmouth], and I really want to keep it going and win this tournament,” says Lucas.

The Alabama pro never even sampled St. Clair in practice because he felt it was too far and he believed the tournament will be won in Erie. So he has a couple areas with some specific spots on them he’s keying on. As for the bait, it’s no secret. 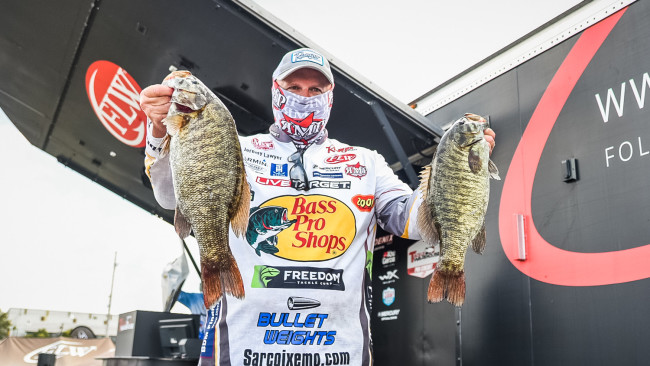 Lawyer has plenty of experience catching smallmouth back home in the Ozarks, but he wouldn’t consider himself great at targeting them. Hence his decision to stay in Erie.

“Really, I don’t feel like I’m a good enough smallmouth fisherman to go over [to St. Clair] and catch them in three hours,” says Lawyer. “It took me all day today, and it’s a good thing I had a long day because I made a couple big culls in the last 20 minutes that culled me up 2 pounds apiece.”

Based on practice, Lawyer figured he could get three bites in Erie a day for sure, and if he could get five they’d weigh 18 pounds. Today, he got seven and weighed over 20.

“So I hope I get seven more tomorrow,” he adds. “But I could go out and catch two very easily.”

He’s not lying, as he went four hours without a bite and didn’t fill his limit until around noon today.

Fortunately, he has an early boat draw tomorrow that should allow him to a spot he couldn’t get on today, which has him excited. 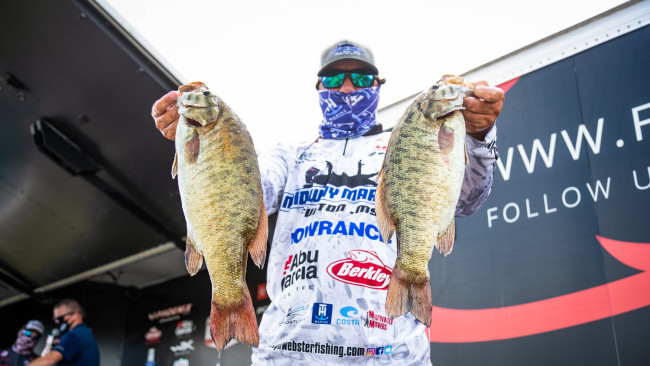 In terms of keeping things simple, it doesn’t get much more simple than what Webster is doing.

He hunkered on one “rubble field, wandering around looking for rocks to pitch a Berkley PowerBait MaxScent Flat Worm on a drop-shot.

Fortunately, his stubbornness paid off when around 1 p.m. he caught 4- and 5-pounders on back-to-back casts to effectively end his day. But like everyone else, bites were at a premium.

“They’re hard to catch, but when you get a bite it’s a good one,” says Webster, who only got seven bites. “There’s just no little ones there. They’re all 3, and most 4 plus. You just can’t make a mistake.”