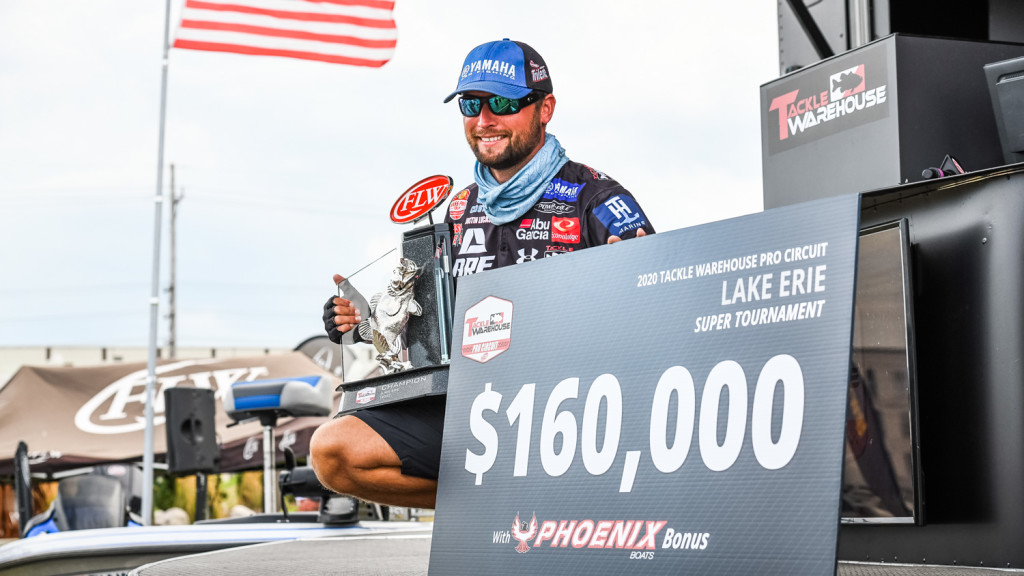 From practice on, Justin Lucas felt this was his tournament to win, and he felt it’d take 20 pounds a day to do it.

He came real close to meeting his goal-weight estimate; just a little short with 79-2 for the tournament, which made it real close come weigh-in. But in the end, his feeling held true.

Battling it out in big waves all day, the Guntersville, Ala., pro brought in the biggest bag of the final day (19-10) to take down Jacob Wheeler by just 1 ounce to win the Tackle Warehouse Pro Circuit Super Tournament on Lake Erie. Because of the FLW PHOENIX Bonus, he took home an additional $35,000 in contingency money for a total paycheck of $160,000. 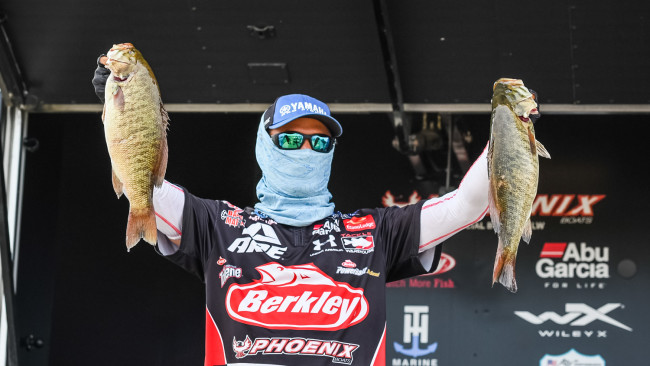 “Where’s the hospital at?” says Lucas on stage after beating Wheeler by just the single ounce. “I knew Wheeler, he said he had 17 pounds, and I know he’s a little sandbagger. So, I knew it was going to be really close. I thought it was a tie, and I thought he won. I was sitting there deflated, because I thought he won.

“I’m at a loss for words. This one feels good. I’ve never won that much money in my life.”

It’s hard to believe a pro originally from California and now Alabama could be on top of the smallmouth world, but Lucas certainly is right now. Just a couple weeks ago, he won the Major League Fishing Bass Pro Tour event on Sturgeon Bay crushing smallmouth, and then he kept that momentum rolling with brown fish here. And both wins came using the exact same tackle and pattern.

He was still using the same Berkley PowerBait MaxScent Flat Worm (green pumpkin) on a drop-shot with a ½-ounce weight and No. 2 hook. He threw it on a 7-foot Abu Garcia Fantasista Premier rod with a Abu Garcia Revo MGXtreme reel spooled with Berkley X5 Braid Crystal to an 8-pound-test Berkley Trilene 100% Fluorocarbon leader.

And the pattern was just spending the majority of his days glued to his electronics actually looking for fish swimming around large boulders and structure. When he saw one, he’d pitch out to it and often hooked up.

One key difference, though, was just how much tougher it was to get bites here than at Sturgeon Bay. Instead of cycling through dozens of fish a day, Friday was Lucas’ best day in terms of bites, and he only got eight all day.

“It’s really tough out there to get bites,” says Lucas. “So many people were out there in practice where I fished, and they bailed on it because of how tough it was. I just really had to comb everything over, finding every nook and cranny. It wasn’t a lot of bites, but the quality out there is insane.” 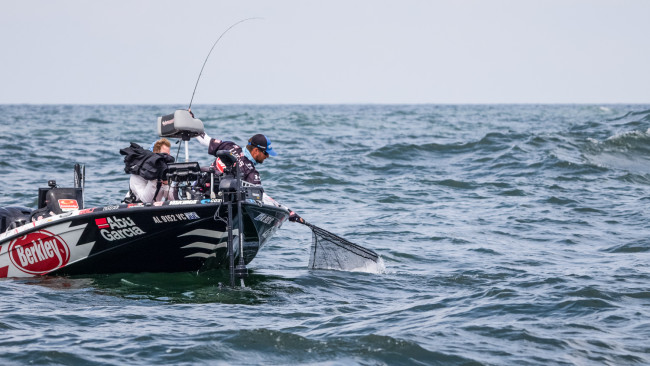 While many pros risked the 100-mile run to Lake St. Clair in order to get higher numbers of bites, Lucas dedicated himself to two areas around Gull Island Shoal and Kelly’s Island Shoal, both right near the Canadian border. Of course, when the waves steadily got worse throughout the event, Lucas was plenty happy to be staying in Erie as opposed to getting his fillings knocked out on the run to St. Clair. Then again, the big waves didn’t make things easy to start today.

“When I started this morning, I was expecting to get bit [on my first spot],” says Lucas. “When I didn’t, I thought it might be a grinder today. The waves were really big, and it was really hard to move around. Really time consuming. It took me an hour to go 17 to 18 miles.” 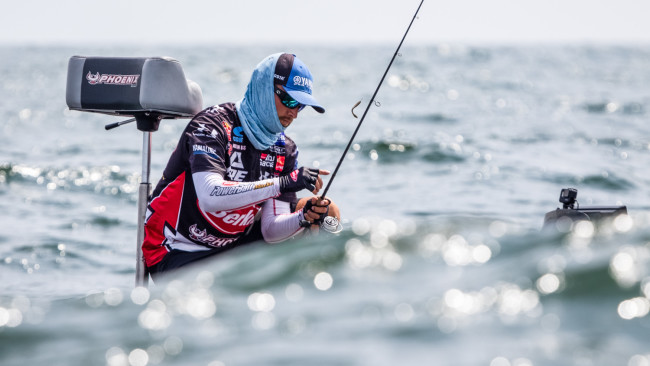 After a short move produced a 4-pounder, Lucas made what ended up being the winning decision to hit a unique piece of structure the fish “hadn’t really been on that great” but he thought might turn on with the switch to an east wind.

“I tried to start there this morning, but the waves were just too big,” says Lucas of the special spot around Kelley’s Island Shoal. “Honestly, think it’s an old sunken channel marker. It’s a big piece of steel down there. I don’t know if it’s a boat or what it is. It’s not hard to stay on it because of how big it is. It’s like 16 feet long and it’s 5 feet tall. I’ve been calling it a space missile all week.

“They were using the back side of it as a current break. That’s why it was good today as the east wind started blowing on it again, the current would wash over that thing, and they’d be sitting on the back side.”

In short order he was able to get seven bites that ended up being just enough to knock off the best angler in the sport right now. And if that wasn’t special enough, Lucas admits the location and tournament organization added a little extra.

“I came here in 2013,” says Lucas. “That’s when I left FLW after qualifying for the Elite Series because of a good finish here. So, to be back and to win here – I never won an FLW [Tour] event – is really cool.”