It’s pretty much just a pile of Flat Worms 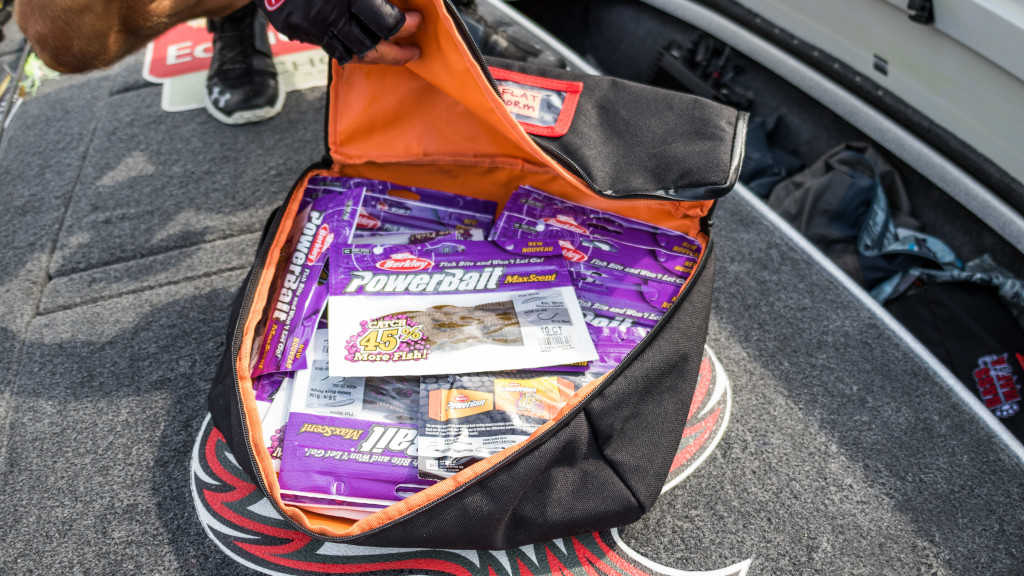 There were no secrets this tournament in terms of baits.

The overwhelming majority of the Tackle Warehouse Pro Circuit Super Tournament field at Lake Erie was throwing a drop-shot, with a good portion of them using the same lure on it. Yet, there were a couple of oddballs who switched up their offerings to give them an edge. 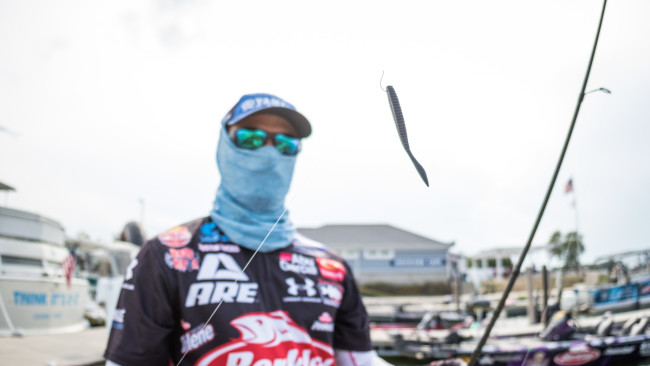 1. Justin Lucas kept his smallmouth streak rolling with a Berkley PowerBait MaxScent Flat Worm (green pumpkin) on a drop-shot with a ½-ounce weight and No. 2 hook. He threw it on a 7-foot Abu Garcia Fantasista Premier rod with an Abu Garcia Revo MGXtreme reel spooled with Berkley X5 Braid Crystal to an 8-pound-test Berkley Trilene 100% Fluorocarbon leader. 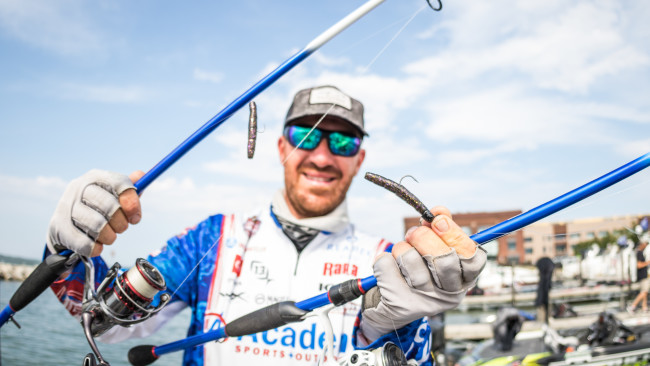 2. Jacob Wheeler kept his historic streak going doing what he does best – staying versatile. He switched from Erie on day one to St. Clair on day two then back to Erie the final two days. While he tossed a number of lures, his main two were a Googan Baits Rattlin’ Ned on a ¼-ounce VMC Finesse Half Moon Jig and a drop-shot with the Rattlin’ Ned and “some fluke-style baits and worm-style baits.” He threw both on a 7-foot, 2-inch medium-heavy Duckett Jacob Wheeler Series Spinning Rod and 8-pound-test Sufix NanoBraid. 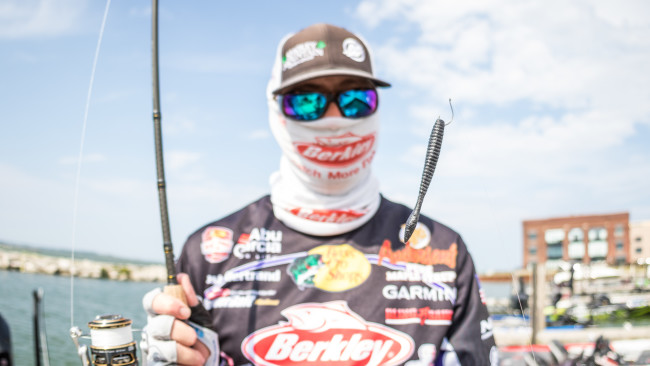 3. A number of top guys early on came from Gull Island Shoal in Erie, but only Bertrand was able to sustain the success on the spot and nearly pull off the win thanks to a Berkley PowerBait MaxScent Flat Worm (green pumpkin) on No. 1 Berkley Fusion19 Drop Shot hook with a 3/8-ounce XPS Tungsten weight. He threw it on a 7-foot Abu Garcia Fantasista Premier rod with an Abu Garcia Revo Premier reel and 8-pound-test Berkley X5 Braid Crystal tied to an 8-pound-test Berkley Trilene 100% Fluorocarbon leader. 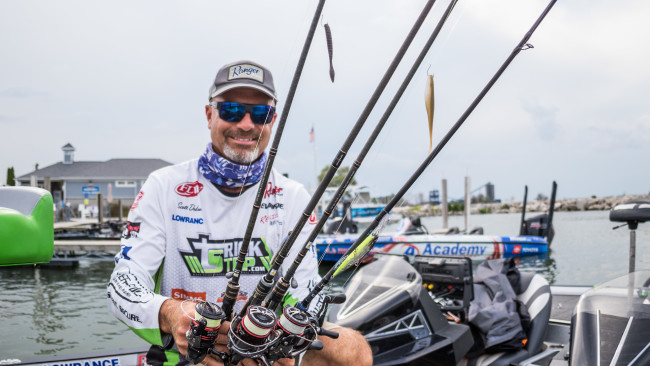 4. Scott Dobson actually spent the majority of his time in the Detroit River fishing current spots. There, he’d start by throwing a Duo Realis Jerkbait 100DR or a Lucky Craft Pointer 100DD in chartreuse shad. If they followed that but didn’t eat, he’d immediately pitch back a 3/8- or ½-ounce drop-shot with either a Strike King 3X ElazTech Baby Z Too Soft Jerkbait, Berkley PowerBait MaxScent Flat Worm or a Poor Boys Erie Darter. He fished that on a Dobyns Champion Extreme HP 743 spinning rod and P-Line braid with an 8-pound-test P-Line Tactical Fluorocarbon leader. 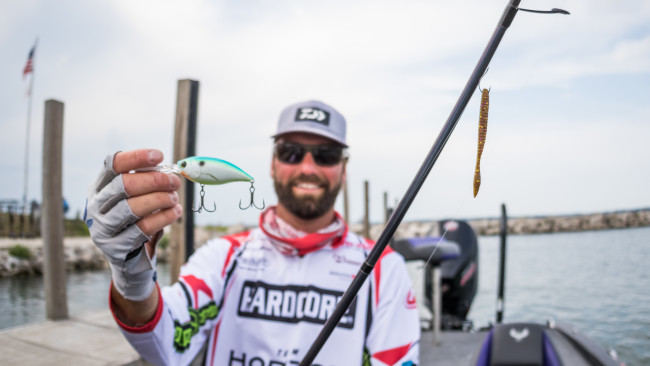 5. No one may have caught more smallmouth this week than Spencer Shuffield, who ran to St. Clair all four days to spy fish with his Garmin Panoptix LiveScope. When he saw one, he’d pitch a Berkley PowerBait MaxScent Flat Worm in natural shad on a drop-shot paired with a No. 1 Gamakatsu TGW Drop Shot Hook and a ½-ounce Ark No Chip Tungsten Drop-Shot Weight. He threw it on a 7-foot, 2-inch medium-action Phenix M1 rod, Daiwa Ballistic LT reel and 15-pound-test Yo-Zuri SuperBraid and an 8-pound-test Yo-Zuri TopKnot Fluorocarbon leader 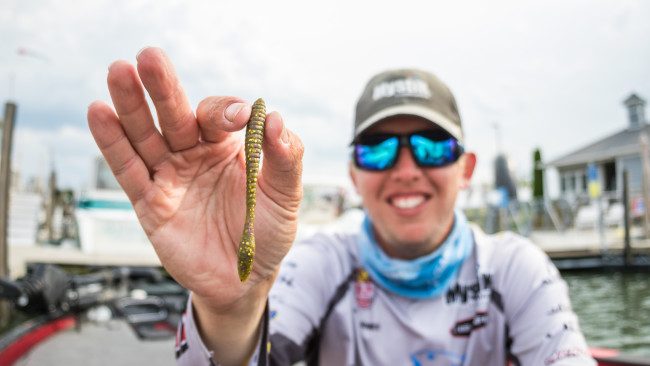 6. Another who toughed out the rides to St. Clair, Alton Jones Jr. did his damage with a Berkley PowerBait MaxScent Flat Worm in the goby color, which he feels was key to set him apart from all the green-pumpkin Flat Worms the bass were seeing.  The bait was so key for him that he threaded it on a 1/0 hook so he could catch more fish per worm, as he only had four bags. He used a 3/8- and 1/4-ounce weight and threw it on a 7-foot, 1-inch medium-action Kistler Helium III rod with 15-pound-test Seaguar Smackdown braid to an 8-pound-test fluorocarbon leader. 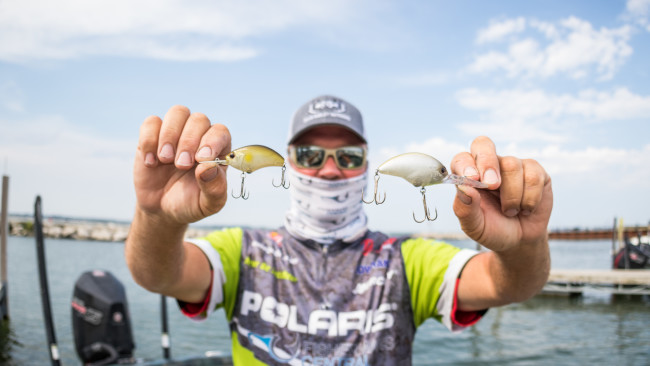 7. David Dudley just wanted to fish for largemouth in Sandusky Bay to try. for a check Instead, he junk fished his way to a top 10 by “‘fishing what comes in front of you.” While he mixed up a ton of baits to fish grass, rock and docks, he caught the majority of his fish on OSP Blitz MR (vanilla chartreuse) and OSP Blitz Max DR (tasty shad) crankbaits, which he threw on 7-foot, 2-inch Profishiency rods and Abu Garcia Revo reels spooled with 14-pound-test Gamma Edge line. He also tossed a drop-shot with a 7-foot, 2-inch Profishiency spinning rod and 8-pound-test line. 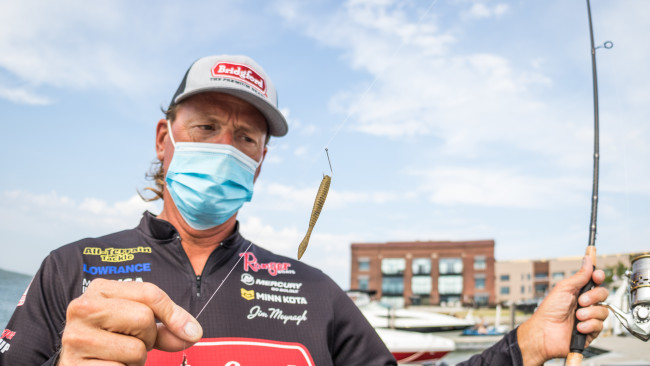 8. Jim Moynagh barely caught enough fish each day to get a limit while fishing some shoals up near the Canadian border on Erie, but he did his damage each day pitching a Berkley PowerBait MaxScent Flat Worm (green pumpkin) on a drop-shot with a ½-ounce weight to fish he saw on his electronics. 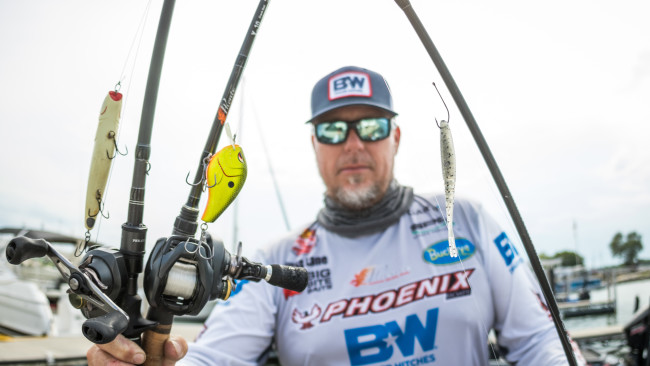 9. Russ Lane may have been the lone pro to intentionally try to catch a mixed bag of largemouth and smallmouth, and he did it mostly in the Detroit River. For smallmouth, Lane alternated between a SPRO Fat Papa 55 crankbait and a Big Bite Baits Smallie Smasher on a drop-shot. He threw the crankbait on Phenix X-Series composite cranking rod with a Shimano Curado 200K reel spooled with 12-pound-test Sunline Super FC Sniper fluorocarbon. On the drop-shot, he went with 16-pound-test Sunline SX1 braid to a 6-pound-test Sunline Shooter leader launched with a Phenix spinning rod and Shimano Stradic reel. For largemouth, he flipped a Big Bite Baits YoDaddy (green pumpkin) on a 4/0 Gamakatsu hook behind a 1 ½-ounce Hawg Tech weight. He flipped with a Phenix Recon Elite rod and 60-pound-test Sunline FX2 braid. With the wind being too much the final day, Lane figured he’d hang tight in Sandusky Bay, where he “had a blast” tossing the squarebill and a new SPRO topwater called the Papa Glider. 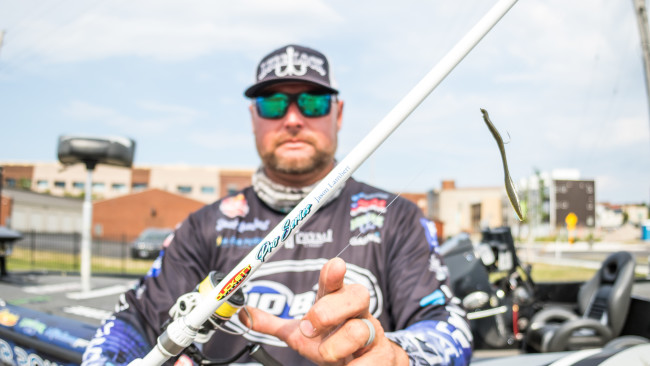 10. While most pros headed north or west from takeoff, Jason Lambert had some places 35 miles east to focus his attention. Like most everyone else, Lambert was “all about a drop-shot” this week. He says he used a BioBait Leech on a Kitana Neko hook with a 3/8-ounce weight. He threw it on a 7-foot, 2-inch Duckett Jason Lambert Pro Series rod and Duckett Paradigm SWX spinning reel spooled up with 20-pound-test Yo-Zuri SuperBraid to either a 6- or 8-pound-test Yo-Zuri TopKnot Fluorocarbon leader.