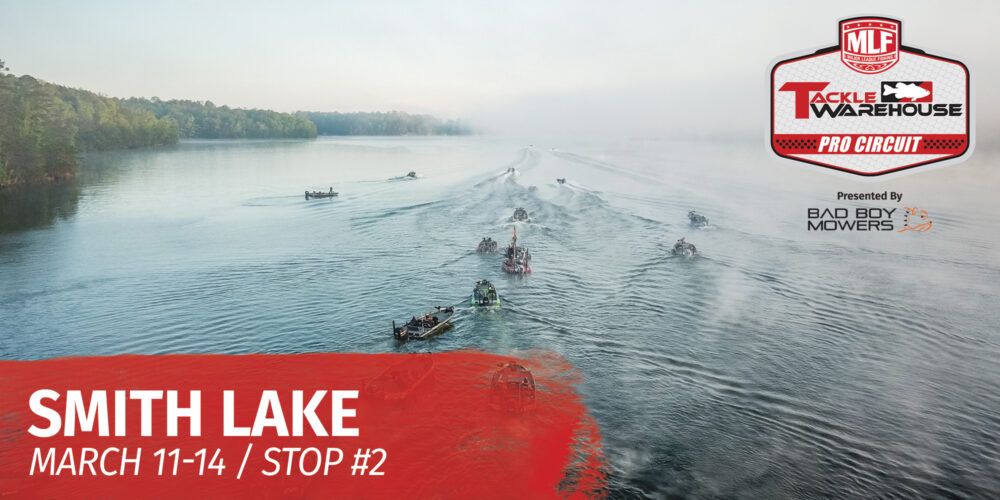 The Tackle Warehouse Pro Circuit presented by Bad Boy Mowers season will head to Lewis Smith Lake in Alabama for Covercraft Stop 2. Since the event is taking place earlier than most of the visits to Smith, a full-blown prespawn showdown could be in order.

Lewis Smith Lake, or Smith Lake as it’s generally called, is a 21,000-acre impoundment nestled in northern Alabama and fed by the Black Warrior River. As far as Tackle Warehouse Pro Circuit fisheries go, it’s a relatively small lake, but because it’s lined with hundreds of pockets and a few creek arms, the lake fishes big. Smith is a highland-type reservoir, meaning it’s deep and clear with rock and wood being the primary cover. There are docks on the lake, though limited in number. Both spotted bass and largemouth reach impressive sizes in Smith, though spots are the predominant species. That being said, a chunky largemouth or two can make a big difference in the final standings.

Most recently, the Bass Pro Tour hit Smith back in late April of 2019, where Dean Rojas would take the win, and anglers could do a bit of everything from flipping bushes to finessing out deep.

David Williams took advantage of the shad spawn happening around docks on Smith back when the FLW Tour stopped there in April of 2018. He’d bring home the hardware with 64 pounds, 9 ounces. Being the event took place towards the end of April, there were still some fish spawning, though the rest were mostly done and feeding back up.

Before that, Dave Lefebre won at the end of March targeting fish chasing blueback herring with a wakebait to sack up 65-5. It was certainly the most unique technique to win in recent years, but the majority of the Top 10 stuck to either flipping shallow cover for largemouth or swimbaits and shaky heads for spotted bass on the main lake.

The main thing to expect from this event is plenty of prespawn butterball spots and largemouth put on the scale. Smith is a lake that always shows out when it comes to fish being caught, but given the early-March timing of the event you can bet both size and numbers should go up.

Weather will be a factor like it is in most spring events because if things warm up there could be some early fish on beds, which would probably make guys like Ron Nelson and John Cox very happy. Otherwise, expect to see most of the pros running the myriad of points and pockets Smith has to offer in search of herds of spotted bass and the occasional largemouth. The main largemouth focus will likely be in the backs of pockets with any docks or wood and bushes in them.

Even with an earlier timeframe, the event shouldn’t be much different than those we’ve had before where pros can fish their strengths. Jerkbaits, shaky heads and swimbaits will be go-tos for spotted bass around main-lake points. For those that favor largemouth, the backs of pockets will be a prime place to flip a jig, roll a spinnerbait or ChatterBait and toss a crankbait.

Probably the biggest thing to keep an eye on for this event is how big of a factor forward-facing sonar could be. Since the introduction of blueback herring to Smith there are spotted bass and largemouth that have become nomadic nearly year round in their quest to hunt down the tasty herring. Though Lefebre tapped into the pattern in his win on Smith, we still haven’t seen anyone completely solve the puzzle on how to target these fish.

However, with forward-facing sonar mounted on more boats in 2021 and dozens of anglers more than capable at employing it, this tournament could very well be won thanks to this technology. While the odds of the tournament being dominated by pros scanning open water for suspended fish are probably low, the likelihood that it factors into some key fish throughout the event are quite good. Kicker bites on Smith go a long way and being able to catch some 4- and 5-pound spots – or even bigger largemouth – each day of competition would be clutch and help showcase a side of Smith we have yet to see.