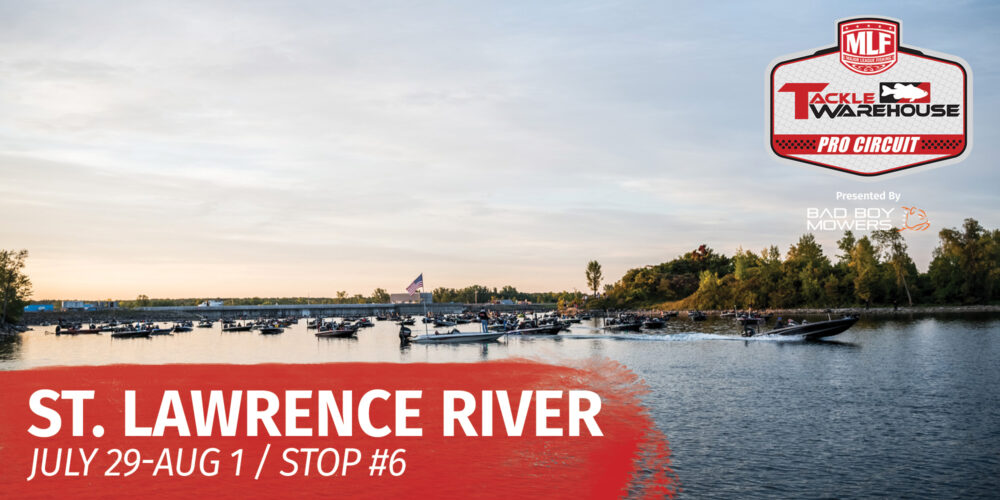 The regular-season will conclude on one of the best smallmouth fisheries in the world.
July 25, 2021 • Jody White • Tackle Warehouse Pro Circuit

The final stop of the 2021 Tackle Warehouse Pro Circuit presented by Bad Boy Mowers is the St. Lawrence River. Draining the Great Lakes into the Atlantic Ocean, the St. Lawrence is one of the best smallmouth fisheries in the world and a top-notch largemouth fishery as well. Savage Arms Stop 6 is presented by Abu Garcia and as far as a stage to wrap up the Angler of the Year race and the regular season, you really can’t do better or prettier than the St. Lawrence.

The St. Lawrence River has been hit hard by major events the last few years, but this will actually be the first time the Pro Circuit or the FLW Tour has ever been there. On the one hand, it’s a shame it’s the first time because the fishery is off-the-wall awesome. On the other hand, there’s no time like the present.

Taking out of Massena, the anglers will have the run of the river, but won’t be allowed to lock downstream into Lake St. Francis or run out into Lake Ontario proper. With the lake truly out of play, it puts the focus on the river itself, which isn’t a bad thing to hone in on. The river has almost everything you could ask for in a northern fishery. There’s grass both deep and shallow, docks, tons of rock piles and current seams, sand flats, boulders and more. The focus of the event will be smallmouths, though a pile of green fish can be caught on the St. Lawrence, it’s not usually the route to a winning bag, as the river has a simply stupendous number of 4- and 5-pound smallmouth.

With no Pro Circuit history on the St. Lawrence and the recent Bass Pro Tour event being almost entirely a spawn event, the best source of data is the Bassmaster Elite Series and Toyota Series. In 2020, Chris Johnston won an Elite Series event in July by running out to Ontario. In 2019, in a river-only event in August, Micah Frazier edged out Johnston with a Ned rig fished deep in the river, while Johnston targeted shallow smallmouths.

On the Toyota Series side, we’ve seen the river itself win even when the lake is in play, though that was thanks to Scott Dobson, and he’s a bit of an exception when it comes to smallmouth. In 2019, the Toyota Series took off out of Massena, and Wayne Vaughn fished deep in the river to win, but Dobson almost won shallow by running nearly to the lake.

Expect big smallmouths. Winning weights in river-only events on the St. Lawrence have been over 90 pounds in the past, and it’s not out of the question that it happens again. Though challenging the century mark solely in the river is perhaps unlikely, the smallmouth fishing will be great.

Ned rigs and drop-shots will be the main players for deep fish. Dragging and drifting for deep smallmouths on the bottom in the river is a mainstay and come summer it’s very often the best way to get it done.

The shallow side is where the real variety comes into play. There, you’ve got all sorts of options like spy baits, swimbaits, jerkbaits, hair jigs, drop-shots and even topwaters.

As far as anyone trying to pursue a largemouth bite goes, look for a frog and Texas rig to make an appearance.

What to Watch for

From a fun perspective, a shallow tournament is what you want to hope for. Watching pros like Dobson or Ron Nelson pick apart shallow smallmouths is enthralling, and absolutely incredible live footage. If it does turn out to be a dragging event, that’s not bad – you can’t really complain about 5-pound smallmouths, but there are likely to be fewer breathtaking jumps at long range.

You’re also going to want to watch the Angler of the Year race. Having the final event of the season on a smallmouth fishery makes it extra interesting, and the close weights inherent to northern events mean every ounce will count.