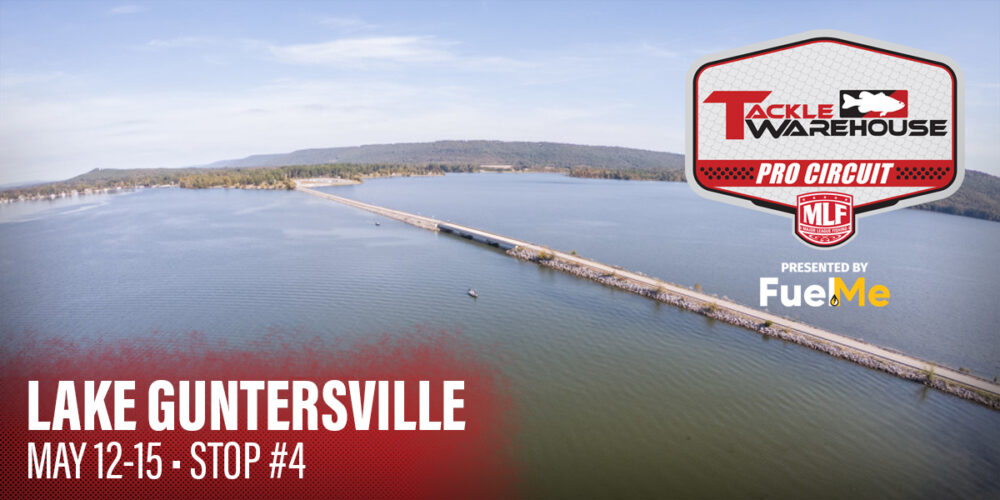 Back in the day, there were some epic offshore beatdowns in FLW Tour events on the Tennessee River. This year, the Tennessee River swing takes place early in the season, with the Tackle Warehouse Pro Circuit Presented by Fuel Me hitting Pickwick and Guntersville before the summer truly arrives. For B&W Trailer Hitches Stop 4 Presented by A.R.E., the pros will take on Guntersville with a mix of late spring conditions in play.

One of the most famous lakes on the Tennessee River, Guntersville Lake is located in north Alabama between Bridgeport and Guntersville. It is Alabama’s largest lake, stretching 75 miles long and covering 69,100 acres. There are some hot upstart lakes across the country, but for decades Guntersville has been considered one of the best largemouth lakes in the U.S.

However, the lake has evolved over the years and most anglers say it’s a very different fishery now than it was 10 years ago. The biggest change has been the proliferation of eelgrass in the lake, choking out or replacing the massive milfoil and hydrilla beds the lake was once known for.

Beyond the grass, Guntersville has docks, ledges, some very notable causeways and all sorts of cover. For bait, G-Ville is loaded with shad, skipjack, bream and about anything else southern bass would like to eat.

Back in May of 2012, Alex Davis hammered out 81 pounds, 12 ounces over three days to win an EverStart Series event that was an offshore slugfest of epic proportions. Sadly, the lake isn’t the same these days, and Davis doesn’t expect a ledge shootout to play out.

As a guide and an interested party, Davis keeps a close tab on the lake and figures last year’s Bassmaster Elite Series event might be a better indication of what’s to come.

“Last year, the same week, the Elite Series was here. Caleb Kuphall won punching mats, Jason Christie did real well on a frog, and he was fishing for spawners and fry guarders. A lot of people caught their biggest ones off the bed,” says Davis. “Brandon Palaniuk caught them offshore deep – he had a decent tournament, but he struggled the entire time to do that – he didn’t whack nothin’. Scott Martin literally had one good day deep, and that was with the help of a 6-something.”

Still, Davis thinks that the lake delivering an offshore bite in May isn’t totally a thing of the past. It’s more a circumstance of the weather.

“Last year, they were mostly shallow, with a few deep,” he says. “The offshore bite didn’t happen until August, they just weren’t out there. Since (2012), I’ve never seen as good of an offshore bite. And, we’re having later spawns. They’re spawning the last week of April. Used to be, you could always throw a Senko the first week of April. For like three years now, it’s been cold during turkey season.”

With a population of bass that’s a bit down and tons of eelgrass in the lake to spread fish out, Davis says that you can no longer expect cast-after-cast action. That means hunting up shallow with a swim jig, topwater or wacky worm will be huge.

“You’re going to see a lot of people spread out, you’re not going to see people on top of each other,” Davis said. “Then, there will be those few offshore places guys will fight over, and I don’t know if they’re worth fighting over anymore. Used to be, you would not leave because you’d be scared someone would get there and crush them. Seems like you go there now, and you catch 14 pounds all day long.”

The beautiful thing about a shallow Tennessee River event is how much it can broaden the range of techniques in play.

“You’re gonna see ‘em get caught in every manner known to man,” says Davis. “Soft plastics, Baby Brush Hogs, Senko-style baits, swimming worms. You’re gonna see fish get caught on topwaters, frogs, there’s gonna be people punching a big weight. For the guy that wants to commit, you could catch them on a big swimbait.

“If there’s a shad spawn, you’ve got ChatterBait and square-bill action. Out deep, you’ll see fish caught on football heads, big crankbaits and drop-shots,” Davis said. “It’ll be the most random tournament we’ll have all year. A lot of times at the end of a tournament it’ll be everyone doing the same thing. This one, there will be five different patterns in the Top 10.”

With about half the bass pros in the country living within a few hours of G-Ville, there are a ton of possible choices at this event. Looking at pros with shallow prowess and an Alabama address, folks like Justin Lucas, Alex Davis, Randy Howell (he’s won some money on Guntersville before), Blake Hall, and Jacob Wall stand out.

If you’re thinking shallow generally, then John Cox is usually unstoppable on the Tennessee River, Bobby Lane has been hot as a pistol lately, and Randall Tharp is clutch shallow and got his start on Guntersville.

Beyond that, you’ve got guys like Skeet Reese, Michael Neal, Jimmy Washam, Brad Knight and more who all have histories of success on Guntersville. Rest assured, you’re going to have a great option for just about any style of team building.