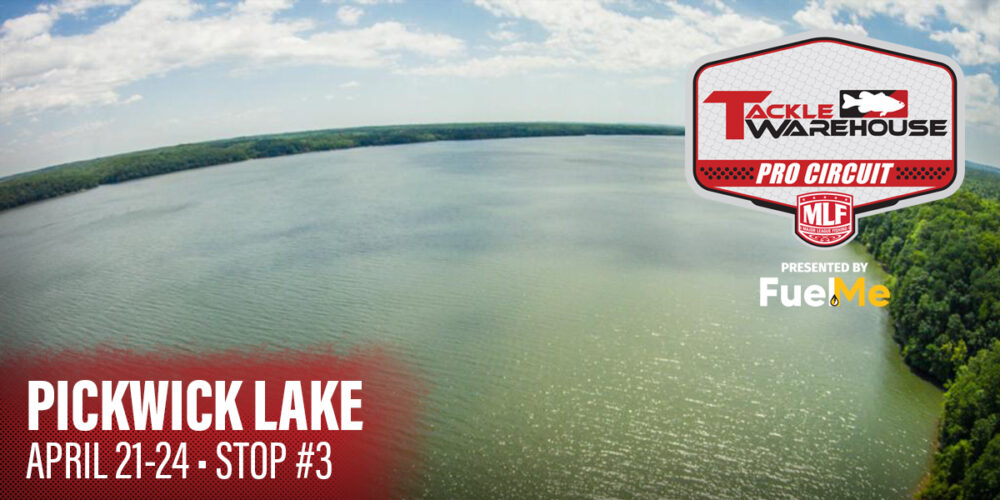 The first of two back-to-back stops on the famed Tennessee River, Pickwick Lake should offer a fresh look to MLF fans who became accustomed to summertime, ledge tournaments on the impoundment. Taking place at the end of April can mean the fishing can be off-the-charts with fish in nearly every stage of the spawn, however, it can also be a volatile time when it comes to weather and floods. Regardless, much of the field will be seeing the lake in the spring with fresh eyes and with patterns aplenty, this should shape up to be one heck of a show.

One of the best Tennessee River impoundments, Pickwick runs northwest through Alabama and a bit of Mississippi, with the lower end and dam in Tennessee. One interesting dynamic for this event is the fact the tournament takes out of Counce, Tennessee, as opposed to Florence, Alabama, which is a semi-fresh take for MLF events. Because of that, it gives anglers a new angle on the lake, especially when you consider the Wilson Dam is about a 48-mile run from takeoff. It’s not a crazy run, but it could force anglers to explore the lower reaches of the lake a bit more. For instance, Bay Springs Lake where Mark Rose won the 2009 Stren Series Championship and is an easy 38 miles from takeoff down the Tennessee-Tombigbee Waterway.

As far as the playing field as a whole is concerned, there’s no bad stretch of the lake, but it does have a few distinct sections. The upper end of the lake, near the Wilson Dam, is known for a lot of current and excellent smallmouth fishing. Down the lake, some really exceptional ledges come into play, and, depending on the timing, there is a lot of shallow action on shallower bars, grass and even flooded cover.

Late April on the Tennessee River means there should be no shortage of options for pros to catch fish and it wouldn’t be shocking to see the Top 10 spread out from the Wilson Dam down to the Pickwick Dam.

“That time of year, unless we have weather that has the spawn exceptionally early or late, is going to be literally everything,” says Washam. “There’ll be guys catching them 25-foot deep already pulled out to the ledges. There’ll be guys catching prespawn fish and there will be guys sight-fishing. I think it’ll be more of a spawn, postspawn tournament if the year is normal, but either way, there will be a lot going on.”

While options should abound, Washam also knows that weather can influence the system a lot and notes it’s hard to pin down specifics of what could happen weeks in advance.

“It could even be an early shad spawn slugfest or it could be real fickle when those fish will get in a funk like they do around that time of year after doing their yearly ritual,” he said. “But there will be guys consistently catching fish doing everything.”

Despite a lot of the lake in play, one of the main focuses will be on shallow, flooded cover up around the Seven Mile Island area if the conditions are right.

“If we have some spring rains that pull the lake up we’ll have a lot of guys make the run up the lake to get to a lot more of that flooded stuff,” Washam said. “It’s been less of a grass deal lately and it’s not usually until May in the postspawn period where you see grass actually play.

“I think because the fish will be scattered, whoever wins this is going to have to not lock in on one phase (of the spawn) and adapt each day and pick up some fish outside of the norm.”

This tournament should see it all when it comes to ways to catch a bass. For shallow fish, a Texas rig or jig flipped to docks, wood and vegetation should lead the charge. Naturally, a vibrating jig will also be a factor as well. A drop-shot, floating worm or Senko-style bait should help wrangle any spawners or fry guarders.

Swimbaits, both soft plastic and hard, could also account for some good bags of fish, whether they’re thrown around shallow bars or below the Wilson Dam.

For any early postspawn or late prespawn fish there’s no doubt the usual suspects on a Tennessee River ledge will be out in full force – crankbaits, hair jigs, Neko rigs, spoons and football jigs to name a few.

Spring on the Tennessee River should mean John Cox is a high priority. Then again, it’s the Tennessee River, so Washam, Michael Neal, Mark Rose, Wesley Strader, Brad Knight, Alex Davis, any of the Lanes, either Neece, Terry Bolton and Miles Burghoff are good options as well. There are obviously some names missing from the list, but you get the idea.

Oh, and if there’s looking to be a good shallow bite, or a good spawn, then Ron Nelson, Justin Lucas, David Walker, Randall Tharp, Clabion Johns, and Jamie Horton are your guys.