Abram Rises to the Top on Eufaula 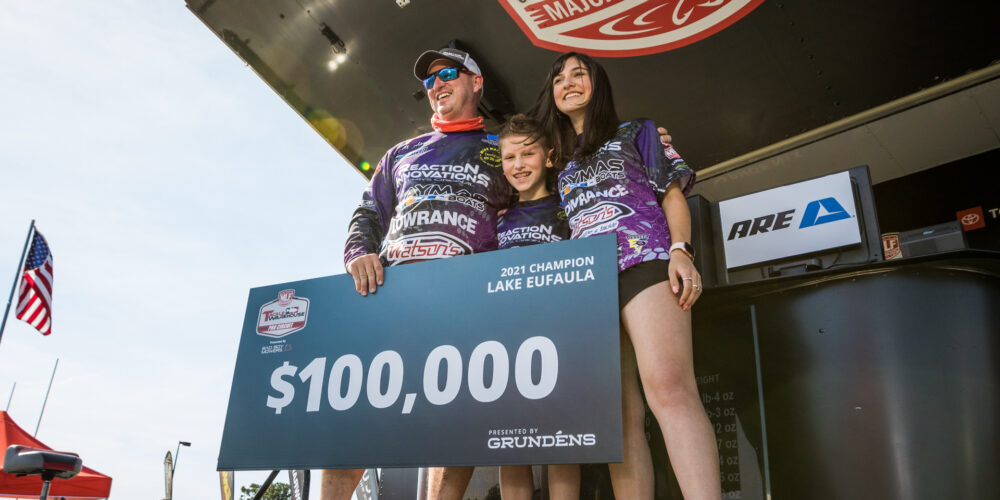 Jason Abram came to the fourth stop of the Tackle Warehouse Pro Circuit Presented by Bad Boy Mowers looking to get his season back on track. His last two finishes were sub-hundred endings at Lewis Smith and Lake Murray and he badly needed to right the ship. Coming into Lake Eufaula, his plan was to fish shallow. He did not think the tournament would be won shallow, he just wanted to fish shallow to get back to his fishing roots: an East Tennessee run-and-gun approach. Four days later, Abram stood on the Big 5 stage on the shores of Eufaula holding his second Pro Circuit trophy and a check for over $100,000.

“Over the last two tournaments, I sort of got side-tracked trying to fish deep,” Abram says. “I came here with the intention of fishing shallow to get a decent check, get some solid points and find my groove again.”

Abram found his groove all right, fishing up in the Chattahoochee River portion of Eufaula. The river reminded him of some of his lakes back home, specifically Watts Bar reservoir.

“When the shad spawn comes in at Watts Bar, we catch them by pitching a heavy white jig to bluffs formed by channel swings,” he explains. “The bluffs have cracks and crevices that create creases, seams and eddies in the current. The bass set up in those ambush points and eat shad washing in with the current.”

When Abram says “heavy,” he means a jig that is heavier than a typical shad spawn swim jig, which usually run in the ¼- or 3/8-ounce size. His jig of choice back home is a white 5/8-ounce model, handmade by a friend named Craig France. The design features a flatter head to “float” in current a little better. He trails the jig with a Reaction Innovations Spicy Beaver.

“At home, those typical lighter jigs wash too much with the current,” he says. “But too heavy of a jig does not hesitate in the current long enough for the fish to hone in on it and eat it. That’s why 5/8-ounce with the wider head is perfect for that technique.”

Abram used that exact same jig to fish channel swings banks in the Chattahoochee River this week. He found enough similarity between Watts Bar and Eufaula to make his homegrown pattern work. The perfect combinations at Eufaula were channel swing banks that had some kind of wood providing shade over an eddy in the current; either in the form of an overhang tree or a piece of dead wood collecting flotsam to form a canopy over the eddy.

Abram would pitch the jig into the shaded eddy and sort of pop it through the current seam allowing the current to suck it down about 2 feet between pops. His unique retrieve provoked a reaction response from bass set up in the eddy to feed on current driven shad.

The biggest problem Abram had was finding enough of these unique current breaks to fish in a day. To solve that problem, he put his Mercury motor to use.

“I could only find about 18 or 19 small spots that fit the pattern,” Abram adds. “And they were spread out in about an 18-mile stretch of the river so I did a lot of running and gunning. It’s how I fish back home: once I know exactly what I’m looking for, I’ll run 20 miles to find a few more of them.”

Abram spent as much time running as he did fishing. He would often fish a place only three to five minutes before running to the next sweet shade spot.

“Those fish were set up to feed in those spots,” he says. “They usually bit on the first flip or two into a current seam so it didn’t take long to fish one. And I would visit some of the same spots sometimes four to five times a day.”

Abram weighed in 20 pounds, 3 ounces on day one to start the event in second place. His shady sweet spots continued to produce the next two days to the tune of 13-5 and 18-11, holding him in second place. He started Championship Sunday 1-11 behind Trevor Fitzgerald who seemed to be in control of the board with his brush pile game.

Today, Abram squeezed out another solid limit of 14-1 from his unique pattern to win with a four-day total of 66-4.

“In my wildest dreams I never thought I could win a tournament on Eufaula in mid-May fishing shallow,” Abrams says. “This lake is known for deep ledges and brush piles this time of year. But I came here to do my thing and fish the way I like to fish and it turned into a win – that’s pretty special.”