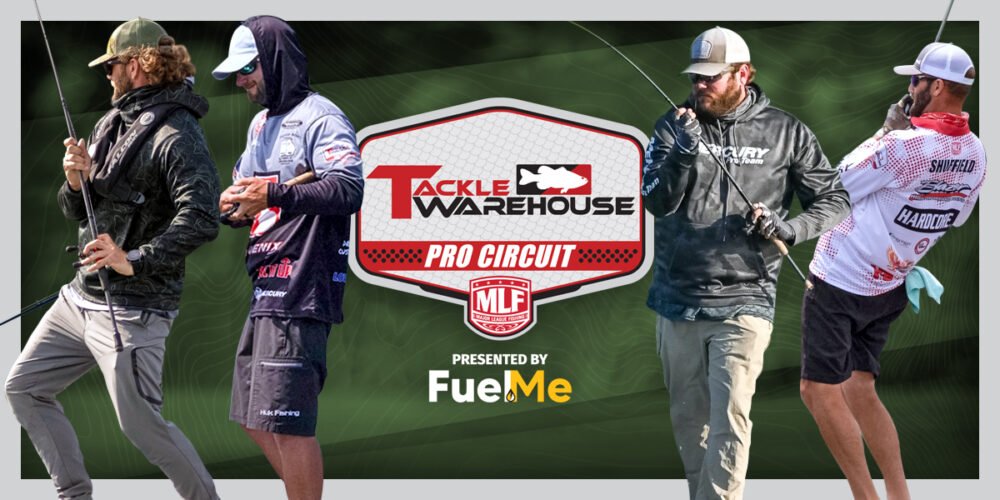 The third and fourth events of the Tackle Warehouse Pro Circuit Presented by Fuel Me schedule were perhaps the most predictable, and they didn’t turn out too different from what folks expected. In both Tennessee River events, southeastern sticks did well, and local experience played big. Along the way, Spencer Shuffield turned in a Top 40 and a Top 10 to take and hold the Angler of the Year lead. Behind him, some fresh faces lined up good events to get in the hunt.

Here’s how the race looks after the conclusion of Stop 4 on Lake Guntersville.

An AOY favorite before the season began, Shuffield has looked great thus far, fishing up to his 2020 form and really not faltering the first two days of any event. A bad final day at Lake Guntersville cost him a career-defining win, but his goals of an AOY title and Bass Pro Tour qualification are still ahead of him.

“I love fishing shallow, don’t get me wrong,” he said. “I just always tend to find myself out deep, because those are the easier fish to catch and it seems like where the better quality lives. Going to a place like the James, it almost makes it easier, because they don’t go offshore much at all and I know I’m going to be shallow the entire time and be able to lock into that right off the bat.”

After the James, the season finale at Champlain should be all he could dream of. An expert smallmouth angler and great off the bank, Shuffield shouldn’t have too much trouble closing the season on a high note with brown bombers plucked from the north end of one of the best lakes in the country. Still, he isn’t clearing a spot on the mantle yet.

“I wouldn’t feel very safe unless I had a 100-point lead, honestly,” Shuffield said. “At the end of the day, I can’t worry about who’s behind me. I know what I need to do, I need to finish out with a Top 20 average to win it. A lot of the guys behind me are new guys, not necessarily new to the tour, but guys that are coming into themselves as fishermen and figuring out who they are, and they’re on their game this year.”

While the ascendance of Shuffield was expected, even Josh Butler didn’t think he’d be sitting second in AOY points going into the back half of the season. A sophomore pro just a few years removed from crushing it at the BFL level, Butler has finished in the Top 20 three times on the season and been able to play to his offshore strengths a lot. Last year, Butler finished 63rd in points and his best finish was a 21st-place showing at Lake Murray, so he did well and succeeded on diverse fisheries, but he didn’t really have a rookie season with a “wow factor.”

“Originally, I planned to try to make the TITLE this year, that was my main goal,” Butler said. “But, I’m not gonna lie, goals change. Obviously, if I qualify for the BPT, I’m probably going to go fish it, and the No. 1 goal now is to win AOY. But, I’ve definitely got to catch them, because Spencer is on a tear, and a bunch of other guys are too.”

Headed to the James to pre-practice next week, Butler is trying to do everything in his power to take a shot at AOY. With some experience in 2021 that he liked on Champlain, the immediate goal is to do well at the James.

“It feels good, I’m not gonna lie,” Butler said of his position. “I’ve got to take care of business at the next one, I’m going to go up and pre-practice next week. I set some goals throughout everything, and at the end of the day, the goal the first day at the James is to catch five and upgrade.”

At third in points, John Hunter begins the second tier of AOY contention, which, all things considered, looks pretty formidable. Almost regardless of the rest of the season, Hunter is having one of his best years ever on tour. Also a former FLW Tour co-angler of the Year and a product of College Fishing, Hunter has had some hits and misses over the years, but he’s already cashed almost as much as he did in his first full season on the FLW Tour back in 2018, and certainly is fishing as well as he’s ever fished.

With three Top 20 finishes on the year, the only thing really holding Hunter back from the outright lead is a 68th place showing at the Harris Chain, which has historically been one of his strengths. For the final leg of the schedule, Hunter doesn’t have a huge success to fall back on, but he does have experience. Having fished a number of Bassmaster Opens at the James and plenty of times in all sorts of competition at Champlain, the Kentucky angler won’t be going into the homestretch cold.

Getting back in the race thanks to a Top 10 at Guntersville, reigning AOY Michael Neal has a chance at several accomplishments. The first is a shot at back-to-back titles, which is obviously a very difficult task. Additionally, he’d also be the first pro since Denny Brauer in 1998 to win an FLW Tour or Pro Circuit AOY with a finish below 100th on the season, thanks to his bomb at Pickwick a few weeks ago.

“I can’t believe I went from 14th to fourth,” Neal said. “I think I’d have to Top 10 the next two to have a shot. It definitely could happen, but I don’t think the chances are very good that (Shuffield) stumbles that far. But, it’s definitely possible, anybody can have a tournament like I did at Pickwick and have everything go wrong. The James River is a place that anybody, including myself, could have a bad tournament pretty easy, it’s not hard to screw up on those tidal waters.”

If Neal wins, his back-to-back titles will go down in history, but it’s not likely to be the most high-flying race of all-time. Back in 2014 when Cody Meyer and Andy Morgan dueled for AOY on the FLW Tour, Meyer’s worst finish was 27th and Morgan’s was 21st. Between them, the pair had eight Top 15 finishes in a six-event season. Right now, Neal could win the next two events and Shuffield could likely still pull off the title with a couple of Top 20 showings.

One of the most interesting parts of this year’s AOY race as the finish line approaches is the potential for some really strong runs from anglers slightly down in the standings. Separated by seven points, Matt Becker, Jacopo Gallelli, Justin Lucas and Rusty Salewske all have both tidal success and smallmouth or Champlain success to their name. Becker basically makes the Top 10 in every Toyota Series Northern Division event. Gallelli won at the Potomac in 2021 and made a Top 10 in the BPT event at Champlain. Lucas has won a Bassmaster Elite Series event at the Potomac and smallmouth basically jump in his boat. The elder of the bunch, Salewske has won both the TITLE on Sturgeon Bay and an FLW Series Western Division event on the Cal Delta.

All of the above are a little too far back to really count on from an AOY perspective, but one or more of them could certainly go on a run and make things interesting.

Top 10 in the Standings After Guntersville