AOY Update: The Race Is Tighter Than Ever After Eufaula 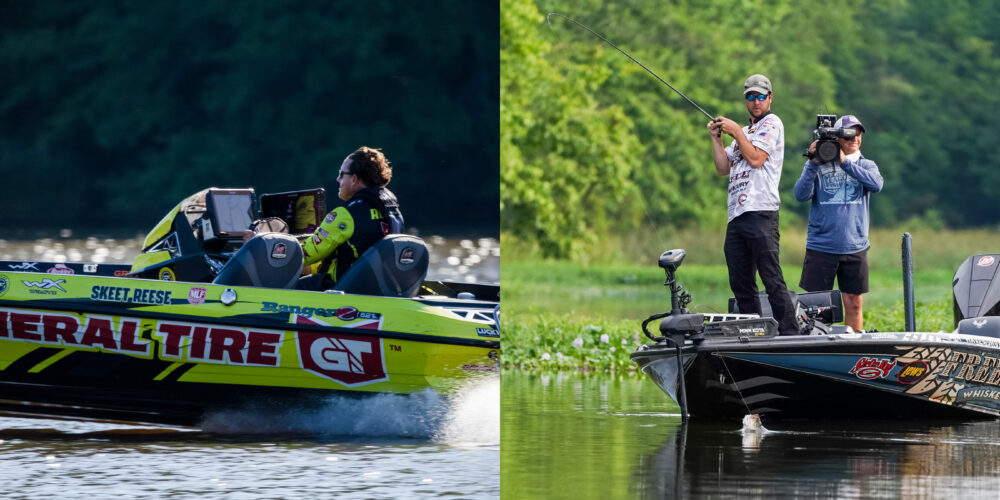 The Angler of the Year race in the Tackle Warehouse Pro Circuit Presented by Bad Boy Mowers is shaping up for a photo finish in 2021. Prior to the fourth stop of the season at Lake Eufaula, Cole Floyd, Anthony Gagliardi and Skeet Reese were stacked at the top of the standings about as tightly as possible, with less than 10 points separating the trio. After finishing 125th at Eufaula, Gagliardi has dropped out of the picture, but the race is still exciting as ever.

Between the top two of Floyd and Reese, the pair only failed to fish the final day at Smith Lake. Otherwise, outside of Reese’s win at Okeechobee, they’ve had nearly parallel seasons. Of course, the similarity between the two stops with the stats. As far as their careers go, the two are polar opposites. Reese has already done it all in bass fishing. The idea that you’d dig into the western stats of his youth to justify him as an angler is wild. Floyd, on the other hand, is still known for his superlative performances in college and his dominance of Kentucky Lake and the Phoenix Bass Fishing League LBL Division in which he won back-to-back-to-back AOY titles.

So, with two events left to decide AOY, here’s a look at how the race is shaping up.

On Day 1 at Eufaula, Floyd put 11 pounds, 8 ounces on the scale and it looked like the AOY dream was over. The next day, the precocious pro walloped 18-8 to save the season, make the first cut and cruise into his third Top 10 of the season.

“The first day I did what I was originally going to do,” says Floyd. “I ran a pattern way up the river. The second day I got on a little something and fished a lot different than I did the first day, and it was something that I really only did for an hour or so in practice.”

Flipping mats on Day 2 kept Floyd in contention, and it proved his versatility again. In 2020, his rookie season, his best finish came offshore on Lake Chickamauga. This year, he’s made a lot of money with a big stick and braid in hand.

Now, the incredibly lowkey angler truly has his eye on AOY.

“It’s a pretty cool deal,” Floyd says of the prospect of winning AOY. “I don’t really think about it a whole lot, but we’ve only got a couple events left, so it’s starting to set in. I’m not going to let it get to me, I’m just going to keep doing what I do and if I catch them, I do and if I don’t, I don’t.”

The four anglers immediately behind Floyd all fish on the Bass Pro Tour and have much more experience than he does, which might be a concern for some, but is just par for the course for Floyd.

“They’ve been doing this for forever, the stuff they know is way beyond me,” says Floyd. “They’re animals, they’re a whole ‘nother level. I’m just going to keep on truckin’, if I slip, I slip, if I don’t, I don’t.”

A hairsbreadth behind Floyd, Reese is fishing better than he’s fished in years and very much within sight of his first AOY title with MLF. However, due to the scheduling, Reese may not pursue the title as much as he would have earlier in his career.

“My daughter’s senior trip with a couple other families is in Europe and has been planned for a couple of years,” says Reese. “So, we’re going to be gone the whole month of July. Right now, that’s still the plan, to go on the trip and be with the family and travel. I think Cole would like that. But, then again, if I decide at the last minute I want to fly home and fish, I can also do that too.”

If Reese wins AOY, he’d be the fifth pro to win both a Pro Circuit AOY title and a Bassmaster Elite Series AOY title. Still, he says he’s not 100 percent chasing titles.

“There’s no doubt it’s a big accomplishment,” says Reese. “As much as I want the titles and the trophies, that’s why we play the game, I’m at the point in my career where it doesn’t make or break my career. As much as I want the Angler of the Year title, to me, that’s the most treasured title in fishing, I’ll have to play it by ear.”

Reese’s season is a redemption story of sorts either way. Even if he doesn’t win or chase AOY all the way, he’s still made a big personal comeback.

“I think I’m in a better mental space now than I have been in a while,” says Reese. “I wasn’t realizing I was struggling for several years. But, getting some therapy and getting help, and realizing there’s a lot more to life than worrying about [stuff] has helped. So, this year I’ve been able to come out and fish in a free frame of mind and fish the way I fish.”

Not in the ultra-tight top two, Michael Neal is nonetheless very much in contention for his first AOY title. With only one Top 10 so far, Neal has still never missed a Day 3 cut this year and is fishing just like he never left the FLW Tour.

Back when Neal fished the FLW Tour, he nearly always did well, and though he didn’t truly contend for an AOY title, the idea that he someday might wasn’t far-fetched at all. From 2013 to 2018, the soft-spoken Tennessean finished 20th or better in the standings five times, making at least one Top 10 every year.

Looking ahead, Neal has made a Top 10 on the Potomac before, and pretty much always done decently when smallmouths are on the menu. Though his wheelhouse is offshore and ledges, he’s held up fine thus far, and there’s no reason to think he’ll give Floyd and Reese any slack when June rolls around.

Hotter than a two-dollar pistol, Bobby Lane is looking dangerous right now. Currently leading the points race on the Bass Pro Tour, Lane has finished in the top 30 in each event on the Pro Circuit and is coming off a Top 10 at Eufaula.

The scary part for his competition is what comes next – Lane is simply superlative on the Potomac. In 2009 and 2007, he won Toyota Series events on the Potomac. He also finished third there in a 2007 Pro Circuit event. Lest you think he just hit a good stretch on a particular fishery, Lane has additional tidal success to his name, like an eighth-place finish in the Toyota Series Championship on the Mobile Delta in 2008.

As a side note, Lane finished ninth the last time he fished an Elite Series event at the St. Lawrence. So, it’s probably not wise to count him out for AOY.

In fifth place, Chris Lane is 70 points off the pace – it’s not an impossible comeback, but he’d need some things to break right with just two events left. Similarly, Jeremy Lawyer, Jim Tutt and Justin Lucas are in the ballpark, but not currently in the race. Lucas is probably the most interesting prospect among the hunters, simply because his strengths mesh so perfectly with the remaining schedule. A former winner on the Potomac and a smallmouth savant, Lucas ripping off a pair of Top-10 finishes to wrap up the season seems pretty doable. While that might not be enough to win AOY, it would likely get some hearts racing in the weigh-in line at the St. Lawrence.