AOY UPDATE: The Second Half of the Tackle Warehouse Pro Circuit Season Is Gonna Be Lit 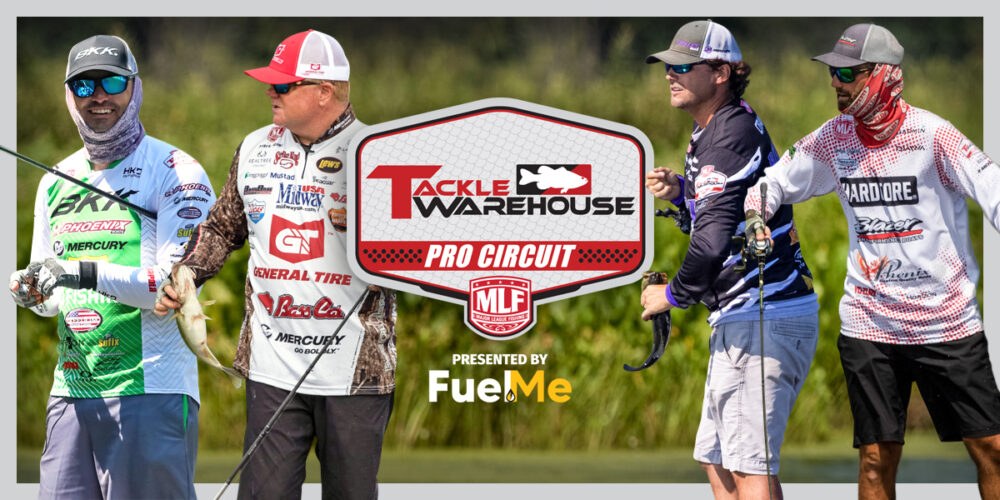 Heading into the third Tackle Warehouse Pro Circuit Presented by Fuel Me event of the year, some folks were ready to crown Michael Neal king again. After all, with back-to-back events on the Tennessee River and an already sizable Angler of the Year lead, he was certainly in the pole position. Then, Day 2 happened, and Neal checked in with one bass and finished the Pickwick event in 105th place, which was his first triple-digit finish with MLF since August 2020.

Generally, it’s impossible to win AOY with a triple-digit showing, and the points back that up. Now, with three events left, Neal is in 14th place, 51 points behind Spencer Shuffield, who has taken the top spot for the second half of the season.

Since he returned to the Pro Circuit in 2020, the Arkansas pro has consistently looked good for Angler of the Year. Finishing second to Ron Nelson back then, he had a good year in 2021 and he appears to be fishing at a truly elite level again in 2022.

Having said he wants it “more than a tournament win,” Shuffield is leading the points for the first time now and in position to make AOY happen. But, he’s got some stiff competition breathing down his neck and a few challenging venues ahead.

Of those to come, the James River could pose the most problems for Shuffield, but it’s really only suspicious because he doesn’t have much history there. At the Potomac, Shuffield has generally done well, and being from Arkansas, he’s got some history on tough flowing fisheries like Dardanelle.

At Guntersville and Champlain, things seem to be set up well in theory. If there are offshore fish at G-Ville, Shuffield can find them. If it’s a shallow bite, he could also be in good shape. Come the north and smallmouth, Shuffield has a sterling record, and is particularly good on places other than the St. Lawrence River. Given the new LiveScope transducer and plenty of drop-shot weights, you can expect he’ll finish the season strong.

The 2018 FLW Tour Angler of the Year, Mark Rose now has his sights set on a second title and a bolstered position on the list of bass-fishing greats. Since finishing 54th to start the season at Sam Rayburn, Rose has ripped off a pair of Top 12 finishes to get into contention.

Like the typical AOY hopeful, you really can’t find a chink in his armor. Maybe not perfectly suited to the James or Champlain, it’s still hard to make a convincing argument that he couldn’t do well. As for Guntersville, it’s generally best to assume that Rose is going to catch ‘em on the Tennessee River come hell or high water.

3. Crane and Gallelli Pace the Upstarts

Behind Shuffield and Rose, the standings don’t really look like you’d expect, with folks like John Cox, Matt Becker and Skeet Reese doing well, but looking up at the leaders. Tied by points in third with 526 apiece, Mitch Crane and Jacopo Gallelli have put their mark on the season already and may do a lot more. The dentist from Mississippi and former nightclub manager from Italy may not have a lot in common outside of bass fishing, but they both bring an exciting element to the Pro Circuit field.

Finishing 28th and 36th in points the last two years, Crane has proven he can hang at the pro level. This year, he started with a 53rd place finish at Rayburn, notched a 21st place showing at the Harris Chain and then finished third at Pickwick. With two events filled with shallow opportunities ahead, it’s not hard to see Crane in contention at the end of the season. That’s where things get a little more dicey. Crane’s record up north has some high notes, and some very low notes. While Champlain could suit him well, he’s never been there before, and smallmouth are not really his forte.

After a win and TITLE qualification in his rookie season last year, Gallelli is looking to keep moving up in the world. In 2022, he started with a 29th at Rayburn, finished 35th in Florida and 13th at Pickwick (after leading Day 1 and 2). With a little experience on the James from B.A.S.S. Opens competition, Gallelli could be in good shape there, and the same can be said for Champlain and Guntersville. Really, based on his past events, the second leg of the season sets up well for the Italian pro, which could make things pretty interesting as the spring and summer wear on.

Others in the Hunt

In the rest of the Top 10 (John Cox is in 11th), there’s a collection of really excellent talent that you can expect big things out of throughout the season. In fifth, Josh Butler is an Alabama hammer who appears poised for a good showing at Guntersville and could carry that momentum forward. In sixth, Kurt Mitchell is maybe one of the most interesting AOY prospects when you consider his skill on tidal waters and his affinity for Champlain. Behind them, you’ve got even more young and exciting talent, with some established pros like John Hunter seemingly putting it all together at the right time.

With the season still fairly young, big moves up the AOY ranks were possible at Pickwick, and six pros moved up 40 spots or more in the standings. Nick Hatfield, Chris Lane, Brad Knight, Nick LeBrun, Ron Nelson and Troy Stokes all rocketed up the leaderboard at Pickwick and some could keep on moving up. Of that group, rookie Hatfield is the highest in the points currently, sitting back in 30th. Perhaps not really in striking distance for the AOY title, but certainly back in the hunt for TITLE qualification and then some.

Top 10 in the Standings After Pickwick