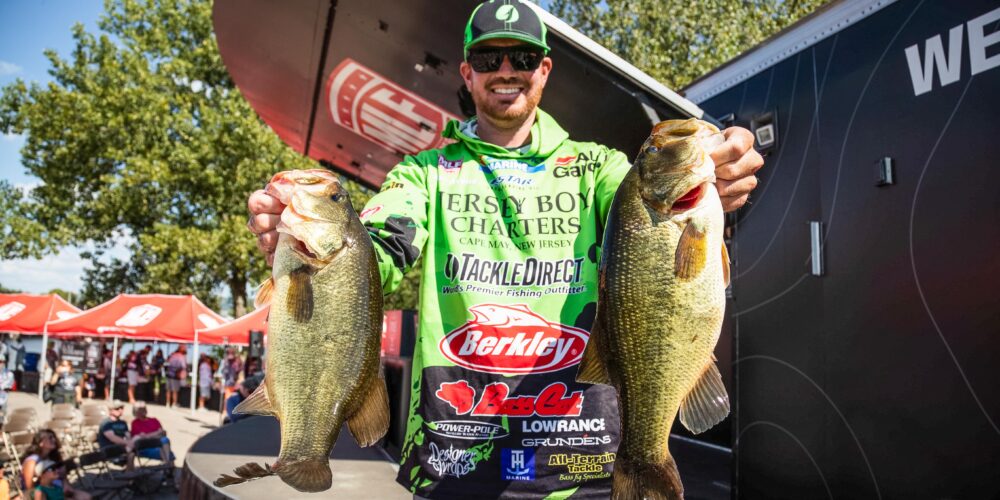 LA CROSSE, Wis. – As stingy as the Upper Mississippi River is fishing right now, Adrian Avena certainly found a way to make it shine on Day 1 of Group B competition in the Qualifying Round of the Tackle Warehouse TITLE Presented by Mercury.

Tallying 15 pounds, 12 ounces,  the New Jersey pro put up the biggest limit of the event so far to take the early lead in Group B. Overall, Group B made the river look good on Day 2, with three pros cracking the 14-pound mark and 10 pros catching more than 12 pounds, a feat which only six pros in Group A managed on Tuesday.

Coming off a bottom-of-the-barrel finish in the Bass Pro Tour event on Lake Champlain, Avena was looking to get revenge on something, and the Mississippi River bass just happened to be in his way. Putting them in the boat early and often, Avena didn’t have to do anything too wild to catch his fish, he just caught ‘em.

“Today was fun, I got in an area that had some bass in it and really, just caught a lot of bass and I was able to catch those better than average fish,” Avena said. “I found it in practice. I had three bites right at the end of practice and they were all better than average. I rolled into that area today, and there were a lot of bass there, it’s just whether or not I’ll be able to fish it again.”

Catching more than 25 keepers on the day, Avena wants to shoot for the win and the automatic berth in the Championship Round.

“I’m gonna try to wind the round, that’s going to be my goal,” Avena said. “I feel like where I’m at, it can only do good with rest. If I can go out there and catch a really good bag and possibly win the round and punch my ticket to the Championship Round that’s what I want to do.”

J-Mac Sticks to His Guns

Putting up 14-15 for second place in Group B, Jared McMillan would have handily lead Group A. Sticking in Pool 8 and going with his strengths, the younger McMillan brother is more than happy with his start.

“After our hour fog delay I was a little worried about what I was going to do, so I decided to stick around Pool 8,” he said. “I stuck to one area all day, doing something I love to do. It was pretty slow. I don’t know what time I got there, but it was about one [fish] every hour. That wasn’t what I was expecting coming into it, but I’m happy with it.”

Grinding out bass in grass is basically the McMillan family mantra, so the Florida pro isn’t fussed about not having much else.

“I think I’m going to stick to one deal and keep it going,” McMillan said. “I don’t have anything else really, we’ll just see how the week goes and go on the fly.”

Like Avena, McMillan is all about winning the group and skipping over the Knockout Round.

“I absolutely want to win the round,” McMillan admitted. “I only have one deal – I need that first bid to make the Championship Round. I’m hammering on them on [Group B] Day 2, I’m not going to leave them biting.”

Pool 7 Pays Out for Crane

Sitting in third in Group B with 14-9, Mitch Crane is fishing how he loves to fish and looking to improve on his success in the 2020 Tackle Warehouse Pro Circuit Super Tournament on the Mississippi.

“It went great,” Crane said of his first day. “I locked up, and I stopped probably 300 yards shy of my first waypoint. The third cast of the day, I caught a 2 ¾, I Power-Poled down, and I never picked them up. I fan cast an area about 20 yards wide, and I caught everything I had right there. I never touched anything else, I come out the lock at 9:50 and I had what I needed by 10:40.”

By far the best of Group B in Pool 7, Crane doesn’t plan on shooting hard to win the group with Avena and McMillan both ahead of him.

“I’m gonna look at the weights and see where I need to be, but I think I’m going to try to get to that 25-pound mark,” Crane said. “The fish must have bit a little better today, I’m kinda surprised at the weights we’re seeing. But, I’m gonna try to get to 25 or 26 pounds and then go practice some. I didn’t get to practice much on Pool 7 today because the locking situation was questionable, but I did catch some in Pool 8 today, so I might be able to get a keeper there in an emergency. But, I’m going to try and conserve them I guess, and hope Adrian or Jared stumble.”

Mississippi born and bred, Crane is comfortable on the river and happy with what he’s doing, which could make him dangerous in later rounds.

Thursday will wrap up the competition for Group A, with the winner headed straight to the Championship Round and the rest of the Top 10 headed to the Knockout Round. In Group A, Mike McClelland, Alex Davis, Cole Floyd and Ryan Salzman all have more than 13 pounds and will be battling each other and the rest of the crew for advancement.