Burghoff Sacks Up 14-13, Earns Berth in TITLE Championship Round 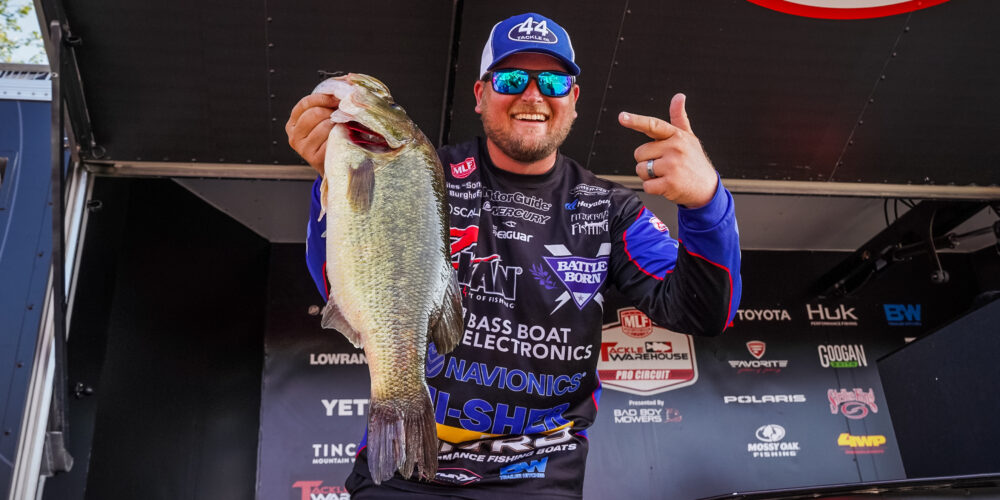 LA CROSSE, Wis. – Miles Burghoff is the first angler to punch his ticket to the Championship Round of the 2021 Tackle Warehouse TITLE Presented by Mercury.

The Tennessee pro brought 14 pounds, 13 ounces of Upper Mississippi River bass to the stage at Veterans Freedom Park in La Crosse on Thursday to push his two-day total to 26-8, giving him a scant 1-ounce win over Oklahoma pro Zack Birge (26-7) for the top spot in Group A. Burghoff receives the group’s automatic berth in Sunday’s Championship Round, where he’ll be joined by the Group B winner and eight other anglers from the Knockout Round.

Locking down to Pool 9 each day of the Qualifying Round, Burghoff knew he was on a good school of largemouth. He expanded on that area during Day 1, so even with a shortened day due to a fog delay, Burghoff was set in his ways to lock back down.

“There was no doubt I was going back down,” Burghoff said of going to Pool 9. “It’s not like that pool is fishing better, I just found a good area. I caught my limit in six casts today. And I culled six or seven times in 30 minutes, but I only had 9 ½ pounds. Then I started searching some areas and caught that one that was almost 6 and left immediately. Never made another cast.”

That 5-11 kicker was the gamer-changer for Burghoff and is the current Berkley Big Bass of the event. Coming into Thursday’s final Qualifying Round for Group A, Burghoff was adamant about trying to avoid big bites, hoping to slide through the Knockout Round with consistent bags. So, even though he was excited to box a Mississippi River giant, he’s also a little upset to pluck a fish that like so early in competition.

“When I said I didn’t want to catch a big one early in the week, that was the truth,” Burghoff said. “But when I did, I wanted to win the round. I worked really hard today and let up on ‘em and gave up an hour that I could have culled up a quarter pound and was really sweating it in the weigh-in line. You can’t burn a fish like that in this format event. So, to be able to secure the ability to not have to go beat up on those fish for another day, oh man.”

With so much at stake, Burghoff is opting to stay tight-lipped about his presentations and pattern, though he did reveal he’s found some new areas that he feels confident will have fish waiting for him come Sunday.

“They’re gonna be there,” Burghoff said. “The biggest thing for me is boat traffic and the lock. Those are the two things that I’m not concerned with, but could affect me. I got plenty of fish in that area. I avoided the good areas today because I had some guys following me around and didn’t want to show that.

“Seeing the size of [the 5-11], seeing some quality and finding new areas really made me excited for the Championship Round. That’s why I wanted to win today and we barely squeaked in there.”

Burghoff is fired up to get back on the water, and understandably so with a shot at a $200,000 payday. For now, he’ll just have to sit tight as Group B takes to the water tomorrow to battle it out for a spot in the Championship Round and nine other slots for the Knockout Round.

Birge Kept His Hat in the Ring

One of the pre-tournament favorites – and for good reason – Zack Birge has been leaning on past history of the Mississippi River for a bid into the Knockout Round.

While he would much rather have won the Qualifying Round, he’s happy with how the week is going so far, especially considering the area that has treated him well in the past is still showing out.

“I don’t think the quality is there like it was,” Birge said of his starting spot down the river from takeoff. “I know they’re somewhere around me, I caught a 3-pounder there this morning and two 2 1/2s. I don’t really know the reason behind it, but last year you could catch 12 pounds off it and then show up and catch 16. But that area holds a lot of fish and I can catch them there most of the time.”

With a solid area that can produce a good base limit, the scary thing for the rest of the competition is that Birge was able to piece together a new pattern today and it quickly produced a big bite.

“I tolled on the down the river some just junk fishing and it clicks,” Birge said of his afternoon. “I lost one more good one today that probably would have helped me a little bit more, but I did it for the last two hours and caught that big one (4-pounder) doing it and caught a dozen small fish and a few other keepers.

“So I’m excited to get back and do it again. And I think it’s in an area that a lot people are overlooking because it’s hard to get to, but it’s just small little cuts with a little bit of current and still close to the main river and a lot of people go right by it.”

Friday will wrap up the competition for Group B, with the winner headed straight to the Championship Round with Burghoff, while the rest of the Top 10 are headed to the Knockout Round. Group B brought the heat on their Day 1, with 10 pros breaking the 12-pound and Mitch Crane, Jared McMillan and Adrian Avena cracking the 14-pound mark. If they can duplicate their first-round success, there should be an awesome Mississippi River battle to watch unfold as Group B fights for their tickets towards the TITLE.