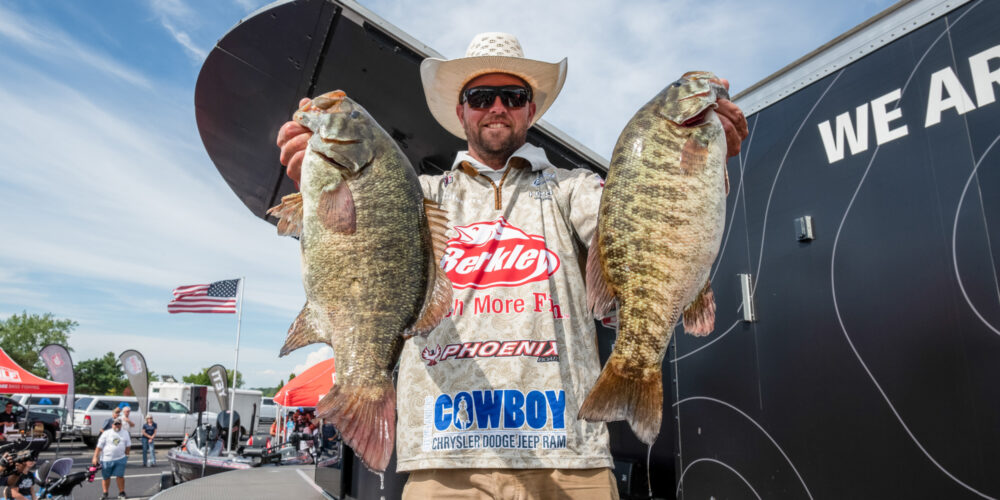 MASSENA, N.Y. – Long runs and giant bags of smallmouth – that’s what pros have come to expect from the St. Lawrence River. Needless to say, it hasn’t disappointed so far.

Group A of the Tackle Warehouse TITLE Presented by Mercury showed out on the first day of competition, with 12 of 25 pros catching more than 19 pounds. And while it was by no means a necessity, it seemed for the majority of those top pros, the longer the run the bigger the bag – with none running further or bringing in more than Joey Cifuentes.

The Arkansas pro basically ran to “the line” – the off-limits line right at the mouth of Lake Ontario – in order to bring in 23 pounds, 4 ounces to edge ahead of Kurt Mitchell, who also caught 23 pounds to set the bar for Group B to reach tomorrow. And in the end, it sure seems like 20 pounds a day will be needed to make Saturday’s Knockout Round.

Then again, with how Cifuentes is fishing, he’s hoping he can just win his group and skip the Knockout Round altogether, especially with how long he’s running.

While the morning only took him an hour and a half, he took his time getting back to weigh-in to the tune of three hours to account for the waves from boat traffic. That didn’t leave a lot of time for him to fish, but he didn’t need it.

Even more impressive than that is he only hit five areas of the more than 50 he says he has down that way. Does he think he can replicate another 23-pound bag come Thursday? He’s not sure, but he knows the biggest fish in the system live in the lake, and during practice, the biggest fish he saw swimming around on his electronics were down near the lake. That’s where he plans to go again.

And as for patterns, there’s really no surprise. He’s fishing a Berkley PowerBait MaxScent Flat Worm on a drop-shot, though his setup and where he’s fishing the drop-shot is a bit different than most, which he feels is making a big difference.

All of this – along with the fact he was leading going into the final day of last year’s Tackle Warehouse Pro Circuit event here – would lend credence to Cifuentes being quite the smallmouth expert, yet he says he doesn’t feel like one, especially after how he faulted last year. Getting a little revenge this year definitely would be something sweet.

“I want to win every tournament I enter, but yeah, this one would definitely be great,” Cifuentes said. “For right now, though, the goal is just make the Knockout Round.”

If there’s one thing Mitchell knows about smallmouth, it’s that they’ll test you. Getting stressed out by smallies is a recipe for disaster. Hence, he has a simple mantra.

“The biggest thing with them is to stay loose,” Mitchell said. “Just keep running and looking. There’s always a sweet spot. You just have to find it.”

Mitchell’s practice showcased that, as he had almost zero to show for it until the final two hours of the final day when he found a stretch loaded with 3-pounders and a sprinkling of 4s. He went back there today, and “it was all 4s.”

To say that was a welcome surprise is an understatement. Yet, what really has him intrigued is a lone spot he’s yet to dial in. His last cast in practice there produced a 5-pounder, and today, the combination of wind, waves and current never let him drift it right to begin figuring it out.

“I still caught another 5-pounder off it, though,” Mitchell said. “I’ve caught two 5-pounders there. There might be something to that spot.

“Hopefully, I’ll dial it in Thursday, because it looks like I’ll need to catch them again with these weights.”

One is quickly gaining a name for himself as a smallmouth stud. The other is gaining a name as an up-and-coming stud. Both Dakota Ebare and Andrew Loberg are in prime position to make the Knockout Round despite differing ways of getting here.

For Ebare, he has significant history on the St. Lawrence and was actually a little disappointed with what he saw today. Yes, he caught tons of fish, but it took him a little more effort than he’d have thought to catch the right quality – and that makes him pause considering he’s making such a long run.

“This place is such a phenomenal fishery, but it’s very hard to be consistent,” Ebare said. “When you’re making that long of a run and you’re all fishing around one another, it gets tough. I’m gunning to win my group. It’s attainable.”

Then again, not everyone is making that long of a run. Example A: Loberg. The runner-up for Polaris Rookie of the Year was just thrilled to make the TITLE, and being a young guy, he didn’t mind saving some gas when he found plenty of fish running around from Ogdensburg to Massena.

Today, though, his fish grew up, as he caught more quality than in practice. Better yet, he feels he’s dialing in his area he has mostly to himself.

“I really narrowed things down today, and I think Thursday I can really pick them apart,” Loberg said. “I’m stoked. If nothing else, I’m at the ‘ship, especially in my rookie year. It’s pretty cool.”