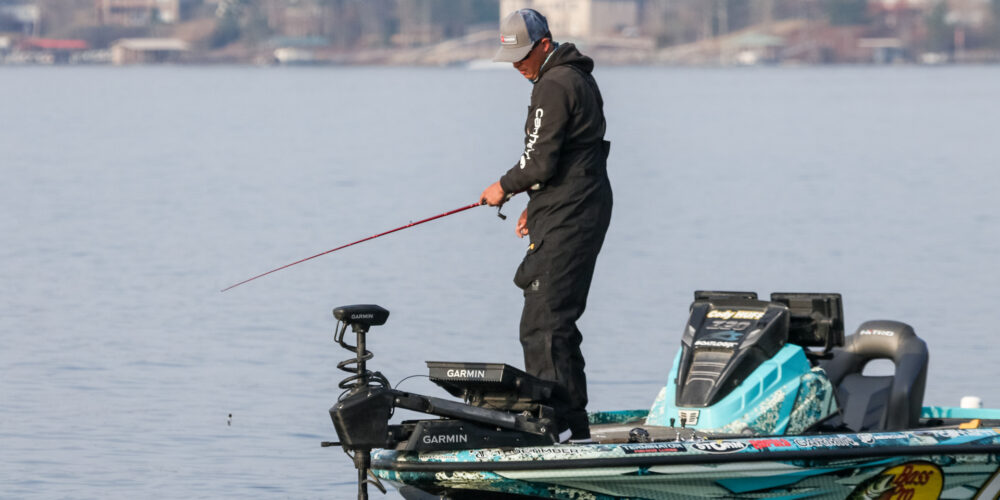 If you’re just getting into the forward-facing sonar game now, you’ve arrived fashionably late to the party. Still, there’s no time like the present, and the book on forward-facing sonar hasn’t been written yet. Fishing with Garmin LiveScope, Cody Huff has been at the cutting edge since his days at Bethel University, and though each forward-facing product is a bit different, a lot of the same principles apply between them. So, if you’re new to forward-facing sonar, or just looking to up your game a bit, consider taking a note or two from Huff.

It’s very easy to buy a pre-boxed setup from almost any electronics manufacturer these days to get you rolling with forward-facing sonar. Huff uses LiveScope, and he’s got a few general equipment preferences that are interesting to consider.

One of the biggest things Huff does is run a big screen, opting for a 16-inch graph on his 2021 tournament rig.

“If you’ve used LiveScope before, you know when the fish are going straight away from you or straight at you, you can barely see them,” he says. “When that stuff happens and I’m running the 16-inch, I can see that stuff, the stuff you could never see before. People say I’m crazy for running one that big, but I’m a big fan, it makes a difference.”

Troy Morrow runs a 10-inch unit for his LiveScope, and it’s not uncommon advice to go with a 10-inch size for picture and affordability. Still, Huff is a believer in bigger being better.

“I use it so much, I can justify having it,” he says of his 16-inch unit, which is an upgrade from the 12-inch graph he used to run. “The bigger, the better for me, if I could fit a TV screen up there I would. I had a buddy that bought a 10-inch, and he went fishing with me, and he sold his the next day and bought a 12-inch. You can do all the same stuff on a 9-inch or a 10-inch, it just makes it easier on you.”

If a really big graph isn’t in the cards, one thing Huff would recommend regardless is mounting your unit on something that is a bit higher up than standard. Every inch helps when it comes to staring at the screen, and when you’re catching a lot of fish on forward-facing sonar, you’ll end up staring at it more than you’ve ever looked at a bow graph before.

2. Experiment with Your Transducer Angle

3. Keep Your Foot on the Pedal

One of the most common goals with forward-facing sonar is watching your bait in the water column. Along the way, you can learn a lot about your retrieve and the reactions of the bass along the way. But it’s not necessarily super easy to do until you get used to it.

“Everybody wants to find their target, a brushpile, or a rock, or whatever they’re throwing at, and they’ll point their trolling motor at it, take their foot off it, and cast and just expect the boat not to float,” Huff says. “They expect nothing to move, and they think it’s the equipment’s fault that it didn’t stay in front of it.

“If you’re really trying to use LiveScope to its full potential, you’ve got to always have your foot on the pedal where you’re able to move it back and forth and adjust with the wind and the boat movement,” Huff explains. “If you’re fishing schools of baitfish, you need to always have it moving and be following the bait. Those variables are moving all the time, and you’ve got to keep moving with them.”

Fear not, if you’re having trouble keeping your bait or target in view, Huff has a quick fix to shorten the learning curve.

Forward-facing sonar helps in a lot of ways, but it can help you unlock truly new ways of fishing, which is one of the things Huff likes best about it.

“You always hear stories about guys catching them out over deep water on topwater and stuff like that,” Huff says. “You just hear it, you’ve never seen it, and you don’t know where to start. Since I’ve got LiveScope, I can learn in areas that there are little spots where they’ll just stay up by the top, where you can actually fish what looks like the middle of the lake, but because of a contour line that comes up a little higher than the rest, they’ll still hang around that.”

It’s something that he thinks would be nearly impossible to find on traditional sonar, because high, roaming offshore fish don’t tend to stay put.

“You would have to get really, really lucky,” he says. “You’d have to get crazy lucky to somehow idle right over them, because they move so, so much. With LiveScope, you can see them and stay with them.”

High, offshore fish have gone a long way for Huff in the past. In the fall of 2020, he locked down the win in the Toyota Series event on Table Rock with smallmouths he plucked from 10 feet down in over 100 feet of water.