Cox on the Path for Smith Lake Redemption 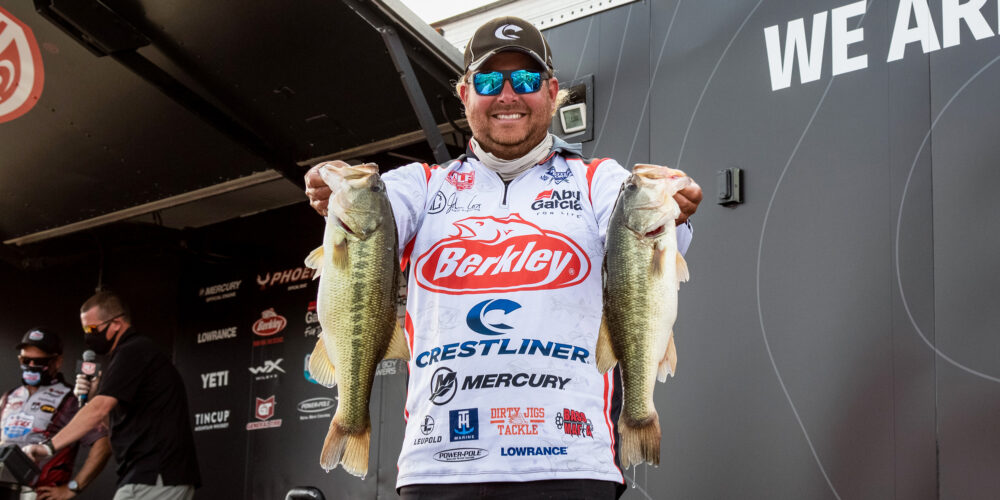 Largemouth bass nudged spotted bass out of the way today at the top of the leaderboard of the Tackle Warehouse Pro Circuit event on Smith Lake. John Cox of DeBary, Fla., ushered five largemouth weighing 16 pounds, 13 ounces to the scales to take over the top spot from Kerry Milner, who held the lead yesterday with spotted bass.

Cox has been runner-up in two previous events on Smith Lake – and had a shot at a third win back in 2015 before being thrown from his boat on the final day – and wants to finally close the door on a victory on this fishery. This time, the conditions seem to be lining up in Cox’s favor. While the deep spotted bass bite waned today, Cox noted that things just seem to be getting better in the woody shallows where largemouths are moving in to spawn.

Though Cox says he has seen beds “popping up” shallow, he exhibited a large degree of self control by purposely avoiding getting “sucked in” to the bed-fishing game too early. Eschewing the bed-fishing temptation today proves an excellent example of why Cox is one of the best shallow-water anglers in the game today.

“I kept telling myself don’t do it,” he says of avoiding the bed-fishing rabbit hole. “Don’t go up there and start looking at them yet. Just stay out [a little away from the bank] and cast out deeper where you can’t see them. I guess you could say I have finally grown up because I didn’t get sucked into it too early.”

Cox’s reason for leaving the beds alone is he believes the fish aren’t ready yet; they’re still cruising and rubbing and have not laid eggs to defend in the beds.

“They are just now moving into these areas from deep water,” he explains. “I just felt like, at least for today, I was better off throwing to the places and objects where they are moving up to stage and acclimate to the shallows.”

Cox only caught five keeper largemouth on the day, but he has every reason to believe the largemouth migration is going to keep coming his way, given a warming forecast to 77 degrees on Saturday and 80 on Sunday.

“The water got to 62 degrees in some areas today,” Cox says. “I had a couple of places I went into early in the morning, and they were just dead. But when I went back this afternoon, it was like they had come to life with fish pushing wakes, and shad and minnows moving around. It’s amazing how fast that happens.”

Two other factors working in Cox’s favor this week are Smith’s water level has been extremely stable for the past 10 days and the new moon hits tomorrow. By Sunday, things should be at a peak on Smith Lake for the way Cox likes to fish.