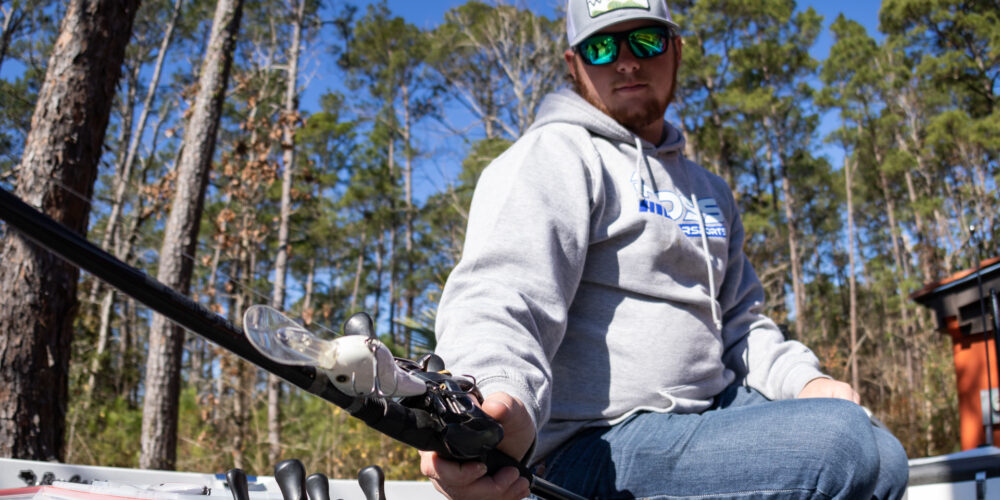 River Lee and the rest of the field have a lot of stress packed into Saturday before the field is cut to the Top 10.
January 28, 2022 • Sean Ostruszka • Tackle Warehouse Pro Circuit

Do you lay up or go for broke?  That’s the question on every angler’s mind today.

With Day 2 of the Tackle Warehouse Pro Circuit Presented by Fuel Me event on Sam Rayburn postponed due to high winds, the entire field will fish Saturday before getting cut down to just the Top 10 on the final day. That’s the typical operating procedure – one that guys in the lead tend to love because it’s one less day they have to try and catch a good bag to secure a big check. And if you’re way behind, you have almost zero shot at a big check.

However, this year there’s the added wrinkle of the new format of weights being zeroed on the final day. That means leads don’t matter anymore. Places don’t matter. All that matters is making the Top 10 and you go from having a have a 1-in-158 (.6%) chance at a six-figure payday to 1-in-10 (10%).

So, with Day 2 of Guaranteed Rate Stop 1 Presented by Ark Fishing being canceled, Saturday becomes quite the decision day for the entire field. Do you swing for the fence and try and get in the Top 10 for a shot at $100K or play it safe and try to secure your $10K?

It’s a tough decision in any tournament; but it’s going to be significantly harder tomorrow. Why? Because on a lake like Sam Rayburn, where any cast can be a 10-pounder and mega bags over 30 pounds happen regularly, literally the entire field still has a shot at $100,000.

All that separates them is one day of fishing and the decisions they make. Here’s a look at three different pros and what’s running through their heads with so much on the line.

Two days ago, Dylan Hays admits he would’ve been “begging for a check” after his horrible practice. Now, he has a real chance at the biggest check as he sits in 10th … so long as he can hang on for one day.

That’s quite the change in fortunes; one that would probably stress out most anglers in his position, where most everyone is gunning to knock him out of the No. 10 spot. For the level-headed Hays, though, he says Day 2 being canceled actually has made his life less stressful.

“My game plan doesn’t change,” says Hays. “I really only have one hole where I caught my weight yesterday, and I didn’t expect to catch 16 pounds. So, I hope I can catch another 15-16 pounds Saturday to make the Top 10. That will be my goal for sure because Top 10s don’t come around every single day, especially not ones like this. At the same time, if I catch just 8-9 pounds I’m guaranteed $10,000.

“So, I’m not stressed at all. There’s no point in getting stressed.”

If anyone knows the power of one big bite on Sam Rayburn, it’s Grae Buck.

Back in 2020, he caught a 9-8 the first day that had him in the top five, and he was able to ride it to a top-25 finish. If he can do it again Saturday, he’ll flip-flop and go from the top 25 into potentially the top five.

That thought has him pretty excited.

“[Day 2 being canceled] definitely changes my strategy,” says Buck, who is only 2 pounds back from Hays in 10th. “Normally, it’d probably just try to scrounge up a 10-11-pound limit get in the top 50, get a check and earn some solid points.

“Now, I’ll still try and secure a top 50, but once I do, I’m going to have to swing a little harder to try and get up there. And all it will really take is one big bite, which can happen any cast here. [Saturday] will be fun.”

Thursday was definitely not the start rookie River Lee was hoping for, especially since Sam Rayburn is his home waters.

Despite catching tons of fish, he simply never found any quality, which definitely surprised him based on the places he’d been fishing. Thus, he admits that after yesterday, he’d pretty much closed the door on thinking about getting a check. His goal was simply to salvage points so he still had a shot at the TITLE.

Yet, Day 2’s cancelation may have opened the door for him.

“I don’t want to go for broke completely because if I don’t at least catch 10 pounds again I’ll drop into the 100s, and I don’t want to start my year off like that,” says Lee. “So, I want to be a little conservative, but I’ll definitely try and find a big one or two to get back in it.”

Despite being so far back in the standings (90th place), he’s only 5 pounds back in weight from 10th. Hence, Lee figures a 19-pound bag will get him in the Top 10, which is a weight he’s accomplished “a bunch” on this lake.

“On this lake, every place can produce a fish that size. I was shocked I didn’t get a quality bite where I was fishing on Day 1. But I do know some places where big ones tend to live, and once I get 10-11 pounds to salvage points, I’ll definitely go looking for a big bite or two to make it to Sunday.”