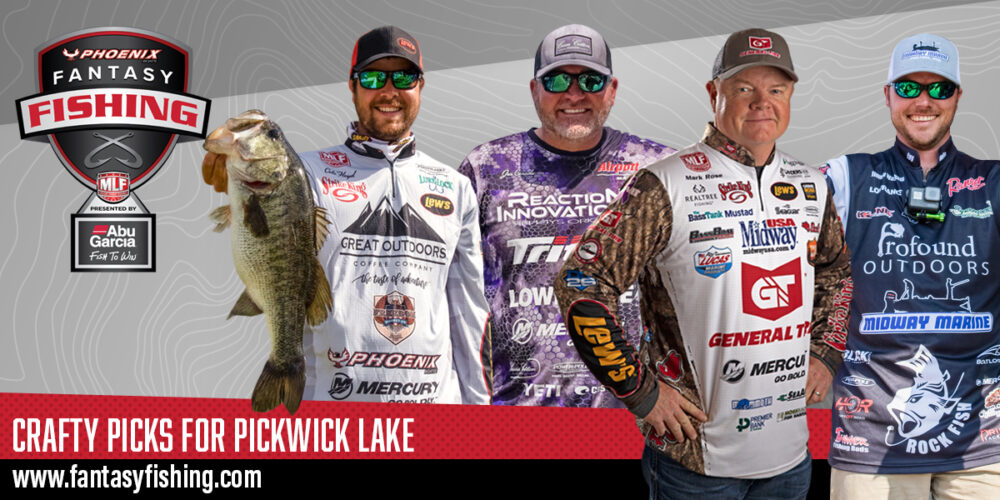 The Tackle Warehouse Pro Circuit Presented by Fuel Me moves north to the Tennessee River for Lithium Pros Stop 3 at Pickwick Lake. The event will mark the md-point of the season and kick-start the various points races for the second half. So with Texas and Florida in the rearview, it should be a good settling point. The event is also set to be pretty interesting from a pattern standpoint, with a lot of fish on beds and around the shallows, which likely means an old-school ledge shootout won’t be on the table.

As such, making Mark Rose the centerpiece of a successful Phoenix Fantasy Fishing Presented by Abu Garcia team isn’t a lock, and some of the usual Tennessee River stalwarts may not have quite as much of a local advantage. Still, there’s an abundance of local and semi-local talent in the field. If you wanted to stick with anglers that go to sleep dreaming about CFS and StructureScan, then you’d be more than able to.

For Flight 1, I took Michael Neal, Jacopo Gallelli, Mitch Crane, John Cox and Jon Canada. Overall, I tried to take a pretty balanced approach to the squad, and there was a lot of really good talent available in both flights to make that happen. Some of the picks are pretty obvious–Neal and Cox are basically locks everywhere. Bu I thought I’d dive into a couple of the others in more detail.

Crane Has What It Takes

A Mississippi address doesn’t exactly ring as local on Pickwick like a Tennessee or Alabama hometown, but that’s easy to get around. When fishing a full season of the Phoenix Bass Fishing League Mississippi Division, Crane has never finished below 16th in points and always had at least one Top-20 finish on Pickwick. A versatile shallow-water angler with a fast boat, Crane has plenty of local knowledge and won’t be afraid to ignore idling in favor of fishing. Plus, he’s had an eye for the shad spawn in recent years, and that might be a big player if things break right.

Look For Gallelli to Do Well on His “Home Turf”

Since coming to the US, Gallelli has done extremely well on Pickwick and made his home in Alabama, fishing Pickwick and Guntersville regularly. Most of his success on Pickwick has come in the fall, but it doesn’t mean he should be counted out this time of year. A possible contender in a current or smallmouth situation, Gallelli has also proven very capable to fish shallow over the years.

Momentum Is Back for Canada

Ever since Canada’s superlative 2020 season, we’ve been waiting for him to get back in the groove. Now, it looks like he might be with a solid finish at the Harris Chain and a great finish at the B.A.S.S. Open on Cherokee in the recent rearview. Well-seasoned in the southeast and on Pickwick, Canada is really good shallow, and this feels like the kind of derby he could excel in.

For Flight 2, I think I took a few more gambles, but I also got plenty of local talent and plenty of shallow talent. First, I took Spencer Shuffield, then put Matt Becker, Cole Floyd, Rose and Jimmy Washam on the team. Between Floyd, Rose and Washam, you’d be hard-pressed to find a more prepared trio for Pickwick, and they all have different skillsets. Where things get risky is at the top of the AOY standings.

Putting My Trust in Becker and Shuffield

Both Becker and Shuffield arguably should not have missed out on Bass Pro Tour qualification in 2021, and I think they’re both out to change that this year. Shuffield has had success almost everywhere and were this fated to be an offshore event, he’d be almost a lock anyhow. As is, he’s certainly capable of doing well regardless. Becker on the other hand hasn’t really excelled on the Tennessee River, and this upcoming stretch is quite a gauntlet for him to run.

Discount Rose at Your Peril

Given that Rose has made his bones offshore, it’s tempting to try for a lower-percentage angler that might do better. It’s a plan I’m sympathetic to but avoiding, because I think Rose has proven time and again that seasons don’t matter to him on the Tennessee River.  He’s won in the prespawn and winter at Guntersville, and in April of 2016 he got on a dope offshore shad-spawn pattern on Kentucky Lake. So, Rose may have scuffled in last fall’s Toyota Series Championship on Pickwick, but I’ve got a hard time seeing two bad derbies in a row for him on any lake built by the TVA.

The deadline to make your team’s picks for you Phoenix Fantasy Fishing Presented by Abu Garcia team is Thursday, April 21 at 7:30 a.m. ET. Make your picks at FantasyFishing.com by then to secure your team for Stop 3 of the Tackle Warehouse Pro Circuit Presented by Fuel Me.