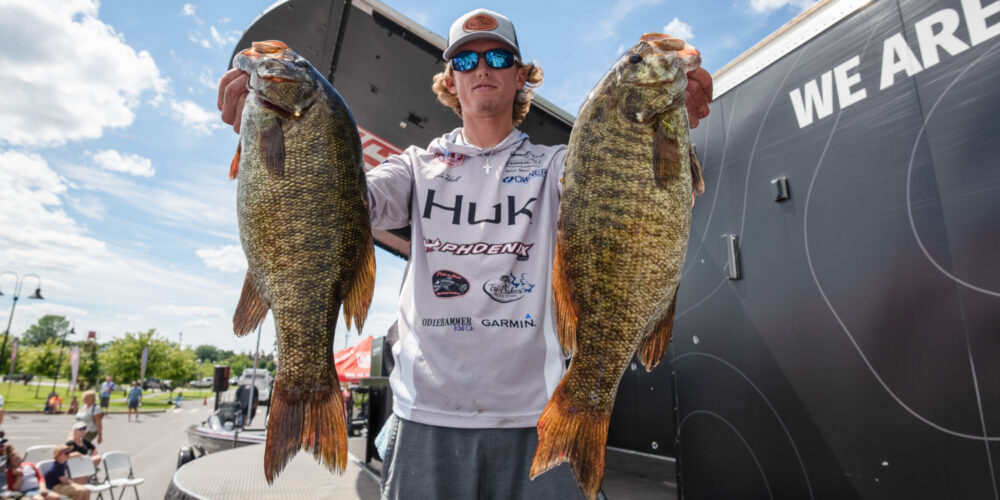 Hall, the 2020 Polaris Rookie of the Year, boated 61-9 over three days to edge out a tight field, with five anglers weighing in over 60 pounds. To do so, he overcame shifting conditions and a strong southern wind that churned Champlain into a stew of 3- and 4-foot swells.

“I feel pretty good,” Hall said. “I caught 18 pounds pretty quick this morning. I was wanting 20 just to make sure – in case I had something wrong with a fish or was late.”

Hall said he couldn’t get a bite from mid-morning until afternoon, but plans to lean heavily on a key spot in the Inland Sea that’s been bringing big bass to his boat all week.

“It’s a pretty big area and I haven’t seen anyone around it all week,” he said.

Hall is primarily fishing in 14 to 16 feet of water. Following schools of baitfish, he’s using a drop-shot with a Berkley Powerbait Maxscent Flatworm and 6th Sense Divine Swimbait to target smallmouth following that bait. After a rough season, Hall finds himself in his first championship round of the year, and says he’s planning to go all out for the win.

Kyle Cortiana wrapped up three days with 60-15. By the time the Top 10 was finalized, Cortiana trailed only Hall in the rankings. On Championship Monday, the Broken Arrow, Oklahoma, native has a lot to fish for – 1,500 miles away from his home in Oklahoma, Cortiana’s father Carl is in attendance to see his son fish for all the marbles.

“I’ve worked really, really hard to get to the pro level,” Cortiana said. “Six years later, I’ve had very few chances to fish for a championship. We’re all competitors at heart, and if you’re a competitor you want to be No. 1. So to get a chance to do that, reconfirms that you’re doing what needs to be done. It gives you that energy you need to keep it rolling.”

Cortiana has been fishing mid-lake using a variety of patterns that have played successfully for different anglers throughout the event. To reach the championship day, he fished community holes, ran to boats and buoys and fished deep rocks. His primary weapons have been a Carolina rig, hair jigs, spy baits and drop-shots.

Going into the final day, Cortiana feels he has plenty of fish left on the table.

“I just didn’t go fishing where I knew they were at today,” he said. “I have a starting spot that seems to produce some fish each day and by the time I left that I had 17 pounds. That was all I really needed.”

Cortiana boated the biggest bag weighed thus far at the event with a 22-2 limit on Day 2. He will likely need to replicate that performance to become a Tackle Warehouse Pro Circuit champion.

Newcomb Conquers Gremlins to Get a Top Three

Also with 60-15 over three days, Camdenton, Missouri, angler Andy Newcomb persevered through the loss of his trim, hot foot and a 4-pound smallmouth kicker to stake his place in the Top 10.

“The spring busted on my hot foot. I went to take off and the spring went ‘pow’ and that was it,” he said. “That was after I just found out I had a dead fish and my trim went out. I had quite the day.”

Newcomb, whose feet were clad only in flip-flops, had to borrow his marshal’s tennis shoe to navigate his boat through heavy waves whipping up on the main lake. He wound up catching his last fish of the day wearing one flip-flop and one tennis shoe.

Despite the bizarre day, Newcomb says he is confident in his game plan for the final round.

“I feel good,” he said. “The fish acted a little funny today, but I know they’re there and they are definitely the right ones.”

The Rest of the Field

On Monday, the 2022 regular season finale of the Tackle Warehouse Pro Circuit Presented by Fuel Me awaits, and there’s no guarantee that Sunday’s top three will be in the conversation when it’s all said and done. Lurking in the wings are a resurgent Skeet Reese, a confident Matt Becker – who says he hasn’t even been able to fish past 9 a.m. all week – and dangerous hammers like Dakota Ebare, Kurt Mitchell, Alex Davis, Jon Canada and Joey Cifuentes.