Hibdon on Top After a Big Day on the Potomac 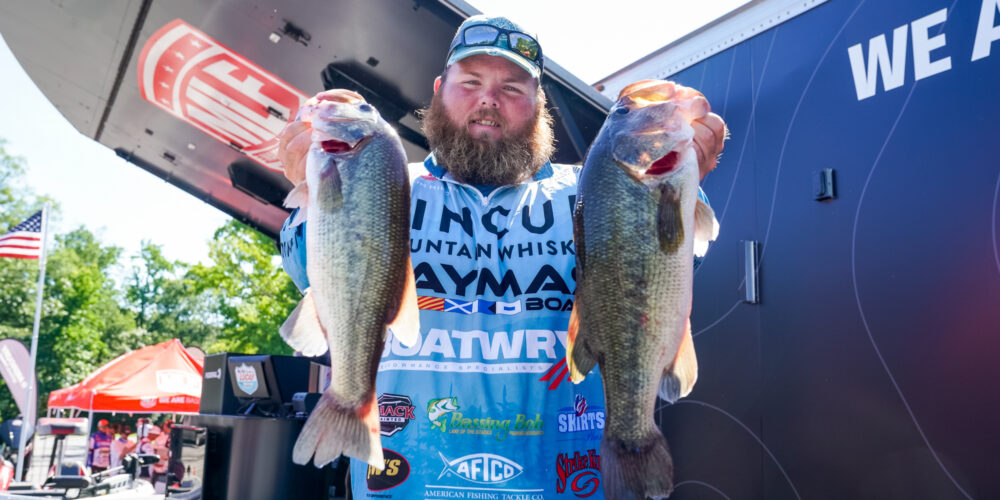 Day 1 of the Tackle Warehouse Pro Circuit Presented by Bad Boy Mowers on the Potomac River was a certified banger. Federal Ammunition Stop 5 Presented by Lucas Oil featured not only a strong leading weight, but more than 20 bags over 15 pounds on the first day. Leading the pack, Lawson Hibdon put 17 pounds even on the scale to edge ahead of Zell Rowland’s 16-15 by just 1 ounce. Going into Day 2, the pressure could slow things down a bit, but there’s no reason to think the fishing will drop off too much, which should make for a fun race well into the weekend.

Lawson, who’s the son of legendary pro Dion Hibdon, is far from his home in the Ozarks of Missouri, but he’s not letting that stop him from making hay on the Potomac.

“I’ve been [to the Potomac] three or four times I think, never as a pro,” says the 26-year-old rookie. “I’ve fished as a co-angler and practiced with dad a lot, but I don’t have a lot of experience.

“I’m trying to stay away from people a bit, but I still had to fish around ‘em a time or two today. The biggest thing I figured out was that I had to slow way down. I really expected to weigh 12, 13 pounds like you’re seeing a lot of those stringers, but I slowed down with a worm and caught some better ones today. It was very unexpected, I was not ready for it at all, but it worked out today.”

Those with experience on tidal fisheries like the Potomac tend to make a game plan to run the tide to maximize their time in certain stretches of the river during prime times. Hibdon is certainly not one of them.

“I don’t know how to play the tide or none of that,” he says. “I had about 11 pounds by 9 o’clock and really after that for whatever reason I started catching some bigger ones. I don’t know if it had something to do with the tide or I just slowed down and caught some better ones, I don’t know. From 10 to 2 I caught all my weight. I’m sure tide does have something to do with it, but I can’t tell you what. I do not know anything about the tide.”

Despite his lack of experience on the Potomac, Hibdon actually sampled several areas today finding success in each. He’s hopeful he can get at least a few of those areas to fire again tomorrow.

“I hopped around a couple different creeks today and it worked out because I caught some out of each creek that I went to,” he adds. “I think I fished three different creeks today. I don’t know how many I’ll have to fish tomorrow to catch some, but hopefully I can fish those same three, or at least two of them. Two of them were better.

“I don’t know how many keepers I caught today, but it was probably in the twenties I would say. They were biting.”

With the same game plan on the docket tomorrow, Hibdon also plans to keep a few techniques honest, though he’s fully prepared to fish slow and steady.

“I caught a lot of ‘em on moving baits – spinnerbait, ChatterBait. Then I slowed down with the worm and it seems like I didn’t get as many bites, but they were a little better quality.”