How Other Species Keep Jeremy Lawyer in Fishing Shape 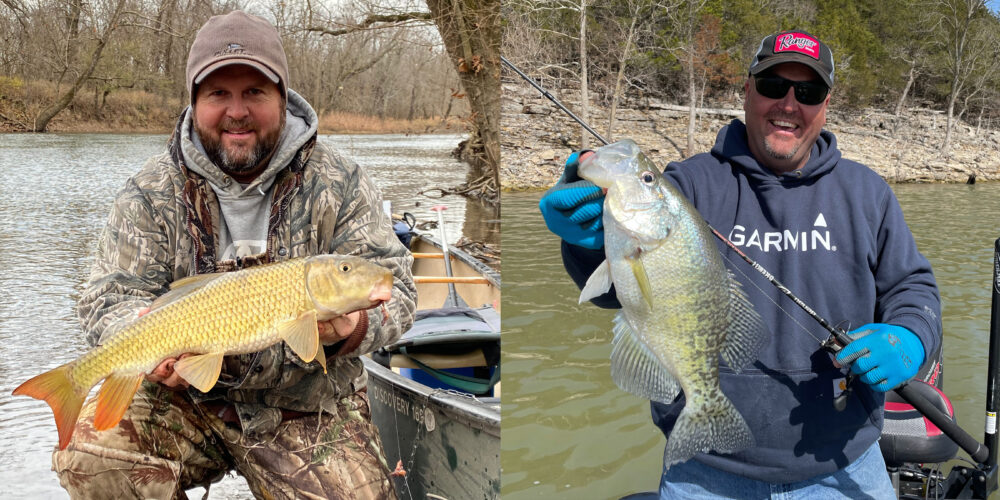 Jeremy Lawyer grew up like most anyone that got introduced to fishing at a young age, by chasing anything that would bite. From catfish to bluegills to carp, Lawyer quickly became a fan of simply catching fish, no matter the species, which is something he hasn’t lost to this day. In fact, Lawyer believes that chasing “other species” is something that has helped him hone his bass fishing skills and knowledge of his electronics over the years, all while providing year-round fun and occasionally helping to fill the freezer.

Staying in Touch With His Roots

Growing up in southern Missouri, Lawyer had easy access to small ponds, rivers and lakes. Because of it, he was exposed to a wide range of species to target.

“We fished for everything,” says Lawyer of his childhood. “We trolled for white bass, caught crappies and we caught bass and ate a lot of bass. We didn’t pitch ‘em back much, especially out of farm ponds.

“As a kid, we went perch jerking a lot too, which is still one of my favorite things. We like catching ‘em and eating those. But we use ‘em for trotline bait and things like that on the river. So, to this day, one of my favorite things to do is go take a cooler and go around to potholes and branches and catch a cooler full of perch. We either use them for bait or if we don’t need ‘em for bait, we’ll dump them in ponds so that we always have a place we can go catch bait out of when the potholes go dry.”

Despite the obvious fun to be had reeling in numbers of fish, Lawyer also looks at his time away from chasing bass as a good reset from the tournament scene.

“I think it does two things,” Lawyer explains. “I mean, I get burnt out bass fishing. I think every bass fisherman does to some extent or some degree. So, it’s just a nice break from that. But it still allows you to get outdoors, stay in good fishing shape and you still get to fish. I don’t want to say it keeps you in shape, because I’m a dang long way from being in shape. But I’m in outdoors shape. Fishing shape. If I need to fish seven days in a row, 10 hours a day, I feel like I can do that. And it just keeps you fresh.”

Still, as a competitive angler, Lawyer also appreciates the challenge that comes with targeting some of his favorite fish.

“You know, carp, as goofy as they look and as meaningless as they kind of are, they’re hard to catch,” Lawyer says. “They’re a stealthy critter. They feel you walking on the bank and are real skittish to your shadows, so it still takes some thinking to catch them. The nice part is, if you lose one, it doesn’t matter. Where if you lose a big ‘un bass fishing, your world comes to an end. It’s just a different scenario in the fishing world, but yet keeps you on your toes. It’s still a challenge.”

One big advantage of spending a lot of time on the water chasing non-bass species is that it has helped Lawyer become more dialed with his electronics, especially when it comes to forward-facing sonar.

“It’ll keep you tuned in with all your electronics,” says Lawyer. “We do a lot of fishing from the bank on ponds and rivers, but even when I’m in my bass boat fishing for so many different things, I can see fish even in 70, 80 or 90 feet and say, ‘Well, that’s a school of suckers or a mess of carp or a bunch of crappie.’ You get to fishing for all these species and see how they set up and then when you get in the bass fishing scenario you’re not wasting your time fishing for something that’s not even a bass. It can be tricky to figure all that out, but fishing for stripers, carp, catfish and crappies helps sort all that out and speeds up the learning curve that much faster.”

Right now, forward-facing sonar is one of the hottest fishing-finding tools on the market. But Lawyer explained that if you’re trying to learn how to efficiently target bass with forward-facing sonar, you’ll need to be around a lot of them to become familiar with what they look like on the unit and how they react.

“If there’s a school of three or four bass and you catch one, the rest will probably run off on you, so by the time you started learning a little bit you have to go find more,” Lawyer said, “But if you get out there and get to chasing stripers or crappie or white bass, something that runs in a school over open water, you can keep chasing them and keep catching them. In a day’s time, you can catch 50, 60 or 100 fish and learn how your bait works underwater and how the fish react. With the pressure on lakes today, catching a dozen bass is a pretty good day. But you can sit on a school of crappies for 3 hours and constantly learn where your bait is and what it’s doing and how the fish are reacting.”

Thinking Outside the Box

With a resume like Lawyer, who has wins at the Toyota Series and Tackle Warehouse Pro Circuit levels, along with a Phoenix Bass Fishing League All-American win, you still can’t go on the water without trying to learn a little extra about catching a bass – even if you’re not targeting them at the time.

“I’ll give you the perfect scenario,” Lawyer says of learning something new. “Just the last few days I’ve been crappie fishing up at Stockton Lake and these crappie wanted to sit on the down-current side of the pile. We don’t really have current like stream current, but the wind current, and they all wanted to be on the down-wind side next to the side of the tree that was cut. Like where the stump was. They could get over on the top of the tree, but they wanted to be on the side where it was cut. So many times bass fishing you think you need to throw it right in the center of a brush pile, but it’s got me thinking the bass will do the same thing and they have. You’ll see the crappie move on LiveScope for a minute and a big fish like a bass or catfish will come over to that same side of the tree and sit there. So, even they want to be there in that same scenario. Next time I’m bass fishing a pile, I may start by throwing at the cut side, or bare side, of the pile first just to check, because I’ve seen that play out so many times while I’ve been crappie fishing.”

One of Lawyer’s favorite things to do is catch catfish on Grand Lake in the winter. Even when he’s on a mission to fill the freezer, the Missouri pro is always alert to the fact he may learn something that could pay off at a later time in the bass realm.

“Even with cats, we started catching them several years ago in like 20 to 25 foot,” Lawyer says of his wintertime activity. “Then we went to 30 and now we’re catching them in 60, 70 foot and it’s opened my eyes that a lot to fish live that deep in the winter.

“So last year down at Table Rock, I fished an event there in December and we caught several bass on the bottom in 60, 65 foot. But if I hadn’t went out catfishing to know them catfish eat those shad all winter that deep, I wouldn’t have even tried to target those bass. It really opened my eyes. If those shad are out there, why wouldn’t the bass be out there that deep? And boy, they’re out there.”

Time on the Water is Time Well Spent

While Lawyer may look at his time spent away from bass fishing as a way to relax, he’s well aware of the fact he still is bettering himself as an outdoorsman and bass angler.

“I think it keeps you more in tune with what’s happening on the water, too, and helps you consider things to try that may go against what the book says,” Lawyer says of being on the water chasing whatever bites. “Bass fishing, you may think it’s too cold to throw a topwater, but you try it while you’re out for fun and next thing you know it’s 51-degree water and they’re smashing it. And it might help give you more confidence, which leads to more success.

“I can almost guarantee you I learn way, way more on days that I’m not in a tournament situation. If you’re on a lake with a bunch of docks and there’s a tournament in two days, you gotta go find ‘em. You’re going to put on your favorite jig, your most confident trailer and go fish. Where on days without pressure, you might throw a tube, or something you haven’t fished in a while because you have a chance to experiment and try stuff. Next thing you know, you found the latest and greatest thing nobody has jacked with them on lately.”

Getting worn down from the tournament grind is nothing to worry about. Heck, it happens to the best in the business. But instead of keeping the boat on the trailer for a few days, consider grabbing some crappie jigs and going to catch some dinner. Or maybe go chase those stripers you saw blowing up all over the main lake the other day. Getting back to the basics of fishing can do wonders for the soul all while sharpening your skills. Just ask Lawyer.