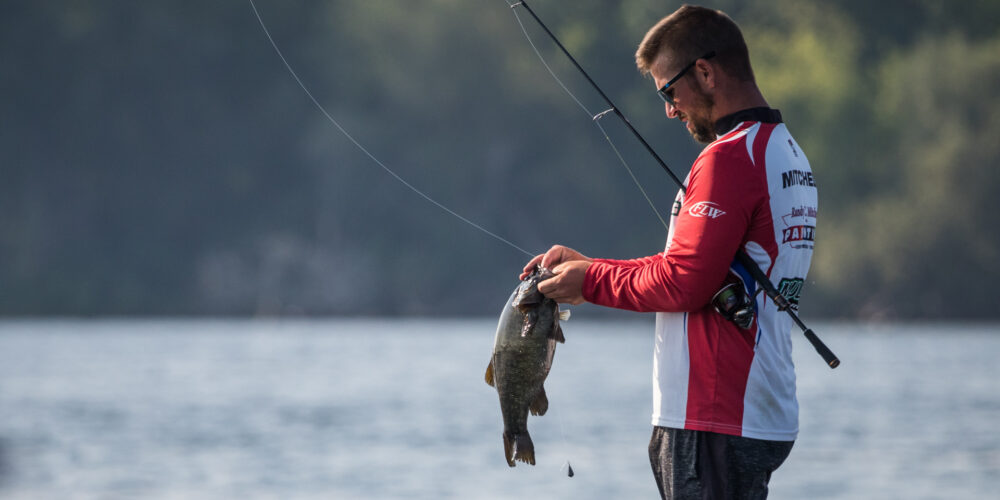 Over the last few years, Kurt Mitchell has had a ton of success in smallmouth tournaments. This year, he knocked out a Top 20 and a Top 30 on the St. Lawrence. Last year, he won a Toyota Series event on Lake Erie and caught basically every bass in Lake Michigan at the Tackle Warehouse TITLE on Sturgeon Bay. All the way, the Berkley PowerBait MaxScent Flat Worm has been the hot deal, but Mitchell isn’t all about the new hotness. For his part, he’s employed a few drop-shot baits that aren’t secret, but also aren’t locks to be on the top sellers page at Tackle Warehouse.

Responsible for the vast majority of his drop-shot catches and in stock in every color, Mitchell dotes on the Yamamoto Shad Shape Worm.

“The first time I ever went smallmouth fishing, I got a check on Lake Erie at Sandusky,” says Mitchell. “I brought tubes, and I brought like 20 different drop-shot baits – at that point, a Jackall Crosstail Shad was what everybody was throwing. I had a pack of Crosstail Shad, and I was catching a fish here and there, but when I went to the Shad Shape Worm in that tournament, every time I saw one and dropped to it, I would get bit. With the Crosstail Shad, still, 90 percent of them ate it, but when I went to the Shad Shape Worm, it was every fish. I thought ‘this is it; this is the best smallmouth bait ever made’ and I’ve been throwing it ever since.”

To date, his biggest win with it was last summer at Erie, when Mitchell clobbered 24-11 on Day 2 and won by more than 2 pounds. As for why he thinks the bait is so good, Mitchell figures the high salt content sets it apart from other more buoyant baits.

“Everybody talks about how you want your drop-shot baits to float,” he says. “I don’t, I want it to look like the bait is swimming up. When a little small fish gets injured, usually they try to swim up. That’s why I think the Shad Shape Worm works a little bit better – it’s heavily salted, so it doesn’t float.”

The fact that it sinks well gives Mitchell an extra sneaky presentation he can use on difficult fish.

“Another thing you can do with it, if it’s dead, slick calm, is I’ll be working the bait, and then I’ll just completely slackline it. If there’s one following it or whatever, a lot of times they’ll eat it up when it’s falling like that. On a slack line, your drop-shot might have a 20-inch leader, and you’ll get 20 inches of a real slow fall.”

Try the Spark Shad for a Unique Swimming Option

This year at the St. Lawrence, Mitchell discovered that he could crack deep current smallmouths on a 3-inch Megabass Spark Shad. Fishing it on a drop-shot deep, Mitchell got some otherworldly bites on it and put 21-14 on the scale on Day 1 of this year’s Toyota Series event.

Interestingly, dialing in the right amount of tail kick on his swimbait was important for Mitchell.

“The Spark Shad, for that particular deal, works way better than a Keitech Swing Impact FAT does,” he says. “I tried the Keitech out there for that and it doesn’t work at all. The tail kick on the Keitech is slower and wider, and it just doesn’t look right.”

The Rest of the Tackle Picture

Outside of his baits, Mitchell’s drop-shot rig isn’t anything too wild. He likes a Shimano Twin Power or Shimano Sustain for his reel, a 6-foot, 10-inch, medium-light Impulse spinning rod, braid and usually an 8-pound Seaguar InvizX leader. Most times, he likes a No 1. Gamakatsu TGW Drop Shot Hook, but he’ll drop down to a No. 2 if the fish are being finicky.

Though he’s mostly going with the grain when it comes to an actual setup, Mitchell does think the weight matters a bit.

“Generally, I throw a ½-ounce lead teardrop drop-shot weight,” he says. “I don’t like a lot of noise down there, some guys use tungsten, but it’s really expensive and I think you might catch less fish on it. When I won Erie, I actually went to a ¼-ounce, and when it’s dead flat, I will go to a lighter weight. I’ve been told by Matt Becker that does not matter, but I have personally seen it make a difference.”

Another thing Mitchell likes is a little Smelly Jelly on his baits from time to time.

“Personally, I think Smelly Jelly is the best scent that’s ever been made, and it was made 30 years ago,” he says. “People even use it for flounder around here, it’s like a top-secret thing.”

So, the next time you bust out a drop-shot, maybe try something new. Or try something old and slap a little Smelly Jelly on it. Either way, you might find another way to catch a smallmouth, and you really can’t beat that.