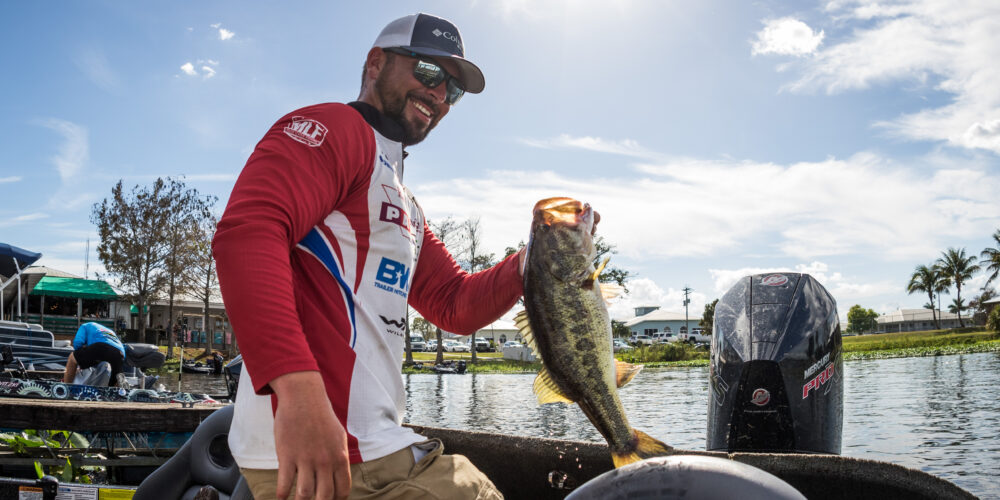 One of the most frustrating things about a frog is how easy it is to fish it in great-looking areas with plenty of bass and not know they’re there. If a bass isn’t committed to biting or nosing the frog, you might never see them, because you certainly can’t see them on forward-facing sonar or following the bait up to the boat. Luckily, the always innovative Kurt Mitchell has solved the problem, and he’s developed one special way to trigger unwilling biters. The key isn’t any special bait or wild retrieve, but rather getting a specific sound out of his frog on the pop.

Get the Right Sound

“When you pop it, you pop it really hard,” he explains. “You want it to sound like a bass is sucking something under. You know how they’ll come up and just ‘schloop,’ and not really kill it? That’s the noise I’m trying to make with my frog.”

Given the right situation, Mitchell says he can crush them on it.

Mitchell first discovered the special noise at the Potomac, and he’s run with it since, seeing great success with it on the Upper Chesapeake Bay and the south end of Lake Champlain.

“I was on the Potomac River, the first time I ever cashed a check in an FLW tournament,” he recalls. “I was watching bluegills, they would make little wakes to the edge of the grass and then slap their tail. So, I got a little popping frog, and walked it up to the holes, and right before it got to the grass I would pop it real hard. They would just destroy it. Then, I started fishing it in the mat, because that’s what I had tied on, and they would destroy it. It was so much of a difference, that I actually cut my bait off, because I had like 14 pounds or something, and gave it to my co-angler and then he caught his limit.

“I’ve seriously had days, where it’s made a huge difference,” he says. “I had a day at the Potomac, where I caught 40, and the guy in the back of my boat caught two, maybe three, and we were both throwing black frogs.

“I do that popping frog deal on mats to locate schools of bass under the mat,” he explains. “The popping frog ignites the school of bass under that mat, it’s kinda like burning a 6XD through a school on a ledge, but instead it’s a frog on a mat. That’s why I want to make my frog sound like a bass eating on top of the mat, because nothing gets a school of bass more fired up than the sound of another bass eating.”

Having the right frog is a big deal. Mitchell says actually getting the correct sound is hard with a lot of frogs, but he has a few favorites.

“Not every frog works, you need a popping frog with the weight more in the belly, more forward,” he says. “I like the Deps Buster K, the Evergreen Popper Frog, I’m pretty sure the Terminator Popping Frog would work, and Tommy Biffle’s frog, the River2Sea Spittin’ Wa is easily available and works.”

For his frog tackle, Mitchell prefers a 7-foot, 3-inch, heavy-power, extra fast-action Impulse Energy Series rod, an 8.1:1-gear ratio Shimano Bantam MGL and either 50- or 65-pound Strike King Contra Braid. Mitchell bases his line choice on his casting needs. For smaller mats, he goes with 65-pound, and he goes with 50-pound when he needs to make long casts over bigger mats.