Lane Leads the Pack at Eufaula 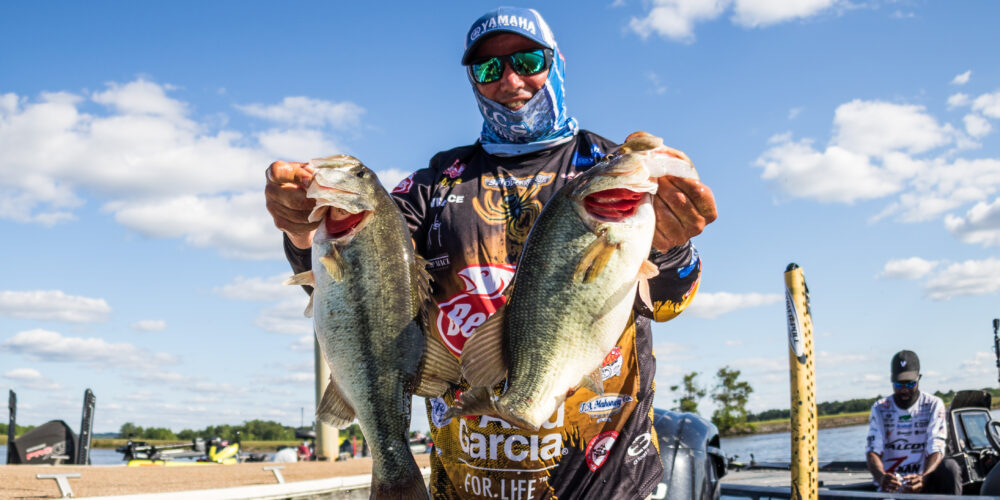 Few things in professional bass fishing are as lethal as experience, confidence and momentum. And when all three are working together, you have the kind of year Bobby Lane is having.

From Travis, Lane traveled straight to Lake Eufaula for the Grundéns Stop 4 Presented by A.R.E. of the Pro Circuit where he finds himself in the lead after Day 1.

“Recently I just can’t seem to make a bad decision,” Lane says with a smile. “Things have been going really good this year. Like today, I caught a 5 ½-pounder in a foot and half of water where I was not expecting to get bit. And I boat flipped everything and never lost one, which usually never happens.

“It is momentum and I got it right now,” he continues. “I feel good. I feel healthy. I just feel like fishing every single day. We are at the time of the year when I can fish all my strengths: flipping, frogging and swim-jigging.”

Today Lane fished those very strengths to catch five bass weighing 20 pounds, 8 ounces to take the early lead. He staked his claim in the shallow portions of Eufaula, targeting shallow fish that are still up feeding after the spawn.

Though he had hoped to tap into a shad spawn this morning, a late boat draw coupled with dropping water and chilly northeast winds extinguished Lane’s shad spawn hopes.

“I stopped on a place where the shad had been spawning this morning and I could tell it just wasn’t happening,” he says. “The water has fallen about two feet since practice started; there wasn’t even enough water in the grass this morning to keep the lure running right. So I left there and went north fishing some places I had gotten bites in practice.”

From there, Lane estimates he caught about a dozen keepers on the day. His first two fish were a 4-1/2- and a 5-pounder.

“I’m doing what I love to do,” he says. “A swim jig, a frog and flipping. I just wish they would close the dam and back the water up some and give me another shot at those shad spawn fish tomorrow morning. We have a warmer night coming tonight and I’ve got an early boat draw in the morning. If the water would stop falling, I’d like to get off to a fast start with a shad spawn bite and then run my other stuff to see what I could do.”